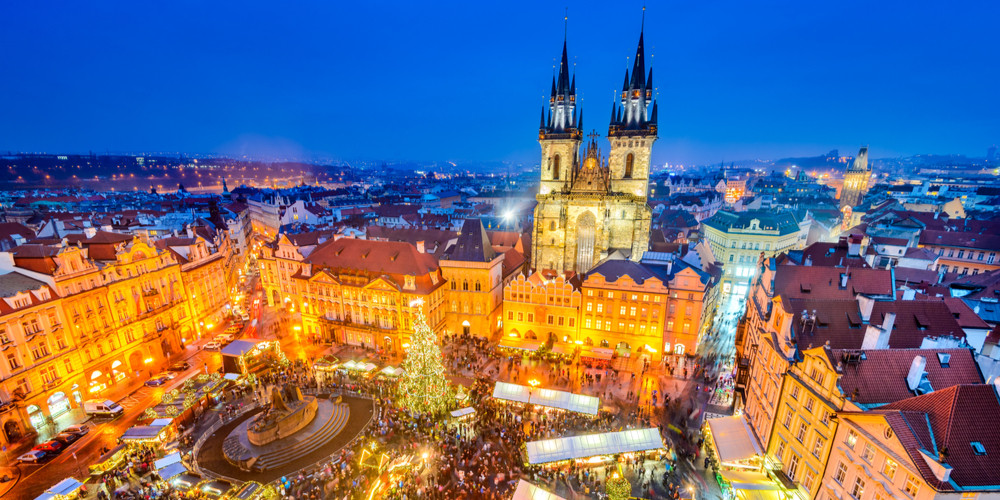 It's that time of the year to book a flight and inform Santa of your plans. Whether you're travelling as a couple or with a group of friends, a Christmas vacation offers a fresh perspective on the New Year ahead, as well as a break from the stress of endless holiday parties and festive dinners. So, what are the best places to visit during Christmas with your family or friends? A cheap Christmas vacation is easy to find if you choose the right destination. It's best to leave before December 24, which is one of the most expensive days to travel, if you want to go against tradition and celebrate the holidays by collecting air miles and creating one-of-a-kind memories.

Cheap places to visit during Christmas are usually full during the holidays but empty in the days leading up to them. They provide discounted rates to guests who arrive early and stay through the holidays. To find the cheapest dates, look through calendars for cheaper flight dates or vacation packages. Begin your search ahead of travel date time to find cheapest options. So, best places to visit during Christmas break:

If you're looking for the best places to visit during Christmas, the Riviera Maya is the place to go. After landing in Cancun, take a 40-minute drive to a more tranquil part of the Yucatan Peninsula. Playa del Carmen and Tulum are two of the most popular resorts and beaches along this stretch.

Riviera Maya has a slew of all-inclusive resorts to help you save money on food while also providing access to water sports to keep you busy. These are especially useful for families travelling with children.

Consider going to Xcaret Park to float down their cavernous lazy river and learn about marine life when you're not playing in the sand or soaking up the sun. You can take a quick trip to Tulum to see ancient Mayan ruins for an educational excursion.

The terrain of this Caribbean country is fascinating and diverse and among the best places to visit during Christmas break. With sandy beaches, rainforests, and savannas, visitors will be wowed in every direction. The scenic Puerto Plata on the north coast has everything you need for a low-cost Christmas vacation.

Puerto Plata is known for its lovely resorts, many of which are all-inclusive and reasonably priced, especially when compared to other Caribbean destinations.

You with your loved ones will enjoy plenty of sunlight, as well as some history, from the expansive beachfront of Playa Dorada to a city centre that dates back to the 16th century.

Devote some time to visit the highly-rated Ocean World Adventure Park, which makes it easy to lose track of the hours with its waterslides, rides, and other attractions.

There's no denying that Prague is a stunning city. This back then troubled Czech Republic capital (communism held sway for years in the lovely city) is now a true gem worth visiting in the list of best places to visit during Christmas.

Those who choose to spend their Christmas vacation here will be enchanted not only by the magical holiday lights and decorations but also by the low prices for things like lodging, food, and flights. Prague is one of the most affordable cities in Europe all year round.

The charming Old Town Square, with its winding cobblestone streets, should be at the top of your list of things to do in Prague. The impressive 14th-century Charles Bridge is a must-see for photographers and romantics alike.

If you're lucky, you might even see some snowfall from the Eastern European December skies while gazing at the Astronomical Clock or staring in awe at the myriad of colourful buildings.

Though many travellers travelling to Southeast Asia must take a long-and sometimes expensive flight, once on the ground, you will be satisfied with the cheap places to visit during Christmas list of Pickvisa!

Rather than dealing with the crowds in Bangkok, travel to Chiang Mai, Thailand's former capital in the north. This vibrant city is a holy land for digital nomads, which could be advantageous for new-ish travellers looking for a taste of home away from home.

Expect to immerse yourself in the rich culture of this destination which was founded in 1296 and where you can find a plethora of temples, hiking trails, food and craft markets, Ladyboy shows, and more. The best part is that you can simply call a tuk-tuk to take you wherever you want to go.

Croatia is quickly gaining the interest of nomadic wanderers around the world, thanks to its beauty, similar to Greece, but at a lower cost. Consider a vacation in Split, Croatia, before prices catch up with their Mediterranean neighbours. The international airport, located on the Dalmatian Coast, makes it simple to fly direct and begin your exploration of this fascinating region.

If you have ever fantasized about riding a camel into the sunset, then it is a chance for you. A trip to Marrakech will expose you to a fascinating, robust, and vibrant culture while also allowing you to cross another continent off your bucket list.

Marrakesh is now the country's religious and economic centre, as well as a tourist destination, thanks to the myriad of winding alleyways that make up the legendary Medina.

It's a good idea to book a few days in the Sahara Desert after you've purchased pottery, textiles, spices, and jewellery to give as gifts back home. There's nothing quite like falling asleep under the African stars and waking up to climb a sand dune to watch the sunset, even if it's a windy eight-hour drive from Marrakech. Don't worry, Santa will definitely find you out here!

Previous generations of travellers and their families may have avoided this South American destination, and the locals are eager to change the world's perception of their homeland. Colombia has continued to transform and unite since the death of the infamous - and destructive - Pablo Escobar, attracting jet-setters to its coffee plantations, rainforests, and more.

Whether you want to spend time in Medellin, surrounded by trees and a bustling culinary and digital nomad scene, in Bogota's high-altitude mountains, or on the beach in Cartagena, most places in Colombia are affordable.

Fun places to visit during Christmase:

In Malta, the nativity scene is an important part of the holiday season. Every year, residents proudly open their shutters and, in some cases, their garage doors to display their holy crib confections to the public.

During Advent (which happens 4 weeks before Christmas), carolers sing outside the Baroque St. John's Co-Cathedral, and a dizzying display of Christmas lights can be found on Republic Street.

Bath, England, is one of the few cities in the world where you can celebrate both the birth of Jesus and the birth of Jane Austen with the same amount of fans, and it is also among fun places to visit during Christmas.

The Jane Austen Centre, which also has a Regency Tearoom on-site, is the best place to learn about the city's most famous residents.

Austen mentions the Theatre Royal in "Northanger Abbey" and "Persuasion," and it offers a diverse program of holiday drama, musicals, opera, and concerts.

The Bath Christmas Market has over 170 wooden chalets selling distinctively British handmade crafts in a quaint Georgian setting. The market, which is located between the trying to impose Bath Abbey and the venerable Roman Baths, is a fun way to learn about Bath's history, as it is the only entire city in the United Kingdom to be identified as a UNESCO World Heritage Site.

Bath on Ice is a great reason to get dressed up and put on your skates.

Thermae Bath Spa is the ideal place to undress and enjoy the steam rising from the thermal mineral-rich waters of an open-air rooftop pool with panoramic views of the city.

Melchior, Gaspar, and Balthazar can be found in Barcelona for those who can extend their Christmas vacation until Three Kings' Day.

They arrive in bearded and velvet-robed splendour at the city's port on the Santa Eulalia, their very own ship, on the evening of January 5. Cannons are fired, fireworks are set off, and the Magi's magic officially begins when the mayor hands them the keys to the city.

They parade through the streets with camels, elephants, giraffes, and dazzling costumes in a magnificent cavalcade of floats.

The Nuremberg Christmas market is a German tradition that attracts over 2 million visitors each year. A giant carved wooden Ferris wheel, an old-fashioned carousel, and a steam train are among the attractions.

Nuremberg's Christmas Market Council is committed to selling only traditional handcrafted toys and holiday items. There are no mass-produced plastic garlands here.

The market's 200 select vendors compete for the Most Beautiful Stall Design award by putting on spectacular displays. The top three receive "Plum People" awards in gold, silver, or bronze.

Quebec is a hive of winter activity, with vacation programs to suit all tastes. It is a haven for environmentally conscious outdoor enthusiasts.

Old Quebec has been transformed into a charming Christmas village. At the German Christmas market, sausage and roast chestnut fans can peruse the wares. A collection of nativity scenes from around the world is on display for the religiously inclined.

Hiking, snowshoeing, and skiing are all available on the nearby Sentier des Caps de Charlevoix.

A snowmobile from Nord Expe is ideal for speed demons.

After Christmas, there's the Quebec Winter Carnival, which runs from February 7 to 16.

Iceland has a few peculiarities when it comes to Christmas celebrations.

For the 13 nights leading up to Christmas, 13 "Yuletide Lads" (scruffy Santas) are said to bring gifts to good children.

The Yule Town Christmas market on Ingolfstorg square in downtown Reykjavik is made up of rows of small, beautiful huts. Visitors can purchase festive Christmas gifts, decorations, and treats at this location.

The shopping varies from day to day because some artisans and designers only set up stalls for a single day.

Northern lights displays, which beam down on a city blanketed in snow and twinkling Christmas lights, add to Reykjavik's festival atmosphere.

In this border city that is influenced by both cultures, you can enjoy Christmas in both French and German flavours.

Strasbourg has transformed into a visual and gastronomic wonderland thanks to a series of themed Christmas villages. There are about 300 stalls spread out over ten different locations.

There's also the OFF alternative Christmas fair, which includes live music and a street art trail in addition to the traditional market.

All your questions related to visas have been answered by our professional workers under the relevant sections of our site. So, feel free to search and if you have any additional questions, ask us - Pickvisa! We will be glad to answer all your questions.