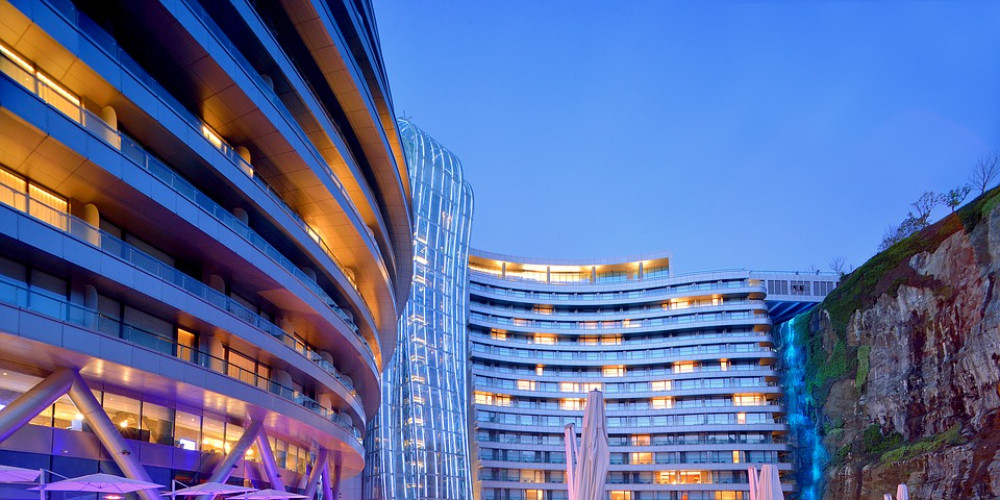 China on the map

The nightlife of Shanghai

In China, which has been able to allocate a significant portion of its accumulated capital, you can often encounter strange and surprisingly innovative architectural projects. One of the last examples of these is the world first underground luxury hotel in Shanghai. We are familiar with "luxury skyscraper hotels", but this is something unique: Groundscraper Underground Luxury Hotel in China!

If you want to travel to China, you should learn more about China and answer the question "How much are hotels in China?"

The People's Republic of China, also known as China, is a developed far east country. China, one of the largest countries in Asia with an area of  9,597 million square kilometers, has many people in the same proportion as its area. It has a population of 1,439,323,776 China people. Chinese is the official language of the country.

If you want to travel to China, you must know about the climate here. The size of the country's surface area is reflected in its climate and weather conditions. There are many types of climates in different parts of the country, including Monsoon, Tropical Savannah, Desert, Arid, and Terrestrial, and the weather conditions of all of them vary by month.

China on the map

To determine the best time to travel to China, you must know which city to go to. If you are going to the capital Beijing, the monsoon climate prevails here. Winters are long and cold. In January, the coldest month, the average temperature is -4°C. Summers are hot, humid, and rainy. The average temperature in July is 26°C.

If you are wondering how many are hotels in China, the average price is very different, from a couple of dollars to a thousand dollars per night. It depends on whether you are staying in a boutique hotel or a luxury hotel.

If we are going to talk about the world first underground luxury hotel, we need to know more about Shanghai. Shanghai, the most important port city of China, has a state system and consists of nineteen regions. Shanghai, also known as 'Shen', reflects both the modern face and traditional face of China as a multicultural city.

Shanghai, which has a long history that became a settlement six thousand years ago, was originally a small fishing village. It was established on the east coast of China, in the delta of the Yangtze River. It became a port city in the 1930s and the first banks started to open in The Bund, which is now located in the Puxi Region.

There are various and different styles of places to visit in Shanghai, which has a remarkable historical texture and dates back to ancient times. Shanghai is in harmony with both its untouched historical face and its advanced modern structure. You can reach anywhere with the developed transportation network in Shanghai.

The best time to travel to Shanghai is between October and November. A light jacket and sweater will be enough for the evenings during this period. However, it is recommended not to visit Shanghai, a public holiday in the first week of October, and attract many Chinese tourists.

The nightlife of Shanghai

Shanghai is taken as the Paris of the east. It has a nightlife full of stylish restaurants, fine dining, and luxury entertainment venues. It has a colorful entertainment world with cinemas showing foreign and Chinese cinemas, opera, dance shows, theater, and acrobatics.

It is known as the city with the most colorful nightlife in China. The number of bars and nightclubs in the city is increasing day by day, and the nightlife is becoming more attractive. Especially in the city where rock and jazz music is popular, there are many foreign and local DJs. China's amazing festival traditions are also reflected in the cultural elements of Shanghai. Shanghai is also home to an underground luxury hotel in China.

If you are doing cultural tourism in a crowded and big city like Shanghai, it is very important to choose a comfortable accommodation facility. There are more than 5,000 hotels in Shanghai to cater to all budgets and tastes.

In 2018, the world's first underground hotel, "InterContinental Shanghai Wonderland," opened its doors to visitors in Songjiang town, which is located in the city of Shanghai and about 35 km from the city center. Called the "wonder of modern architecture", this hotel was built by carving the rocks on an abandoned 88-meter-deep quarry's surface. This hotel is also called the world's first underground luxury hotel. Used during the Second World War, this place was closed in 2000 due to new environmental protection regulations. The transformation started in 2006 when Shimao Group decided to use the deep pit to build a hotel. Since 2006, more than 5 thousand architects, engineers, designers, and workers have taken part in the project to make the interior design of this ground scraper underground luxury hotel in China a reality.

The five-star underground hotel with 18 floors has a total of 337 rooms and suites. At this hotel, guests will witness impressive panoramic views from their rooms' balconies. 16 of the 18 floors are under the ground and the remaining 2 floors are underwater.

In addition to an impressive architectural feat, the building is notable for its environmental impact. The roof of the hotel, which creates its power, including geothermal and solar energy, heat, and lighting, is covered with greenery. Bungee-jumping and climbing opportunities are offered by taking advantage of the hotel's location in a steep pit.

A transparent glass waterfall is at the center of the building, while the guests can watch the waterfalls stretching down from the surrounding cliffs from the balconies of the hotel. In addition to these, the two floors of the hotel, located at the underwater level, host the hotel's restaurant and additional guest rooms opposite the 10-meter-deep aquarium. At the lowest level of this underground hotel, there is a swimming pool and other entertainment facilities.

Atkins, who also designed the Burj Al Arab hotel in Dubai, wanted to push the boundaries with this underground hotel in China. In an interview with China Daily in 2017, Chief Engineer Chen Xiaxiang, who worked on the project, explained that unlike traditional projects where materials are moved up in tried and tested methods, this effort requires unique solutions to achieve the opposite. Xiaxiang described the experience as a "fight against gravity" that eventually enabled the team to register 39 patents.

The chief engineer, who was involved in constructing this underground hotel in China, said that the project was unlike any other. He pointed out that building ventilation, lighting, fire, and earthquake resistance systems are just some of the challenges they overcome. "The problems we managed to solve during construction provided us with the experience that we can better use abandoned natural spaces in the world," he said.

World first underground luxury hotel offers accommodation in Songjiang with a restaurant, fitness center, bar, and garden. The resort has a kids club and a children's playground. With a 24-hour front desk, you can benefit from room service and currency exchange. Free parking is also available here.

All guest rooms have air conditioning, flat-screen satellite TV, kettle, shower, hairdryer, and desk. Rooms with lake views feature a private bathroom with a bathtub and free toiletries. All units have a wardrobe.

Continental and buffet breakfast options are available every morning at this underground luxury hotel in China. Guests of the hotel can enjoy the on-site spa and wellness center, which includes an indoor pool, hot tub, and sauna.

This underground hotel in China is 4.4 km from Sheshan and 4.1 km from Shanghai Playa Maya Water Park. The nearest airport, Shanghai Hongqiao International Airport, is 28 km from the hotel.

To learn more from people who have experience at this hotel, we look at the comments on tripadvisor.com (Average rating: 5.0):

• I went to this underground luxury hotel in China one weekend with my family and found out this property incredible value and service. Thank you again for this unforgettable experience and I will always remember it

• This underground hotel is beautiful and the feat of engineering it took to build this place is amazing. We had incredible food at the Chinese restaurant as well as the seafood restaurant Mr. Fisher. Everyone was lovely, kind, and accommodating. The rooms are beautifully furnished and well-appointed. One of the nest stays in Shanghai yet!

• This hotel is very beautiful, many activities for children, a lot of things to do while you stay here. The hotel also has the water show every 2 hours.

It's always interesting for me to witness something new and extraordinary, and ground scraper underground luxury hotel in China is one of them. Now you know the answer to the question "How many are hotels in China?" and a lot of information about China, especially Shanghai.