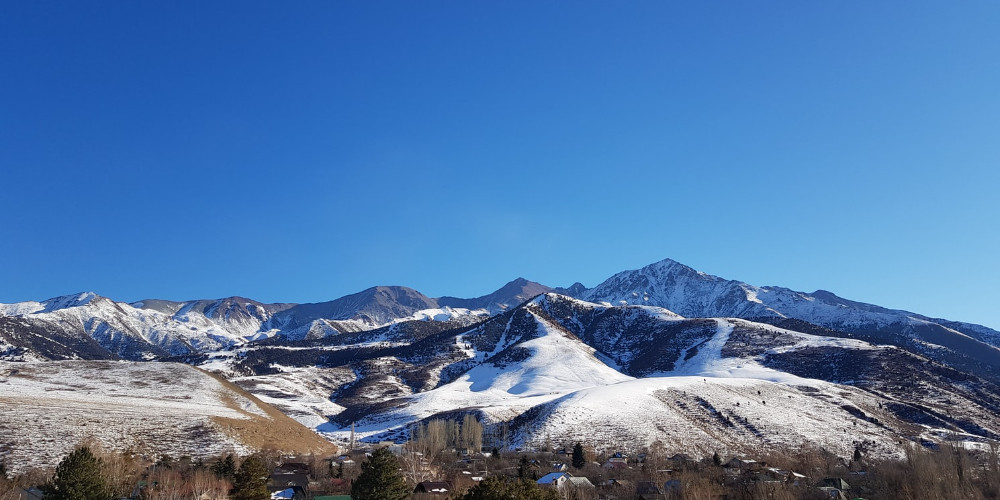 Do you know where is Bishkek? Bishkek is the capital of Kyrgyzstan, which is located at the foot of the Tien Shan mountain range, which is located in Central Asia. From Bishkek, you can easily reach the unique mountain ranges of Ala-Too, which will win your heart, and you can also quickly get to the Ala-Archa National Park, which is known for its wildlife, which is not found anywhere else in the world, and, of course, glaciers.

Today, in this article, we consider the interesting Instagrammable places in Bishkek, where you can create the most liked Instagram photos.

What to see in Bishkek? In fact, Bishkek, aka Frunze in the past, is a small green town.

Ala-Too Square is the main square of the capital of Kyrgyzstan. The well-groomed territory of the central square of Bishkek attracts all residents of the capital, as well as tourists. Companies and families come here to relax and enjoy the good weather. On sunny days, everything is filled with a pleasant floral aroma, and juicy flowers and fountains are turned on.

Ala-Too Square is the symbol and heart of Bishkek, where all tourist excursions and routes start. Wherever you go, sooner or later, you will return to Ala-Too, because, in fact, the heart of Kyrgyzstan, Bishkek, is a small city. All the Instagrammable sights of Frunze can be passed in one day. In the middle of the Ala-Too Square, the national flag rises, and the guard changes immediately. Also, in the middle of the square stands a bronze monument dedicated to Manas the Magnanimous, who is the main hero of the epic "Manas." Moreover, there is a monument to the great Kyrgyz writer Chingiz Aitmatov on Ala-Too Square.

In the southern and central part of the complex of structures, there are buildings decorated with arches. Earlier, or to be more precise – in Soviet times, these buildings housed a knitting factory. Later, after the collapse of the Soviet Union, the buildings were re-equipped for the administrative needs of the city. Near the monument of the national hero, Manas stands the National Museum of the Kyrgyz Republic, as well as the Museum of Applied Arts of the Peoples of All Central Asia and the Assembly of all national diasporas of the Kyrgyz Republic.

At the moment, Ploshchat Ala-Too is not only a favorite place for all citizens but also a venue for all folk and mass festivities on holidays, as well as a venue for all kinds of state-level events.

Moreover, there is an interesting fact about the central square: it is the main scene of all the revolutions that took place in the country, starting from the "Tulip Revolution" in 2005 and the mass riots in April 2010. Therefore, in 2011, a ten-meter bronze statue of the hero of the folk epic – Manas the Magnanimous, who managed to unite the whole of Kyrgyzstan and all the nationalities of the country, was installed on the Ala-Too Square.

Oak Park is one of the oldest parks near the central square of Ala-Too. The park was laid out in 1890, and now the park has grown massive, majestic oaks that cast a thick shadow. In summer, Oak Park saves the residents of Bishkek and all tourists from the heat and also shelters every traveler from the scorching sun.

In 1984, when the capital of Kyrgyzstan was still called Frunze, this park hosted a unique symposium of sculptors dedicated to work and peace. In the park, after the end of the symposium, all the creations and sculptures remained, which marked the beginning of the fact that now in Oak Park there is an extensive open-air sculpture museum. To this day, new works of art appear in it, which delight the eye of anyone who visits the park.

In the autumn, the park has a magical atmosphere of a golden fairy tale. Oaks put on gold, and everything around seems so cozy and romantic.

The gallery is also located in the very center of the city between Ala-Too Square and Oak Park, and this place is called the vernissage, as well as the Bishkek Arbat. The entire alley is strewn with objects of applied art and sculptures, as well as here you can buy national souvenirs. Moreover, the open-air gallery presents bright, insanely colorful paintings by local and very talented artists, and most importantly-here you can order a picture in any style and color scheme. Any custom-made painting can be completed within a different time, starting from a couple of minutes and ending with a couple of hours.

This botanical garden is the largest in all of Central Asia, and in the 1980s, it became the best of its kind in the entire territory of the Soviet Union. On the entire area of 160 hectares, a unique and extensive collection of all kinds of plants was collected, and there were more than 14 thousand species.

In the garden, you can hide from the hustle and bustle of the city and enjoy the silence and sounds of nature. You can find here a unique collection of rare mountain plant species collected from all over Central Asia.

The national park is located near Bishkek, it is only necessary to drive 41 kilometers. "Ala-Archa" is located in the north of the Kyrgyz mountain range at an altitude of up to 4860 meters above sea level. On the entire area of 2,280 hectares, you can find unique flora, virgin nature, and animals listed in the Red Book, such as snow leopards, lynxes, golden eagles, live there.

On the territory of the national park, there is a hotel and a 24-hour point for climbers, as well as a small nature museum.

The excavations of an entire settlement 35 kilometers east of the capital of Kyrgyzstan reveal to the whole world the ancient city of Navekat, which served as the most important transit point on the northern branch of the Great Silk Road, which passed through the Kyrgyz Republic. The city flourished between the 6th and 12th centuries but fell into decline with the attacks of the Mongol horde and was later abandoned.

Today, the ruins of the fortress walls, ceramic water pipes and wells, household items, weapons, dishes, craft workshops, and much more remain throughout the territory of the settlement.

All the findings during the excavations indicate that representatives of various faiths lived on the territory of the city of Navekat: Buddhists, Christians, Muslims, fire worshippers-Zoroastrians and further branches. And in 2014, the ancient city was taken under the protection of the UNESCO World Heritage Organization.

80 kilometers from Bishkek is the oldest Burana Tower, which is one of the most famous archaeological and historical monuments of the Kyrgyz Republic. Here you can find the most important artifacts that tell about the history of the country and the role of Kyrgyzstan on the Great Silk Road.

Burana Tower is a reminder of the ancient city of Balasagun, which was the capital of the Karakhanid Empire in the distant ninth century. Around the tower, during archaeological excavations, brick remains of buildings were found, which indicates that the city of Balasagun was extensive and had shops, bazaars, baths, and craft workshops. Near the tower, you can see a collection of stone idols that were made to honor the memory of the deceased.

30 kilometers from Bishkek is one of the most visited Instagrammable places in the vicinity of the capital – an amazing gorge on the territory of the Kyrgyz mountain range.

At the intersection of four roads, where the small village of Koi Tash is located, one of the roads leads to the gorge. Along the narrow gorge, there is a fast-flowing river, and not far from this place is the sanatorium "Warm Keys."

This gorge is famous not only for its beneficial conditions for the health of visitors but also for its natural landscapes that make everyone who comes here fall in love with themselves.

Located 77 kilometers from Bishkek at an altitude of 1,775 meters above sea level, the Issyk-Ata gorge in the Kyrgyz Mountain Range has been attracting tourists for centuries with its alpine meadows, fruit trees, and hot springs.

There is a legend about a girl who bathed daily in the healing waters of the river, and the powerful power of the mountains preserved her youth, beauty, and health while all her peers grew old.

And the second legend tells about the Uzbek shaman-hermit who lived in the gorge and had the talent to heal the sick.

The gorge itself has long attracted nomads and travelers from different parts of the world, and that's all because the landscapes and healing waters gave strength to everyone who visited Issyk-Ata.

Even further from Bishkek, about 120 kilometers away, is one of the most beautiful gorges in all of Kyrgyzstan. The slopes of the Shamsi gorge are very steep, and in some places, you can stumble upon sharp rocky rocks. The shallow but very rough and fast Shamsi River with crystal clear water flows through the gorge. The flora of the gorge strikes right in the heart with its subalpine meadows, and one part of the gorge consists of spruce and pine forests, which has a beneficial effect on the lungs and respiratory system of a person as a whole.

In addition to all its natural beauty, the gorge has its own secrets and secrets. A golden mask with a female face was found in the gorge, the elders say that this mask belonged to princess Shamsi, after whom the gorge was named.

In addition to all the unique and special beauty of Kyrgyzstan, virgin nature, and mountain expanses, most Instagrammable places are considered therapeutic. Having the health-improving waters of lakes and rivers, fresh air, and the magical atmosphere of Kyrgyzstan can give you an unforgettable vacation filled with warm memories. What is important, in addition to promoting health and active recreation, you can make beautiful shots for your Instagram account while traveling in the Kyrgyz Republic. You can think of a whole photoshoot in the Kyrgyz ethnic style, that is, in a yurt, dressed in national attire. Also, due to the fact that the Kyrgyz are a Nomadic people, you can make a creative shooting with horses of unprecedented beauty, because it is in Kyrgyzstan that a rare breed of Przhevalsky horses is bred.

Despite the fact that Kyrgyzstan is not a particularly large country, almost the entire territory of the state is occupied by mountains, gorges, and canyons. If you rent a vehicle like SUV, you can find hidden corners from prying eyes, which, sometimes, do not even know Kyrgyzstan people. Kyrgyzstan – this is the country where you should get lost among the mountains and lakes, getting more and more unique shots and unforgettable emotions. So get your Kyrgyzstan visa today, enjoy nature, and get the most liked photos!