is a land of rain forests, beaches, crazy festivals, hot dances, and more. Every year more than 6 million people travel to Brazil, and in recent years, there was an increase in tourist numbers. Considering that there are many potential visitors, we decided to give information about one of Brazil's best Instagrammable cities, Rio de Janeiro. In this blog, you will learn where is Rio de Janeiro, what to do in Rio de Janeiro, which are the best places to visit in Rio de Janeiro, where to take most liked Instagram photos and more.  Before starting to talk about 12 Instagrammable places in Rio de Janeiro, let's learn some basics about the city. Where is Rio de Janeiro? The city is located in the southeast of Brazil in the South Atlantic Ocean. Rio de Janeiro is the second-largest city in Brazil and covers 1.255 square km. Roughly 6.7 million people live in the city. What is the official language of Brazil? The official language is Portuguese, and it is only of its kind in South America. Even some people call Portoguesse Brazilians of Europe. The official monetary unit of Brazil is the Brazilian Real. When it comes to religion, most of the Brazilian population believes in Christianity. After getting some basics, it is time to discover the 12 best Instagrammable places on our list.

If we talk about the best places to visit in Rio de Janeiro, we should mention the city's symbol. The statue's designer was French sculptor Paul Landowski, and two engineers Heitor da Silva Costa and Albert Caquot built the symbol of Rio de Janeiro. The figure is 30 meters tall with arms stretching 28 meters and weighs 635 metric tons. It is common to find weddings and baptisms next to the statue. Keep in mind visiting Christ the Redeemer during your travel to Rio de Janeiro and take some of the most liked Instagram photos. You can participate in tours to reach the area easily and learn facts.

Petropolis is 68 km away from the city. Also called "The Imperial City", Petropolis was named after Brazilia's last emperor Pedro II. He built a Summer Palace for him around the area. After him, the country's aristocrats began to build their villas here and made this place an elegant resort. Nowadays, Petropolis is one of the favourite Instagrammable places of tourists because of its beautiful houses and nice climate. Today Summer Palace serves as a museum where you can find many artefacts from the Imperial Era. Other well-known buildings are the Cathedral of Saint Peter of Alcantara, Crystal Palace, and the house of Santos Dumont.

The third Instagrammable location on our list is Lapa Arches. In the 18th century, it was used as an aqueduct (The Carioca Aqueduct) to carry water to the city, but it was shut down at the end of the 19th century. In 1896 the government decided to use it as a bridge for a tramway, which will move between the city centre and Santa Teresa. Unfortunately, there was an accident in 2011, but it still operates. Citizens and guests of the city love to gather here. If you want to have an enjoyable time in Rio de Janeiro, come here at night when the area becomes more alive, and residents sing and dance.

Being at least one time in Rio de Janeiro Municipal Theater will be an unforgettable experience for you. The opera house in the city centre was built at the beginning of the 20th century. Gilded mirrors and marble columns of the neoclassical building will mesmerize you from first sight. A lot of people believe that it looks like an opera house in Paris, which is one of the most beautiful examples in the world. Enjoying performances at least one time would be awesome. Even if you could not find a ticket for performances, take part in tours to see the charming internal design of Theatro Municipal do Rio de Janeiro. I believe that most people will add the opera house to their list before they travel to Rio de Janeiro.

Undoubtedly, Rio de Janeiro beaches are well-known all around the world. The city has many Instagrammable beaches, and I will mention some of my favourites. The first one is Prainha Beach. It is a dream spot for people who search for a calm area next to the city centre. Half-moon shaped beach that is covered by the jungle will give a chance to have a wonderful time in Rio de Janeiro. What to do in Rio de Janeiro, Prainha Beach? One of the best things to do in Rio de Janeiro, Prainha is surfing, but it is recommended for professional surfers. Because the ocean is here known for the strong undertow. Another Rio de Janeiro beach that I want to mention is Barra da Tijuca Beach which is the longest one in the city. When we compare it with Ipanema and Copacabana, it is less crowded. What to do in Rio de Janeiro, Barra da Tijuca Beach? You will find plenty of activities on the beach and around the area. There are many shops, cafes, and restaurants next to the beach. Also, you can play beach volleyball or go surfing with your friends.

Lage park is a charming destination that is surrounded by rainforests and has a cafe, garden, and even a small aquarium. Here you can enjoy the hypnotizing view in the cafe, rest in the garden, observe the aquarium, or discover other worthy visiting spots. One of them is a palace that once belonged to famous opera singer Gabriella Besanzoni and her husband Henrique Lage. Also, there is an art school (Escola de Artes Visuais) where you can watch art exhibitions for free. Another activity to do here is hiking to Christ the Redeemer. You can go there on your own, but the recommendation is to participate in tours because there are some dangerous hiking routes.

As you know, football (soccer) has great importance for the Brazilian population. During your vacation, you will see children, men, women playing football on beaches, streets, and more. As football is so popular in the country, they have many stadiums, and one of the most renowned stadiums is Maracana. Maracana was ready in 1950, and those years' capacity was 200000. Of course, space is much less than before. In 2014 the stadium hosted the FIFA World Cup, and there was some renovation work for the competition. Organizers reduced the stadium capacity to 80000 for safety issues. Finally, I can say that Maracana is one of the best places to capture the most liked Instagram photos during your travel to Rio de Janeiro.

Tijuca National Park has one of the largest urban forest areas in the world. Most of the Tijuca National Park covered by mountains, and one of the best things to do in Rio de Janeiro, Tijuca National Park, is hiking. The most attractive among hiking routes is the journey to Rio's highest peak, the Pico da Tijuca. From that peak, you can observe a breathtaking view of the city and Guanabara Bay and capture some most liked Instagram photos. Interestingly, the forest nearly destroyed because of encroaching coffee plantations. Fortunately, they saved the forest from that disaster by plating more than 9 million trees.

Another example of the places to visit in Rio de Janeiro is Lagoa. It is a very popular neighbourhood. Because Lagoa Neighborhood is the third most expensive neighbourhood to live in South America. another feature that increases the fame of the area is the large lagoon known as the Lagoa Rodrigo de Freitas. It is one of the favourite spots of joggers. Moreover, you will find plenty of open-air cafes and restaurants where you can enjoy delicious cuisine in front of a charming view of the beaches.

12. The whole city during the Rio de Janeiro carnival

is the biggest festival in the world and is held every year. Almost 2 million people join Rio de Janeiro Carnival per year. The first festival took place in 1723, and since that day, it takes place annually. Mostly, the festival starts in February and sometimes lasts till March. Many people believe that festival eve is the best time to travel to Rio de Janeiro. The whole city turns into a big party, and everyone dancing, singing in the streets. The most awaited thing about the festival is the parades. Parades of samba schools have a crucial part in that festival. More than 200 schools that are divided into five divisions take part in the parade.

Topics
Apply for any visa in two clicks!
Cities
Do you want to get a Brazil visa easily?
Get your visa now 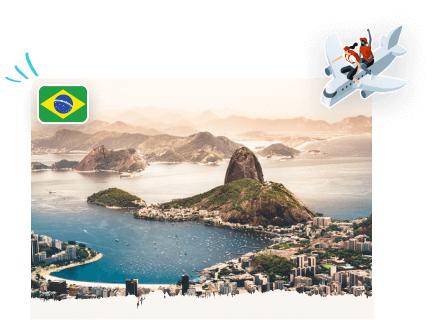