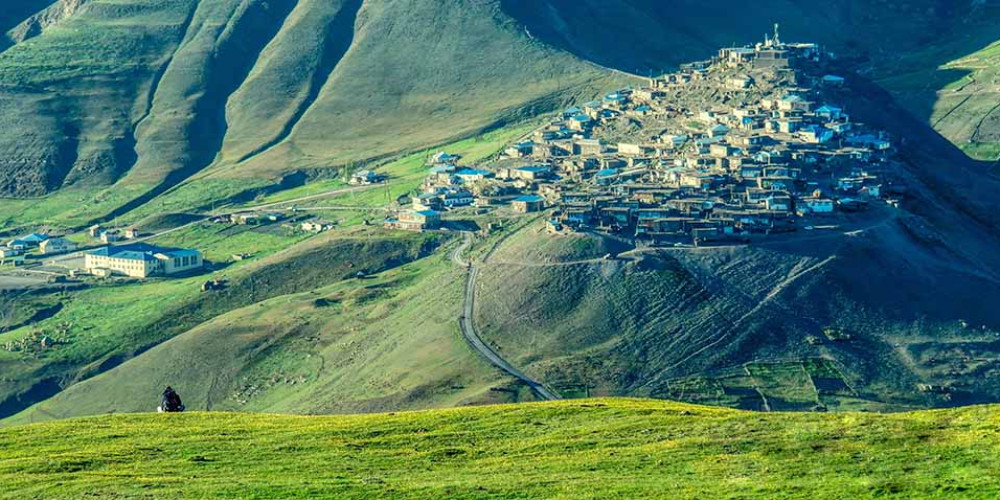 The Guardian: 10 of the best off-grid adventures in Europe: readers’ tips

Where to go in Europe for outdoor adventure?

In 2018, the UK edition of The Guardian published an article titled "Ten of the best off-grid adventures in Europe: readers' tips." The report, based on the readers' comments, published a list of the ten best places for those who would like to experience an unusual adventure in Europe. The Khinalig settlement of Azerbaijan is also included in the list. It is worth to note that not only The Guardian, but many of the world's most influential publications write about Khinalig, and the tourists' interest grows every day. So what makes Khinalig so attractive for both foreign and local tourists? I decided to take a brief tour of the secret to this success. In this blog, I will try to convey to you both my personal experience of Khinalig and the researchers' opinions about Khinalig and its people.

Where is Khinalig located?

Khinalig is the dwelling place on the high hill, surrounded by the mountains, near the Shahdagh, at the bottom between the Main Caucasian and Arm ridge of the Great Caucasus. The village is on the left bank of Kudyalchay. This village is located at 2350 m, 57 km south-west of the centre of Guba, and 225 km away from the capital of Azerbaijan, Baku. Khinalig is the highest and most remote dwelling place of Azerbaijan. At the same time, Khinalig is considered one of the highest settlements in Europe and the world. Although the date of establishment of this settlement is unknown, the history of the Khinalig village is estimated to be around 5000 years. The village population is a little over 2,000 people. The houses in the town have unique architectural features. All of the old houses were built with river stones from Kudyalchay. The roofs of all dwellings are covered by earth with small rocks taken from the surrounding of the village. According to villagers, additional roofing is required every year to protect homes from water in winter. As the houses in Khinalig are close to each other, the roof of one house is almost the yard of another.

Who are the people living in Khinalig, and what makes them so unique?

The people living here are distinguished for their ethnographic features among the minority of Azerbaijan's aboriginals. The Khinalugs are thought to be one of the 26 Albanian tribes living in Caucasian Albania. Due to the series of historical events and displacements, some ethnic names were replaced by current ethnic names. The Khinalugs are known in the ancient and ethnographic literature under the name of "Peoples of the Shahdag." Six other ethnic groups are also included in the list: yergujs, griz, haputs, aliks, dzheks, and budugs. Generally speaking, seven ethnic groups are called "Peoples of the Shahdag" due to their settlement in the foothills of Shahdag. These ethnic groups live in villages of the same name. The majority of these groups are Khinalugs, Griz, and budugs.

In the 40s of the nineteenth century, some budugs and grizs migrated to the plains of Azerbaijan, where they built habitats. The grizs also live in Khachmaz. A small number of Khinaligans live in Guba and other parts of Azerbaijan, but most of them have not left their historical places. The Guba region, which is inhabited by the Khinaligans, is one of the wealthiest areas in Azerbaijan with ethnic diversity. Along with Azerbaijani Turks, there are Tats, Jews, Russians, Lezgins, Ahiska Turks, etc. living here. The first sign that makes the Khinaligans peculiar is their language, which is not spoken elsewhere in the world.

What is the language of the Khinalugs?

In the meantime, I would like to note that Hajibala Badalov provided vibrant and exciting information on language, religion, culture, and ethnographic features, along with the history, ancient development, and the present state of the Khinalig and surrounding Shahdag groups. If you go to Khinalig, be sure to visit the personal home museum opened by Hajibala Badalov regarding the history and ethnography of Khinaligans. The entry is free. In the meantime, they will also give you tea if you "behave well."

There is no dialect or accent of the Khinalig language. The only difference is in the pronunciation of the spoken language, in some cases, between three main generations, living compact in the upper, middle, and lower parts of the village. Many local and foreign experts have studied Katish language. In recent years, a new alphabet consisting of 39 consonants and nine vowels has been developed to facilitate the teaching of the Khinalig language. However, some researchers still emphasize the importance of using 76 letters because of the multisonous of Katish language. The Khinalig language is taught at the secondary schools in Khinalig village.

The main activity of Khinaligans is sheep-breeding. Craft also played an essential role in their lives and culture. Women in Khinalig are mainly engaged in weaving and carpet-making. Recently, the growing interest in Khinalig and a large number of tourists coming here have made it possible for villagers to earn income from these areas. It is possible to get different carpets and clothes they wove. Rural people have been engaged in beekeeping since ancient times.

The Khinalig people have gone through all stages of Azerbaijani history and have survived to this day. Currently, all ethnic groups, including the Shahdag ethnic group, are members of the Sunni sect of Islam. However, their beliefs about nature are reflected in their lives. The faith in Sun and Moon is still preserved. There are many ancient cemeteries around Khinalig. Unfortunately, no archaeological excavations have been done so far to study the history of the Khinalig.

Must see places and do things in Khinalig

The attraction of scientists, artists, poets, and writers to the foothills of Shahdag is not just the language, the alphabet, the traditions of the people living here, but also the fascinating beauty of nature. The Khinalig Territory of Guba District has been declared "Khinalig State Historical-Architectural and Ethnographic Reserve" on December 19, 2007. Khinalig village with old history has its geographical location and unique architectural location. There are museums, fire worshipers temple of the middle age, Khidir Nabi tomb, Sheikh Shahbuz, Abu Muslim Muslim Mosques, caves, and numerous unexplored archeological sites.

One of the most impressive monuments there is Ateshgah. It is located 5 km north of Khinalig at the southern slope of the Heydar Aliyev peak. It is called Ateshgah because it is a burning gas from the ground. Ateshgah is considered a sacred place as the first belief of the people of Khinalig was fire-worship. Ateshgah is of interest and recreational area for ecotourism. The fireplace temple is of particular importance to tourists from India, who are members of the Zoroastrian religion today.

From the village, you can go up the mountain road to the Shah Plateau and climb the Gizil Gaya (3700 meters). One of the closest villages here is Laza, a Lezgi village on the banks of the Gusar River. Thirty kilometres can be reached either by horse or by mountain trail. Khinalig residents can arrange horse rides for tourists to Shah Nabat Plateau, where national wrestling, horse racing, and markets are held. There are also hiking tours to the Griz and other villages from Khinalig.

There is the access road to the Shahdag National Park, with an area of 115,895 hectares, from Khinalig, which makes this village even more attractive for tourists. Khinalig can also be called the place where the mountain and the summit hiking begin. The hiking routes to Bazarduzu, Tufandag, Heydar Aliyev, Ataturk, and other summits organized by the climbing clubs in Baku pass through the village of Khinalig.

Where to stay overnight in Khinalig?

There are several separate guest houses in the Khinalig, and about 20 families welcome the tourists in their private homes. If you decide to stay in Khinalig for a day or more, I recommend staying in private homes. The living conditions in the houses are weak but immaculate and tidy. By staying in private homes, you will get a chance to get acquainted with the lifestyle of the locals and have the opportunity to interact with them. The price for one person, including meals, varies from 40-50 AZN (20-25 euros). There are bathrooms and toilets in such houses. The bath is usually located outside the home. The letters sent by foreign tourists after staying in these houses show that they left with good impressions. Such messages can be found in the home of every Khinalug who had a guest in the home. There is no need to reserve in advance to spend the night in private homes. If you decide to stay in Khinalig, you will find a home to host you. During my visit to Khinalig, I witnessed a high level of hospitality in the house of Zaur Lalayev, the resident of Khinalig.

How to get to Khinalig from Baku, and how much will it cost?

If you plan your trip independently, you can go 167km to Guba city, the central town of Guba region where Khinalig village is located, just for 4 AZN (2 euro) by bus from Baku International Bus Station running every thirty-minute from 7:30 am to 06:00 pm every day of the week. It is also possible to get a taxi for 10 AZN (5 Euro) to Guba city at any time of the day near the January 20 Metro station located in Baku. You can return to Baku by the same route.

The absence of public transport within 57 km from Guba to Khinalig Village makes this trip a bit more adventurous and more enjoyable, mainly because of the asphalt-covered mountain road. There are several ways to go by this route that I want to share with you. So, you can go to Khinalig village by taxi for about 40 AZN (20 Euro) from the "Old bus station" (so-called by the locals) in Heydar Aliyev Avenue in the city of Guba. However, it can be a little challenging to find a taxi to get to this village, at 2,350 meters, especially in cold, windy, and snowy weather.

At the same time, you can go directly to Khinalig from Baku by using the services of numerous tourism companies based in Baku, for example, Backpack Azerbaijan. However, it is vital to plan your trip well in advance. You can also order a taxi directly from Baku to Khinalig village, which will be a little expensive. During my first trip to Khinalig, I travelled to Guba by bus from the Baku International Bus Station, and from there, I went to the village with local Khinaligans who came to the city for the market. One advantage of this way was that I spent less money, and the other was I got acquainted with locals, had an exciting talk on the road, and learned many new things. I will not be mistaken if I say that my way back to Baku from Khinalig was much more interesting than my trip to Khinalig. So, after two days in Khinalig, I was sitting in the village center, watching it and memorizing the beauty here. In the meantime, of course, I was thinking about how to go back. I didn't even think of calling a taxi. When I saw a Niva car moving from the centre, I approached and asked if he was going to the city. He said yes and gave me a ride. Along the way, it turned out that this man was a government official who came to collect a fee for the power in the village. In short, if you are a pedestrian, anyone can bring you back from Khinalig for free. It can even be a tourist who came to Khinalig. If you are lucky, you can also travel to Baku. It should be noted that the construction of a new highway from Guba to these villages has been started due to the increased interest of tourists to Khinalig and Gryz.