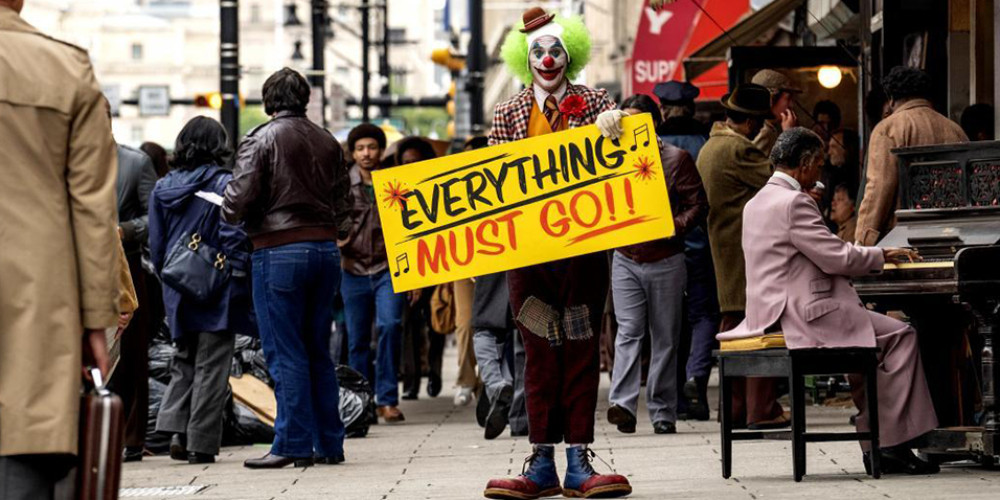 Stories owe their beauty to signs and other stories that outdated them. Every sign is another story. Every story is a sign for an even bigger picture. This one is about Joker the villain. Who is the Joker? What is the Joker movie about? It is about a human being who is forced to become a villain, and he feels that this is his destiny. He dances to his final choice, and while people sitting in the theatre look embezzled, I go back to the origin of Joker and 13 signs that I noticed during the session.

This card was printed in 1863 by Samuel Hart. People called it a wild card. Its purpose was to take down either of Bowers. We are talking about the era of the Civil War in the USA. It is when North and South were fighting each other. Soldiers were killing each other, and when they had off time, they killed time playing the euchre game (Jukerspiele in its original German). This is where the name derived from. The game that deceives. The wild card that kills the Bower. America was divided into two. Years later, this card will inspire a villain to divide Gotham city.

Joker was a card but soon transitioned into a villain. Many tried to tame this psychic character. Ledger was by far the most notable one who went too far. He became the best villain by far. In 2008 he died. Many say he gave his all to Joker. Maybe his soul as well. The second meaning of the word Ledger is a flat stone slab covering a grave. This role put him into a grave. Today if you visit his tomb, you will see the sign of infinity and yin-yang—the endless battle of good and evil.

After Ledger’s death, nothing would be the same. People needed revival. Not a rival but revival. Who played the Joker? There Joaquin Phoenix appeared. Phoenix is a mythical bird that rises from its ashes. Joaquin has mastered his art of creating and terminating characters. He rose again as a Joker. He flew as high as he personally could.

4. Coming up the stairs (Responsibility)

The story of the Joker begins with Arthur carrying his and his mother's burden. He has to make a living. He has to be a decent person. He has to climb those huge, burdensome stairs that take him to his apartment. He is not passionate about it. In fact, he is not happy even for a single minute of a day. But he performs this Draconian routine. Coming up the stairs symbolizes us trying to be obedient citizens. We force ourselves to obey the rules and take responsibility for our actions. If you obey, go and climb the stairs you get to a promised land. You go to Heaven. There is hope. For Arthur, this is the only thing that held him. Hope. His mother reminds him of the glimpse of hope daily.

Part of Arthur’s daily routine is to check the mailbox. His mother, Penny, is with for the email that will change their life in one night. Arthur gave up on the mailbox miracle. He just checks it because of Penny. Box resembles our prayers. Our unregistered prayers hurt our feelings. When we go down the spiral fast, there is no one to speak to. Only God is there. Is God there at all? Does he listen to our prayers? Does he have a plan for us? When is he planning to reply? Will he ever do so?

Penny is Arthur’s source of indirect motivation. He resents his life. At the same time, he has to take of his mother. Mother stimulates his daily responsibilities. She gives hope. She talks about the letter. She is stuck in her own house for years. She became a child herself. Arthur takes care of her. Joaquin is also Hoakim in Hebrew. Hoakim was the father of Mary. Penny resembles Mary that has a child without a father. The child wants the truth about his father. Penny hides the truth. Just when it is nighttime, they both sit and watch Frank Murray, which obviously serves as a role model for Arthur. He dreams about meeting his imaginary father, Murray.

In this new Joker movie, when Arthur learns about his birth father and Penny’s delusional state, he dies inside. There is no hope left. He is betrayed by his own mother. There is no good left. No God as well. God was a delusion. Now comes the true side of life. His childhood traumas. His mother was silent when he got beat down by his biological father. There came a time to silence her forever. He let his past go. He killed his past. There was rain when the truth was revealed. Rain resembled the water for baptizing a child. Arthur was baptized that very night, and he turned Joker.

8. Coming down the stairs (State of Sinful Man)

Nothing is holding Joker anymore. He is coming down the stairs. He is well-dressed and smiling. He is dancing. Steps are free and full of energy. He is about to commit his ultimate sin. He does not feel any responsibility. He is about to come to rock bottom. Two cops chase him all the way to the underground. Everybody is a sinner in this world. Everybody is a clown with a mask. They all have something to hide. Or to hide from someone. They sin and sing with the same passion. There is a carnival under the ground. Those who are forgotten by society are celebrating their planned vendetta. Going down the stairs is also a reminder from the movie Exorcist. The priest who saves a girl takes Satan within and jumps down the stairs to kill him. Joker is happy about Satan. In fact, he is dancing because Satan is happy with Joker. They found something in each other. There is tense energy. This energy will change Gotham city forever.

9. The Bower Card will be taken down

Remember the role of the Joker card? Exactly! Time for Bower to come down. Candidate Wayne is shot dead in front of his son Bruce. (Supposed brother of Arthur). Bruce will take this story to another level. But today, the Bower card is taken down. The wild card has done it. Wayne did not expect this card to be a threat.

10. Frank Murray is the king of comedy

Arthur loved and respected Murray. He wanted to copy Murray’s legacy. Joker movie is symbolic because Robert De Niro had the same ambition in his early movie The King of Comedy. He played a young comedian Rupert Pupkin who took hostage in order to have an appearance in a night show. Guess what Joker will do? Pupkin said it is better to be a King for one night rather than living as a nobody for many nights. Apparently, Joker had the same intention. So we can say Joker followed the steps of the earlier Joker.

11. Dialogue with dad, Dad is dead

Joker imitates Papkin as he sits in front of an audience. Murray is envious of this young man after his confession. People boo him down, and Murray starts his tear down sentiment. Joker is sad because Murray was like a father figure. But Murray made fun of him. This old man did not even listen to a single statement. “If it was me lying dead in the subway, you would pass by,” said Joker with complete confidence. The father image is confronted, and the time has come. Dad is dead. No hostages tonight.

Arthur is in jail. It is rehab time again. His hands are cuffed. He is walking down the white corridor. In this new Joker movie end of the corridor is very symbolic too. There are two directions at the end. Right direction — being good, confessing and trying to come back. Left direction — being bad, keep doing the bad things. Arthur stands for a while and looks in both directions. He picks right. He goes right. Seconds later, he comes running back. Security is chasing him to the left. This is our society and system that always reminds us of our early sins. We chase people to where they were. We do not give them a second chance. So Arthur and the security guy are running at the end of the white corridor. They are almost drawing an infinity symbol with this chase. The battle between good and evil is the infinity war. This was also a woman’s womb in a sense which captivates old stories and breeds new ones.

We either notice and stop or pass by and neglect them. We think there is nothing special. We think people can handle stress, depression, anxiety, panic by themselves. Arthur is a sign. He is in front of us. He is seeking love, attention, understanding and compassion. He is seeking some sign of humanity from us. We cannot neglect Arthur all the time. If we do so, we will have to deal with Joker. And Joker does not joke at all because there is no punchline. Or to be short and sweet: “This is life!” It is impossible to get over this story soon. Story of the Joker will drive many of us to go and see the spots. We will subconsciously immerse into the hunt of emotions that were transmitted from the screen.

Here is a checklist for those who are into another level of experience related to this story. I know that there are plenty of places that you would want to see and immortalize with your camera. So far, I am thinking about two very important spots:  Heath Ledger’s Tomb: People come to pay tribute to Heath and his legacy. He put his everything into this role, and now people come and visit his tomb, which is located at Karrakatta Cemetery and Crematorium, Karrakatta, Nedlands City, Western Australia, Australia.  Joker Stairs: Do most people want to know where are the Joker stairs? The story of the stairs got more acclaim, though. Their location is at 1170 Shakespeare Avenue, Bronx, NY. People officially call them Joker Stairs now. Local people are not happy about the situation, though. People who come to dance like Joker litter the places around.  Note: If you plan to visit Australia or NYC, consider contacting the Pickvisa.com team for visa procedures.