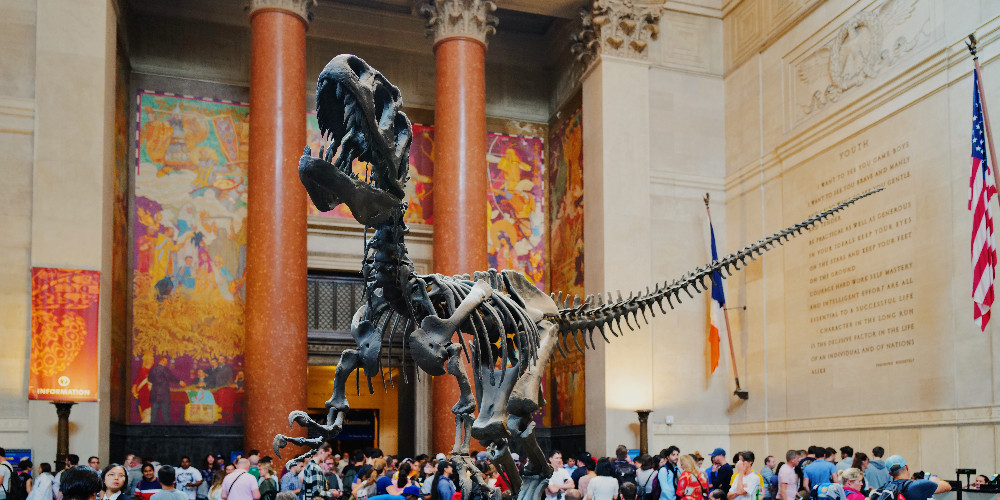 Areas where dinosaur fossils are found

The causes of the extinction of the dinosaurs

It is weird to imagine that dinosaurs, familiar to us from movies or animations, have been walking on the Earth back in times.

The existence of these giant creatures has been known to humanity through the found fossils. When was the first dinosaur fossil found? The dinosaurs were discovered by palaeontologist Richard Owen in 1841 introduced the age of dinosaur in the world of science. More than 850 types of dinosaurs have been found in subsequent studies. Each found dinosaur fossil increased the attention to the dinosaurs, which were fragments of a vast ecosystem that once existed. Their living conditions, the causes of mass devastation, and the time they live are some of the most critical questions that still need to be answered.

The causes of the extinction of the dinosaurs

The most popular theory regarding "what killed the dinosaurs" was put forward in the 1980s. The hypothesis put forward by father and son Luis Alvarez and Walter Alvarez, known as the Alvarez hypothesis. According to them, the gas and soil layer dramatically changed the atmosphere, and climate had been formed as a result of the collision of a large-scale meteoroid with Earth 66 million years ago. It also led to a sharp drop in temperature. These have led to the destruction of much vegetation and the food chain. Failure to meet the giant dinosaurs’ needs for food and heating had reduced living conditions to zero, leading to the extinction of dinosaurs.

The researches carried out underwater, and the centre of a 180-km-large Chicxulub crater formed in the Yukon state of Mexico as a result of the alleged comet strike has revealed several points. Thus, it is assumed that dust and gas eruption occurred during the collision could last for years.

An article published in the journal “National Geographic” in June 2019 contains the latest discoveries from scientists. Besides dinosaur fossil found during excavations in North Dakota, much valuable innovation has been achieved. The remnants of all the existing ecosystems before the mass destruction have been obtained. It has been suggested that the fragments, called tektite, found in the fossils’ layers have only cosmic backgrounds, which were reinforced in the atmosphere and showered on the surface.

Evidence of the facts about dinosaurs listed may still require years of extensive and challenging research. However, visiting the areas where are most dinosaur fossils found is not that difficult. These areas are now open to tourists.

Dinosaur fossils were discovered during excavations in 1933 in Kotelnich, Kirov Area, Russia. Research in a large area 25 km from the Vyatka River, Kotelnich, has given results. The study is still ongoing in Kotelnich, known as the settlement where the first skeleton of Parareptilia was discovered. In 1948, 11 Pareiasaurus skeletons were found in an excavation site covering a 12 km area. This finding has amazed scientists and has been assessed as the ancestor of the giant land turtles today. The exhibits discovered during the research can be found at the Paleontology Museum located in the settlement.

Tanzania is also known as the area where dinosaurs lived. The reason was the discovery of a skeleton of Titanosaurs that lived in the area for 100 million years. The fossils found in the Rukwa Lake basin surprise by the size. For comparison, it should be noted that the size of the discovered skeleton is equal to the size of several elephants. The tyrannosaur is included in the list of plant-eating dinosaurs. The discovery of this kind of dinosaur fossil in Africa was unexpected for the world of science. Also, the fossils of Nyasasaurus have been found in Tanzania. It is well-known that the Nyasasaurus lived in the earliest period on Earth, more than 250 million years ago.

One of the areas where dinosaurs lived is Aksu- Zhabagly Nature Reserve in Kazakhstan. These sites belong to the Jurassic period. It is well known that these areas were once flooded by the Tethys Ocean. The fossils of pliosaurs and flying reptile species have been found here, including the Karatau Lake basin. The fossils are exhibited at the Nature Museum of Kazakhstan. Aksu-Zhabagly Nature Reserve is open to tourists.

Fossils of dinosaurs found in the Gobi Desert are among the most astonishing findings in the world. A dinosaur skeleton was found here as well. Also, the dinosaur egg fossil was first discovered here. It was a great discovery for the world of science. Eggs of almost all dinosaur species were found during the excavation in the Bayanbulag region. The dinosaur eggs found in the Ulanqab region in 1968 were much more extensive. Unfortunately, no embryo has been detected in eggs weighing 1.7 litres.

The Australian fauna is still rich in different animal species. A dinosaur’s upper jawbone has been found in rocks along Victoria’s Gippsland coast. The found kangaroo-size sample belongs to a grass-eating dinosaur- Tyrannosaur. The discovery of Tyrannosaur fossils in the site has undermined several theories, as the scientists have previously assumed that this species lived only in the Northern Hemisphere.

In 2007, another dinosaur fossil pattern was discovered in Queensland, Australia. However, scientists could not refer this sample to any group. This species of dinosaur called “Zach” was dated back to 90 million years ago. Dr Henry explains this situation as it carries the traces of a lost world. It is only the fossils that come to us from this world. An article on fossil analysis published in the journal Paleontology stated that the samples belonged to two-legged, fast-moving types of dinosaurs.

The most striking of dinosaur fossils discovered so far are those found in the Patagonia region of Argentina. Patagonia has large paleontological areas and fossil sites. It is said that the fossils date back to about 90 million years ago. During the study, more gigantic skeletons have been found. It is supposed that the dinosaurs were as tall as the 3-story building. It is one of the three most giant dinosaurs found in the world. In an interview with Reuters, Argentine palaeontologists comment: “This is a new species, a new group. This finding points to a new Titanosaur breed.” During the investigation in Argentina, the fossils of the vast ecosystem were discovered, including the samples of trees, leaves, and various fishes. 70% of the fossils can provide useful scientific information. The examples found here makeup to 10% of the world’s fossils.

The Mesozoic fossils date back to 110 or 130 million years. During this time, some mammals, birds, and plants have been formed. The fossils found in Liaoning survived until today in excellent condition due to the protection of fossils from oxygen in clay and ash layers. As a result, the soft body shapes of the dinosaurs were less decayed. Not only bone but whole skeletons were found there. Some fossils of dinosaurs were in such a good condition that it was possible to determine whether they were male or female.

In 1993, types of dinosaurs called Besanosaur was found in the Besano region of Italy. Ichthyosaur fossils of the Middle Triassic period have been discovered in rock formations. Scientists have done research here using X-ray technology without damaging fossils. In 1996, new examples were found in another Italian city, Saltrio. A species called the Saltriosaur belonged to a class of predators. The fact that the Saltriosaur had three toes on its front legs was also a highlight of the palaeontologists.

A few days ago, at a conference organized by the Thai Department of Mineral Resources, it was announced that other types of dinosaurs had been discovered in the country. Dinosaurs with large teeth, such as sharks, raised great interest. Researchers at the University of Thailand and Fukui Prefecture point out that the species known as Siamraptor dates back to 115 million years ago. The uniqueness of the fossils is that they carry the characteristics of four different dinosaur species.

Research has revealed fossils of dinosaurs throughout the continent. The cause of the extinction of these giants is still not fully proven. But every piece and every dinosaur fossil found brings humanity a little closer to the dinosaurs.

The 20 strangest holidays in the world How to travel internationally with a cat? 5 most bizarre clothing styles representing different countries