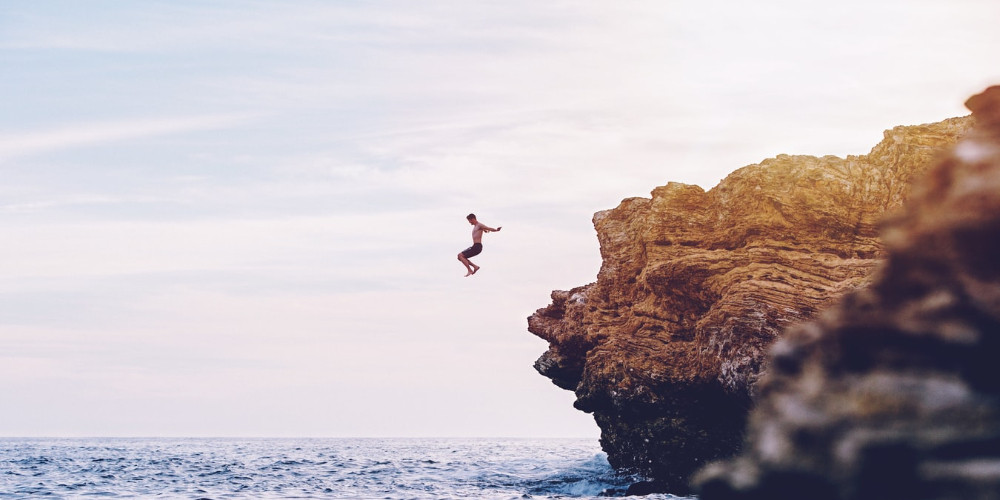 We all have heard about bungee jumping at least once in our life. But what is bungee jumping? Bungee jumping, a choice of adrenaline and extreme adventurers, is famous all over the world today. It is being done by jumping from altitude with elastic rope. The growing interest has turned this extreme tourism into a significant source of income. If you are interested in who invented bungee jumping, this has been first introduced by A.J. Hackett from New Zealand to tourists for income. However, this type of activity that emerged years ago, more precisely in 1970, was increasingly popular among the elite. A.J. Hackett first learned about the characteristics of the bungee, an idea of Oxford University. Department of Dangerous Sports, and was the first one who began to implement it. However, his concept was previously accepted ambivalently. Even New Zealand police have been broadcasting information about the danger of jumping on local TV channels. Nevertheless, all these anti-commercials have made Hackett's idea even more appealing to people. A.J. Hackett was finally able to catch the public's attention with his jump from the Eiffel Tower. As a result, he was able to open a permanent bungee jumping spot in Queenstown. So, where is the most popular place to go bungee jumping? Today, there are dozens of famous bungee jumping places owned by A.J. Hackett in many parts of the world - China, Russia, the US, France, and other countries.

The bridge is 47 meters high and is known worldwide as one of the best places for bungee jumping. The extreme zone opened by Hackett is visited by about 500,000 tourists every year. The fact that this is the first jumping point is one of the reasons why tourists are most interested in.

The 233-meter bungee jumping site on the Macau Tower is the second highest in the world. Currently, it is the highest bungee jumping point in world since the first is closed to the public. People have an adrenaline-filled moment with a 5-second breathtaking jump. Special equipment has been installed to prevent adventure lovers from crashing into the tower. This equipment regulates the rope swinging front and back. The jump is completed at 96 meters to the ground after jumping 228m. Those who want to make a slower jump are also considered. Making a bungee jump from the Macau Tower with a different architectural pattern is another pleasure. So, tourists who travel to China usually visit this place too. Those who do not jump, come here for spectacular views over the Pearl River. And in my opinion, this is the best place for bungee jumping.

The bridge at 321 meters is known as the highest bungee jumping point in world. It takes 5 seconds to jump. The bridge is located on the Arkansas River. It takes courage to jump as it is quite high. This is the best place for bungee jumping in US, although it is not currently open to the public for jumping, it is one of the most visited areas by tourists. In general, the United States is on the list of countries with the most and best places for bungee jumping.

Let's move on to one of the best places in the world for bungee jumping, The Livingston Bridge in Zambia is the ideal spot for the bungee jumping. Adding adrenaline-filled moments to the beautiful scenery of Victoria Waterfront will make the trip unforgettable. The bridge over the Zambia River was built in 1904 and is still in operation. The 111-meter-high bridge is the Victoria Bridge and is located on the border between Zambia and Zimbabwe. Tourists flock here every year for breathtaking jumps. The area with the magnificent scenery, where the bridge is located, as well as the mysterious greenery, is suitable for nature lovers. The fall lasts about 3 seconds.

It is one of the most beloved destinations of the adrenaline-lovers, who want to jump from a 220-meters-high. Perhaps, the movie lovers know better the first reason for the popularity of this place. The film director Martin Campbell filmed some shots of the "GoldenEye" movie from the Agent 007 series in 1996. James Bond (Pierce Brosnan) has jumped from this spot in the first scene of the film. Since then, the region has been visited by many tourists. It is located in the Verzasca Valley, and also known as Contra Dam. It has become the destination for adrenaline lovers due to its favourable condition for the bungee jumping. Jumping from Verzasca, also known for its charming nature, is possible at any time of the day. Those who want to experience it at sunrise and night should reach for their wallet, as the jumps at this time of the day are more expensive than other times of the day. Generally, GoldenEye is popular among extreme sports lovers, as it is one of the famous bungee jumping places.

You can ask: "Where is the most popular place to go bungee jumping in the USA?" The Navajo Bridge, which is for pedestrians in the Grand Canyon National Park, is the most visited area for bungee jumping lovers. The bridge over the Colorado River in Northern Arizona is 142 meters high. The fall from Navajo Bridge lasts for 4 seconds.

The Bloukrans Bridge is located over the Bloukrans River. The bridge is 216 meters high. The bridge considered the best jumping point in Africa, is the fourth tallest bungee jumping spot in the world. The spot is not only suitable for bungee jumping but also an ideal place for nature lovers with its breathtaking views. It is considered the safest bungee jumping point. Although it is open to tourists for jumping since 1990, no serious accidents have yet been reported. So far, over 30,000 tourists have experienced the jumping at the bridge. The jumps are carried out from the particular part on the top of the bridge. The prices are affordable. It is possible to experience the 5-second bungee jump by paying 850 Rand (US$54) if booked in advance, 890 Rand (US$57) if booked on site. Jump price does not include professional photos (200 Rand), and video (300 Rand) provided on an 8G USB, which can be purchased for a combined price of 400 Rand (US$26) after the jump. Let me give you brief information about its history. The bridge was constructed in 1980-1984. Its length is 451m. You will be provided with a certificate "For Bravery" for your courage and video of your jump, upon your request. Moreover, the bridge is also open to tourists who come here to see the spectacular nature.

It takes great courage for the bungee jumping. One of the Chilean travel companies offers great bungee jumping to break the boundaries of courage. The Volcano bungee is carried out by jumping from the helicopter to the active volcano. Though it sounds like madness, there are already hundreds of adrenaline lovers who want to test it. Anyway, don't make your first bungee experience here. You can watch the fire lava by standing 700m away from Villarrica, the active volcano. You can be sure that they will take you away from danger before you pull the rope three times, saying, "I am on fire," as in the fairy tale.

It is translated as the Bridge of Europe. The 200-meter high bridge is one of the highest in Europe. The bridge is used both as a pedestrian way and as a highway. You can get the chance to see the Alps upside down and hear the sound of the vehicles in the background by making the bungee jumping. The jump lasts only for 5 seconds. Europabrucke is considered as one of the famous bungee jumping places yet this is also one of the best places in the world for bungee jumping.

Corinth hosting the Zulu Bungy Festival annually is indispensable for beginners in bungee jumping. It is possible to make the jump from the unique bridge constructed over the canal at 80 meters. The tourists welcome the jumps performed by the sportsmen and bungee jumping lovers participating at the festival. This place is suitable for those who want to gain new experience in jumping. As it is seen from the interesting facts I have mentioned about "bungee jumping,", this extreme type of activity is for those who seek high levels of excitement and adrenaline. Everything will go smoothly if the safety rules are correctly followed. So far, there are no statistics on accidents. However, it is better for people with cardiovascular diseases and those who have excessive anxiety to stay away from the bungee. Those who want to look at the world upside down, "after you."