The first ever visa 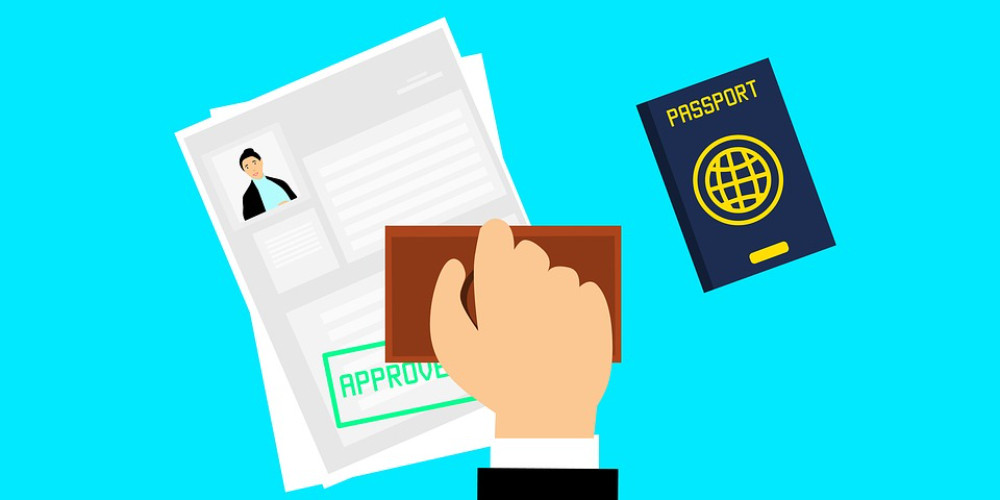 The concept of being under the protection of one ruler while you are on the lands of another has probably existed since rulers and lands were first invented. The earliest mention of an object that we might recognize as a passport appears in the Bible.

In the month of Nisan, in the 20th year of the ancient Persian king Artaxerxes (about 450 BC), a prophet who worked as a royal cupbearer receives letters from the king asking the lands' rulers beyond the Euphrates to grant him safe passage to Judea. The purpose of Nehemiah's visit, by the way, was to restore the walls of Jerusalem.

In Britain, the earliest surviving reference to a document on "safe conduct" appeared during the reign of Henry V in the act of Parliament from 1414. At that time, such documents could be issued by the king to any person, regardless of whether they were English or not. Foreign citizens even received them for free, while English subjects had to pay. For sure, the monarch did not need - and still does not need - a safe-conduct document.

From 1540, the issuance of travel documents became a matter for the Privy Council. The term "passport" was used, although the question of where it came from. So it came from the idea of people passing through seaports or gates in city walls ("ports" in French), which remains debatable. A passport of this period, issued on June 18, 1641, and signed by Charles I, still exists. From 1794, the Office of the Secretary of State took over control of passports' issuance, a function that the Ministry of the Interior retains to this day. Records of every British passport issued from this time remain. However, they were still available to foreign citizens and were written in French until 1858, when the passport first acquired its role as a British identity document. However, passports and the first visas were generally not required for international travel until after World War II.

At the beginning of the 20th century, the history of passports, as we know them today, took on a new turn. The first modern British passport, a product of the British Nationality and Status of Foreigners Act 1914, consisted of a single page folded into eight and kept together with a cardboard cover. It was valid for two years and, along with the photo and signature, had a personal description that included details such as "face shape", "complexion" and "facial features". An entry in this last category might look something like this: "Forehead: broad. Nose: large. Eyes: small." Notably, some travellers have claimed to find it dehumanizing. Following an agreement between the League of Nations to standardize passports, the famous "old blue" was issued in 1920. Apart from a few adjustments to its duration and protective properties, the old blue remained a steady symbol of the traveling Briton until it was gradually replaced by a European version in burgundy in 1988.

Other countries ' passports are remarkably similar to British ones, although some have their own quirks. For example, the new Nicaraguan passport boasts 89 separate security features, including "two-dimensional barcodes," holograms, and watermarks, and is considered one of the least fake documents in the world. The Israeli passport, which has no flaws in its design, should be one of the most useless, since it is not accepted by 23 different Muslim countries, nor by Cuba, nor by North Korea. The Vatican, by the way, does not have immigration control, but issues passports. The Pope, among his other honors, always has a "Passport No. 1".

Passports of the future will use embedded microchips and biometric data, such as photos, fingerprints, and iris patterns. Malaysia was the first country to introduce the technology, and Australia, New Zealand, Japan, Sweden, the United Kingdom, the United States, Germany, the Republic of Ireland, and Poland, among others, have recently followed suit.

Of course, the passport is connected with its direct companion "visa", which also boasts an interesting history.

When were visas first use?

In Western Europe in the late 19th century and early 20th century, first passports and first visas were generally not required to move from one country to another. The relatively high speed and large number of people traveling by train would create obstacles if regular passport control was used. Passports and visas usually became necessary as travel documents only after the First World War.

The free movement of people was a core part of the original Treaty of Rome, and since the early days of the European Economic Community, citizens of the EEC Member States have been able to move freely from one Member State to another upon presentation of their passports or national identity cards. However, systematic identification controls were still in place at the border between most Member States.

Disagreements among the Member States led to an impasse on the abolition of border controls within the Community, but in 1985, five of the then ten Member States - Belgium, France, Luxembourg, the Netherlands, and West Germany - signed an agreement on the gradual abolition of common border controls. The agreement was signed on the boat of Princess Marie-Astrid on the Moselle River near the city of Schengen, Luxembourg, where the territories of France, Germany, and Luxembourg meet. Three of the signatories - Belgium, Luxembourg, and the Netherlands-have already abolished common border controls within the Benelux Economic Union.

The Schengen Agreement was signed independently of the European Union, partly because of a lack of consensus among EU member states on whether the EU had jurisdiction to lift border controls, and partly because those who were willing to implement the idea did not want to wait for others (there was no strengthened cooperation mechanism at the time). The agreement provided for the harmonization of visa policy, granting residents of border areas the freedom to cross the border away from stationary checkpoints, replacing passport control with visual surveillance of vehicles at a reduced speed, as well as vehicle checks that allowed vehicles to cross the border without stopping.

The Schengen Agreement and the Implementing Convention were introduced in 1995 only for some signatory States, but just over two years later, during the Amsterdam Intergovernmental Conference, all member states of the European Union, with the exception of the United Kingdom and Ireland, signed the agreement. It was during these negotiations, which led to the Treaty of Amsterdam, that an agreement was reached on the inclusion of the Schengen set of rules in the main body of legislation of the European Union, as well as on the withdrawal of Ireland and the United Kingdom (which subsequently left the EU in 2020), which were to remain outside the Schengen area. This was the beginning of the first Schengen visa.

Now that the Schengen Agreement is part of the acquis communautaire, for EU members it has lost the status of a treaty that could only be changed in accordance with its terms. Instead, amendments are made in accordance with the EU legislative procedure for EU treaties. Ratification by the signatory States of the former agreement is not required to amend or repeal some or all of the former Schengen codes of law. Legal acts defining the conditions for joining the Schengen area are currently adopted by a majority vote in the EU legislative bodies. New EU member states do not sign the Schengen Agreement as such but are instead required to comply with the Schengen visa rules within the pre-existing EU body of law, which each new member must adopt.

This situation means that States that are not members of the EU's Schengen area have few formally binding options for influencing the formation and evolution of the Schengen Rules; their options are actually limited to agreeing or withdrawing from the agreement. However, prior to the adoption of specific new legislation, consultations are being held with the affected countries.

In 2016, due to the European migration crisis, border controls were temporarily introduced in seven countries of the Schengen area (Austria, Denmark, France, Germany, Norway, Poland, and Sweden).

Since then, Portugal has reintroduced several border checks with Spain, during the UEFA Euro 2004 championship, and during the 2010 NATO Lisbon Summit. The last checks were temporarily introduced at the border from May 10, 2017, to May 14, 2017 during the visit of Pope Francis to Fatima (Portugal).

And now let's go back to the days when the number of countries visited was not measured by photos on Instagram.

Portuguese explorer Ferdinand Magellan is often considered the first person to circumnavigate the world, but the reality of his journey is a little more complicated. Magellan first sailed in September 1519 as part of an epic attempt to find a western route to the spice-rich East Indies in present-day Indonesia. After successfully navigating the crew across the Atlantic Ocean, through the strait in southern South America, and across the vast expanse of the Pacific Ocean, he was killed only halfway through a skirmish with natives on the Philippine island of Mactan. Magellan's death meant that he personally could not circumnavigate the world, but his expedition continued without him. In September 1522, one of his ships returned safely to Spain, completing a successful circumnavigation of the world. Of the 260 original mission crew members, only 18 survived the perilous three-year journey.

If Magellan wasn't the first person to make the first trip around the world, then who was? The most obvious candidate is Juan Sebastian Elcano, a Basque sailor who took control of the expedition after Magellan's death in 1521 and led his only surviving ship, the Victoria, on its way back to Spain. Elcano and his sailors are the first people to successfully circumnavigate the world in a single voyage, but they may not have been the first people to make the first circumnavigation of the world in their entire lives. Opinions differ, but many historians honor Magellan's Malay slave Enrique. Magellan captured Enrique from Malacca while traveling to the East Indies in early 1511, and the Malays later served as an interpreter on a round-the-world expedition to the Pacific Islands. Enrique had previously traveled west with Magellan from Asia to Europe before joining the journey across the Atlantic and Pacific, so by the time the mission reached Southeast Asia, he had almost circumnavigated the globe and returned to his homeland, albeit for several years and during numerous voyages. Enrique left the expedition and disappeared shortly after Magellan's death in the Philippines. By then, it was only a few hundred miles short of its place of origin in Malacca. If he ever returns to his homeland, Enrique may earn true fame for being the first person to circumnavigate the world.