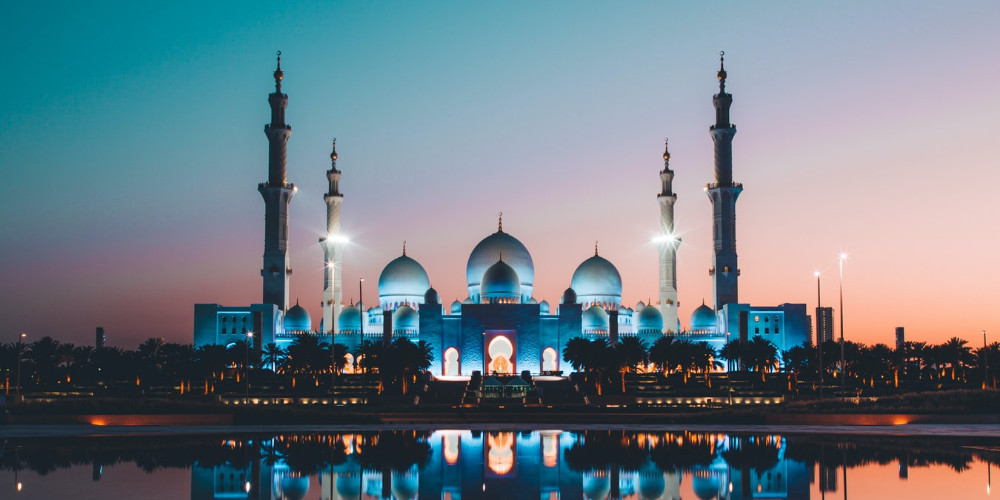 When there is a talk about the holiday in the United Arab Emirates, one city's name is created first. It is Dubai. Tours to Dubai are top-rated in the world, especially on the eve of the New Year. But, there is one wonderful city, at least Dubai, for people who are bored with routine, the same things, and want to try new trip experiences. This great alternative is the second-most populous city of the United Arab Emirates, Abu Dhabi. Abu Dhabi is the capital of Abu Zaby emirate which is one of the United Arab Emirates. Abu Dhabi is situated on an island in the Persian Gulf, off the West Coast, and connected to the mainland by a short bridge. Some people might think, "why to travel to Abu Dhabi" but, in my opinion, it is worth being there at least one time in life to see incredible art and culture, famous tourist places in Abu Dhabi such as Louvre Abu Dhabi. I want to do a little research about the places to visit in Abu Dhabi and Instagrammable places of the city, how to spend unforgettable and interesting time in Abu Dhabi, "what to do in Abu Dhabi?". So who knows, maybe I can persuade you to apply for an Abu Dhabi visa and start making a plan about the travel to this place, just after reading this article. So, let's start right away.

I think Louvre Abu Dhabi will be the most appropriate entrance to the best places in Abu Dhabi. This art and civilization monument is located near the rental apartments in Saadiyat Island, the city's new cultural district, between Zayed Port and Al Jubail Island. The cultural museum represents the blending of French design with Arab heritage. The main reason for this is that it is a project of both and Emirati governments. It is known as the largest museum in the Arabian Peninsula. There are various cultural examples such as photographs, lithographs, artifacts, and scriptures. The most interesting fact about Louvre Abu Dhabi is that it has an ancient falaj water system of Arab engineering. Also, admirable water features, spectacular architecture highlights, and wonderful art make this monument one of the Instagrammable places in Abu Dhabi. On the other hand, learning about art and culture from all over the world, enjoy art galleries, participating in cultural performances, watching film screenings would be perfect offers which you can include in your list of "what to do in Abu Dhabi?".

Another variant to the places to see in Abu Dhabi is the largest mosque in the world, Sheikh Zayed Grand Mosque. This mosque was built in 2007 by Sheikh Zayed Bin Sultan Al Nahyan in remembrance of his father, inspired by the Abu al-Abbas- al- Mursi Mosque, which was found in Egypt, and the Badshahi Mosque, which is situated in Pakistan. Mostly natural materials like marble, gold, ceramics, crystals and semi-precious stones were used to construct the mosque. The originality of this building is because of distinctive architectural styles from different Islamic cultures. Sheikh Zayed Grand Mosque is located on Sheikh Rashid Bin Saeed Street in the Rawdhat Abu Dhabi area. There is the largest loomed carpet in one of the prayer halls. Its impressive landmark the magnificent view can be a wonderful background to your most liked Instagram photo about your travel to Abu Dhabi.

Emirates Palace is among the suggestion of places to visit in Abu Dhabi. This 5-star hotel is considered as most Instagrammable place in Abu Dhabi, with its golden hues, lush landscapes, and wonderful water fountains. It was found on the shores of the Arabian Gulf by the Corniche. If you want to visit this Instagrammable place, you should know that this is one of the city's expensive hotels. The iconic structure of the grand building of the Emirates palace resembles Burj Khalifa in Dubai. Operas and orchestras during the Abu Dhabi Classics concert season and the Abu Dhabi Film Festival are held there. They can help expand your cultural experiences of the city. Besides, you can attend the Barakat gallery exhibiting the fine arts from Egypt, China, Greece, Roma, Africa. Its design is based on Islamic elements architecture and its colors, which remind different Arabian desert shades to give the building a marvelous and Instagrammable atmosphere.

Have you ever heard about the Ferrari world? This theme park is a dream of every car lover. It is situated in Yas Island, east of Abu Dhabi city center, about 20 kilometers away from the airport. It has numerous rides and attractions, such as Tyre Twist, Scuderia Challenge, Rc Challenge, \motor Midway Games, Made in Maranello, and Nello's Adventureland. There are also Ferrari cars, with models dating back to 1947, which would be very interesting for you. So, in my opinion, if you include this destination in your list of places in Abu Dhabi which you want to visit, you will not regret it, and this will cause you to your spending a great time in Abu Dhabi.

The next Instagrammable destination of our observation is Mangrove National Park and situated near Eastern Ring Road. This national park consists of more than half of the total mangrove area. In other words, 75% of its surface is mangrove trees. There are also salt marshes and mudflats home to a wealth of wildlife, such as flamingos, turtles, dugongs, and dolphins. You can catch the most liked Instagram photo of your favorite birds and animals. Also, you can catch a birds-eye view from the luxury of a seaplane and discover some of the best vistas of this natural beauty. So, I think you should add this area to your list of places to see in Abu Dhabi.

If you are looking for a trip to uncover true nature, Liwa Oasis would be a great suggestion among the Instagrammable places in this city far from technology. It is located on the south of Abu Dhabi, on the northern edge of Saudi Arabia's Empty Quarter, the Ruba' Al Khali. This oasis is one of the essential farming production regions of the United Arab Emirates, making it an important part of the country. If you are concerned about "what to do in Abu Dhabi?" you should know that visiting Liwa Oasis will help you gain the opportunity to enjoy camel rides, dune bashing, surfing, and attend bird's eye balloon rides. You also can see Jebel Hafeet peek. You can see that dunes shimmer in diverse shades of pink, apricot, and gold if you pay attention. And, in my opinion, it would be a stunning and unforgettable view. Besides, there are several villages where you feel yourself in the 15th and 16th centuries in the Middle East.

If you plan a peaceful and calm holiday with your family, you should remember Zaya Nurai Island among the places to visit in Abu Dhabi. This island with a marvelous view is located on the Arabian Gulf, east of Abu Dhabi city. Visitors will feel relax with some activities such as going for boot camp sessions, doing outdoor yoga, or just enjoying water sports and reading books. Also, the beauty of its nature will create a great chance to catch wonderful Instagrammable spots.

Visitors traveling with their children, especially those interested in animal life, should choose Emirates Park Zoo among the places in Abu Dhabi. This place is situated in Bahia on the Abu Dhabi – Dubai highway. You can find many different animals like elephants, tigers, giraffes, zebras, and jaguars. There are also observe pools, slides, and waterfalls in this example of Instagrammable places. You can find in Emirates Park Zoo activities such as having breakfast with parrots, giraffes, watching flamingos, big cats, feeding crocodiles will help you have an interesting, fun, and unforgettable time in Abu Dhabi with your family.

Another direction that I can advise you of among the places to see in Abu Dhabi is Etihad Towers. It consists of five original towers, which are classy, modern, and unique. It is located on Corniche Street, opposite the Emirates Palace. Visitors can have a wonderful day in this example to the Instagrammable places in Abu Dhabi by swimming, shopping, dining, and other activities.

During the exhausting work year, tired people should choose Corniche beach among the tourist places in Abu Dhabi. This popular beach is a favorite destination for tourists with its wonderful landscape. It is also known for its Blue Flag status, which is the international eco-label that guarantees clean and safe water. Also, sunset on the beach would give you a great opportunity to take wonderful the most liked Instagram photo.

If you want to go to the past during your travel to Abu Dhabi, you should visit Heritage Village. It is located near Marina Mall, on Abu Dhabi Theatre road. This place is a reconstruction of a traditional village that creates a chance to experience pre-modern Abu Dhabi. You can observe a Bedouin lifestyle with a dash of the campfire, traditional tents made of goat's hair, coffee, and a display of the Falaj irrigation system. Also, some exhibits contain traditional objects and workshops where you can watch craftspeople and participate in the process yourself.

Manarat Al Saadiyat would be a perfect option among the tourist places in Abu Dhabi for art lovers. This building is situated on Sheikh Khalifa Bin Zayed Highway in Cultural District, Saadiyat Island. You can participate in artistic and cultural events and exhibitions where artists from the UAE and other countries represent their artworks. So, you can both spend valuable time there and take wonderful and memorable, most liked Instagram photos. Thus, there are many spectacular places in Abu Dhabi, so if you decide to travel to this Arabic city, you will not regret it.

Topics
Apply for any visa in two clicks!
Cities
Do you want to get a United Arab Emirates visa easily?
Get your visa now 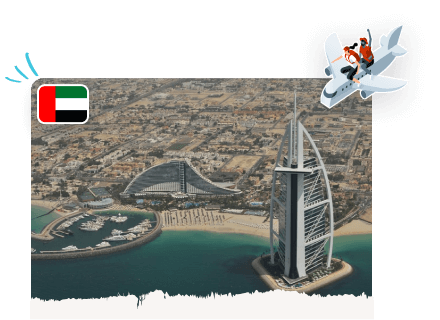