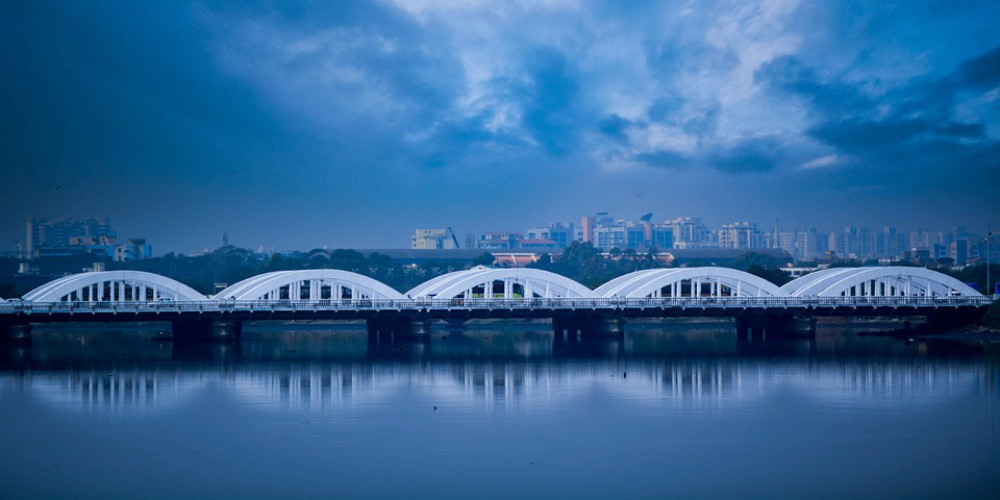 A religious hub like a treasure trove of temples, a home to the second largest beach in the world, the homeland of British colonial architecture, a shelter to the rarest of rare species of animals, the capital city of Tamil Nadu, and the cultural capital of India, Chennai welcomes you with all its might, valour, and colours. The very first question that must have hovered your head like a bee would to a flower would be, where is Chennai? Well, the answer is - Chennai is located in Tamil Nadu, India. If you want the exact directional explanation, then it is situated on the south-eastern coast of India in the north-eastern part of Tamil Nadu. In other words, on the Coromandel Coast off the Bay of Bengal.

Now the next thing on your mind would be Chennai weather. Well, the weather in Chennai is kind of a dry-summer tropical wet and dry climate. The hottest temperature goes up to 45 degrees in May, and the coolest temperature goes down to 14 degrees in December. There are plenty of places to see in Chennai. Especially if you have a soft corner for South Indian food and Instagram. There are so many instagrammable places in Chennai that you would have to buy a new memory card! But before you go and buy a new memory card, let us first fathom the 12 most instagrammable places in Chennai, India.

1. Saunter in the Longest Beach of India - Marina Beach

One of the most instagrammable places in Chennai is a 13-kilometre-long Madras Marina - named by Governor Grant Duff in the year 1884. So long that the golden sands mix with the blue waters of the Bay of Bengal. Counted as the second longest beach in the world after Cox's Bazar Beach in Bangladesh. Your Instagram feed may yearn for the clear waters of Marina Beach as it is one of the best places to see in Chennai. You might want to protect the nests of the Olive Ridley turtles. #TravelPhotography #SouthIndia #StreetPhotography #MarinaBeach #InstaGood #CoastalLiving #VitaminSea

2. Take in Serenity and Peace from Thousand Lights Mosque

Thousand Lights Mosque derives its name from the action of lighting the entire assembly hall during the time for prayers by a thousand lamps. If history interests you, then this mosque here was built by Nawab Umdat-ul-Umrah of the Wallajah dynasty at the end of the 16th century. It is one of the most revered places of Islamic worship, especially for Shia Muslims. Enlighten your soul by taking a snap of thousand lighted lamps here. #ThousandLightsMosque #WhiteMosque #TravelToChennai #MonumentsOfChennai #IncredibleIndia #TamilNaduTourism #TrulyTourism

One of the best tourist places in Chennai is Mylapore. Moreover, it is one of the most instagrammable places in Chennai. Enthusiastic shoppers can delight in silk merchandise, jewellery, fruits, vegetables, and flower shopping. Some of the renowned religious landmarks that came into existence 2000 years ago are present in Mylapore. The narrow lanes of Mylapore showcase picturesque old-style architecture homes. You can get tired of clicking snaps here. From every angle, this city has a different story to portray as there are too many tourist places in Chennai.  #Mylapore #ChennaiTemples #ChennaiPhotography #TemplesOfIndia #PortugueseInvasion #WorldWideHinduTemples #DiscoverIndia

Britishers gave birth to magnificent masterpieces for as long as they were ruling in India. When you travel to Chennai India, you come across a rare tourist phenomenon, wherein you walk admiring British Architecture in the shape of terrific monuments like Central Railway Station, Ripon Building, Southern Railway Headquarters, Victory Memorial, St. Mary’s Church, Napier Bridge, and the University of Madras. Each of them makes a picturesque post for your Instagram feed. #AestheticPhotography #OldCityVibes #BritishArchitectureInIndia #VintageFeeling #StreetsOfInstagram #IndiaPhotography #OldIsGold

For those of you who love cooking and hate it when someone else cooks for you during your travel adventures can take a sigh of relief. When you travel to Chennai, you get to take a private cooking lesson from the locals of Chennai right from scratch. The locals of Chennai enjoy the balance of a complete meal that has flavours, nutrition, pace, texture, and digestive powers. Aren’t you excited to learn and post food pics? For that, you need to know where is Chennai and how to apply for an India visa first. #FoodsOfInsta #ChennaiFood #IndianFoodie #FoodiesOfInstagram #IndianFoodBloggers #HealthyFood #TamilFood

7. Enjoy Travelling Back in Time in 90s Electric Trains

Train journeys never leave you half-heartedly happy; they always have a deeper meaning to share, a story to tell, and a time that never comes back. One of the most astonishing places to see in Chennai is 87-year-old electric trains. They were inaugurated on April 2, 1931, by Sir George Frederick Stanley, the then Governor of Chennai. With wide sliding doors, well-maintained seating arrangement, and thick glass fronts, just recently, the electric trains were refurbished to promote comfortable train travel. Have an amazing snapping moment in there! #ChennaiLocal #TrainPhotography #ElectricTrains #IndianTrains #ChennaiCity #RailwayStation #RailPhotography

Chennai is the heart of temples. One of the most sacred shrines is Kapaleeshwarar Temple in Mylapore. It represents Lord Shiva, named Arulmigu Kapaleeshwarar (Self-manifested), and Goddess Arulmigu Karpagambal (Uma- Shakhti). This temple is about 2000 years old and is the 24th Shiva temple in Tamil Nadu. In front of the statue of the Goddess is a sculpture of a Lion, the mount of the Goddess. Each angle of this beautifully carved temple is photogenic to the camera and enchanting to the eye. One of the most frequent places to visit in Chennai is this temple.  #Mylapore #KapaleeshwararTemple #Pilgrimage #OldCity #HeritageWalk #PhotographyLovers #PhotographySouls

Freedom for nerds who can forget their Instagram account for a while and witness the remarkable creation of Chennai ever since the year 1896 - the Connemara Library. Not just a treasure chest of books, but also newspapers, periodicals, and other related texts. About century-old publications live in the library. The well-kept grandeur of the library makes you want to click its tale’s photos instantly. For avid readers, this library will give a break they need from the city’s bustle. #StateCentralLibrary #ConnemaraPublicLibrary #LibrariesOfIndia #StoriesOfIndia #LandscapePhotography #EgmoreChennai #LibrariesOfTheWorld

10. Take a Tour to the Crocodile Farm in Mahabalipuram

Crocodiles fluster anybody, but what if you were introduced to 14 species of crocodiles, 10 species of turtles, 3 species of snakes, and 1 species of lizard in a controlled environment? Well, that’s what Mahabalipuram’s Crocodile Farm is all about. You won’t leave this farm without feeling exceptionally awed at Mother Nature for its beautiful creations. Just being a fan of #NatGeo won’t suffice, have fun photographing the rarest of rare reptiles. One of the best tourist places in Chennai is this Crocodile Bank. #AnimalLovers #AnimalPhotography #TourismIndia #SouthIndiaTourism #TamilNaduPhotography #Mahabalipuram #TravelTheWorld

11. Go Backwards in Time in the Government Museum of Chennai

If vintage invigorates your nerve cells, then you must visit this Government Museum when you travel to India. Built in 1851, it is the second oldest museum of India, only after the Indian Museum in Kolkata. It is one of the best places to visit in Chennai as it consists of Instagram-worthy rich works of Raja Ravi Varma. It is a vast protectorate of 6 independent buildings having 46 galleries. Driven by archaeological curiosity, right from bronze artefacts to the children’s section, you will find everything here. #GovernmentMuseum #ExploreChennai #ChennaiMuseum #TouristSpot #Egmore #NationalArtGallery #IndoGothicArchitecture

12. Walk on the Broken Bridge of the Adyar River

When you travel to India, you may come across many bridges, but a broken bridge that collapsed in 1977, which you may only find when you travel to Chennai India. Situated in Besant Nagar, this broken bridge makes a perfect abode for uninterrupted photographic memories. On one side, it has a lush green cover and underneath lies the backwaters. You might feel like you are in Europe, but no, you are in Chennai! You can have a ‘Kollywood’ moment here in one of the most amazing places to visit in Chennai. #BrokenBridgeChennai #BrokenBridges #ChennaiPhotographer #Landscape #NatGeoYourShot #NatGeoIndia #PhotographersOfIndia

Chennai is much more than these 12 instagrammable places. Collectively, it is an everlasting ode to spirituality, genuineness, and beauty. Chennai will instil spirituality in you. Somewhere in your heart, you will find a hearth for positivity - exactly something we all need right now when the whole world is battling an abominable spread of COVID-19. Chennai is vast, memorable, and full of mirth. Your phone memory may crash down from all the photos you click on because Chennai is such an awe-inspiring place to sojourn, stay, and survive. Indubitably, Chennai weather has only two temperatures, one is hot, and the other is extremely hot. But the wonders of Chennai will make you forget about the high temperatures. The best time to travel to Chennai India is November to February. When the whole world struggles with cool winters, Chennai weather will not be so cold to you. Have a wonderful time in Chennai when you travel to India!

Apply for any visa in two clicks!
Topics
Cities
Do you want to get an India visa easily?
Get your visa now