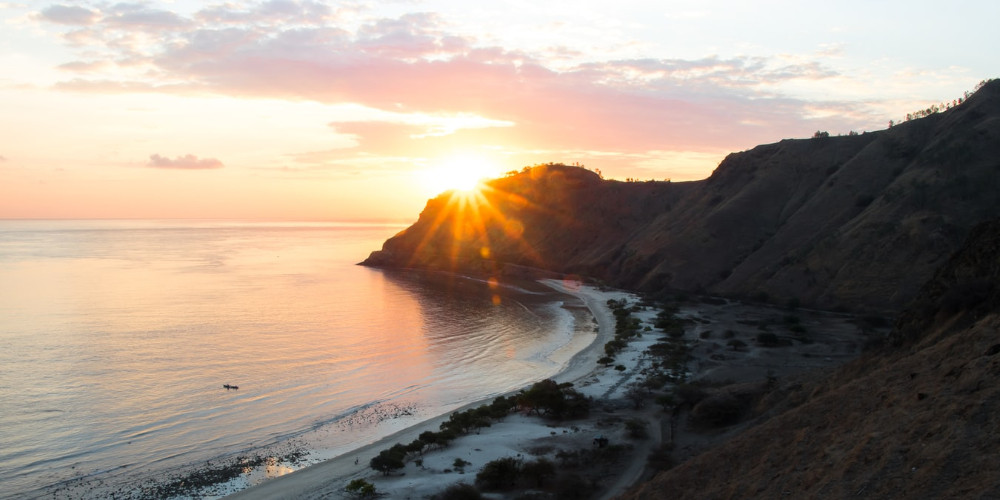 Leave your watch at the hotel in the safe at the reception; you will not need it here. Welcome to the city of Dili – a city on the coast of the sea, or rather the ocean. Green hills and rocky mountains surround it. The second president of this small, cosy country, Jose Ramos-Horta, once proclaimed this city a "City of Peace". This place is rarely mentioned in the world news because of its serenity, tranquility, and measured lifestyle. Standing on the shore of the Pacific Ocean. There are no high-rise buildings, except for the five-story Plaza shopping center, built in the European style. There are no huge factories, traffic jams and human pandemonium. The city of Dili is like one big private sector with lots of greenery and a few people. It can be safely called provincial by the standards of modern capitals, which makes it attractive. That's the beauty of Dili, and of East Timor itself. The Portuguese founded the city of Dili in 1520. In 1769, Dili became the capital of Portuguese Timor. In May 2002, the city became the capital of the independent State of the Democratic Republic of Timor-Leste. It is home to about 200 thousand inhabitants.

East Timor on the map

Do you know where is Dili? East Timor on the map is located in Southeast Asia among the Lesser Sunda Islands. It is washed by two oceans – the Indian Ocean in the south and the Pacific Ocean. East Timor's area is 15.7 km2, the main part of which is occupied by mountains covered with dense forests. There are flat areas only on the coast. Timor occupies the eastern half of the island. The closest neighbours in the middle of the ocean are Australia. By land, the neighbouring state is Indonesia, bordering on the west. East Timor also occupies the small islands of Jacu and Ataura. The island's landscape is quite diverse. The Rocky Mountains that occupy most of the state. The highest point of the Tatamailau mountain system is 2963 meters above sea level. There are waterfalls, Instagrammable coastal lagoons, dense jungles. And higher up in the mountains are sandalwood forests.

The East Timor climate is tropical and usually hot and humid, with the rainy season from December to April. The dry season is from May to November.

The capital of East Timor

– the city of Dili – is located on the island's northern shore of the same name. It has its sea harbour, a modern airport. The capital lives a completely different life than in the generally accepted concepts of metropolitan megacities. Factories do not smoke, there is no traffic collapse, and pedestrians are not in a hurry. The two-story capital of East Timor is a slowly developing city. Clean air, warm sea, friendly inhabitants of the Timorese. The fun part of the East Timor Capital is its public transport – small, colourfully painted minibuses, and most residents travel here on mopeds. And of course, there is a taxi. There are also quite often white UN cars here. It's quiet here. Dili is the capital of one of the youngest states in the world – East Timor, which leaves an interesting imprint on its life with its transition from the past to the future, from kiosks to emerging and trying to be respectable boutiques, updated streets. You notice all this when you walk around the town. It reflected being in long colonization and a long struggle for independence.

East Timor's capital has preserved a very small number of buildings from the time of Portuguese colonial architecture. These isolated buildings are lost in the general mass of traditional and modern architecture, which gives the city a special flavour. An interesting architectural ensemble is the snow-white Church of the Immaculate Conception with sculptures of angels at the entrance and a statue of the Mother of God, which is amazing in its beauty and quality of work. Now the church is the seat of the Roman Catholic diocese. There are not many monuments in the city, some of them very peculiar in their execution. For example, such as the monument of Unification. But, perhaps, the main and revered monument of East Timor's inhabitants is the column of St. Mary. It is considered a kind of talisman. The oldest Roman Catholic church in East Timor capital -"San Antonio de Motael"  is located on the waterfront. As for the embankment, as in most small island cities and island cities, it is the centre where various celebrations and other events occur. And in the morning and evening hours here you can meet lovers of running, cyclists and just unceremoniously strolling people. The western part of the embankment is built up with embassies.

The main street of the Capital of East Timor, komoro road is leading to the local market Malewane. There are hundreds of vendors selling everything from a variety of fresh produce to household items. A special article is a fish. By the way, everything is very good with seafood here! Every morning, dozens of fishing boats return from the sea and bring a fresh catch of fish. In addition to this market, the city has a very small colourful market for Dili and East Timor's decorative arts. Here you can buy traditional souvenirs. But the main thing in this market is handmade Thais fabrics. Each region of East Timor, and by the way there are 13 of them, has its style of Thai execution of these fabrics. Therefore, they are colourful with an intricate pattern and with original ornaments. It is believed that these fabrics are unique.

Walking around the capital

A walk through Largo de Lechidere Park, also located on the beach, along shaded paths among the trees, past local fruit shops, leads to East Timor's Art Society. Here you can visit and explore the exhibition hall, get acquainted with local artists who are very sociable, work right there, draw in various styles of painting, and there is also modern ART art. And the busiest place in Dili is via Vila Verde, which leads to the main Catholic cathedral. From East Timor capital, you can go on a small sea trip to the neighbouring islands. By water taxi or ferry. Where there is only the ocean around, there are almost no people—a place where it is quite possible to feel like Robinson Crusoe for an hour or two. Since the city of Dili is located on the seashore, there are several beaches accordingly. International standards do not equip them; there are no sun loungers, pubs and restaurants, and all their charm lies in the coastline's natural nature. In other respects, you can find other wild beaches with white sand on the coast. It is a perfect Instagrammable place doing nothing for sunbathing and swimming in the sea, for example, beach jesús Backsid beach.

As mentioned above, the city is very measured in its life, and not large, here you can walk quietly, absorbing the tranquillity of island life with a view of the ocean expanses and Instagrammable landscapes of nature. Sit down with a cup of aromatic local coffee, taking a break from the business world's civilisations. Or just drive, so to speak, outside the city in a jeep to the mountains, admire the surrounding beauty of the island and the ocean to the horizon from a height or drive along the coast. Or sit on the beach, meet the sunrise, or spend the sunset setting over the ocean. That's probably all. The suburbs of the capital Dili are mountainous areas. Since East Timor is not large, a trip to the suburbs will not take much time, diversifying travel. Wildlife is very close, almost within walking distance, and without dangerous predators and insects. By European standards, all this can be considered a suburb. Wild jungle in its original form, the villages of East Timor-an interesting topic! Less than half an hour away, and you are in places where time is frozen, and the coolness of the highlands is refreshing. When travelling in the mountains, it is worth visiting the agricultural village of Seloy Kriek with its gardens, lake and rice fields. In the mountains, you can see coffee plantations. In addition to the mountain villages with their traditional buildings and lifestyle, you can see the Village of Iralfai and fishing villages on the coast, living an ocean life.

The main attraction of Dili is the statue of Jesus Christ erected on the Instagrammable cape of Fatukama and the ocean's view from there. It is visible if you look at East Timor on the map. 2. The sea lighthouse in Dili. If you like to travel around the islands and add to the collection of lighthouses in your Instagram. An unavoidable part of all islands. Each island has its lighthouse. 3. Snow-white Gothic cathedral. 4. Veselaya Embankment. 5. Colorful Dili markets. 6. From the fifth floor of the tallest building in Dili, take a panoramic most liked Instagram photo of the two-story capital with a sea harbour and the ocean. 7. Click through the colourful narrow streets of Dili. 8. Visit the House of Artists' Creativity and ART projects and paintings.

9. Of course, this is most liked Instagram photo of sunsets going over the ocean. Well, since everything here is close, and in addition to the capital of East Timor, Dili, I am goint to tell you other interesting Instagrammable places are definitely worth paying attention to. 10. The migration of whales and dolphins, which is spectacular.  11. Selfie in serenity and doing nothing on the beach on the white sand on the island of Atauru. 12. The rarest most liked Instagram photos in Robinson Crusoe's style almost on the uninhabited island of Jaco.

Let's sum up the results

And, as always, finally, East Timor is a beautiful, Instagrammable, tiny and very peaceful country. If you need luxurious beaches with restaurants, boutiques and other charms of the promoted resorts, then you may not be here. And in general, an ordinary tourist can be bored here, there are no special East Timor tourist attractions here. Except for the clear sea and the forested mountains. Friendly and hardworking people. A variety of national arts and crafts. Healthy in all respects organic food. The sun and the sea air, not to mention the clean, healthy saltwater with many minerals in it that a person needs. All this is already enough to visit this place. A tiny country can also appeal to those restless natures who are alien to a measured and serene beach holiday, who want a constant change of impressions, from the depths of the sea to the wild jungle in the mountains. And these same experiences — both good and very good — can be even more than you expect in East Timor. It is what East Timor is like.

Topics
Apply for any visa in two clicks!
Cities
Do you want to get a Timor-Leste (East Timor) visa easily?
Get your visa now 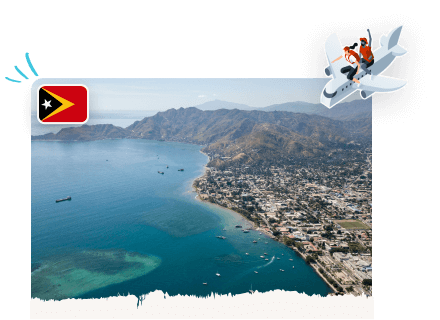