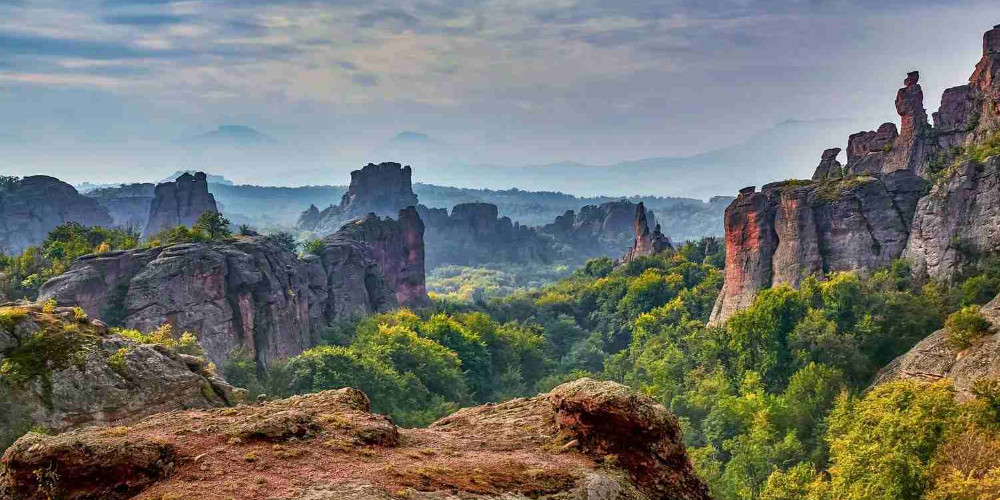 Are you looking for experience or entertainment? Then this is for you! Everyone, at least once in their life, wants to do something completely unexpected and go to an unpredictable place. Maybe Africa? South America? These are all great choices! However, you do not have to go that far to have a different life experience.

Trying new cuisine, interacting with locals, learning new traditions and culture... Sounds great, yes? We have a great offer for you! What about Bulgaria? It's not very far (in fact, they are neighbors with Turkey), it ensures you have a great time and experience! If you want to travel to Bulgaria, if you want to see the magnificent lands of this country, this will be a different but enjoyable experience.

With an area of 110,994 km, Bulgaria attracts many tourists every year with its nature, rich history, and culture. In particular, the capital Sofia is shown as one of Europe's leading cultural cities. Libraries and museums are developing day by day in the city, which accepts many students from different nationalities. Sofia is also the most touristic region in the country. Plovdiv, Kardzhali, Momchilgrad, Varna, Silistra, Vidin, Pleven, Ruse are among the most important cities of Bulgaria.

Where is Bulgaria? Romania surrounds the country in the North, Serbia, and Western Macedonia in the West, Greece, and Turkey in the South, Black Sea in the East. It is one of the countries in the Balkan peninsula.

When is the best time to travel to Bulgaria?

A temperate climate prevails in Bulgaria, which has a variable and mixed climate geography. The average annual temperature hovers around 0°C as the lowest and 22°C as the highest. The summer season in the country starts in June and continues until October, and the temperature level is at normal seasonal levels. When the winter months come, the ski season opens, and tourists from all over the world come to the country. It passes as the ski season between December and March. Ski enthusiasts are recommended to travel to Bulgaria during this period.

Bulgaria has a living space that can appeal to almost every audience. Ski centers provide many opportunities to both citizens and tourists with many beaches opened during the summer period, lively nightlife, and many cultural activities. Especially Sofia is the prominent city of Bulgaria in terms of nightlife. Dinners are served with traditional music and dance performances at the resorts here. In addition, Pamporovo Ski Center is one of the most attractive ski resorts in the world.

Ruse on the banks of the Danube River in Northern Bulgaria is a city that has preserved its importance in every period of history due to its strategic location. It is the 5th largest city in the country. It neighbors the Romanian city of Giurgiu on the opposite bank of the Danube.

The city, which was a complete Turkish city during the Ottoman period, was the center of the Danube province established in the 19th century. During the governorship of Mithat Pasha, the city made great progress. Deliorman and Dobruja regions were also within the borders of this province.

The city, which is the only port of Bulgaria on the Danube, was built on the model of Vienna. Bulgaria became the capital when it was first founded but later changed to the capital Sofia. After the collapse of the communist regime, there was a lot of immigration from here. Because of the migration of 300,000 Turks to Turkey, where the Turkish population was also in a serious decline. Now, you know not only the answer to the question of where is Ruse, but also its short and interesting history.

There are many Ottoman artifacts such as mosques, tombs, baths, fountains, and schools throughout the city and in the city center. Especially, the buildings built in the style of Art Nouveau (an art movement where elegant decorative ornaments stand out, curves, and floral patterns are frequently used) make the city center dazzling.

The Neo-classical Sava Ognyanov Drama Theatre building in Freedom Square was built between 1898-1902 to house local theatre performances. The name comes from the purpose of the building: to provide the board of trustees with the school by renting a theatre hall, library, casino, and shops. Today Dohodno Zdanie is a cultural monument and one of the symbols of Ruse.

The heart of the city beats at Freedom Square. It is very calm and quiet like most places in Bulgaria in general. Ideal for those who want to get away from the noise of big cities and relax. All the places to see and shop are located in this area. There are cafes, restaurants in this square and you can enjoy the end of the day with live music at night! Can this amazing place be considered one of the best Instagrammable places in Ruse?

The Palace of Justice is located in the city center. The park of this Instagrammable place has a beautiful fountain and many places for people to relax.

The Opera, which made its first premiere on April 23, 1919, with Ivan Ivanov's Kamen and Tzena, enables the city to meet art lovers. If you are one of them, you can take your most liked Instagram photo, for sure.

Orthodox cathedral of Sveta Troitsa, also known as Holy Trinity Cathedral, built-in 1632. The Cathedral is the oldest church in the city, so for history buffs, it is one of the best places to visit in Bulgaria.

The house of the writer Zahari Stoyanov (1850-1889), which was turned into a museum, reveals the life of the author and the struggle for independence of the Obretenov family. A must-see place for everyone while their travel to Bulgaria.

The National Museum of Transport, the only transport museum in Bulgaria, was established on the first railway building in the country. The train car used by Tsar Ferdinand (1887-1918) and Boris ІІІ (1918-1943) and the hall wagon of Sultan Abdul Aziz (1830-1876) are exhibited in this museum. This is really one of the most interesting places to visit in Bulgaria.

Orlova Chuka Cave is one of the best Instagrammable places! This is an amazing cave with an extraordinary story! Orlova Chuka is a cave located on the Danube Plain in northeastern Bulgaria. Orlova-Chuka, with a total length of 13 437 m, is the second-longest cave in the country after Duhlata. The cave was discovered in 1941 and opened to tourists in 1957. There are 14 types of bats.

Rusenski Lom Park, which is 20 km away from the city, is located on an area of 3,408 hectares. The ruins of the medieval city of Cherven are also located in this park. If you want to have a great walk in a beautiful place, see the beauty of nature, see nature with some wild animals, you are in the right place! This is one of the most Instagrammable places to visit in Bulgaria.

This place is great for relaxation, entertainment, and fun. This is a very large park with many beautiful views to take stunning photos. It has everything you need for a wonderful day - a park, lakes, cultural monuments, interesting buildings! If you want to have an unforgettable and relaxing day, you should visit this park while your travel to Bulgaria.

We must include this museum in our "Instagrammable places in Ruse" list because the museum offers more than you expect. Magnificent artifacts are exhibited in this museum. These include silver jugs and mugs with pictures of Greek Gods, Roman statues, gold jewelry, and helmets. You can watch a very interesting video about the famous Ivanovo Rock Churches carved into solid rocks with their old painted frescoes.

Finally, I would like to mention interesting festivals worth visiting, which will definitely help you get the most liked Instagram photo.

In the last week of January, interesting masks and traditional clothes are worn at the International Masquerade Games Festival, organized to keep the traditions from Pagan times alive. The festival witnesses colorful landscapes every year.

The Sofia International Film Festival, one of the prestigious film festivals of Southeast Europe, which has opened its doors to many world-famous directors and films since 1997, is held in March.

In the Kukerlandia Festival, where groups presented their performances with handmade "Kuker" masks and bells, the participants draw attention to the clothes they wear and the sounds they make to represent the Thracian warriors. Demonstrators believe that with the loud sounds of copper and bronze bells tied to their belts, they will drive away evil and disease. Kukerlandia takes place in February.

Finally, at the end of your travel to Bulgaria, what are the best souvenirs to buy for family and friends? Roses scented perfumes are famous in Bulgaria. Those who do not use perfume may prefer soaps with rose scents. Bulgaria's famous cheese called Kashkaval is one of the gifts that can be bought on the way back from here.

MOST RECENT
Topics
Apply for any visa in two clicks!
Cities