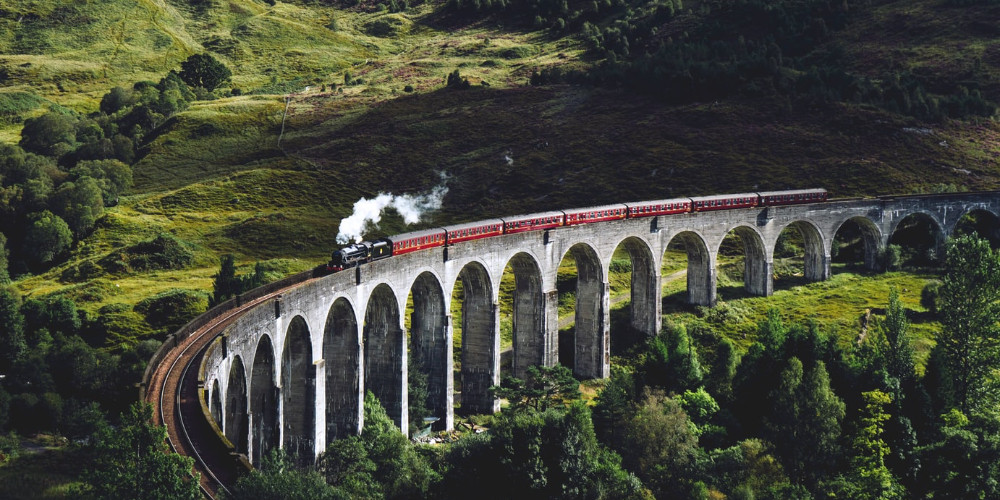 Traveling by train is amazing; I still love them. To travel by train means to see nature, people, cities, and churches, rivers - in fact, it is a journey through life.

Traveling by train resembles a small life... These Instagrammable landscapes, views of the houses of people you don't know, the opportunity to sneak a peek at the streets of passing cities, new acquaintances, light conversations, and a swarm of thoughts under the sound of wheels. Romantic.

If all these feelings can be felt regardless of the route of your railway journey, thanks to the trains listed above, you will live not a small but an endless life full of beauty.

From the world's tallest railway to the oldest named train, these journeys take the scenic route to a whole new level.

From Tokyo to Osaka, Japan: Are you wondering how to get from Tokyo to Osaka? Well, In 1964, the Shinkansen first traveled this route, but today it is possible to repeat the same path of 515 km in just two and a half hours on the super-fast Nozomi, which passes by Mount Fuji. However, no one travels through the Shinkansen to see the scenery, it passes too quickly to appreciate it. Nevertheless, the experience on board the Japanese bullet trains is unparalleled: passengers form a neat queue on the platform, enter simultaneously, and sit in silence throughout the journey, occupied by ekiben. The hybrid of eki, which translates to "station", and bento, which translates to "packed lunch", is unique to each region of Japan, allowing vendors to showcase their signature Japan dishes using local, seasonal ingredients. Stacked in the round, octagonal, and rectangular bamboo boxes, separated by styrofoam or sealed cardboard, each creation is a work of art; mounds of green tea rice are sculpted into flowers, edamame peas are lined up and grated radishes are scattered like snow. Buy a box, sit back, and enjoy the quiet hum as the train goes around Japan.

Ulaanbaatar, Mongolia — Beijing, China: The Trans-Siberian Express from Moscow to Vladivostok considered the "godfather of trains", ranks first in most fans of traveling by train. However, from the point of view of the landscape, the most diverse and beautiful part of the journey is on the trans-Mongolian route, which runs from Moscow to Beijing - in particular, the last segment. As the train crosses Siberia to Mongolia, the land turns into scorched red plains with grassy dunes sloping towards the horizon. You can easily catch the shimmer of lakes and rivers curving towards the paths in the evening light, where the ground burns with a rich orange glow. Waking up in China, passengers can see the Great Wall meandering in the distance as the train rides over steep valleys and orchards, gliding down to the river where fishers squat in wide pants and conical hats.

Cannes, France, Ventimiglia, Italy: All commuter trains run on this route from France to Italy, which starts in Riviera's pristine city and ends in 90 minutes in the beautiful ruined Italian town of Ventimiglia. Skirting the glittering Ligurian Sea curves, the double-decker train rides through lesser-known coastal hideouts such as Cagnes-sur-mer, Juan-les-Pins, and Antibes, carrying passengers through sun-drenched towns and villages where bougainvillea trickles down the walls of pink and yellow apartment buildings and men with orange chests play petanque. Stopping in Nice and Monaco, the train takes travelers within arm's reach of yachts bobbing in the coves, teenagers playing beach volleyball, and Lamborghinis snarling through the streets before approaching the rough-laid hillsides and pulling up at the old Italian train station.

New Orleans to Los Angeles, USA: The oldest named train in America, the Sunset Limited, takes just two days to cross the Deep South from New Orleans to Los Angeles. Find a seat in the panoramic car and get to know the diverse strata of American society-from musicians, teachers, and retirees to farmers, Amish carpenters, railroad workers, and fugitives. Passing by the Gulf of Louisiana, the cacti of New Mexico, and the deep red sunsets of Arizona, passengers have plenty of time to read, play guitar, or watch rabbits and golden eagles soar overhead. And don't forget to bring a few dollars with you when the train pulls into El Paso, where the famous Lady Burrito is waiting for all travelers with a freezer on the platform. Even the Amtrak staff joins the huge queue to try her fabulous chili beef burritos.

Venice, Italy, London, United Kingdom: The most famous train in the world, and one of the best train journeys in Europe, the legendary Orient Express was renamed by Belmond to emulate the Golden Age of Travel. Traveling in private compartments, where mahogany glitters with multi-layer varnish and the beds are covered with damask sheets, passengers can indulge in the old romance of rail travel on the Venetian Simplon Orient Express. Clad in elbow-length gloves and a black tie, you can have lunch during a U-turn through the Italian Dolomites, then watch the Swiss Alps sweep past your windows while dining on chicken oysters and foie gras. Stop at the bar where the piano player plays Moon River, then go to bed and enjoy the sound of the wheels as a cradle.

6. The Road Of Death

Bangkok to Nam Tok, Thailand: During World War II, with the hope of invading India, the Japanese subjected Allied prisoners of war to forced labor by building a section of railway connecting Thailand to Burma. Affected by cholera, beriberi, dysentery, and dengue, people built 257 miles of railroad tracks in fourteen months - 372, including branch lines and sidings - with one death reported for every sleeper laid. The "Death Road" is a beautiful but grim journey that passengers can still make along the remaining stretch from Bangkok Thon Buri train station to Nam Tok Station in Kanchanaburi. Twice a day, the train rattles west through the jungle, colliding with monsoon branches that sweep the windows and come off, scattering twigs down the aisles. Crossing the infamous bridge on the River Kwai, the train rumbles along old wooden trestles, passing tiny, brightly colored stations and hooting its arrival. At the same time, onboard hawkers sell hot noodles, fish pies, and bottles of iced Nescafé.

Xining to Lhasa, China: Few train journeys can take your breath away. Still, as the Qinghai-Tibet railway peaks at more than 5,000 m above sea level, most passengers will experience some altitude sickness on this unusual attraction. Connecting Xinyin in mainland China with Lhasa in Tibet, the world's highest railway runs through territory so treacherous that it was considered an engineering impossibility. Waking up in the morning to the hiss of purified oxygen being pumped into the compartment, passengers pull up the darkened curtain to enjoy views reminiscent of a Rothko painting: a slab of electric blue sky above a block of a yellow plateau. The lakes shimmer like molten metal and yaks graze on the hillsides. As the train ascends, the air becomes thinner and the dust turns to ice, and the blue glow of the Kunlun Mountains approaches the cars. On the descent to Lhasa, the terrain is smoothed out on the slopes, soft as suede, and strange nomad tents with prayer flags flutter in the wind.

Mumbai to Madgaon, India: With the doors open and the warm sea air permeating the passageways, the Mandovi Express takes just under twelve hours to descend the Konkan coast - with the Arabian Sea glittering on one side and the Sahyadri Hills on the other. Departing from Chhatrapati Shivaji Maharaj Terminus in Mumbai at around 7am the train bursts through the metropolis' interior and heads into the countryside, fleeing meters away from children playing cricket and farmers herding their goats. On the descent to Goa, the train is surrounded by coconut groves and palm trees clattering over more than 2,000 bridges, including India's tallest viaduct. First of all, the Mandovi Express has the best larder on the entire Indian Railway network, where you can watch the catering team chop cauliflower and okra amid the roar of karahi roasting fresh bhaji onions. Take advantage of the shepherds walking down the aisles with biryani and reita chicken, spring rolls, and enjoy cup after cup of molasses-sweet tea.

Hanoi to Da Nang, Vietnam: Starting in Hanoi, the "Reunification Express" runs the entire length of the country to Ho Chi Minh City in the south, but the best part of the way is the first half of the road to Da Nang. The railroad was destroyed by American bombs during the Vietnam War but was rebuilt and resumed regular service after the country's reunification in 1976. The train offers a voyeuristic view of the backyards of homes as families relax before going to bed, then step out into the glorious sunshine the next morning. Climbing for miles through the jungle, banana leaves slamming against windows. The train goes inches away from the villagers' walls and gardens, so close that you can make eye contact and wave. On the final leg, the train winds around cliffs overlooking the South China Sea, where a finger of golden sand runs along the water's edge in Lang Ko Bay before finally leaving for Da Nang Station.

From Jasper to Prince Rupert, Canada: The Skiena train (also known as the Rupert Rocket) departs from the Jasper National Park in Alberta, deep into the nooks and crannies of British Columbia, where few Canadians have ever been. The train travels northwest, passing the snow-capped Mount Robson - the highest peak of the Canadian rockies - the Cariboo Mountains and the Douglas Armies, going down the hillsides. Passing along the edge of perfectly still, teal-green lakes under a scorching blue sky, the train allows passengers to observe black bears, white-tailed deer, elk, moose, and bald eagles from the warmth and comfort of the panoramic dome car. Stopping overnight in Prince George, the train passes through the tiny stations of Kwinitsa, Vanderhoof, and Penny-a lodge for less than 10 people and a few dogs-past First Nations reservations, sawmill villages, and freshwater lakes filled with salmon, before eventually arriving in the town of Prince Rupert.