7 top places to visit in Andorra

? Andorra is a tiny principality, which lies in the centre of Europe, between two states: France and Spain. Due to this location, its own unique culture and approach to life have been formed here. The first mentions of the locals can be found in Latin chronicles of the II century B.C. The country's sights correctly show its traditions and rich history. The ruins of Arab fortresses, Roman bridges, and medieval temples have been preserved in this very place up to now. What should you visit in the small Principality of the Eastern Pyrenees? Be sure to visit the local museums and shopping centres, ancient villages and towns that have preserved their unique atmosphere, centuries-old buildings and institutions with excellent Andorra cuisine. Also, Andorra attracts everyone who is not indifferent to skiing - there are a lot of routes with steep slopes. There are no customs duties, taxes and fees in the midget state, so tourists come here just for shopping. Also, among the advantages of the Principality are excellent infrastructure, which meets all the high requirements of the European level. However, the rest here will be much more affordable than at many other resorts in Europe. Are you wondering what to do in Andorra? Well, here are the best things to do in Andorra:

It is worth starting your trip around the country from the historical value of the Principality - the Casa de la Valle (another name is the House of Valleys). This attraction is one of the best places to visit in Andorra. The castle was built in the XVI century in the style of rural architecture. This building since 1702 was intended for the meeting of the Parliament of the city. Until now, it managed to preserve many antique items. Curiously, in the XX century, the building was used at the same time as a temporary residence of the Spanish rival of Andorra - Bishop of Uriel, and in some other rooms, the French school was located. Later, during the reconstruction, the building regained its original appearance. The Dolin house has two floors, an attic and a basement. The mansion is open for excursions, during which you can visit the hall where the council met, as well as go to the kitchen and see various antique utensils. Also, the castle complex includes the Court of Sala de la Justice, the Postal Museum and the Church of San Armengol. However, the interior of this mansion cannot be called luxurious or too expensive, as the building attracts with its unique history.

The tiny Principality is also famous for its small churches and chapels in the Romanic style. In one of the most Instagrammable corners of Andorra, the northern district of Canillo, surrounded by mountains, the highest church in the country is built - the beautiful Church of St. John. This temple got another name, which is most often heard from Andorra's residents - the Church of San Juan de Caselli's. The image of the church is also usually found on local postcards and the covers of travel guides. The centuries-old building (it is believed that the site was built between XI and XIV centuries) has been preserved in excellent condition and today is one of the most visited tourist attractions. Initially, the main church building was built, and a little later, the bell tower was founded. Over the years, both buildings were combined - thanks to this, it was possible to create a single temple complex. You can get to the church through the northern or eastern entrance. Inside is a large number of expensive jewellery and exciting items that have spiritual value. A large fresco, which depicts Jesus Christ, deserves special attention. The painting was made in the XII century. On the walls inside the church, there are elements of the image, created in the XVI century. There is also an altar, built back in 1525. This part of the temple is made in the style of the Renaissance and is dedicated to St. John. The attraction is open to travellers all year round, but in winter, this complex is truly irresistible. Mostly when the first snow covers the roof of the building with a white blanket - all this gives the place a truly unique look.

Incles Valley is one of the best things to do in Andorra. It is one of the privileged natural places that Andorra has to offer its guests. The valley is the most Instagrammable in the country. Even though the highway passes through Inkles, the beauty of nature was not spoilt by human hand. The locals managed to preserve the valley's natural view. You can also stay here for a while in cosy Andorra hotels and go on foot or bike rides, visiting on the way the beautiful lake Jouklar, which is the largest in Andorra. Here you can also climb up to the sky by helicopter and see the natural beauty from a height. The fantastic valley is of glacial origin, so here you can see beautiful alpine meadows and mountain elevations. The best artists from all over the world come to these places to capture the fascinating scenery. You can go to Incles at any time of year - regardless of the season, it is beautiful in its way. However, most tourists choose to visit summer, because during this period it is very comfortable weather for walks and rest. But it should be kept in mind that to protect nature, in summer there are special restrictions on movement by your car. Also in the valley all summer there is a festival with festive demonstrations and concerts.

Among the best places to visit in Andorra, one can't help mentioning the Church of St. Mary's Catholic Church. This attraction is located in the town of Canillo. According to folk legend, the image of the Holy Virgin of Meritcell once accidentally found believers in winter among flowering plants. The idea was brought to Canillo, but after a while, it disappeared from there. Later, it was found at the same place, in greenery. The next time, it was taken to the town of Enkamp, from where it disappeared again. Then, they decided to build a temple of the Virgin Mary Mitchel on that place, which eventually became a religious symbol of Andorra. The church was built in the XVII century, but, unfortunately, was almost destroyed by a fire in 1972 (except for the base of the apse and the facade on the western side). Four years later, the architect Richard Bofill built a new church. However, unlike the old chapel, which was a secluded place of worship, the modern church is open to all foreign visitors. There is also a reproduction of the statue of the Virgin Mary, around which there are images of 7 saints - the patrons of the seven districts of the Principality of Andorra.

In the top places of Andorra can not but include the whole ski area of the Principality of Andorra. Vallnord is famous for its many beautiful views, various slopes and entertainment. Here everyone will find joy for themselves. The site consists of several resorts at once: La Massana: La Massana is the closest ski centre to the capital. The ski elevator will be able to take tourists to the slopes of the resort of Pal. Pal: The resort has wide and long slopes, which are suitable for both professionals and beginners. Arinsal: Here for snowboarders, 24 km of slopes are equipped. It is also interesting because it is divided into tracks and sectors. Here you can find an industry for recreation with the whole family, for professionals and children. Also in Arinsala created excellent conditions for training in alpine skiing. Arcalis: It is the first place to go to enjoy the alpine landscape. Despite the small area, the site has all the advantages of a ski resort. Also, it is most often quiet, and there are no crowds of tourists. In addition to entertainment, in Vnulnord on the slopes, there are various restaurants and snack bars to suit every taste, and some of them offer fascinating landscapes. You can also go to instructor schools, where you can learn skiing or improve your skills in skiing and snowboarding.

Fans of skiing holidays have heard about Andorra more than once. Still, the fact that the capital of Andorra is the city of Andorra la Vella is located an excellent thermal health spa Caldea, probably not everyone knows. Besides, it is the largest in Europe (area of 6000 square meters). Caldea was built in 1994 at the request of the City Hall by the famous French architect Jean-Michel Rouols, who tried to use all the benefits of thermal waters. Thanks to its exciting design, a large amount of entertainment and water quality, it managed to make this complex one of the best in the Iberian Peninsula. Its area has swimming pools with healing fluid from springs, excellent Andorra hotels with comfortable rooms, water slides, Jacuzzi, saunas, cafes, and various entertainment facilities. The guests can spend here both romantic evening and improve their health. Escaldes-Engordany thermal water, which contains a lot of useful minerals, providing healing properties. Moreover, there are over 35 natural springs in the Principality of Andorra, whose temperature is +70 degrees. Caldea health complex is suitable for those who need to restore vitality, relieve stress, have problems with joints and spine or skin diseases. Here you can feel the healing effect of water in all its states.

This unusual museum is located in the seventh district of the Microstate, in the San Julia de Loria region. Tobacco production in Andorra is considered a local landmark, as it is an integral part of life for many Andorians. Here, at an altitude of almost 1000 meters above sea level, only a few factories continue for decades to make the highest quality cigars in Europe. The museum was created by caring locals who diligently collect all information about the tobacco business in the country. In the same way, Andorians collected items for future attraction. Back in 1909, the first tobacco factory in the Microstate of Europe was opened here. It was named the Old Reign, and it is within its walls that the exposition itself is now located. In this place, you can learn all the details of the process, starting with the collection of raw materials in the fields. Visitors will also be told how to create cigars by hand in the past.

The excursion in the museum is exciting and informative. Visitors are offered to go first to the tobacco field and learn about the process of cultivation and collection of plants, as well as the processing of leaves for the next stages. Also, you can see tobacco utensils, devices, techniques and flavourings. In addition to the halls, which contain the main exhibits, there are other rooms for temporary exhibitions. For example, the museum held events, which were devoted to the works of Picasso and Rembrandt. These are not all the places to visit in Andorra. Here you can always choose where to go and what to see. It would help if you only focused on your preferences. Thus, some tourists are attracted by the ancient churches with centuries-old history, which are located in the most Instagrammable places of the country. Others will choose to visit interesting expositions - museums, festivals, various exhibitions and much more.

Topics
Apply for any visa in two clicks!
Countries
Do you want to get an Andorra visa easily?
Get your visa now 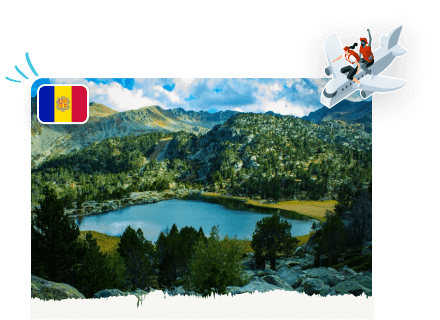