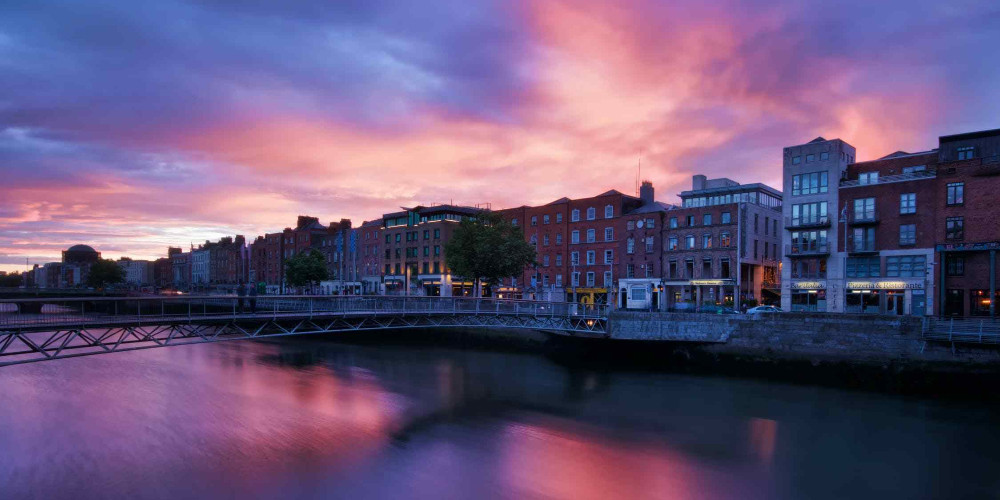 The island of Ireland is only 300 kilometers from east to west, and from north to south is 450 kilometers. In the east, the island is washed by the Irish Sea, in the south, north and west, the Atlantic Ocean washes the island. Ireland is rightfully one of the best places to stay in the world. For good reason, a vacation in this country is really very different from a vacation in the Mediterranean countries. Why? Ireland attracts tourists with the unique splendor of its nature, known worldwide for its beer, its fabulous landscapes and incredible history. The capital of Ireland – Dublin is the centre of cultural, political and economic life in the country, moreover, the state capital of Ireland located on the confluence of the River Liffey in Dublin Bay of the Irish Sea, and is the main port of the country.

The History Of Ireland

The first mention of Dublin was most likely recorded in the writings of the Greek cartographer and astronomer Ptolemy, who mentioned the inhabited area where is Dublin now located. Ptolemy mentioned a Celtic settlement in these territories as early as 140 AD, even though the city itself and its fortress walls were laid much later, around 841. Dublin was the stronghold of a small Viking kingdom until they were driven out by local tribes in 902, but they returned in 917. In 1169, the island was invaded by English troops led by Henry II of the Plantagenet dynasty. King Henry II stormed the walls of Dublin's walled city without much difficulty and declared the city royal in 1171. Already later, during the Tudor period, this dynasty made strenuous efforts to subdue the entire island and its inhabitants, while English society was happy that the native Irish were disarmed and conquered, as well as moving away from Protestantism. In 1592, Queen Elizabeth I founded Trinity College as a Protestant University for Irish society, but Dublin's wealthy families rejected the opportunity to teach their children there, thereby sending their children to study at universities with a Catholic bias. For many years, there were great disputes between the Catholic and Protestant societies, even to the point of wars.

In the capital of the State of Ireland, Dublin, there is one of the oldest historical monuments-Dublin Castle, which was built as a defensive fortress by order of King John the Landless in 1204, after the Norman invasion of Ireland in 1169.

This picturesque place was revealed thanks to the glaciers in the eastern part of the state. This valley is known for its ancient monastery, built in the sixth century.

Museum-manor Muckross house is one of the best places to visit in Ireland. The Macross House Museum and Estate is located in the heart of Killarney National Park. The estate, which has become a museum, is famous for its preserved interiors, unusual architecture, as well as a beautiful garden and arboretum. Every year, this estate hosts various cultural events, concerts and cultural festivals.

St. Stephen's Green is a central park in the capital of Ireland, Dublin, which was created in 1664. The park is famous for its pond with waterfowl and a special park for blind and visually impaired people. Also, in St. Stephen's Green's park, there are many cafes, picturesque walking trails with dense flower beds. By the way, there is also a medical college in the park, which is adjacent to the oldest cemetery.

This is a unique garden and park complex in the country and most often it is called the most important park in Ireland. The castle itself on the territory was built in the thirteenth century and was rebuilt several times, as well as restored. Throughout the park there are many fountains, ponds, sculptures and gazebos, as well as an old tower.

The Anglican Cathedral of St. Patrick is considered the largest and most revered in all of Ireland, and the cathedral is also considered the most beautiful building, having a very strict style. The cathedral is dedicated to St. Patrick, because he freed Ireland from snakes, and also did a lot to form the national consciousness of the entire population of the state.

The museum is considered the most iconic attraction in all of Ireland. The entrance to the museum is absolutely free and at the same time, not only fans of a foamy drink, but also non-drinkers strive to get here. Here you can see an extensive collection of beer barrels, listen to a lecture on the dangers of alcohol, and you can also learn a lot about the history of the brand, traditions and beer culture. The most important and interesting part of the museum tour is tasting various types of fresh beer in the Gravity bar.

The prison was built in the eighteenth century and is now the most famous museum. At one time, Kilmanheim prison held thousands of prisoners, including children from the age of seven, women, and moreover, the fighters for the independence of Ireland were imprisoned there. Where is Ireland and some of its attractions we have reviewed, and in truth, time in Ireland while traveling through it, flies very quickly. The Ireland people are very friendly and cheerful, bright people who will help you immerse yourself in the atmosphere and culture and help you learn the history of the state.

Northern Ireland includes harsh, but very beautiful and Instagrammable landscapes. People from all over the world tend to come here. In the capital, in the city of Belfast, there is a Victorian town hall, built-in 1906. The town hall is located on Donegall Square in the heart of the city. The graceful structure has a copper dome with a height of 53 meters, and under the dome there is a Whispering Gallery. The three-dimensional stained glass windows of the town hall depict various events from the life of the city. The Giants' Road in Northern Ireland is a natural monument formed from 40,000 columns of basalt. Scientists believe that this natural monument was formed due to volcanic eruptions about 50-60 million years ago. The Giants' Road is the most famous and popular place among tourists and is also a UNESCO-listed site. According to local legends, the Road of Giants is an ancient bridge that was destroyed by the fleeing monster Goll.

The avenue of beeches is just over 250 years old. This alley was planted by a family of Stewards to decorate the road that leads to their estate. The crowns of the trees under the influence of time and strong winds intertwined with each other, forming a long tunnel. It is worth coming here in cloudy weather or even at sunset to get into the mysterious atmosphere and mystical mood, as well as tourists, will have the opportunity to make unique shots.

is one of the best places to visit in Ireland. Belfast Castle was built in the nineteenth century on the mountainside and offers an Instagrammable view of the capital of Ireland from a height of as much as 120 meters. The castle was originally located within the city, but after a fire in the eighteenth century, the Chichester dynasty decided to build a castle among the majestic and Instagrammable mountains. In it, everyone can hold events, including weddings. The Belfast Botanic Garden opened in 1940 and covers an area of eleven hectares. A special feature of the garden is the "Palm House" with a tropical climate zone. The attraction of the Botanical Garden is the lily, which bloomed after 23 years of waiting. The Northern Ireland Botanic Garden periodically hosts interesting musical events and famous music groups such as U-2 perform.

The Bridge of Peace, which is located in Derry

The pedestrian bridge was built in 2011 and has this name for a long time. The creation of the bridge symbolizes peace between Protestants and Catholics, connecting the two banks of the river, where representatives of these faiths live. The post stretches from St. Columba's Park to the Guildhall, and the bridge is as much as 235 meters long and has a curved shape. From the bridge, you can clearly see the part of the city that is located on a hill.

The ruins of a monastery near the small town of Downpatrick and a small fragment of the walls of the monastery church itself from the twelfth century is now preserved. Excavations by archaeologists have revealed that Celtic monks lived on the territory and Celtic settlements were located even before the appearance of the monastery.

The castle was built in the eighteenth century on the shore of the lake. By the way, in the courtyard of the castle Ward, scenes of the famous TV series "Game of Thrones" were filmed, where the events in Winterfell Castle took place according to the script. After the series, the number of tourists increased dramatically. The architecture of the castle perfectly combines the style of Gothic and classicism, and on the territory of the castle gardens grow beautiful, fragrant roses and tropical plants. The gardens are made in the Victorian style and have a size of three hundred hectares. Despite the fact that the State of Ireland and Northern Ireland are different Instagrammable places, they are united by great history, many traditions and interesting Northern Ireland culture.

The Irish themselves are a very friendly and hospitable Ireland people and having a cold temperature all year round, their heart is always hot. The representatives of Ireland and Northern Ireland are very kind and will be happy to help you explore their history and the origins of their peoples. By the way, it is very easy to have a relaxed dialogue with them, because it is very easy to get to know them. They have a great culture and tradition of brewing, and they know exactly the subtleties of a successful feast. Natural landscapes truly captivate and enchant everyone who visits Instagrammable places, as well as give a lot of magical emotions and positive memories. In Northern Ireland and in the State of Ireland, you will fully immerse yourself in the historical past, learn more about Celtic settlements and even about the Vikings who once lived in these territories. You can experience all the delights of the coolness of Northern Ireland and the state of Ireland through the warm hospitality and enjoy the Instagrammable scenery, relaxing your heart and soul. You will be warmed by the friendly Irish atmosphere.

Topics
Apply for any visa in two clicks!
Countries
Do you want to get an Ireland visa easily?
Get your visa now 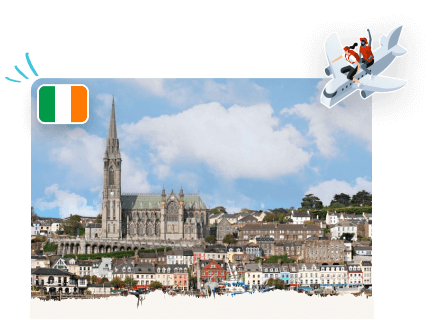