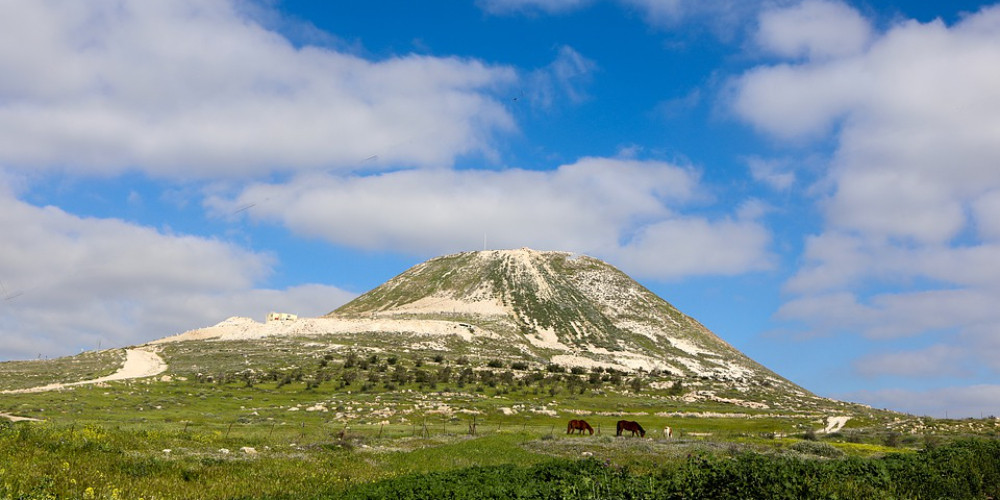 is more than a vacation, a trip, or a pilgrimage. For many, this is an experience with deep meaning. This could be a turning point for many, as they learn about Palestinian society and culture and see the consequences of the occupation for themselves. Before we get to the reasons why you should visit Palestine, let's learn about Palestine's history and origins.

Palestine is an Arab state located in Asia on the eastern Mediterranean coast, which is also known as the Levant. It is bordered to the east by Jordan, to the north by Lebanon, and to the south by the Red Sea and Sinai (Egypt). In the West, the Mediterranean Sea serves as a bridge connecting Africa, Asia, and Europe.

Ancient Palestine included five geographical zones. Four of them run parallel to each other from north to south. A narrow coastal plain runs along the Mediterranean coast. To the east of it is a mountainous region encompassing Galilee, Samaria, and Judea. Further east is the Jordan River Valley and the Dead Sea, a section of an ancient tectonic depression. Further to the east is the Zaiordan Highlands. From the hilly areas of Judea to the south, to the Gulf of Aqaba, stretches the Negev desert.

Palestine on the map

located is in the heart of the Middle East. This strategic position turned Palestine into a way and crossroads of the West for many travelers, as well as a trading center for merchants, from where goods first arrived in Palestine, and from there were transferred to Europe. Palestine is divided into two areas on the map: the West Bank (including East Jerusalem, the capital of Palestine, which is also divided between two cities*) and the Gaza Strip. Think of the West Bank as an island bordering Jordan to the east. Gaza is a thin strip of land bordered by the Mediterranean to the West and Egypt to the south and West.

After the death of Palestinian leader Yasser Arafat in late 2004 and the subsequent election of Mahmoud ABBAS (head of the Fatah political faction) as president of the PA, Israel and the Palestinian people agreed to move the peace process forward. At the end of 2005, Israel unilaterally withdrew all its settlers and soldiers, dismantled its military installations in the Gaza Strip, and relocated its military forces from several settlements in the West Bank, but it continues to control sea and air space and other access. In early 2006, the Islamic Resistance Movement (Hamas) won the Palestinian Legislative Council elections and took control of the PA Government. Attempts to form a unity government failed and violent clashes between Fatah and Hamas supporters ensued, culminating in the violent takeover by Hamas of all military and government offices in the Gaza Strip. Fatah and Hamas have made several attempts at reconciliation, but the groups have failed to elaborate on governance and security issues. In July 2014, Hamas and other Gaza-based militant groups engaged in a 51-day conflict with Israel - the third since the Hamas takeover in 2007-ending in late August with an indefinite truce that continues despite the lack of a negotiated cease-fire and sporadic violations on both sides. Post-conflict reconstruction efforts have been hampered by Israeli restrictions on the entry of goods into the Gaza Strip and insufficient donor assistance. In 2015 The UN has published a study that estimates that the Gaza Strip could become uninhabitable by 2020 if there is no significant easing of border restrictions.

The West Bank, including Napkit and its villages, is characterized by an abundance and variety of plants and flowers due to the climate's diversity. It translates into significant biodiversity, but according to settlement researcher Khaled Maali of Salfit, settlements built only by Jews and the constant levelling of Palestinian land by the Israeli occupying forces have reduced the beauty of nature. Regarding the impact of settlements on the beauty of Palestine and nature in Salfit and the middle West Bank, Maali added: "The settlements have had a huge impact on the diversity of vegetation and biodiversity in the West Bank." Israeli industrial areas have depleted thousands of dunums and the construction of thousands of housing units in settlements, which has expanded at the expense of Palestine nature. Besides, it has polluted the environment and destroyed natural tourist areas such as the Al-Mutawi area west of Salfit, which was once a nature park and was turned into a waste water dump for the Jewish settlement of Ariel." No matter what your beliefs or beliefs, no matter what your politics, no matter if you are an experienced traveller or have never left the place you call home, everyone can find some purpose and meaning in travelling to the Holy Land. Here are six great reasons to come to Palestine, along with four reasons or cautions to consider before travelling.

So much can be learned and understood by watching the 6 hours news or reading the history of Palestine books about the Israeli-Palestinian conflict. It is why fact-finding missions in the Middle East are so important and are often described by all visitors as "life-changing". By visiting the region and participating in special programs, you will learn a wealth of information about the structure and implementation of the military occupation, how it has evolved and evolved in a way that affects all aspects of Palestinian life. You will have the opportunity to meet with Palestinian and Israeli peacemakers: people who have dedicated their lives to bringing peace and justice to the Holy Land and all its peoples.

2. You will support the Palestinian economy

Closing borders and checkpoints stop or slow down business and trade. The Palestinians denied access to their lands and their resources, often confiscated by Israeli businesses backed by their Government and military, have experienced the destruction of the Palestinian economy and reduced prospects for prosperity and employment, especially for their youth. Those Palestinian people who rely on tourism, such as hotel owners, restaurant owners, souvenir shop owners, artisans and tour guides, have also been hit hard. Your trip may not be generous or expensive, but it will bring much-needed funds to Palestine.

3. You will witness military occupation

who have suffered under occupation for more than sixty years often feel that the world has left them, that they are invisible. As more as their land is confiscated by the settler movement backed by the Israeli military and Government; as more as their homes are destroyed, olive fields are destroyed, wells are dried up and polluted; and as more and more people, many of them children, are maimed and killed, Palestinian people are wondering: "Why is no one standing up for us in the international community? Why is no one holding Israel accountable for continuing violations of international law, ignoring UN resolutions, one by one?" Fearing that these questions will become deaf, the Palestinians rejoice in the presence of international witnesses who observe the peace efforts that the Palestinians make every day to "exist" on their land, in their homes and with their families. They welcome foreign citizens who are interested and willing to live among them and learn from them. Your presence reminds them that there are people in the international community who believe that the Palestinians should live in peace, security, dignity, and independence. Your presence helps to bring a little hope into their lives - living in a situation that has caused and continues to cause great suffering.

4. You can learn or improve your Arabic

It is difficult to learn and master a foreign language without access to native speakers. The best way to learn Arabic is to immerse yourself in the Arabic-speaking culture and practice the Arabic language skills you learn outside of the classroom. You will find that Palestinians are willing to share their language and, many of them, practice their English, German, French and Italian with visitors from all over the world.

5. You will gain the necessary knowledge and skills as a volunteer

As a volunteer in Palestine, you will be able to develop valuable skills and gain knowledge in a number of areas, such as community development, agriculture, the development of human and civil rights, the empowerment of communities and individuals, the formation of intercultural understanding and communication, to name just a few. Volunteering in the country will be a great addition to your resume and knowledge of Palestine and history.

Expect road closures and numerous checkpoints in the West Bank. Entry into and exit from the West Bank is not possible without passing through at least one Israeli military checkpoint. To pass through these checkpoints, you will need a passport and an immigration receipt. Sometimes the Israeli authorities restrict entry into and exit from the West Bank, either on Jewish holidays or as a result of a security incident. This usually does not affect foreign citizens, but you should be careful. Road closures may occur without special notice. You should be aware of the local tourist information. There were several violent incidents, particularly in the northern part of the West Bank (north of Tappua), including the throwing of stones and other objects on Highway 60. In Nablus, persons carrying weapons were arrested. Special vigilance should be exercised in this area. Bethlehem, Ramallah, and Jericho have seen large numbers of tourists, including on organized excursions, and there have been no recent reports of any serious incidents involving foreigners. However, you should be careful when you travel to the West Bank. Demonstrations and violent incidents can occur without warning, especially in areas adjacent to refugee camps throughout the West Bank and in the cities of Jenin, Nablus, and Hebron. Any demonstrations or large gatherings, including student protests, should be avoided.

7. Be careful, the West Bank is expensive!

Unfortunately, travel in Palestine is more expensive than you might think, with similar prices to Greece or Portugal. With the exception of falafel, which is a staple food, everything is quite expensive. Typically, non-fast food can cost anywhere from $ 8 to $ 15. A room in the hostel will cost from 12 to 20 dollars. A bottle of water costs almost $ 1.

In many areas of the city visited by tourists, including the old city and its surroundings, demonstrations are often held, especially after Friday prayers. Some of these protests have led to violent clashes. Be always on the lookout in the old town and leave the area if there are signs of tension or unrest (for example, if the shops in the bazaars suddenly start closing their shutters). The entrances to the old town can be checked or closed. Isolated street protests and demonstrations may also occur elsewhere in East Jerusalem. In Jerusalem, there have been a number of violent incidents on public transport and near public transport lines, including the "Light Rail" network. In Jerusalem, you should avoid using buses.

9. The Palestinian cuisine is excellent

Seriously, if you are not yet familiar with Arabic cuisine, then you will find a pleasant surprise. Some suggestions include: Mtabbal, an eggplant sauce; Makluba, the famous "upside-down" dish; Malfouf, stuffed grape leaves; Fattouche, an Arabic salad full of fresh vegetables; or Zahra Bi Tahine, cauliflower with tahini. The Arabic-speaking world is famous for its excellent Palestinian cuisine and unsurpassed hospitality!

Driving a car means unpredictability and frequent accidents. Radar speed traps operate on roads within Israel and in the occupied Palestinian territories, and high fines are levied for speeding. If you will drive on the West Bank, check if you are insured before you set off. It may be easier to arrange insurance in the West Bank with a car rental company in East Jerusalem than with large car rental companies in Israel. Hitchhiking in Israel and the occupied Palestinian territories is not safe. If you are traveling in the desert, go along with others, bring a water supply and a mobile phone, tell someone about your route and the estimated time of return.

Topics
Apply for any visa in two clicks!
Countries
Do you want to get a Palestine visa easily?
Get your visa now 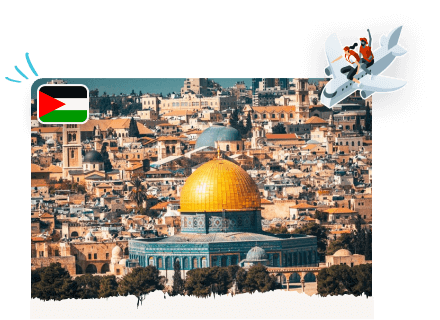