12 reasons why you should travel to Israel right now 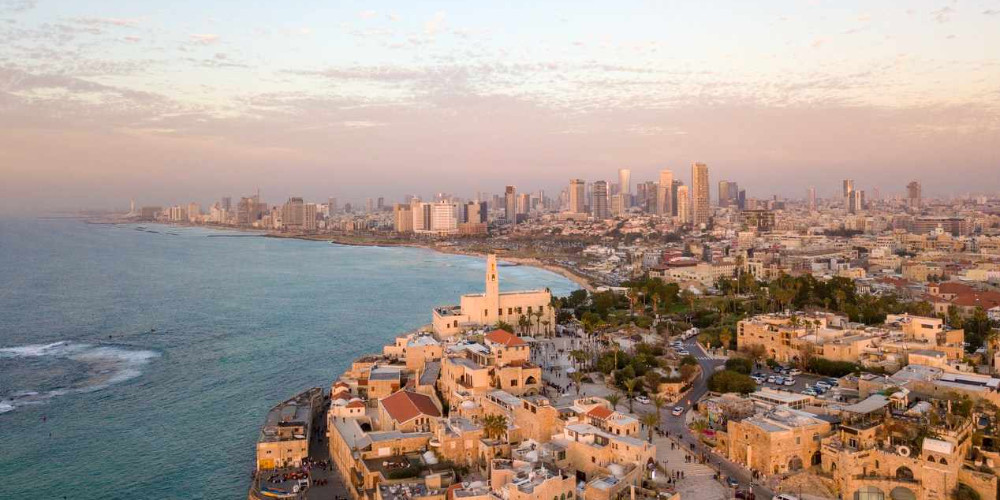 has a habit of repeating itself, which may sound strange, but it's true. So, we can also participate in this process. For example, like the Crusaders to go to the "Holy Land". But of course not for the sake of conquests, but for a first-class holiday. And no longer in the "Kingdom of Heaven", but in modern Israel. About which you probably have heard more than once, take at least a series of the popular program "Heads and Tails Israel". This colorful country is able to surprise the most hardened travellers. For which I will today find a number of reasons to visit these beautiful regions.

Where is Israel located?

It is located in the Middle East, surrounded by countries such as Syria, Lebanon, Jordan, Egypt and the territory of the Gaza Strip. On the other hand, it is washed by the Mediterranean Sea. Israeli history is one of the most diverse in the world, the country has experienced many significant moments and epochs. Tours to Israel began to be popular at the beginning of the 21st century, and are well developed today. Israel today boasts a turnover of almost 4 million tourists a year. So let's find out what is the reason for such indicators.

As we have already noted, Israel today is known for its important role in the history of mankind, especially related to religion. This place is sacred to both Jews and Christians and Muslims, each of whom has shrines on this land. That is why a trip to this country will plunge you into the maelstrom of events of the birth of our era. And historical sights will tell you the secrets of different personalities and episodes. The cultural aspects of all these epochs still figure in the life of the local Israel population. The contrast of Western customs against the background of desert customs will turn your head and make you wonder at the possibility of such a mixture. As you make your way to Israel, you will find your motivation to do it again. Thus, for hundreds of years, people have been trying to find something of their own in the "Promised Lands".

2. The weather is appropriate all year round

The next reason to travel to Israel will provide its comfortable climate, which is characterized as subtropical, between the temperate and tropical zones. With a hot summer and in the cool winter, you can organize your trip at any time convenient for you. The rainy season lasts from October to early May, but the peak of precipitation replacing the usual snow and frost falls in the period from December to February. In the southern part of Israel, the amount of precipitation is negligible. Snowfall can only be observed in the northernmost part of the Golan Heights, where the top of Mount Hermon 2,224 meters remains covered with snow from December to March. In the rest of the country, snow is very rare. So to the question "when is the best time to travel to Israel?» it is safe to say "always", as each season has its own conditions for tourism. Just regardless of the weather conditions, for any type of vacation, there is an ideal period from autumn to spring.

The Dead Sea, translated from Hebrew as (Salt Sea), is the lowest point on the planet, surrounded by stunning landscapes of the Negev Desert. In reality, this is just a lake, the high level of saltwater of which does not allow any species of fish to get along. Another result of using saltwater is its well-known medicinal properties, as well as a unique feature that allows you to naturally not drown in it. Located just an hour's drive from the capital of Israel, Jerusalem, it is a popular destination for tourists, as well as Israelis themselves, who want to relax for a few days and experience the unique properties of this sea. Many tours to Israel have available points related to the Dead Sea, as this is an unforgettable way to enjoy the natural riches of the country and a great chance for improving the body.

4. The old city of Jaffa

Jaffa is the ancient port city from which Tel Aviv grew. Old narrow streets and courtyards are the main feature of the city's architecture, and the Jaffa Flea Market is a well-known attraction of the area, where vendors sell a diverse range of interesting and unique goods. There is a lot to see in the city. Since its restoration, it has become a popular tourist attraction, and people visit it as part of Tel Aviv and as an independent city. It is a haven for Jewish and Arab populations living and breathing the same dense air. This city is dotted with galleries and artists ' studios, as well as boutiques and craft workshops. There are also many unique and interesting Israel restaurants in Jaffa. Israel today is still carrying out excavations in the port of Jaffa, but it is still used by fishermen and visitors to the city it does not hurt.

It is perhaps the most striking tourist attraction in all of Israel. Every year, tours to Israel help attract hundreds of thousands of tourists to the Baha'i Gardens on Mount Carmel in Haifa. This eighth wonder of the world, as it is called by some, has been included in a number of UNESCO World Heritage Sites for more than a decade. The gardens consist of nineteen terraces leading up the northern slope of the mountain. These terraces were designed as waves or circles, all the lines and curves of which draw attention to the Shrine on the central terrace. Which is a place of pilgrimage for representatives of the Baha'i religion — one of the main independent religions in the world. The atmosphere of this attraction will not leave visitors indifferent, and its unique construction will open a beautiful view of the beauty of the city.

There are many ways to escape from the sun's rays, but why think long when is the best time to travel to Israel and dive under water. For this purpose, there are conditions for scuba diving on numerous beaches in Israel. Since the west of Israel is completely bordered by the Mediterranean Sea, and in the south by the Red Sea, there are many different places for diving. Among them, the following places are popular: The Coral Beach Nature Reserve is located in the city of Eilat and has more than 2,500 different types of underwater life. Its length is about 1.5 km, the shallow part does not exceed a depth of 8 meters, and the deeper side begins at a depth of 16 meters. This is a great dive site containing a fantastic maze of rich bright corals and many colorful and beautiful fish; the Rosh ha Nikra Caves - they are a series of underwater caves with contrasting light and dark areas, creating an unforgettable diving experience. The maximum depth is only 7 meters, however, for safety you need to go with a guide who is familiar with the area.

What you really won't forget after travel to Israel is fine dining. The release of the program "Heads and Tails Israel" is a direct confirmation of this. It repeatedly mentioned the variety of local dishes and the skill of their creators. Over the past decade, Israel has become one of the leaders in world cuisine. And this is quite logical, if we take into account the Israel population that immigrated to the country from all over the world. Israel on the map is known for its countless amazing Israel restaurants that combine different Israel cuisine. On arrival, you should definitely try: Falafel-a dish made from beans, chickpeas or a combination of them; Tahini, a side dish that is the basis of some of the best Israeli traditional dishes, and is obtained from the seeds of blackberries. Shakshuka is a traditional breakfast made with a mixture of pepper, coriander, tomatoes and eggs. And, of course, Hummus is the most common dish in Israel cuisine. The most important thing is not to be surprised by the sudden weight gain during the holiday, as it is very difficult to resist.

As you know, Israel has more museums per person than any other country in the world. From large institutional Israel museums, such as the Israel Museum in Jerusalem and the Tel Aviv Museum of Art, to small museums in cities or villages. Israel today is truly intertwined with high-quality museums in almost every conceivable category. Israel museums offer extensive research in all areas, including art, music, history, religion, and more. The most popular of them can be considered: the Israel Museum, the Rockefeller Museum, the Museum of Biblical Countries, the National Maritime Museum and the Rally Museum.

For many people, Israel is a default hotspot on the map, and its association with the conflicts in the Gaza region creates an image of instability throughout the country. I hasten to please you this is not so. Despite what you see in the news, Israel is actually a very safe country to travel to. The main tourist areas-Tel Aviv, Jerusalem (capital of Israel), Haifa, the Negev and the Dead Sea-remain as safe as they always were before and after the conflicts. In addition, personal security in Israel is always incredibly high, and the crime rate is very low compared to most Western countries. There is even an opinion that traveling in Israel is safer than staying at home in the United States. Well, even if we talk about the territory of the country around Gaza, then tours to Israel include these zones in the program, since they are not tourist, and travelers have no reason to go there.

10. You'll have time for everything

We know where is Israel, but do we know that it is a very small state? Despite the numerous advantages listed above, all this is contained in a country with a territory of 22,072 km2. This means that every second step you take will lead you to a new attraction. You will not need to spend precious days on flights and long trips. Tourists will be able to plan their trip in a couple of days, covering a large number of places, in the same issue of "Heads and Tails Israel" this topic is touched upon. Therefore, if you have received a mini vacation, then this is exactly when is the best time to travel to Israel and spend it with benefit.

Israelis - whether Jews, Muslims or Christians-are usually very warm and hospitable people. Go to the store and you will most likely be greeted with a handshake and sweets. Tell an Israeli Jew that you want to have dinner on Shabbat, but you have nowhere to go, and you will be invited to visit. If a worker comes to your house to fix something and you don't offer him coffee or tea, he will be offended. Hospitality is an important part of the culture that marks Israel on the map as a place of friendliness and understanding.

The nightlife, despite the region where is Israel located, is quite energetic and not inferior to Western standards. Long-standing experience in the tourism sector has contributed to the development of entertainment facilities in many cities. One of the most vibrant aspects of the city's nightlife in Tel Aviv. The city is gaining more and more international fame every year, and is now considered one of the best places for nightlife in Europe. There are bars and clubs that will satisfy every taste and interest. From mega clubs that attract the best DJs from around the world to small neighborhood bars, underground and beach bars. Tel Aviv's nightlife is by far the best way to spend an energetic time in the country.

Topics
Apply for any visa in two clicks!
Countries
Do you want to get an Israel visa easily?
Get your visa now 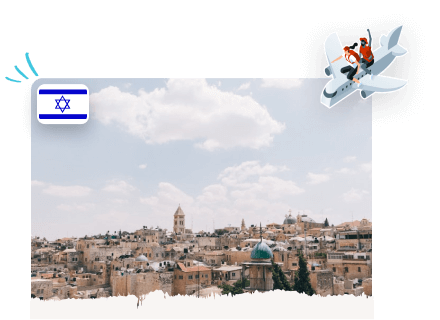