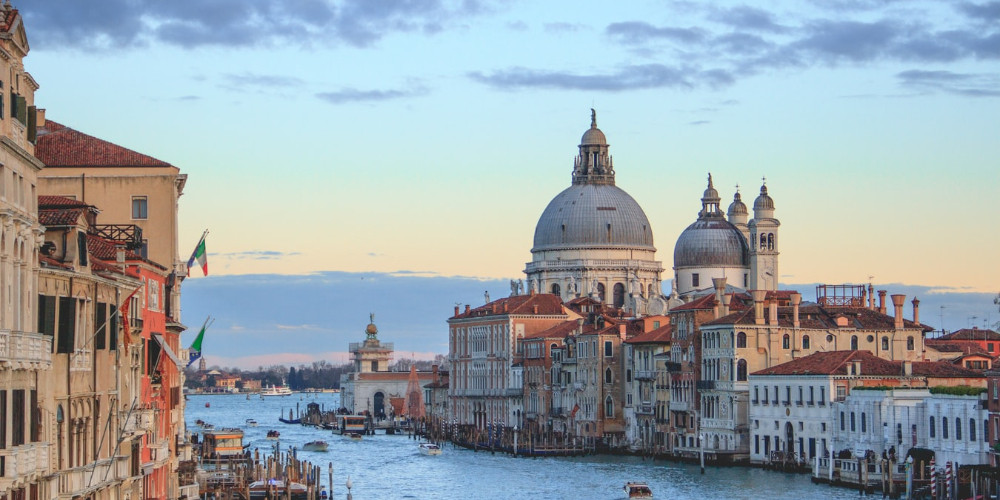 10 reasons why you should travel to Venice instead of Milan

1. To see with your own eyes the city on the water

3. To immerse yourself in the rhythm of urban life in Venice

4. The narrow streets of Venice

5. The Carnival of Venice

6. The sights of Venice

1. To see with your own eyes the city on the water

Venice - one of the most beautiful cities in Italy. Graceful and very romantic, the city of bridges and hundreds of canals. Venice stands on the water, and this makes it unique, not like other cities. The town has no cars. You can move around on public transport, but it is unusual. Boats are used as transport. You can also take an excursion on a gondola and see the city moving on the water. You should see it with your own eyes. Milan is also an incredible city; it has its beauty. It is more typical for European cities. At the same time, there is something in Venice that is not anywhere else. Seeing the houses on the river you can lose your voice, it looks so magical that you feel in a fairy tale.

Each city has a different atmosphere, and each one is beautiful in its way.

Venice is a magnificent and very soulful city. The atmosphere of Venice is unique; it is full of many saturated colors and events. Lightness, freedom, lively labyrinths of streets - all this creates a unique ensemble.

The outgoing nature of ancient Europe fills Venice like no other city in Italy. Here every corner breathes history. Behind magnificent palaces and cathedrals are hiding narrow and damp quarters. Magical and mysterious legends walk in the city.

Milan - the city of fashion, it is here that shows of world brands and fashion weeks. There are many stores. Milan is called the "grey old lady" by locals, compared to other cities in Italy. Indeed, there is a small sun.

3. To immerse yourself in the rhythm of urban life in Venice

It is not difficult to feel the real life in Venice. The most important thing is that you are not disturbed by anyone. Usually, there are a lot of tourists on the main, central streets, but if you turn to a small road, you can enjoy the city almost alone. The best way to escape from the noise is to get lost. Away from the standard tourist places, Venice is very romantic.

There is one secret that allows you to walk even in the main streets without a large number of tourists. It is that it is desirable to come to Venice in winter. The flow of tourists is much smaller, but there is a special slightly greyish, dimmed light, which is very suitable for this city. In winter, there are often fogs, and they give an incredible charm, a little mystical atmosphere.

Milan is a modern metropolis, the financial center of the country. The city is very fussy and as if office. Everyone is in a hurry somewhere. Coming to another country, you want to relax from the rapid traffic, from the turmoil and enjoy the city.

4. The narrow streets of Venice

Another exciting feature of the city is its streets. There are such narrow streets that it will be difficult to walk in them for one person. For example, one of the narrowest streets of Venice is 52 cm wide. If you dreamed of walking in the labyrinths, then you are right here. But be very careful, because you can easily get lost in them, especially in the evening.

Also, such streets are an excellent place for a photo session. To make a beautiful photo in an unusual place will be a great idea. And if you don't like to be photographed very much, you can enjoy the stunning architecture. Or feel like a dwarf who walks on a narrow labyrinth.

There is no such thing in Milan; the streets are more extensive. Yes, it is beautiful there, you can look at the city and stroll. But you will not find such an unusually narrow street there.

5. The Carnival of Venice

Once a year, Venice becomes a real decoration for a stunning carnival. Masks and fun, this is what awaits you at the festival in Venice. The most important condition is that you should wear a mask. Whatever you are, underneath it, you can feel like the one you have always wanted to be.

The Carnival of Venice takes place in February and lasts only ten days. All ten days the streets are filled with people in masks and medieval costumes. On the roads there are concerts, dancing, having fun, making costume processions. And in the evening in the beautiful palaces give luxurious balls.

6. The sights of Venice

Some of the most influential sights of Venice are the grand canals, exquisite palaces, and the luxurious main square of San Marco.

The first thing that every tourist, who came to Venice, must do is to take a ride along the main avenue, and the Grand Canal serves them here. It divides the city in half, into two parts; this is the main artery from which the smaller canals depart. The Grand Canal is a concentrate of beauty in Venice, on both sides of it there are houses like pictures. At least for a moment, you want to stop the boat and look at each palace closer. And also on the channel is a vast number of courts, there are more than 300 of them.

Venice is a real Instagrammable wonder of the world. Here is where you have seen the palaces stand almost waist-deep in water. Here in each house, in each lived someone great.

The second very tourist place in Venice is the central square of San Marco. In the middle of the day, because of the tide, a lake appears in the yard, but it is not a big deal. It looks unusual, and for curious tourists, it is an attraction in general.

Italian cuisine is considered one of the most exquisite in the whole world. It offers dishes for every taste. But Venetian cuisine has its nuances, which are the distinctive feature of the region. To feel the city, a tourist must focus on local cuisine.

Venetian cuisine is based on two things. The first is seafood (thanks to the sea there are enough of them) and the second is spices from the east. For those who love sweets, you can enjoy tiramisu. Veneto is its homeland. However, the recipe for this dessert was invented in the neighbouring city. However, both towns recommend tiramisu as an exquisite dessert.

Milanese cuisine is slightly different from Venetian. You won't find any seafood in the traditional Milan dishes, because there is no sea nearby.

Let's not dwell on it, because everyone has different tastes. But you will undoubtedly find delicious and exquisite food that you will like and remember.

Perhaps this is the saddest reason, but it is. While riding in gondolas, you can see what Venice is like today. A city that has been sung by poets for hundreds of years is slowly withering. All the scientists say in one voice that it has only a little left. It will soon flood Venice. Every year there are floods, which surge half the city. Venice is rotting; plaster collapses, brick cracks, and the walls of houses dampened to the upper floors.

Venice is a fantastic city. Yes, it is expensive here, and sometimes it smells terrible, and there are a lot of tourists. But how pitiful that this, one of the most romantic cities in the world in 50 years can completely submerge into the water. And in about ten years, Venice will be uninhabitable. We may be the last generation to see it as a tourist city. In recent years, the water level has risen by almost half a meter. If this goes on, we will talk about Venice only like about modern Atlantis.

But the Venetians do not believe in the predictions of scientists and are not going to be disappointed. They sit in a cafe, although their ankle feet in the sea, learn to walk on water. And the mould and shabby paint, in their opinion, only paints Venice, and it is difficult not to agree with it.

Milan does not stand on the water, and the city does not face such danger. And to be in a town that will soon disappear from the face of the earth is something incredible. And then you will proudly tell your grandchildren about Venice, which they can't see with their own eyes.

Do you know what is Venetian glass? The symbol of Venice, besides gondolas, is Venetian glass. On the island of Murano are the famous workshops, where for many centuries in row masters blow out of incredible glass products. Murano glass is not only the most expensive but also the best in the world. Real Venetian glass is exclusively handmade; all products are made by blowing method. Venice is also proud of its unique lace. It is made on the island of Burano. The lace is made only by hand, and it looks simply stunning. But the cost of the lace is not small.

Many people think that Venice is just a tourist square of San Marco and the Grand Canal. But how misguided they are in this. Are you wondering how was Venice built? Well, Venice is built on 117 Venetian Islands scattered around the lagoon. Each island is unique in its way. Island glassblowers, island cemetery, island lace, island restaurant, island plague, island beach, and others.

Island restaurant: Mostly, rich people come here to visit one restaurant. It is famous for growing all the products for its dishes by itself. And their main feature is the vast vineyard lands. And here they make exclusive wine.

Island cemetery: A long time ago, they kept Venetians right in the monasteries. When all the places were over, they decided to allocate an entire island under the cemetery.

Isle of lace: It is famous for its grandmothers, who weave fragile lace, but it is expensive. So tourists began to come here to take a bright photo.

Plague Island: When an epidemic of plague slaughter hit Europe, the island began to bring the corpses and live infected people. They were dumped in a pit with the bodies and burned alive. After that, Plague Island was not closed, but a new isolator was made of it, only now for the mentally ill. But currently, the island is closed for visitors, and the building is in terrible condition. But fans who like to tickle their nerves, it attracts even more.

If you have ever been to Venice, you are lucky. No city on earth is excellent everywhere. Either on the central square or a small lost bridge.

Venice is like the last beast on earth. Hundreds of people come to see Venice every day. Everybody wants to touch it, they flash their cameras, and it makes them feel bad. We need it respectfully, trembling, and carefully so that our grandchildren can look at it and call themselves lucky.

“War was peace; freedom was slavery; ignorance was strength”. But not anymore. The biggest power of our time period is information and knowledge. Individuals are as powerful as much knowledge they own. Murad believes that powerful individuals create more powerful and developed society. In order to reach this society, people should share all information and knowledge they own with each other. That is the main reason, he loves to research and gather knowledge in all the fields, and of course, he also understands the vitality of sharing this information with people around. He is sure about he will achieve his goal by sharing this articles in this platform.