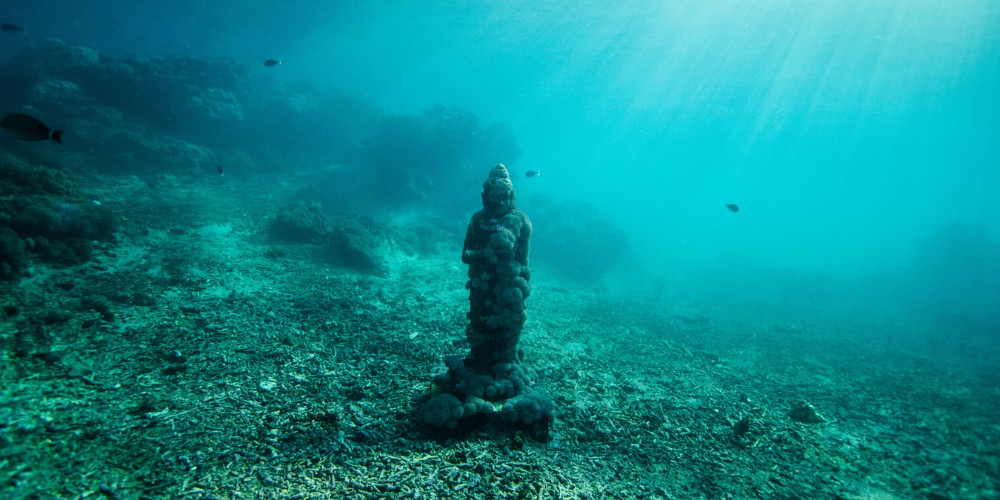 The Museum of Underwater Art

Places to visit in Mexico

The city of Cancun in the Yucatan peninsula of Mexico is famous for its beautiful coasts. A secret work of art is hidden on these shores. It is the Museo Subacuatico de Arte. Have you ever heard about an underwater museum or where is the underwater museum? The Museum of Underwater Art, the world's first underwater museum, is near to the beach. The underwater museum, located at a depth of 4-8 meters, facilitates underwater walking. It was first opened in 2009, with 100 statues in it, while now the number has exceeded 500 statues. Sculptures scattered over an area of 420 sq.m were placed at different points in the sea. The reason for it is to prevent jams that may occur at some point during the tourist flow. The author of the Cancun Underwater Museum with monuments of human, animal, and things weighing over 200 tons in total is the British photographer, sculptor, and art worker Jason Decaires Taylor. Taylor has used specially designed durable cement to make the statues part of the underwater. Thanks to this, sea corals, algae, molecules, and other animals were able to nest in sculptures. Thus, these creatures changed the appearance of the statues strangely over time. While the change made smiles on the faces of some of the statues, it made some sculptures more horrible.

The reason for the establishment of the Cancun Underwater Museum in this area is the occurrence of extraordinary marine situations here, resulting reduction in the number of tourists. Now, more than a million tourists flock to the museum each year. Underwater sculptures are offered to tourists in two galleries: Manchones and Nizuc salons. The first gallery is made up of a bunch of human statues. This gallery represents people who have been called "refugees" for various reasons in different parts of the world. The group of thirty-five "people" is set up at the bottom of the sea marching to an unknown destination. Some statues express fear, some sadness, and some unfamiliar feelings. The second gallery covers the refugee issues in Syria, which reflects the desperate human figures looking for medical examination and support. Separately a week is needed for each gallery to be positioned underwater after being prepared. Jason Decaires Taylor worked for a week underwater to bring them to the design he wanted after making these figures down the sea.

After the creation and commissioning of the Museum of Underwater Art, it became famous all over the world. The author says: "These works are not intended to be fun, but to show the common problems of the world. More than half a million dollars have been spent on this project, which caused a great deal of noise. If the Mexican government paid the first investment, some companies, who saw that the project brought both money and ratings, agreed to invest in further years."

Apart from the art, the Museum of Underwater Art has also increased its interest in underwater sports. Since its beginning, the museum has always been a subject of discussion in the world press, at meetings of human rights organizations, and art events.

The charming Museum of Underwater Art on the coast of Mexico has become a source of inspiration for other countries. After this museum, monuments of this type were erected in various parts of the world. The most famous of them is the "Underwater Sculpture Museum" on the shores of Spain and Turkey.