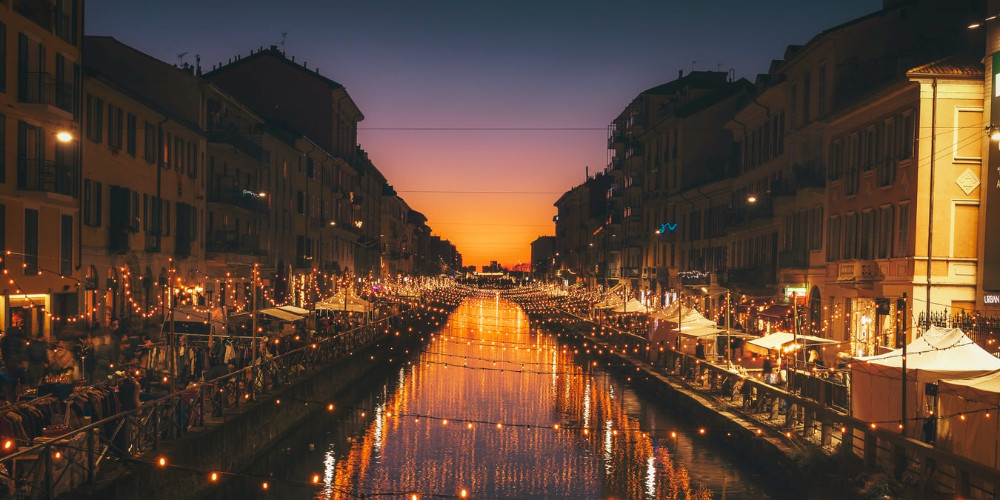 Milan on the map of Italy

What to see in Milan Italy?

What to see in Milan aka eat in Milan?

People are like the places where they live. The places where people live reflect them. It is not entirely clear in which of the two directions, or if this process of adaptation occurs, but this is invariably true for every place and in every corner of the world. Milan and the Milanese people are alike: hasty, snobbish, competitive, but at the same time curious, visionary, beauty lovers, cosmopolitans of Italy.

To a superficial and contrary assessment, Milan may seem gray, cold, and ugly. How many times have we heard this stupid thought? All you have to do is spend some time observing, go beyond the surface, open the heavy and austere door, behind which lies a stunningly wonderful courtyard.

The famous travel show "Heads and Tails" in Milan made you fall in love with this city, and now you are eager to see the city with your own eyes? Then this list of uncharted places in Milan is created for you.

Milan on the map of Italy

Milan is a city in Italy (Northern Italy), the capital of Lombardy, and the second-most populous city in Italy after Rome. Milan served as the Western Roman Empire's capital, the Duchy of Milan, and the Lombard-Venetian Kingdom. The city's population is about 1.4 million Milanese people, while its metropolis has 3.26 million inhabitants. Its continuously built-up urban area, which extends far beyond the administrative metropolis, is the fourth largest in the EU with 5.27 million inhabitants. The Milan agglomeration population, also known as Greater Milan, is estimated at 8.2 million, making it the largest agglomeration in Italy and the third-largest in the EU.

Milan is considered the world's leading alpha city with strengths in art, commerce, design, education, entertainment, fashion, finance, health, media, services, research, and tourism. In the city's business district is the Italian Stock Exchange (ital. Borsa Italiana) and the headquarters of national and international banks and companies. In terms of GDP, Milan is considered one of the "Four Engines for Europe".

Milan is located in the northwestern part of the Po Valley, about halfway between the Po River in the south and the foothills of the Alps with large lakes (Lake Como, Lake Maggiore, Lake Lugano) in the north, the Ticino River in the west and the Adda in the east. The city's land is flat. The highest point is located at an altitude of 122 m (400.26 ft) above sea level.

What to see in Milan Italy?

Although, of course, everyone has heard of the Duomo of Milan (Milan Cathedral). One of the largest cathedrals globally, the second largest after St. Peter's Basilica in the Vatican, Milan Cathedral is one of the most beautiful examples of Renaissance architecture to be found anywhere in Europe.

Of all the hidden gems in Milan, the roof terrace of the Duomo is the most beloved at all times. And so, if you want to enjoy the best of this secret place, be sure to go to the terrace during sunset (i.e., the golden hour), as it is at this time that the lighting is at its best and you will be able to take the most beautiful Instagram pictures.

Built over six centuries, but perhaps you don't know that besides being able to enter a huge church building, you can also climb up to its roof for an additional fee. From the top, you will soon be rewarded with an unparalleled view of Milan and beyond. The hosts of Heads and Tails in Milan will envy you.

Located in Milan's heart, Leonardo's Vineyard is a newly opened museum that houses, yes, Leonardo's vines. The museum is located across the street from the church of Santa Maria delle Grazie, where the artist's famous Last Supper is located. La Vigna di Leonardo is the perfect haven for all those tourists who want to relax in the sun while enjoying another secret of the capital of Lombardy. Reservations are always required.

It remained closed for 70 years and finally reopened in 2010. It is a public garden in the midst of what looks like a private house, snuggled up through an unassuming gateway to Milan. There are no signs on the gate, so this modest park can be a little difficult to find if you don't know exactly where you're going. It is perfect for relaxing on a sunny day and relaxing after battling the city heat.

The Palazzo Lombardia, designed by renowned architect Pei Cobb Freed, houses the Lombardy Regional Council's organs. It can look like a skyscraper that anyone can spot from miles away. But the secret to this place is that it can be visited on Sundays, from 10 am to 6 pm, for some breathtaking Instagrammable views. There are 39 floors to walk on, so come and enjoy Milan's charming line from the windows.

In 1848, the city passed through the so-called "five days of Milan". In these days, the Milanese people rebelled against the Austrian rule that held sway over their city, leading to violent conflicts between the two sides. Today, there is still a cannonball in the building wall on the Corso di Porta Romana. The remains of these battles bear a plaque with the date of destruction: March 20, 1848.

The Palazzo Dal Verme, which takes its name from the nearby Theater, is a hidden Renaissance gem embedded between modern buildings. The courtyard is something that everyone can enjoy, with an architectural harmony that is difficult to find in modern buildings. This building survived the bombing that Milan suffered during World War II in 1943. It makes it a rare piece of history between the streets of the city.

Via Lincoln is probably the best secret in Milan. It's a street dotted with colorful terraced houses that stands out as atypical in an industrial, business-like city like this. It was designed and implemented around the end of the 19th century to accommodate workers from the nearby area at affordable prices. Needless to say, these houses are very expensive right now. A walk along the street is free and will surely please any architecture lover who comes to the city.

What to see in Milan aka eat in Milan?

Carlo Cracco: Carlo Cracco is considered one of Italy's best chefs and is one of Milan's best assets. With several Michelin stars won during his career, Chef Cracco opened a restaurant in his name in Milan in 2007. The restaurant serves fine cuisine with first-class service and has two Michelin stars. A 10-course menu that takes visitors on a journey through incredible tastes and charming smells, Cracco will leave an indelible mark on any tourist's stay - and taste.

Villa Invernizzi is a Liberty-style palace overlooking the Corso Venezia in central Milan, which was once a street where ladies rode in carriages up and down during the 18th and 19th centuries. Today it is considered one of the most delightful gardens in the city, where pink flamingos, peacocks, and ducks roam freely. Worth a visit if tourists are looking for an alternative to Sempione, Milan's famous park.

Milan is also famous for its legendary football clubs. Associazione Calcio Milan usually called the A. C. Milan or simply Milan, is a professional football club in Milan, Italy, founded in 1899. The club spent its entire history, except the 1980-81 and 1982-83 seasons, in the top tier of Italian football, known as Serie A, from 1929-30.

Football Club "Internazionale Milano", commonly referred to as "Internazionale" (pronounced [ˌinternattsjoˈnaːle]) or simply "Inter", and known as "Inter Milan" outside of Italy, is an Italian professional football club based in Milan, Lombardy. Inter is the only Italian club that has never been relegated from the top tier of Italian football.

Founded in 1908 after a split within the Milan Cricket and Football Club (now Milan), Inter won its first championship in 1910. Since its formation, the club has won 30 domestic trophies, including 18 league titles, 7 in the Italian "Coppa" and 5 in the Italian "Supercoppa".

From 2006 to 2010, the club won five league titles in a row, which was a record at that time. They have won the Champions League three times: twice in 1964 and 1965, and again in 2010. Their last victory ended with an unprecedented treble for an Italian season: in the same year, Inter won the Coppa Italia and the Scudetto, as well as three UEFA Cups, two Intercontinental Cups, and one FIFA Club World Cup.

Even if you plan to spend only one day in Milan, you will soon discover that there are many hidden gems and unusual Milan attractions that may interest you. For those who stay a little longer in the capital of Lombardy, some amazing day trips from Milan are worth noting.

Otherwise, there are a few simple things you should know before you go. For example, while almost everyone in the travel industry speaks English, it's only polite to learn a little Italian before you travel. I recommend at least learning "hello", "please", "thank you" and "sorry". To help you, consider investing in a simple Italian phrasebook.

Finally, thanks to the growing popularity in the last few years, Milan's interest has increased and shows no signs of slowing down. As a result, the best hotels and B&Bs often sell out quickly, especially during the high season, such as during school holidays and in the summer. To avoid disappointment, be sure to book your accommodation well in advance.