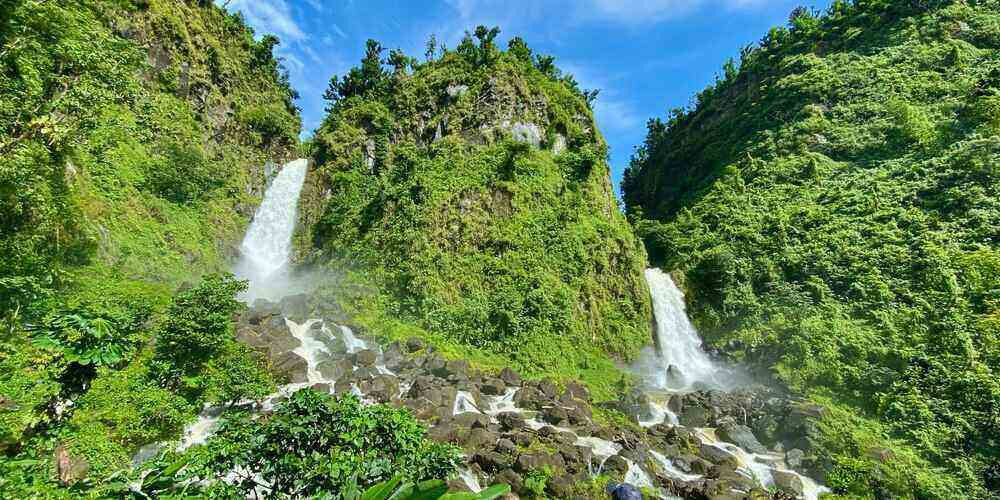 10 things I wish I knew before going to Dominica

2. More affordable than the other Caribbean countries

3. Dominica: getting more connection with nature

5. Be ready to meet friendly people!

8. Wear as comfortably as possible!

9. Be super careful about where to swim

What is the best time to travel to Dominica?

How to travel to Dominica?

Another heaven-like place to explore is Dominica. I am sure most of you haven't heard about this gorgeous country. Where is Dominica? It is an island located in the Caribbean Sea. Dominica is situated between the French islands of Guadeloupe on the north and Martinique on the south. It is no secret that due to its natural beauties, the island of Dominica is called the Caribbean's hidden gem. This off-the-beaten-path island will mesmerize you with its Instagrammable places when you travel to Dominica. In this blog, I will write about interesting facts about Dominica, air travel to Dominica, cruise ships going to Dominica, and what to know about travel to Dominica. Roseau is the capital and the largest city of Dominica.

Dominica flag is unique, with every color and symbol representing the country's unique features. It was adopted on November 3, 1978. It is a green flag with a yellow stripe on it, representing the original inhabitants. The black color shows the importance of fertile soil, while the white color is denoting pure water. In the center of the Dominica flag, ten stars are representing the ten parishes in the country. Those stars are surrounding the Sisserou Parrot, which is an endemic species to Dominica.

Here are ten things you should know about Dominica before you travel to Dominica:

The island is full of jaw-dropping landscapes and the environment. Dominica Island is just 47 kilometers long and about 29 kilometers wide. The beaches of Dominica are not as wide and sandy as other Caribbean countries. That's the reason why the island is more for exploring natural mysteries than mass beach parties. The mountainous landscapes are covered with rainforest and home to more than 300 rivers and waterfalls. So, don't come to the island with the expectation of lazing on the beach. You can do so, though. But it is not the right way of getting the best out of Dominica.

2. More affordable than the other Caribbean countries

One of the main distinguishing features of Dominica is its high affordability compared to other Caribbean islands. The Caribbean region is indeed, in general, more expensive than other tourist destinations in Eastern Europe and Southeast Asia. Most of the islands here are small. So, there are not many companies competing with each other, making it easier for them to charge you more. Unlike other nations in the region, such as Barbados, St Martin, and Antigua, Dominica is more affordable. The main meal in a restaurant would cost you about 12 dollars. The whale watching tour is around 70 dollars. You can find hostels charging 15 dollars per night.

3. Dominica: getting more connection with nature

Are there luxurious hotels, restaurants, and bars in Dominica? No! It is a country to make connections with nature. People consider Dominica as the health and wellness capital of the Caribbean region. Awash in natural landscapes, fresh air, and pure water, the island has special healing power. You will get therapy just by having organic food and enjoying an idyllic environment.

One of the most interesting facts about Dominica is the misconception that it was devastated by Hurricane Maria. In September 2017, Hurricane Maria hit Dominica very badly. It was the worst natural disaster that happened on the island. A lot of houses and infrastructure got destroyed as a result. But guess what? It took only one year for the people of Dominica to bounce back. Already in 2019, the country was fully back to normal. It was an excellent example of resiliency in a country. People's hard work and positivity made it possible for them to rebuild the cities and towns again.

5. Be ready to meet friendly people!

Where is Dominica? It is where hospitality is the main trait of communities. Those people who worked hard to restore the cities and towns after the hurricane are more than kind. The traits of hardworking and hospitality are embedded in Dominica's society. In its welcoming communities, talking to tourists has already become a national pastime. The island's main industry is tourism; that's why it is no secret that caring for tourists is already a part of their identity.

English is the official language of the country. It is spoken everywhere, making it much easier for tourists to stroll through the streets without the assistance of a guide. Besides, some people also speak Dominican Creole and Antillean Creole. These two languages are based on French. It is widely spoken in the country thanks to the French migration to the island at the end of the 17th century.

8. Wear as comfortably as possible!

As I mentioned earlier, nature is the main asset of the island. It is full of adventures. Therefore, the main suggestion for you is to bring a lot of comfortable clothes and sneakers. Dominica will make you feel alive with its nature activities. In the Morne Trois Pitons National Park, you will get to forget your problems and concerns by immersing yourself in Instagrammable nature. After some hiking, you can go swimming in TiTou Gorge, which is a heaven-like place. Tourists can take an amazing canyoning trip, scuba dive, explore abyssal reefs, etc.

9. Be super careful about where to swim

Not every lake and beach is for swimming in Dominica. Regarded as a World Heritage site, Boiling Lake is very dangerous for swimming. You should visit Boiling Lake with a professional guide. Although the temperature in the lake has dropped recently, it may again arise suddenly without warning. There are some beaches lacking lifeguards; avoid swimming there. Make sure that you consult with your guide or local Dominican people for where to swim. For scuba diving and snorkeling, there are companies providing professional guides for your safety.

Dominican laws and regulations prohibit sexual acts between same-sex persons. If they get convicted, LGBTQ travelers may be heavily fined and even jailed for up to ten years. Homosexuality is not accepted within society either. LGBTQ people can also become a subject of gross indecency and verbal abuse. That is why homosexuals should reconsider traveling to Dominica.

What is the best time to travel to Dominica?

The best time to travel to Dominica is from October to February. It is time when there is not heavy rain and humidity is less stifling. The average temperature at that time is hovering around 26°C. Starting from the end of July until October, it is Dominica's rainy season. There can be hurricanes and tropical storms during the rainy season.

How to travel to Dominica?

As Dominica is an island, one could expect two ways of reaching Dominica: air and water. There is no direct or non-stop air travel to Dominica from major cities in Europe and North America. As the country's Douglas–Charles Airport is too small for large airplanes. Therefore, Dominica's main way is by taking a local flight from Antigua and Barbuda, Guadeloupe, Saint Lucia, Puerto Rico, and Barbados. You can also take cruise ships going to Dominica. The cruise season is from October to mid-April. Famous cruise lines to Dominica include Aida Cruise, Seabourne, Windstar Cruise, Sea Cloud, etc. Most nationals do not need a visa to enter Dominica. Citizens of neighboring states – Antigua and Barbuda, Grenada, Saint Vincent, and the Grenadines Saint Lucia, and Saint Kitts and Nevis – can freely enter Dominica. People from the US and the EU can enjoy visa-free entry for up to six months.

Dominica, the Caribbean Sea's hidden gem, is a gorgeous place to enjoy the natural beauty and relax, forgetting all other problems. Mesmerizing lakes, green mountains, and beautiful architectural buildings will be the treat for your traveling desires. Where is Dominica? What to know about travel to Dominica? What is the best time to travel to Dominica? – these are the questions for which you can find the answer in this write-up. I also wrote about interesting facts about Dominica, the Dominica flag, cruise ships going to Dominica, and air travel to Dominica. The ten things you should know about Dominica traveling there are as follows: It is more famous for natural beauty than beaches; it is relatively more affordable than other Caribbean states; there is not much luxury in Dominica; Hurricane Maria; meet Dominica's friendly people; make sure not to mess up its name with the Dominican Republic; you can freely talk English; try wearing comfortably; not every place is for swimming; and LGBTQ people should be very careful.