10 things I wish I knew before going to Iraq 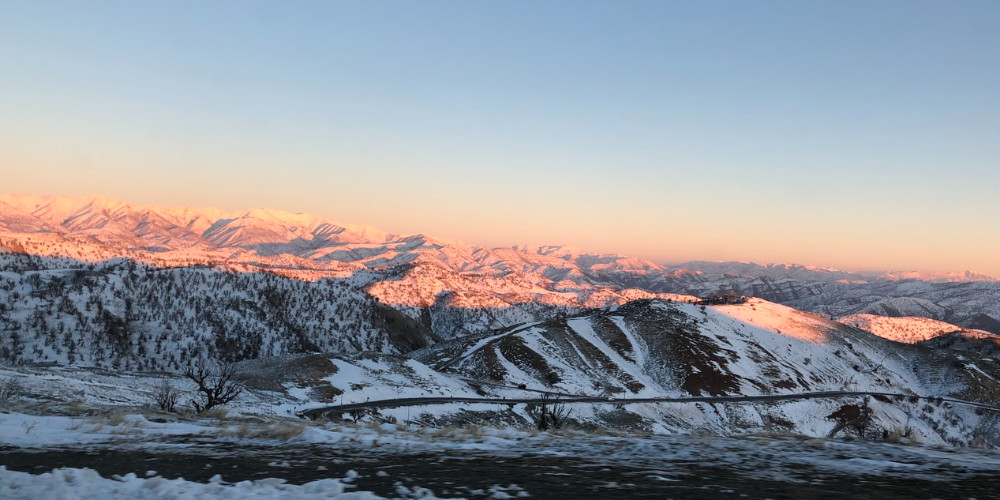 - so many negatives nowadays consist of these 4 letters. At the mention of this Middle Eastern country, only the horrors of war, instability, weak development, and the "popular" Iraq road of death are etched into our memory. Mostly, this view of the country was promoted by films about Iraq. If we lived for several hundred years, we would see with our own eyes what was not always so. Once the center of the entire Arab world, it was famous for its high trade and Islamic culture. Let's dig even further, the very territory where is Iraq located in the boldest civilization's birth zone. However, about everything in order, today we have what remains of this hotbed of eastern culture. For these reasons, the country is not famous for high tourist traffic, but their number is not zero. It is for them that today we will discuss 10 facts that you need to know before traveling to Iraq.

Iraq is a country in the Middle East, with an area of 435,050 km2. It has borders with such countries as Kuwait, Jordan, Saudi Arabia, Syria, Iran, and Turkey. The number of citizens living in Iraq in 2020 exceeded the mark of 40 million Iraq people. The main contingent is Arabs and Kurds. A strange fact: most people still do not know that "Iraqis", not counting the Kurds, are Arabs and consider them a separate nationality. The second strange fact: the other half of people confuse Iraq with Iran, and in general, some consider them the same. The republic's official languages are Arabic and Kurdish, and the capital of Iraq is Baghdad (from Arabic, the Gift of God). It is one of the largest cities in the Middle East, with just over 7 million citizens. Iraq went through quite a prosperous path in Iraq history, but after the caliphate's fall, it was mostly subordinated to the powerful states and empires of that time. The last colonizer was Great Britain, from which independence was obtained only in the thirties of the twentieth century.

2. The descendant of ancient Mesopotamia

Mesopotamia-as Iraq used to be called, is a region in southwest Asia in the Tigris and Euphrates river system, which is sometimes called "Mesopotamia". The entire region where is Iraq located, including some other neighboring countries, is the modern equivalent of the first human civilization's birthplace. Its history is marked by many important inventions that changed the world, including the concept of time, mathematics, the wheel, sailing boats, maps, and writing. Humans first settled in Mesopotamia during the Paleolithic period. By 14000 BC, Iraq people in this region lived in small settlements with roundhouses. Five thousand years later, these homes formed farming communities after the domestication of animals and agriculture development. These disparate communities originated in the northern part of ancient Mesopotamia. They spread southward, continuing to grow for several thousand years until they formed what modern humans would recognize as cities. Uruk was the first of these Iraq cities, built around 3200 BC, with a population at the peak of popularity of about 50,000 inhabitants.

3. What was Iraq called before?

As we know, the republic has undergone several historical events that have influenced many aspects of its culture. The question "What was Iraq called before?" is not easy to answer in one sentence. The name of modern Iraq appeared only after the Islamic conquest in the 7th century, which means "coast" in Arabic. However, these territories were settled long before that and consisted of city-states, such as" Uruk "and "Babylon". Later formed, a single state was called "Assyria". Then the land passed to the state of the "Seleucids" and was even part of the Roman Empire called the "Roman Province of Mesopotamia", which, however, was conquered by the state of the "Sassanids."  So the time has come for the Arab conquests and the acquisition of two features that Iraq still retains-its name and the faith "Islam". Since then, he has faced many more conquests, mainly by representatives of the Turkic dynasties like the Hulagids, Safavids, and the Ottoman Empire, as well as creating the "Kingdom of Iraq" by the British. But Iraq did not change its name on the world map anymore.

Iraq is one of the countries in the Middle East that has been most affected by sandstorms. The frequency of such cases has increased dramatically over the past decade and is continuously growing. Sand and dust storm events are regional or local. However, the former is more common than the latter. A regional event usually extends beyond the territory where is Iraq located in different directions. The main causes of the development of sand and dust storms in Iraq are discussed. The reasons are also either regional or local reasons. However, the former leads to greater economic losses and more severe consequences for human health than the latter. One of the main reasons for the development of sand and dust storms is climate change in the region, especially a sharp decrease in the annual rate of rain and environmental changes such as drying up of swamps, land degradation, and desertification. Sound water management through the use of unconventional resources and the adaptation of suitable irrigation methods can significantly help to overcome this phenomenon and minimize the number of sandstorms.

There are two climatic provinces in Iraq: the hot and arid lowlands and a northeast region where high elevation contributes to lower temperatures. In the lowlands, there are two seasons — summer and winter with short transition periods between them. Summer, which lasts from May to October, is characterized by clear skies, too high temperatures, and low relative humidity. In Baghdad, the capital of Iraq the average daily temperatures in July and August are around 35°C. Winter brings only rain to the south of Iraq; snowfall is rare. It lasts almost from November to April. In the northeast region, summers are shorter than in the lowlands from June to September, and winters are much longer. Summers are generally dry and hot, with an average of 7°C. Winters can be cold due to the region's high terrain and the influence of north-easterly winds that bring continental air from Central Asia.

The strongest association with the word Iraq as we have already discussed is war. Over the past 50 years, the country has been torn apart by a series of military conflicts that have adversely affected its economy and the country as a whole. The starting point of these events was the revolution and the overthrow of the monarchy in 1958. The change of power and internal strife shook the subsequent steps towards the establishment of the republic. At the age of 80, the war with Iran began, which lasted eight years. It was followed in 1991 by a new war in Iraq with a coalition of Western countries, called the "Gulf War". It was there that the incident was called "Iraq road of death". Without stopping there, the US launched a new military campaign against Iraq in 2003. This protracted conflict lasted 9 years, and only in 2011 was it decided to withdraw American troops from the territory of battered Iraq, but the country's unrest did not end there.

Civil war in Syria contributed to the destabilization of the region, and armed groups began to form on the border with Iraq. Hotbeds of civil war began to emerge, which have not yet died out. Movies about Iraq are very popular in the cinema; it is not strange that they are mostly films of the military genre. The most popular among them are Sniper 2014, Marines 2005, Storm Lord 2008, and War of Compulsion 2008. All these films about Iraq carry the meaning of the severity of the war and the senselessness of aggressive methods of solving problems. They describe difficult moments in the lives of soldiers sent overseas and residents who live in these conditions. For example, some real events of this war are the same Iraq road of death.

Attitudes towards alcohol in Iraq have undergone many changes since independence from recognition in society in the mid-20th century to the Iraqi Parliament's decision to ban alcohol in 2016 entirely. On the other hand, Iraqis still enjoy their national drink, arak, which is also popular among Syrians, Lebanese, and Palestinians. This ban's effectiveness was questioned from the first days of its adoption; people thought they were quite different from neighboring Iran, where alcohol has been banned since the 70s. Despite all the indignation, the Iraqi Parliament has clearly expressed its opinion by voting to ban the sale, import, and production of alcohol. Thus, Iraq is declared on the world map as a country ruled by Islamic laws.

To enter Iraq, a visitor from most countries must have a visa. If you try to enter the country without an entry or work visa, you will be immediately deported. A visa can be purchased at border crossing points for about $ 80. For individual visitors, crossing the border usually takes 1 hour. Suppose a visitor needs to obtain a visa before entering. In that case, they must prepare in advance for a long wait and bring several documents to the Iraq embassy confirming their identity and the reason for entering the country. Most often, accepted letters on letterhead of the company or the government. Officials in Baghdad are reviewing the applications. Even if you get a visa, you may be denied entry. You need to prepare as early as possible and make sure that you have all the necessary documents.

9. How to get around the country

Taxis are the safest and most common form of public transport in Iraq, especially in major cities such as Baghdad. All other public transport forms are rare, as most drivers prefer to stay within the city limits. Some taxis travel to Kirkuk and Mosul, although the cost is high. On the other hand, taxi rides inside the city are quite acceptable and easy to find. A taxi in Iraq does not set fares or meters, so be sure to agree on a price before getting on it. Fares usually depend on the distance traveled and are subject to discussion. Some companies hire English-speaking drivers, mainly serving the airport — city center route. In Baghdad, you can rent a car, and most of the providers of such services can be found at the airport. The Iraq war has affected the increased control of civilian movement, so if you encounter a military checkpoint, always follow the authorities' instructions. Bus services are available in Baghdad, although they mainly serve the city and the suburbs. Buses between Kurdistan cities are also available, but trips are irregular.

The republic does not consist of dilapidated buildings and a desolate steppe, as the popular films about Iraq imposed on us. There are not many hotels in Iraq, but there are hotels. They are mainly concentrated only in the capital of Iraq. However, with the cessation of large-scale military operations, living options in Iraq have improved. More and more hotels in Iraq are reaching Western quality standards, and there is still plenty of room for growth in the tourism sector, as many Iraq cities even do not have five-star hotels. However, their varied price, acceptable for everyone, will make it easier for tourists to choose. In Kurdistan, the situation is almost similar; the number of hotels is growing every year. One big drawback for the whole country is that renting out houses to tourists is not in fashion. And you will have to plan trips only to Iraq cities with hotels.