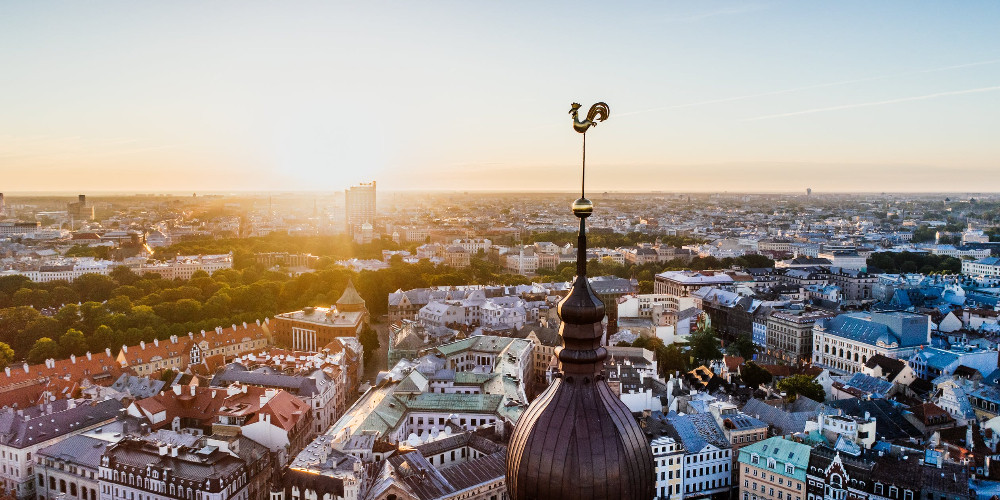 10 things I wish I knew before going to Latvia

3. The centre of the Baltic states is calling you!

4. Red-white-red. Isn’t that the flag of Austria?

5. Beach? Isn’t it freezing there?

6. This country is basically a never-ending forest!

7. Oh, Potato, the king of all vegetables!

8. Why are people so unfriendly?

10. Do you guys have the Internet in Latvia?

Latvia? Who is that? Are you thinking about where is Latvia and what is it famous for? If you are not very familiar with this side of Europe, don't worry - this article will introduce you to some basic facts about this small country in Northern Europe and who knows, maybe you will be here in no time drinking cold Kvass on a pristine beach or skiing down the slope at full speed! Here are 10 honest things from a local Latvian that any guest coming to Latvia should know!

Even if you are still not sure where is Latvia exactly, search Google, and you will see that a lot is going on around! First of all, it lies right in the centre of the Baltic states. Historically Latvia has always been at the crossroads between the East and the West. It is, therefore well connected to both. And with that, I mean both logistically (our national airline AirBaltic connects with most major cities in Europe!) and socio-culturally.

Besides, if you would like to see more than one country travelling by ground, then Latvia is a great choice geographically. It's so close to many of the neighbouring capitals! You might even plan to see three capitals in a week (namely, the Baltics) or have a road trip from Riga to the way up North in Lapland!

There is some truth to one half of this statement. Even though most Latvian people are NOT abnormally tall, research says that in Latvia, women are the tallest in the world - on average, 169,79 cm. And men are not far off - they come 4th on the list with an average of 181,42 cm. And those six toes are an utter nonsense legend created by our friendly Estonian neighbours, but we get back at them, calling them slow. Why is that important to know? Coming here, you will encounter some friendly neighbouring rivalry with other Baltic states, but it is never malicious. Remember - we are the three Baltic sisters!

3. The centre of the Baltic states is calling you!

So what is the capital of Latvia? First, it is called Riga (or Rīga in Latvian, just say a hard R and pull the following "i" a bit longer). Located exactly in the centre of Latvia on the river called Daugava, this city has long been a hub for merchants and culture. Founded in 1201 by the Germans, over the years, it has become a combination of beautiful urban and natural scenery. This is why some people call it Northern Paris. And being a local, I can assure you, those tiny cobblestone streets and rooftop views from particular places do offer hints of the well-known capital of romance!

When coming here, get ready for a city that is not too busy, has lots of parks and squares, and simultaneously can offer the best bits of a cosmopolite lifestyle. Don't forget to bring comfortable shoes because you can walk everywhere on foot, which would be another great opportunity to see all the hidden corners. Or just rent a bike on the spot and move around like one of those local hipsters! If you did not know what is the capital of Latvia until now, you should research it right away, and you will be surprised!

4. Red-white-red. Isn’t that the flag of Austria?

In Latvia flag is one of the most important national symbols, and it stands for our independence from oh so many intruders. That means - respect the flag and all the daily symbols representing it! So what is the difference from the Austrian national symbol? Well, ours has a much thinner white line and is in blood-red colour. As the legend says, during the war, an injured man was laid on a white sheet to carry him. When he was lifted, a white line stayed in the place where he had been. See how much symbolism and heaviness even in this legend? I am sure from now on, and you will be able to recognize the difference!

5. Beach? Isn’t it freezing there?

If you are used to tropical weather, it really might be cooler here for you, even in the summer, but that does not mean it is just snow and ice! In summer months, it is anywhere between 20C and 30C in air and in seawater; it sometimes reaches up to 20C too. But that is not the main catch here. It is the stunning beauty of those secluded beaches! You can encounter it on the practically whole length of the coastline, which is more than 500km long (imagine, a third of our border!). Just so you know - in Latvia women and men like using this feature for skinny dipping too.

And in most cases to reach the white sandy bounty, you will walk through magical fairy-tale pine forests that reach as far as your eye can see (sideways, of course). And FYI - Latvians enjoy their beaches also in not so warm seasons, and so should you! A walk along the coastline in colder weather (with proper clothing, of course) is super refreshing and the thing you should not miss!

6. This country is basically a never-ending forest!

Well...almost. More than half of our territory is forest land, and one can really feel it. What you should know before you travel to Latvia is - even Riga city has numerous forests and parks, and it's super easy to get out in nature. Locals are drawn to the calmness, nature, and magic silence of those places. Therefore, a popular thing to do for fun is going "out of the city" just to reconnect with mother nature. Another thing you should definitely keep in mind - if you are here for the right season and have enough time, go foraging! Please stay safe and, without a doubt, find someone to guide you to get your first-hand experience in the Latvian essence of forest mushrooms or berries! You see how I phrased it - unless you are a specialist, it is crucial to only do it with somebody who knows what is edible and what is not!

7. Oh, Potato, the king of all vegetables!

Why? Because we love them! If you are also a fellow potato lover, this is the spot for you! Here you will find at least a dozen ways to diversify your potato diet. But jokes aside, Latvian cuisine is so much more than that delicious bulb coming from the ground. Fresh produce from local farmers, forests, or coastal fisheries is all you need for creating delicious and contemporary offerings for your picky (or not so) tastebuds. Just to paint you a picture - imagine anything smoked! But I am sure no words can transfer the heavenly flavours of a great meal. This is why I invite you to come over and let our land (read - produce) bring you on a culinary journey!

8. Why are people so unfriendly?

I think you might change your wording as soon as you hear what I am about to say. Latvians are not unfriendly, but the core of Latvian mentality does contain a healthy dose of restraint and introversion, especially when dealing with strangers. Funny enough, don’t expect too many strangers looking into your eyes or striking a friendly chat while waiting for streetlights to change. Latvians Just Don’t Do That! But don’t take it too personally - as soon as you get to know them a bit better or just get past that “stranger” phase, you will see a different face and get the goodies of being called a friend. If you want to have a laugh about this and get a real glimpse of peculiarities on what to expect from a standard Latvian, just check the comics “Life of I. The introverted writer.”

I have encountered many questions about the Latvia language, and let me quickly answer the most common of those. It is one of the two only ones in the Baltic branch of the Indo-European tree. And no, it is not similar to any other besides the Lithuanian language. Nevertheless, due to numerous invasions and the closeness to many neighbouring countries, it has some influences from Russian and German.

In Latvia, language is another topic of national pride. Latvians still reminisce about the times when the country was occupied, and people could not sing all of their songs in their native language due to the Soviet regime. So before travelling here, it is wise to keep in mind: whenever you speak to Latvians, try to avoid using Russian phrases to "surprise" a Latvian with your knowledge of the local language. It is also good to know that most locals are well versed in English, Russian, and/or German, and in most cases, you should not have problems in getting your message across! Just remember, that also in the Latvia language, appreciated the most is kindness.

10. Do you guys have the Internet in Latvia?

Yes, you silly! Latvia is a well-developed country with one of the fastest internet connections, even in the deep countryside. I am sure this will already get you far. Before coming here, be ready to have a possibility to be online almost continuously (thanks to those cafes with free WiFi or public internet available in many parks). And if work is a thing on your mind - definitely try one of the vibrant local coworking places!

Even if you have not considered coming here thus far, I hope these ten reasons have enticed your curiosity and interest! Let them guide you in having the subtle discoveries of hidden Latvian treasures.