10 things I wish I knew before going to Qatar 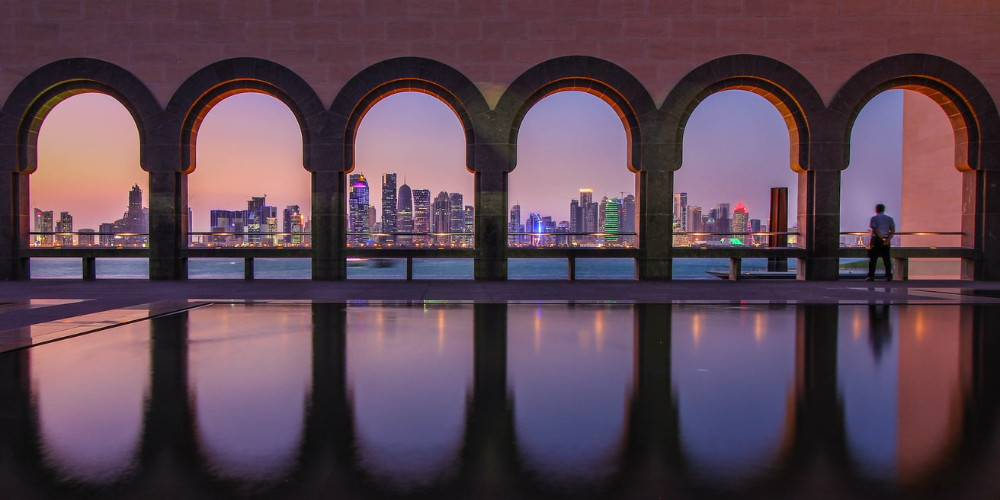 Why apply for a Qatar visa? The state of Qatar is a small Middle Eastern country with a rich history, as evidenced by the excavations of archaeologists, who reveal more and more traces of the oldest civilizations on the territory of Qatar. Before a tourist who has heard the name of the country, the question arises, where is Qatar? To find out where is Qatar, it is worth looking at the world map. Qatar on the map is located in South-West Asia, in the north-eastern part of the Arabian Peninsula, namely Qatar on the map is located on the Qatari Peninsula, which from all sides, except the south, washes the Persian Gulf. The country's rich natural resources have enabled the state to create a wonderful corner on mostly unusable land. Despite the small territory of 11.5 thousand square kilometers, almost two million people live here. Most of the Qatar population is made up of foreigners, main emigrants from neighboring countries, who flock here to find work. All manual labor here is carried out by migrants, while local residents mostly either do not work at all or are given top positions.

And so, a non-poor country would be even richer and more developed if the wages of local workers did not go abroad in money transfers but remained in Qatar. The most notable, of course, is the capital of Qatar-the magnificent and refined Doha, which was founded in 1867 and in 2015 was included in the list of seven "Miracle cities." The capital of Qatar is located in a wonderful place of the Persian Gulf. It has concentrated the whole life of the country and is a scattered city with streets consisting of either traditional two-or three-story buildings or of beautiful and ultra-modern skyscrapers, which are made in the style of ancient Islamic architecture. The roads here do not intersect at right angles, usually, there is a roundabout. The capital of Qatar is still under construction and, although the city is quite dirty, it is not very noticeable. The local international airport, Hamad, is considered one of the best in the world. The country is also attractive due to the fact that the Islamic traditions are softer here compared to the neighboring states, although the Sharia Law works here instead of the Constitution, and the form of government is an absolute monarchy.

As tours to Qatar and Qatar tourism are now known all over the world, so are Qatar Airlines very popular. Operating as Qatar Airways, Qatar Airways is the national Qatari airline with its headquarters in the wonderful city of Doha. The airline is famous for its fairly high level of service and operates international flights to over 160 destinations. Qatar Airlines is included in the list of seven airlines that have the highest five-star rating according to the UK agency Skytrax. Once you know where is Qatar, where Qatar is located on the map and some other interesting reasons for visiting this luxurious country, check out the ten facts that you should definitely read before planning a trip here, especially since tours to Qatar and Qatar tourism are very common destinations.

The climate in Qatar

is marine, tropical. The coolest season is from December to March. During this season, the temperature drops to + 20-30 degrees. In the months from May to September, the average temperature is +40-46 degrees, but it can also rise above +50 degrees. Therefore, when planning tours to Qatar, you should choose the winter months. Rains are quite rare here. It is because of such a dry climate in Qatar that there are serious problems with fresh water, and for this reason, a desalination plant was built here, with the help of which seawater is desalinated.

The country has almost no historical tourist attractions, but there are a large number of other places worthy of attention. For example, Qatar is rich in unique museums throughout the Middle East, some of which are included in the UNESCO list. The National Museum of Qatar, located in the former Sheikh's palace, has a huge aquarium with the fauna of the waters of the Persian Gulf, including historical materials of ancient Arab navigation. In the Ethnographic Museum of the country, which is located in a traditional Arab house, you will get the opportunity to get acquainted with the past life of the local Qatar population, as well as see a magnificent exhibition of national crafts. The Kingdom of Aladdin, which is an amusement park, is located near the capital. There are a large number of tourist attractions, cafeterias, as well as an artificial lagoon and a theater. Sheikh Faisal bin Qassim Al-Thani Museum. In this beautiful museum, you will enjoy the private collection of Sheikh Faisal, with more than 15,000 exhibits, including art and everyday objects and traditional works. A museum is also a place where the world's thinnest double-sided Persian carpet, the world's smallest Koran, as well as a collection of retro cars of the royal family are stored.

Souk Waqif Market is a place where citizens and tourists of Doha buy food, spices, dates, and nuts, perfumes, jewelry, clothing, and souvenirs. The market is also home to art galleries and cafes where you can enjoy authentic traditional national breakfasts. Al-Zubara Fort, a UNESCO World Heritage Site, is located on the northwest coast of the country. Being a coastal city in the XVIII-XIX centuries, it was considered the most important center of trade and pearl fishing in the Persian Gulf. The Corniche is a place for those who prefer walking along the promenade. It stretches across the entire Gulf of Doha. The Qatari Cultural Center, designed in a traditional Arabic style – is a cultural and, at the same time, entertainment area of 99 hectares. The facility is located on the shore of the Western Bay of Doha and has an amphitheater, theater, opera buildings, libraries, galleries, and lecture halls. The Inner Sea of Khor al-Adaid is a bay and, at the same time, a nature reserve that has been included in the UNESCO World Heritage List. It is one of the places on the planet where the sea penetrates deep into the desert. The Museum of Islamic Art is a landmark that houses a large collection of art objects of the Islamic world, which has been created since the advent of the Muslim religion. Dow boats are traditional wooden boats used by the locals to fish and extract pearls. Today, cruises are organized on these boats for lovers of romance in the evening.

is based on dishes containing goat meat, veal, poultry, legumes, rice, vegetables, fresh and canned fruits, including fish, cheese, and egg dishes. On the other hand, being a coastal country, Qatar also offers a variety of seafood dishes, namely, perch, crabs, lobsters, tuna, and shrimp are quite popular. Special attention should be paid to macbous-stewed rice with spices, seafood and meat, served with yogurt, and guzi-lamb, which is baked with rice and nuts. Various spices are widely used, namely pepper, cinnamon, and garlic. Rice or fried potatoes are served as a side dish. Also, the famous rice and bulgur. As a dessert, dates, fresh fruit, halva, and bread pudding "Umm Ali" are common here. All this is washed down with coffee with cardamom or Turkish coffee.

According to the Global Peace Index, Qatar is a country that does not have low-security indicators. Being here, you can not be afraid of anything, but take into account the fact that the country and the capital of Qatar is not designed for pedestrians, it is intended mainly for motorists.

Despite the fact that gasoline prices here are very low, it is extremely difficult to meet public transport here. Most of the Qatar population travels by private car or taxi. Tourists still have to travel by taxi.

40 percent of the population is Arab, and the official language is Arabic. However, most of the local youth know at least two languages-Arabic and English.

Officially, it is forbidden to sell alcohol. You won't find it in stores. For foreigners, alcoholic beverages are sold by only one company. But to be able to buy it from her, you need a residence permit in the country, age over 21, written permission from the employer, and a salary of more than $ 1,000. Even after that, you will get it in a limited amount.

8. Restrictions in the country

One of the limitations is the restrictions on appearance. Traditional clothing for men is dishdasha in white and for women – abaya in black. Although Qatar is a Muslim country, most women do not hide their faces. Despite the fact that there are no such strict restrictions for visitors, the tourist still needs to not dress very provocatively as a sign of respect, namely to open the knees and shoulders here in an indecent tone. There are other restrictions. For example, in order for a Qatari couple to be settled in the hotel, they will be required to provide a marriage certificate. A single man may not be allowed in shopping centers on Friday (Friday and Saturday are days off here) until lunch, their doors are open only to women or married couples. In Qatar, freedom of speech is severely restricted. Here, the law generally does not allow the activities of political parties, there is no opposition, for holding rallies and public criticism of the government can be sent to prison. However, despite the fact that most aspects of local life are subject to the norms of Islam, they are considered less strict in contrast to other Muslim countries. For example, bars and restaurants in hotels still provide alcoholic beverages, and the functions of women in society are not limited. In Qatar, all religions are accepted with respect, there are both Hindu temples and Christian churches.

Getting into the country is not so easy. This can be done at the invitation of local companies from the employer or with the help of a visa, which will be issued by the host hotel. However, the countries of fallen capitalism can get it on entry. Citizenship in this country is simply impossible to obtain. The only option is to be born a Qatari and only from the Qataris. In Qatar, only 20 percent of the Qatar population are citizens, while the other part is foreigners who came here to earn money.

There are plenty of beaches in Qatar, but they are all located in the closed territory of expensive hotels behind high fences. It should be noted that all hotels here are expensive.

Apply for any visa in two clicks!
Topics
Countries
Do you want to get a Qatar visa easily?
Get your visa now 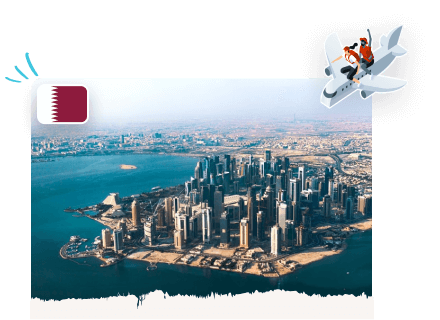