10 things I wish I knew before going to Zimbabwe 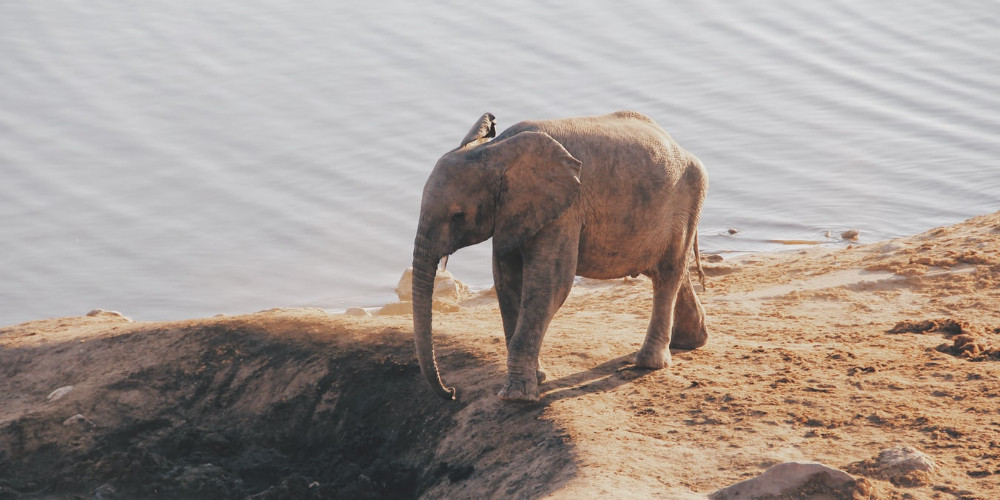 is a beautiful African country, rich in resources and hardworking Zimbabwe people. Despite the political turmoil, Zimbabwe is a good tourist destination. Much of Zimbabwe's tourism industry revolves around its incredible natural beauty. Thanks to Victoria Falls (the largest waterfall in the world) and Lake Kariba (the largest man-made lake by volume), it is a land of excellence. National parks such as Hwange and Mana Pools are teeming with wildlife, making Zimbabwe tours one of the best places on the continent for safaris.

: Zimbabwe is a country that has no outlet to the sea in the South of Africa. It borders South Africa to the south, Mozambique to the east, Botswana to the west, and Zambia to the northwest. Zimbabwe's total area is 150,872 square miles (390,757 square kilometres), making it comparable in size to the U.S. state of Montana. - What is the capital city of Zimbabwe: Harare is a kind of gateway that opens the way for the traveller to the natural treasures of Zimbabwe, including numerous national parks and the world-famous Victoria Falls. The capital of Zimbabwe, Harare, today is a modern city with a developed infrastructure. There are numerous restaurants and cafes with various cuisine, large shopping centres and shops, well-maintained golf courses and an international airport, one of the largest in Africa.

- Weather: In Zimbabwe, the summer months (November to March) are the hottest and wettest. The annual rains come earlier and go later in the northern part of the country, while it is usually drier in the south. During the winter months (June to September), there are warm daytime temperatures and cool nights. At this time, the weather is usually dry. - The best time to visit Zimbabwe: Generally, the best time to visit Zimbabwe is during the dry season (April to October), when the weather is most pleasant. The lack of water at this time of year causes the animals to congregate around rivers, lakes, and watering holes, making it easier to spot them on safari. - Zimbabwe flag: The green colour represents the agriculture and rural areas of Zimbabwe. The yellow colour symbolizes the wealth of minerals. The red colour represents the bloodshed during the War of independence. The black colour of the Zimbabwe flag represents the heritage and ethnicity of the indigenous African peoples of Zimbabwe. The white colour symbolizes peace. The bird symbolizes Zimbabwe history, the red star-the revolutionary struggle for freedom and peace.

- Rhodesia: Rhodesia was an unrecognized state in southern Africa from 1965 to 1979, equivalent to present-day Zimbabwe's territory. Rhodesia was the de facto successor to the British colony of Southern Rhodesia, which had been self-governing since achieving responsible government in 1923. A landlocked country, Rhodesia borders South Africa to the south, Bechuanaland (later Botswana) to the southwest, Zambia to the northwest, and Mozambique (a Portuguese province until 1975) to the east. In the late 19th century, the area north of the Transvaal was chartered by the British South African Company led by Cecil Rhodes. Rhodes and his Pioneer Column marched north in 1890, acquiring a huge swath of territory that the company would rule until the early 1920s. In 1923, the company's charter was repealed, and Southern Rhodesia gained self-government and created a legislature. Between 1953 and 1963, Southern Rhodesia was merged with Northern Rhodesia and Nyasaland to form the Federation of Rhodesia and Nyasaland.

How to get to Zimbabwe?

Robert Gabriel Mugabe International Airport (formerly Harare International Airport) is the main gateway to Zimbabwe and the first port of call for most visitors. It is served by several international airlines, including British Airways, South African Airways, and Emirates. Upon arrival in Harare, you can take a domestic flight to several other areas of the country, including Victoria Falls and Bulawayo, Zimbabwe's second-largest city. Visitors to Zimbabwe will have to check in advance whether they need to apply for a Zimbabwe visa. Guests from the United States, United Kingdom, Australia, New Zealand, and Canada require a visa, which can be purchased at the port of entry. Please note that visa rules change frequently, so wherever you come from, it's a good idea to double-check the latest rules at your nearest embassy.

For a safe trip to Zimbabwe, it is recommended to get several vaccinations. In addition to the usual vaccines, it is strongly recommended to get vaccinated against hepatitis A and B, typhoid fever, cholera, yellow fever, rabies and influenza. Malaria is a problem in Zimbabwe, so you will need to bring preventative medicines. Ask your doctor which ones are best for you. You can find a complete list of medical requirements on the Centers for Disease Control and Prevention website.

Matopos or Matobo hills is a vast granite rock that was formed thousands of years ago. These impressive replicas stretch for more than 30 kilometres. They are located in the Matobo National Park in Bulawayo and are of historical and cultural significance to Zimbabwe. Historic because they were a Ndebele stronghold in the 1800s and were the second Ndebele War site. The great colonialist Cecil John Rhodes is also buried in the area. The hills are of archaeological significance as they prove San communities' existence in the region, as several rock carvings are more than 2000 years old. The national park is also rich in wildlife, and visitors will have plenty to see, including Sable, hyenas, giraffes and white rhino. Visitors can enjoy a horse safari that allows them to get close to the wildlife, as well as a camp overnight in a beautiful African setting. A visit to Matopos will open your eyes, and it is a must-see for those who want to experience Zimbabwe history.

Mutarazi Waterfall is the highest waterfall in Zimbabwe, falling from a height of 762 meters. They are small by world standards but a place of stunning beauty. They are located on the Mutarazi River, which flows through the fertile and stunning Nyanga National Park in the Eastern Highlands Province of Zimbabwe. Adventure activities to expect, hiking in the waterfall area, wild water rafting, and kayaking.

These dolomite and limestone caves of geological interest are an intriguing site, the main tourist attraction of which is the deep blue natural pool; the Dormant Pool, as it is called, is said to maintain the same temperature all year round. The caves have a mystical appeal, as the local elders consider them sacred. A visit to the Chinhoyi caves will provide an opportunity to learn about the historical significance of the caves and the folklore surrounding this mysterious place.

- The Chimanimani Mountains form Zimbabwe's border with Mozambique in the country's Eastern Highlands. It is an ideal place for hikers, as it is the highest quartzite peak in Zimbabwe with amazing views. Chimanimani is also home to the impressive Bridal Veil Waterfall. Visitors can also take a guided tour to nearby Chipinge. Many rare tree species, such as wild orchids and cycads, can be found in the Chirinda Forest. Another great attraction is the Big Tree, a red mahogany tree over a thousand years old!

Zimbabwe tours are not complete without Domboshawa Cave - the perfect place for a one-day tour if you are in Harare, the capital of Zimbabwe. It's a family-friendly place that combines natural beauty, endless open space to stretch your legs, and is far enough away from the hustle and bustle of the capital. Domboshawa is 28 kilometres from Harare; the hills are a historical and cultural monument. The caves are located on a granite hill, which contains impressive rock carvings from the Stone Age. Fun activities include picnics, walks, shopping curios, and a magnificent view of the sunset from the hill!

The Bvumba Mountains are a scenic spot in the eastern highlands, southwest of Mutare. A lush place where a pleasantly cool climate reigns almost all year round. Bvumba has stunning valleys, mountain views, and fantastic hiking trails through lush forests. Bvumba is also home to an impressive botanical garden with a rich collection of azaleas, orchids, proteas and many other flower/plant species. Close to the Bvumba Mountains, the Leopard Rock Hotel is one of the most stunning golf courses globally, offering breathtaking views of every hole!

Zimbabwe… what is a must-see? The ruins of Great Zimbabwe is a historical site worth visiting, the stone buildings were built in the 11th century and consisted entirely of stone without mortar and are among the oldest ruins in southern Africa. The Great Stone City was a thriving political centre in that era. The name Zimbabwe comes from the name of the stone buildings known as "Dzimba-dza-mabwe", which in English means "houses made of stone". In 1986, the ruins of Masvingo became a World Heritage Site. Visitors will get to know this ancient city and learn a little about the people who occupied it. Great Zimbabwe is located near the town of Masvingo, found in central Zimbabwe.

: Hwange is the largest wildlife park in Zimbabwe; it is teeming with various animals: lions, giraffes, wild animals, more than 100 species of mammals in total. Hwange also has the largest elephant population in Zimbabwe. The park offers solid campsites and the developed infrastructure, picnic areas and several luxury cabins. Visitors to the park will enjoy Zimbabwe safari walks, camping under the stars, hunting trips, and cultural visits to nearby villages.

The best way to experience the beautiful Lake Kariba is a weekend boat trip. It is a unique way to relax and enjoy the water up close, definitely worth a try while visiting Zimbabwe. If you have more time, spend five days on a houseboat, park somewhere else every night to watch the game in Matusadona National Park, which will allow you to be very close to the wildlife. Enjoy fishing on the small tender boats provided during the day, relax on the comfortable deck at night and enjoy the sunset and the sounds of nature around you!

Zimbabwe, what to see is Victoria Falls - the most popular resort in Zimbabwe. The next best thing to do after walking through Victoria Falls and walking through the rainforest is to fly over the waterfall in a helicopter. This exciting adventure is known as the "Flight of the Angels". The flight lasts about 15 minutes and offers a breathtaking view of Thunder Falls. The helicopter can fly lower than most other planes, giving you the best view of the waterfall from both sides! For the brave thrill-seekers, the jump from the Victoria Falls Bridge is also amazing. Thousands of people enjoyed this adrenaline-fueled sport! The ankles and body suspensions connected to the rope are attached to you, and then you dive first from the 111-meter bridge down to the mighty Zambezi River. After the jump, you climb back up to the Victoria Falls Bridge and receive photographic evidence of your achievement.

Topics
Apply for any visa in two clicks!
Countries
Do you want to get a Zimbabwe visa easily?
Get your visa now 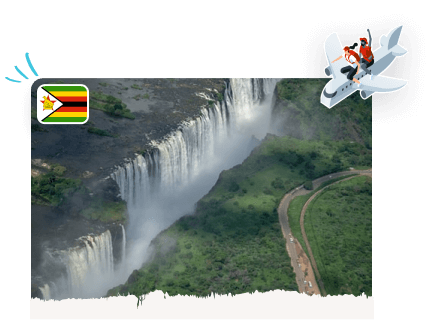