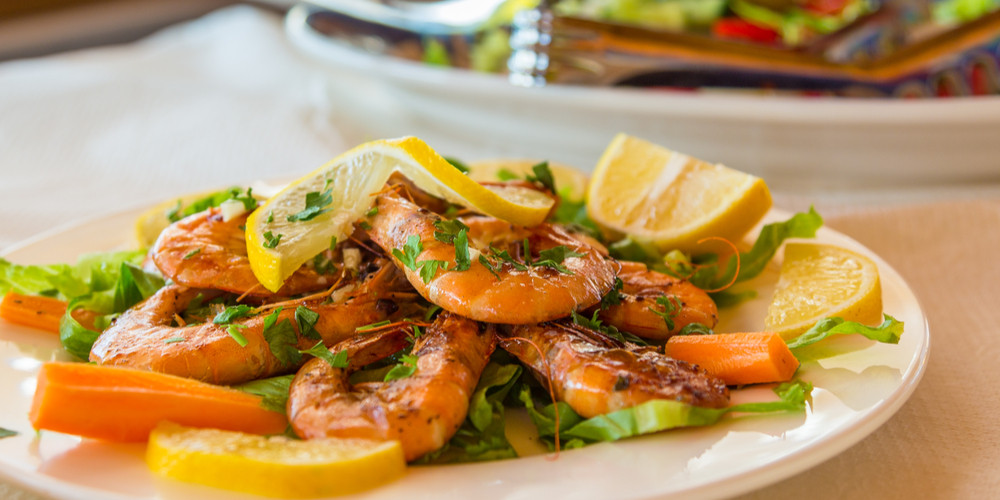 Albania is capable of surprising! This Balkan country is still a novelty for tourists. However, its coastline at the junction of the Adriatic and Ionian Seas, ancient attractions, resorts without tourist crowds, and the local cuisine is worth getting an Albania visa and travel to Albania. Albanian traditional food resembles the Mediterranean, Balkan, and Turkish simultaneously. Here they cook a lot of beef, lamb, poultry, fish, seafood, combining them with vegetables, rice, herbs, and garlic. Olive oil is added everywhere. In the northern regions, a lot is prepared from corn: it is ground into cereals or flour and used for cereals, baked goods, desserts. In the south, the variety of dairy products is impressive, especially soft cheeses and yoghurts. We have selected 10 Albanian culture foods. Albanian culture food remains a mystery to many travelers, as this country cannot yet be called a popular tourist destination. Suppose you plan to get an Albania visa and travel to Albania, then in each region. In that case, you will discover something new, interesting, and unusual (first of all, this applies to food in Albania, and only then to sights and nature). Albanian traditional food is little known outside the country, so everything you find on the menu of local cafes and restaurants will be new and unusual for you. Albanian food names on the menu are not duplicated in English, so if you have any questions about a particular dish, it is better to discuss everything with the waiters (many are fluent in English). Below you can find 10 Albanian food names:

What is the most popular food in Albania? The most popular and widespread food is Ferges. Its main ingredients are peeled tomatoes, red and green peppers, cottage cheese, onions, and various spices. All these ingredients are baked until a thick consistency is composed of vegetables. Although the dish is hearty, it is often served as an appetizer with bread (for dipping). Usually, one serving is enough for two. The serving price of this dish rarely exceeds $ 2-2.5. The Ferges Tirane Albanian food recipes come from the capital of Albania. The dish is a cross between a stew and a vegetable casserole. Ferges is made from sweet peppers, tomatoes, sometimes onions, and carrots with cottage cheese or soft cheese. First, vegetables are fried and baked in a pot, and Albanian cottage cheese "jiz" (gjize) or feta. Vegetables baked in a ceramic pot in yoghurt with salted cheese a la bryndza. The Albanian food recipes for a juicy Tyrant casserole have spread all over the country. It is served as a side dish for meat or as an independent vegetarian dish. Try this food in Albania if you like this food combination.

In Albania, meat dishes are high esteem, especially veal and lamb. Among them is the Tave Kosi dish. It is prepared by pouring it with yoghurt, an egg and then baked and served in earthenware. The result is similar to a meat pie, but the meat is very juicy and tender. This is one of the most popular dishes in the country, and you will have to pay only about four dollars for a large portion of this delicacy. This is baked lamb with a yoghurt topping. Pieces of meat are baked with rice in a mixture of yoghurt and eggs with herbs and garlic. The dish acquires a delicate texture and even looks like a pie due to the golden-brown crust of baked yoghurt. This is a festive dish that was previously prepared for the family on a special occasion, but now it can be tested any day in Albanian cafes and restaurants. So if you ask what is the traditional food in Albania, we can answer that it is Tave Kosi. Delicate lamb meat baked in yoghurt and porridge under the funny name "trahana" from corn flour. This food in Albania will be served to you in an earthenware pot or special aluminum dish. It squirts right in front of your eyes. You should try this food in Albania if you like lamb!

- Pepper with sour cream The original Albanian food name: Speca te Mbushur me Salce Kosi, translates as "Peppers with yoghurt sauce." It is a popular traditional Albanian food served as a side dish to meat or as a separate dish. In the classic version, pickled green peppers are stuffed with a yoghurt and cream sauce and then grilled or baked. But other bell peppers can also be used.

What is the traditional food in Albania - is Gjirokastra's signature appetizer is one of the most authentic and typical Albanian dishes, albeit reminiscent of Italian arancini. These are rice balls with eggs, herbs, less often cheese or meat. Sometimes they are breaded and deep-fried. You can try Qifqi right on the street, and at the same time, see how they are prepared. They are sold in cones of several pieces.

A great option for an Albanian breakfast is easy to prepare yourself. The main thing in these Albanian food recipes is more greenery. Spinach, dill, parsley, and green onions are mixed with egg, yoghurt, and cornflour and then fried on both sides. The result is a delicate pie with a crust. In addition to herbs, you can add soft cheese or cottage cheese there.

To know how many different food are in Albania, you should try Flija. Incredibly tender pancake cake is usually made sweet, with a creamy honey filling, but there are also salty recipes. Flija is a traditional Albanian food for holidays. Pancakes, sometimes made from cornmeal, are fried in a dry pan and resemble thin pita bread or flatbread. Then they are greased with filling and put in layers in a special large frying pan, baked over an open fire.

Turkey is loved here no less than in the United States, but it is cooked mainly for the New Year. The poultry is first boiled in herbs and then baked with a side dish and vegetables. Pershesh is made from crushed homemade bread soaked in broth; spices are added and baked with turkey. A simplified version of Gjel deti me pershesh, offered in many cafes, is chicken with pepper. According to the cooking method of turkey, you can see how many different food are in Albania.

What is the most popular food in Albania? Of course, seafood! The Ionian and Mediterranean seas wash Albania, so fish and seafood are integral to the local cuisine. Coastal cafes offer a very large selection of such dishes, and they are usually prepared only with fresh produce, not frozen. So, if you ask what is the traditional food in Albania, we can answer that it is seafood. I don't know why, but just like in most other maritime countries, seafood and fish dishes are more expensive than meat dishes, although even these products are moderately priced in Albania. This is something that definitely should not be missed. Grilled dorado, squid, shrimp, scampi, and octopus can be found in almost every seaside restaurant in every resort. But Saranda, a resort in the south of Albania, is considered a Mecca in this respect. Here, local fishermen are ready to cook freshly caught fish in front of your eyes. The cost of seafood in Saranda is encouraging, although food prices in Albania are affordable everywhere. And this is another plus of this area, which is only gaining momentum in tourism.

The traditional Albanian fish soup is called Supe Peshku. It is cooked from sea bass or sea bass with vegetables: zucchini, carrots, sometimes white beans, herbs, and leeks. All ingredients are cut coarsely enough, and the broth remains transparent. Local rolls or corn tortillas are served with the soup.

What is the most popular food in Albania? One of the most popular foods in Albania is Shendetli. They also know a lot about desserts in Albania. The traditional Albanian dessert is called Shendetli. For its preparation, simple, uncomplicated ingredients are used, but at the same time, an unusual taste is obtained. The dessert is made from sugar, soda, flour, and eggs (honey and walnuts are often added). After baking, the dessert is poured with a hot syrup of water and vanilla sugar, after which it is stopped overnight to soak. A piece of this delicacy will cost approximately one dollar. Shendetlie is a real oriental sweetness. This food in Albania is served with coffee, and it is this combination that truly reveals the taste of Shendetlie. This is a wet biscuit soaked in syrup, to which vanilla, nuts, and sometimes cocoa has been generously added. For dessert, it is best to choose a sour jam or confiture, such as citrus or blackberry, to balance the sweetness of the dessert. From non-alcoholic drinks, I advise you to turn to the drink, traditional for all Balkan countries, called bozu, only in the Albanian version. The distinctive feature is that it does not contain alcohol at all. I use water, sugar, corn, and wheat flour to prepare this drink. The result is a slightly foaming and illuminating drink that is a lot like soda. At one time, it was the most popular drink in the country, but now the traditions of its preparation are forgotten, but if you look, you can find it (especially in the north of the country). In addition to the fact that the drink is useful, it also has several useful properties, especially beneficial for the cardiovascular system. Albanians are very fond of tea, especially mountain tea, called "mali tea." This tea is divided into southern and northern. When ordering this tea, this issue must be clarified since the northern one is bitter, and not everyone will like it, but the southern one has a pleasant, delicate taste and can be drunk even without sugar. If you do not like the local tea, you can order ordinary loose or tea bags in any cafe. Albanian cuisine is somewhat similar to the Balkan and Turkish dishes, but the locals have adapted them. They are very fond of meat, spices, fresh vegetables and cheeses. In addition, it is an important fact that the use of pesticides in agriculture and animal husbandry has been minimized on the territory of Albania. Therefore, all vegetables, fruits, dairy, and meat products are incredibly tasty and healthy. So it is worth it to get an Albania visa and travel to Albania. Albania is a meat-eaters paradise. There are always many lamb, chicken, veal, goat meat, and beef dishes. Now you know what food to try in Albania. These are our top Albanian traditional foods, and you can see now how many different foods are in Albania. We are sure that you will appreciate the peculiarities of the national Albanian cuisine.

Topics
Apply for any visa in two clicks!
Food, Hotel, Restaurant
Do you want to get an Albania visa easily?
Get your visa now 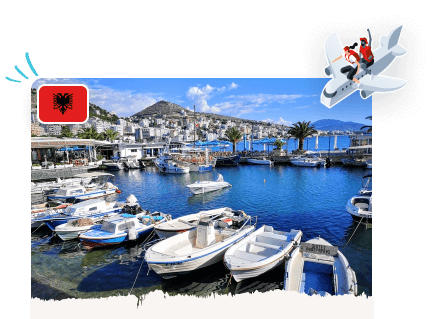