Anyone even mildly interested in anything edible must be well aware or at least have some impression about the humongous role of French cuisine to almost any modern-day dish, chef, and restaurant. It is the mecca of classic recipes and techniques, the very sought destination for almost any aspiring chef and pastry chef looking to get their hands dirty and rough up around the edges to make it in the rough culinary world.

But how about the local foods to try in France? Which are the things any traveler should put in their hungry mouth to understand the culinary heritage of this gastronomic heavy-weight? It would be no fun if I were to describe dishes that everyone already knows - let's leave baguette and onion soup out of the picture and see what foods do you have to try in France to get a more intimate look at what they have to offer. Through this list of top 10 foods to try in France, my goal will be to reveal some specific local dishes and tell more about the history, local legends, and other aspects that have made these dishes especially prominent and beloved. Both in the eyes of locals, and recently more so - among foreigners, too. But first, to realize this much-wanted trip, find out if you need a France visa or not.

So what are the top 10 foods to try in France, in my opinion?

It is basically a pie with a rich, savory, buttery crust filled with delicious savory custard and many other ingredient options. The best known of quiche family members is quiche Loraine, with eggs, cream, and lardons. But the truth is, if you are in France you should aim to try other types of quiche pies! According to popularity, the most prominent followers in the line are quiche Florentine (with cheese, spinach, and fresh herbs such as rosemary and thyme) and quiche Provencale (a vegetarian version that features a row of vegetables like zucchini, tomatoes, onions, or bell peppers). But you may choose whichever filling suits your taste best because quiches are just great!

It is a story of how a simple regional dish can become one of the most expensive best-sellers in the country. Bouillabaisse is a rich seafood stew that fishers in Provence used to prepare from the leftover catch. Nowadays, upscale restaurants can cost up to 200 EUR a plate and consist of various expensive fish and seafood items like crabs, mussels, lobster, eel, and other high-end sea delicacies. What makes it distinctively different is the bright red color and the way it is served. The thick, rich soup is served with garlic-rubbed bread separately from the seafood. And, of course, the absolute necessity is the particular aromas of Provence - saffron, fennel, and orange zest, white wine, and anise liquor. Pay attention to the fact that most people in France would consider anything that costs below 50 EUR an ordinary fish soup!

Seemingly simple, but especially loved is this ham sandwich with gruyere and parmesan cheeses, as well as bechamel sauce. Famously created as an accident, this has become one of the top foods to try in Paris, France. It is said that back then, a worker had left his sandwich on a radiator only to find out that the cheese had melted inside. It was back in 1910, but nowadays, it can be found in almost any Parisian restaurant menu. Of course, with modern variations and additional ingredients.

I am a fan of soups, and this is one of my dearest foods to try in France. Because it is a soup, and it is made mostly of potatoes. Who doesn't love a hearty, rich potato cream soup on a cold winter's night? This French version features another star ingredient - leek. Basically, a creamy and warm yumminess that hugs you from the inside. Let me say, and this is one of the recipes that you can easily make yourself at home without even going to France! Ready to try some of their flavors already now?

Many countries with rich meat-eating cultures have used the whole animal, a tradition since ancient times. It is where a very common tradition of blood sausages comes in. France is no exception, and their version is called boudin noir. Compared to other countries' similar cousins, this one is made with pork, fried onions, fat, and blood. They add rice or other grains, apples, or other ingredients in other countries, but the French stick to a very basic recipe. The most common way to eat it is fried in the oven, with apples and Calvados glaze. The flavor is particular but very delicious if you are accustomed to eating more than prime cuts of the meat!

For most, the first idea that comes to mind when mentioning pate is a creamy spread made of liver and some other ingredients. However, the French thing is the type that goes in a small jar and mostly looks more like a terrine (pieces of meat that are held together by either fat or butter-based mass) but is eaten cold. My french friend once even gifted me a snail pate! Other options would include the already mentioned liver spread or various cuts of meat baked inside a crust. Another dish with many variations - check the one that appeals to your taste the most and enjoys!

Many would name crepes among other local foods to try in France, but everyone knows them, so I will highlight their savory sibling. Breton galette is a savory crepe made from buckwheat flour and filled with fried egg, ham, or other things like a mushroom sauce. If you are eager to try something a little more different, aim for this pancake. Galette, in French, by the way, means a flat round cake that can be either sweet or savory. Google other types of galettes to get a more detailed impression about another few dishes to try!

It is a very special type of cheesecake from the Poitou-Charentes region in France. I had the luck to try it once with my friends' parents and to be honest, and the first impression was underwhelming. A black, burnt loaf of bread. That was what I thought on the spot. When it was cut open, I was still not overly excited, but when I put it in my mouth...it was unexpectedly mind-blowing. Cold sensation (as right out of a fridge), the exactly right amount of moisture, and an airy spongy texture that melted on the tongue with a creamy-cheesy flavor. Made with goat cheese in a particular technique to burn one side of the cake, France barely knows it. Try if you have a chance!

Everyone knows Paris for eclairs and macaroons - the staple of any patisserie and shopping basket for a gourmet with a sweet tooth. However, let me tell you at least one of the foods to try in Paris, France, that will be in the same category of delicious, but way less common. It is a choux pastry ring filled with praline flavored cream. Suppose you don't know what choux is (spelled just like "shoe"). It is the same dough as for eclairs. This pastry is round in shape, just like a bike tire - made to celebrate the bicycle route from Paris to Brest. And hence, the name, too!

Let's conclude this list of ten foods to try in France with one of my absolute favorites. And I am not talking just about the universe of French desserts. It is a tart, meaning - a crispy shell of buttery dough. Then it is filled with a paste that is made from ground almonds or almond flour and topped with fruit by choice - usually, pears, plums, or apples. The best thing about this tart is the creamy flavor of the baked almond filling because it becomes like a warm and delicious thick custard that tastes completely like marzipan (with hints of other flavors that have been added). Best eaten warm, with a dollop of vanilla ice cream!

To conclude this list, I just want to congratulate you on looking into this country's heritage with centuries of culinary tradition. Understanding what foods do you have to try in France is the first step to a deeper appreciation of all the resources it has invested in the development of the most delicious dishes for their royals throughout the years. Accompanied by ingredient-bearing conquests, the French table is probably one of the most elaborate nowadays. It is why I truly hope that this list of ten foods to try in France will be a good starting point for your tastebuds. Still, the additional information I mentioned will give a greater understanding of the complexity of this cuisine. And evermore fittingly - a heartfelt bon appetit to you!

Topics
Apply for any visa in two clicks!
Food, Hotel, Restaurant
Do you want to get a France visa easily?
Get your visa now 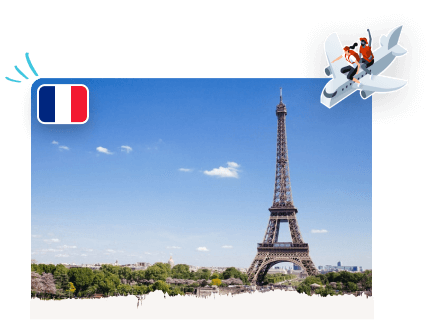