20 Top places to visit in Chad 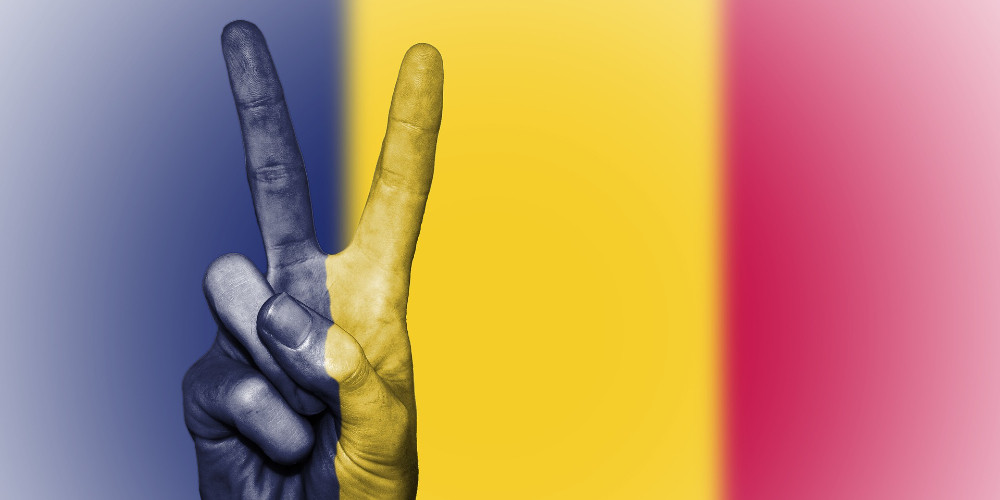 ? The Republic of Chad is located in the centre of the African continent. Due to its location and climate, the landscape in different Chad regions is represented by flat, flat deserts, rocky highlands with many craters and extinct volcanoes, savannas with an abundance of rare plants and animals. What is the population of Chad? The population of the Republic of Chad is 10.5 million people, which are divided into 200 ethnic groups. Surprisingly, only 20% of the population of Chad lives in cities. The nature of Chad captivates with its unique beauty. Today, Chad's tourism is still a new direction, known only to true lovers of this wildlife in its original form. We have selected the top 20 top places to visit in Chad to explore the culture and nature of Chad:

One of the historical places in Chad, Abeche, is the oldest city that used to be the capital of the Kudan Sultanate. It is still filled with oriental charm. In Abeche city, you can visit the Sultan's palace, the old cemetery, see the ruins of medieval mosques. Old markets where you can buy spices and handicrafts are preserved here. Clay and bones souvenirs, mother-of-pearl jewellery, African dishes, and colourful local clothes are still sold on the market shelves to this day. In the city, you can see the ruins of the ancient city walls, old clay houses. There is only a desert around the city for many kilometres and dry river beds filled only with rainwater.

The N'Djamena Grand Mosque is located in the capital of Chad, N'Djamena, opposite the colourful central market. This is the main attraction of the African people. French colonialists built a Muslim shrine in 1978. Since then, to this day, many Muslims come to pray in the mosque. Often, tourists enter the mosque to enjoy the sight or to hide from the bustle of the city and relax in a calm atmosphere.

The N'Djamena National Museum is one of the best places to visit in Chad preserves the history and culture of the ancient civilization of Sao located in the capital of Chad. Here you can see many petroglyphs - rock paintings, tribal household utensils and their musical instruments, ritual masks, and jewellery. As well as many interesting prehistoric exhibits. For example, the oldest hominid skull found here - our ancestors, who lived 7 million years ago.

The Grande Marche Central Market is considered one of the best places to go in Chad. All tourists who come to N'Djamena seek to visit the largest metropolitan market. Merchants have almost everything on sale! Of course, there are many African souvenirs, jewellery, household items, and unusual food on the shelves. But on the sale, you can find even antiques! Locals know a lot about trade - with the right bargain with the seller, the price can be reduced by four times. The emotions of visiting the market are extraordinary! Indeed, in addition to the rush of trade and communication with residents, you will have a huge number of gifts and goods at low prices.

Lake Chad is the heart of the continent. Due to its size, it was even called the African Sea. It is the largest body of water in Central Africa, as well as the most important waterway in Chad. The reservoir is surrounded by palm trees and baobabs, reeds, and acacias, which are simply not typical for such arid places. The relict lake contains many mysteries. The water in it has a unique feature - it is slightly salted. People and animals even drink it. Dense tropical forests populated by birds grow along the shores of the lake. Here passes the border of natural zones. To the south of the lake are the savannahs of Sudan with tall grasses. And to the north extends a huge sultry Sahara.

Another one in the list of top places to visit in Chad Shari River is the main artery of Lake Chad. The river carries up to 90% of all the water that fills the lake. Balls spread throughout the channel into many sleeves. During the rainy season, water fills Lake Chad and all surrounding ponds. Often there is the flooding of settlements located in marshy areas. The river never dries out completely, unlike many other rivers of the republic.

The Sahara Desert covers more than 9 million square kilometres. This is undoubtedly one of the most beautiful places in Chad. Another interesting fact is, Sahara is the largest desert in the world. It stretches from the Red Sea to the Atlantic for 5 thousand kilometres in length and about a thousand kilometres in width. Flat sandy areas give way to high dunes and barchans, mountains, and lush oases. The desert climate is harsh and arid. Sandstorms are not rare here. A layer of sand in the desert reaches a thickness of 150 meters. But only a quarter of the desert is covered with sand. And the rest of the desert is occupied by no less severe cliffs and highlands. Even drought-resistant plants cannot survive here. Life is possible only on the banks of reservoirs in oases. There are very few animals in the Sahara desert; everyone needs water and food to live. It is hard to believe that 4 thousand years ago, the Sahara still had a humid climate, and all of it was covered with forests. The lakes were not so salty, and the fauna and flora were incredibly rich.

The Tibesti Highlands rise almost 3 kilometres above the sands of the Sahara. This mountain plateau covers an area of 40 thousand square kilometres in the middle of the largest desert in the world. The peaks of the highlands are the craters of many ancient extinct volcanoes. Especially large sleeping volcanoes rise in the corners of the highlands: Emi Koussi (3415m), Tousside (3265m), and Mouskorbe (3376m). Rocks create a unique labyrinth of gorges, caves, and canyons. Unlike other regions of the republic, snowfalls every year in Tibesti. About 15 thousand people live in these places in Chad, mainly nomadic Tubu tribes. People are engaged in cattle breeding - raising goats and sheep, camels and donkeys.

Amy Koossi is a huge sleeping volcano on the highest mountain in the Sahara and Tibesti. Its height is 3415 meters. Its crater is covered with a layer of salt, which remained from a dried-up lake. Hot springs beat on the slopes of the volcano, and in the caves of Emi Koussi, there are many rock paintings of ancient people. Carved on the vaults of caves, drawings depict animals that inhabited these lands thousands of years ago. Crocodiles and giraffes, elephants, hippos left these places in Chad with the onset of the desert.

The stratovolcano Tarso Voon is located here, in the highlands of Tibesti. This is a very ancient volcano, its slopes are composed of basalt, and the fragments of its eruptions are scattered within a radius of 30 kilometres. At a distance of 5 kilometres from the volcano, hot springs and mud baths are still active. Tourists and the population of Chad use them for medical purposes.

The Ennedi Plateau is a grand maze of rocks and stones and one of the best places to go in Chad. This is a geological anomaly covering an area of 60,000 square kilometres. Caves, ponds, and stone arches grow out of the sand like sculptures. At the beginning of the XX century, many petroglyphs were discovered on the rocks - rock paintings, thousands of years old. Ancient people here depicted animals and people, horse riders, and warriors. This is an open-air art gallery.

is the most famous and largest reserve of the Republic of Chad. The largest park is built on a swampy area, where 50 species of mammals live. Here you can meet herds of serval, giraffe, and elephant. The predators living in the park are lions and crocodiles, as well as unique representatives of the fauna, for example, the water goat and baboons. Many of its inhabitants are listed in the Red Book, and the park's territory is guarded by an armed convoy to avoid poachers. The park is located on the banks of the Shari Rivers and tributaries. There are about 250 species of birds in the park. Here you can observe the life of animals in their natural conditions.

Manda National Park is a natural reservation near the city of Sahr. The park is a national treasure of the Republic of Chad, despite the fact that it is not part of the largest parks. It is smaller in the area and less popular, which allowed nature to remain natural here. Flora and fauna of the park look the same as hundreds of years ago. The pristine savannah with wild animals attracts tourists and explorers from around the world.

Siniaka-Minia Faunal Reserve is covered in the lush greenery of trees and grasses. The park has a vast variety of rare mammals and birds. Here you can see wild animals in their natural environment. Giraffes, antelopes, and lions live in large numbers here. There are not many tourists in this reserve, so life here always flows calmly and serenely.

One of the interesting places in Chad, the Fada Archei Faunal Reserve, was founded in 1967. Land with an area of more than 2 thousand square kilometres was created primarily for the protection of Barbary sheep. This is a transition zone between two deserts - the Sahara and the Sahel. On the rocky territory of the reserve, there are gorges and several large ponds. Endemic fish that can survive drought by burrowing in silt inhabit the local waters. Along, the banks grow cattail and reeds. Also on the territory of the reserve are large representatives of the cat family - panthers.

Being one of the most beautiful places in Chad, Faya is also one of the largest and driest oases of the planet, surrounded by fantastic beautiful rocks. The walls of sleeping volcanoes protect the oasis from the onset of sand. In his shadow is the Fada city. The road to the oasis's sights is more accessible than the path to the mountains, and the views are also beautiful.

Guelta d'Archei is a rocky oasis with fresh water which even have fish and algae. On the shores of the gelts, rare representatives of the fauna can be found. Nile crocodiles live here. And numerous herds of camels come to the watering place. It is difficult to get here. You will need an SUV or a camel. On an SUV, the path from the capital of Chad will take more than 4 days.

Gaoui Village is the ex-capital of the Sao tribe. According to legend, giants lived here in ancient times. Now the village is famous for its potters and traditional architecture. In addition, excavations are ongoing in this area, and exhibits are exhibited at the local museum. Tourists enjoy exploring the culture and history of the Sao tribe.

Lake Katam is a small beautiful reservoir in one of the oases of the Sahara. Sand divided the lake into two parts, and over time, the water in one half turned blue, and the other turned pink. Moreover, water in one part of the lake is saltier than in the other part. Locals extract salt on these shores.

And the last one in the list of top places to visit in Chad, Lake Yoa is a drainless salt lake in the Sahara. Rains are too rare for this region. The Sun daily evaporates water from the surface of the lake. In total, so much water evaporates into the atmosphere that the lake level would fall by 6 meters per year. But Yoa does not dry out. Every day underground sources fill it. Sometimes the water gets less, the salty rocks of the lake are exposed. The water here is so salty that only some seaweed can live in it.

Topics
Apply for any visa in two clicks!
Countries
Do you want to get a Chad visa easily?
Get your visa now 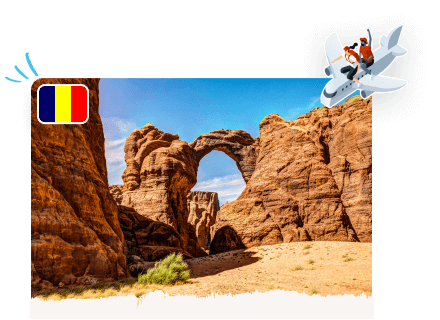