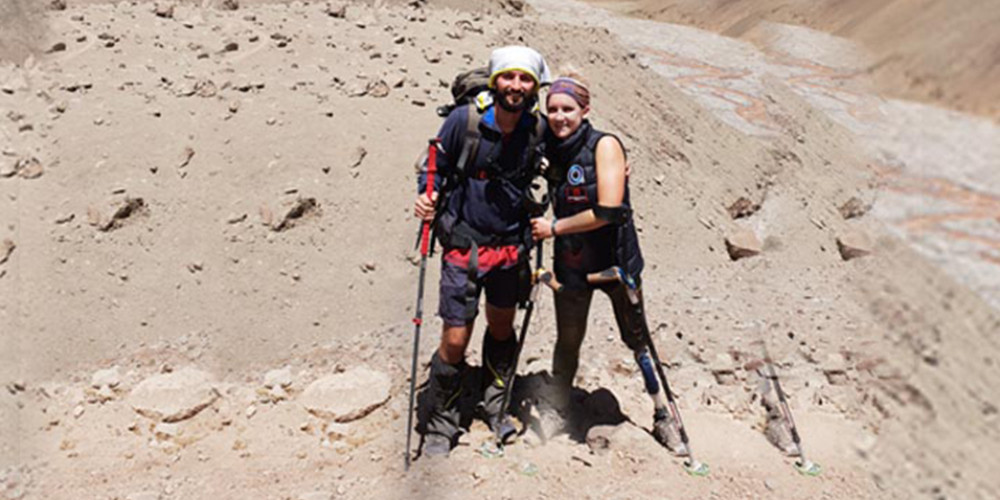 I have witnessed much persistence on the way to Mount Aconcagua. But three of them left a special trace.

The woman you see in the photo is Helen, and her leg is artificial. When we were climbing Aconcagua, she was returning. I met her on the way. Mechanically, I asked her: "You did it, right?" I would feel bad for such a resolute question if she said “No.” She said: "Of course, I did!" I hugged this woman, who I met the first time in my life and probably will never meet again as if I know her for many years, and asked if I can take a photo with her. She accepted it very sincerely.

On the summit day, there was a woman around 40 or 45 years old in one of the groups going ahead of us. On halfway, she was so tired that she was just creeping and was almost falling. Although she stumbled a few times, she kept ongoing. There is a road on the final principal part of the summit Canaleta, which is very difficult because of snow and the steep on one side. When she reached the middle of the lane, I was resting. I saw that she is completely out of energy and very tired. Unwillingly I told the guides that it is very dangerous, and she can roll down the precipice. I hardly finished my word when she fell. The whole team was in shock. Everything was just as in the movie. I slightly lifted my head to see what has happened to her, and I saw that she stuck her stick and stood at 2m below the lane. Two guides reacted promptly and lifted the woman back to the lane. I was sure that they would return her down to camp. Nevertheless, when I reached the summit, I had my second shock of the day. She was standing on the summit and taking photos…

It was our first morning at the Confluencia camp. There is a high hill next to the camp from where a good view is opening to the camp. In the morning, I climbed it up. There was a man sitting there and taking a photo of the camp. I approached him and started the conversation. He was Romanian. He already climbed the mountains Kilimanjaro, Elbrus. And said that he was in Aconcagua Mountain last year but returned from 5400m. I asked the reason for the return, and he said: “My hands were hurting very bad.” At that moment, I could not understand what he means. What do hands have to do with climbing?! But I felt shy to ask him to clarify; maybe he had a specific reason. I waved off and moved away to take some photos too. 5 minutes after, this man stood up. What seemed to me as the walking poles were support sticks, in fact. His legs were cramped, and he walked up all these mountains with the help of his hands (supports). Last time, I saw him at the Plaza de Mulas camp (4200 m). Everyone was waving him off. He was very tired, and people helped him to mount the horse. All the mountaineers, whether they know him or not, stand there next to him. He galloped and disappeared from the view under the applause of all…