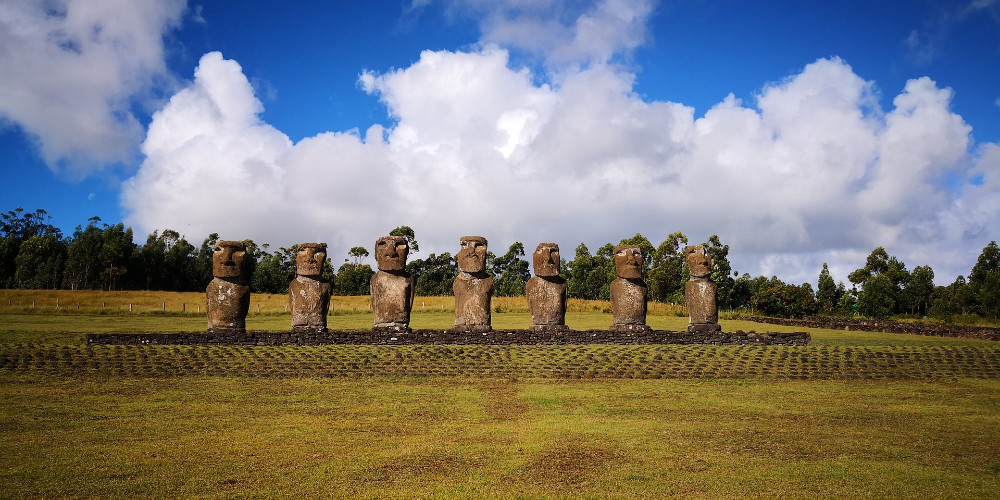 One of the interesting facts about Easter Island is the time of people coming here for the first time. It is thought that the people of Polynesia came to Easter Island in 1200 A.D. After the existence of habitation in the Island, agriculture began to develop rapidly. Europe became aware of the Island in 1722. The Island had about 2,000 to 3,000 inhabitants by then. In 1888, Easter Island was subordinated to Chile. In 1966, the islanders were granted citizenship in Chile. In 2017, according to the Chilean population statistics, 7750 residents lived on Easter Island. One of the characteristics of Easter Island is it is being one of the most remote locations in the world. The nearest habitation place to the Island is Pitcairn Island, 2075 km away. The Island is at 3512 km distance from Chile. Jacob Roggeveen, a Dutch explorer and traveller, who came to the Island for the first time from Europe, to search for "Davis Land." French ethnologist Alphonse Pinart named the Island the "Navel of the World" in his 1877 book "Voyage to the Easter Island."

The Island has a triangular shape and has an area of 163.6 square kilometres and a maximum elevation of 507 meters (1,663 ft) above mean sea level. It has no streams and no freshwater source. Easter Island is composed of extinct volcanic mountains covered by vegetation. What to do in Easter Island? One of the characteristics of Easter Island regarding geography is a volcano. Volcanoes’ being visited by many tourists who travel to Easter Island every year is one of the interesting facts about Easter Island. There are three extinct volcanoes: Terevaka volcano is located in the centre of the Island, Poike volcano to the east, and Rano Kau volcano to the south of the Island. The crater Rano Raraku and Puna Pau and many volcanic caves are the main tourist attractions.

When to travel to Easter Island?

Both humid subtropical and tropical rainforest climates dominate in Easter Island. The lowest temperatures are recorded in July and August (minimum 150 C), and the highest in February (maximum 280 C). The island experiences year-round rainfall. The rainiest month is May. Sometimes heavy rains and storms prevail on the Island. It mostly occurs in winter months.

Scientists believe that the original settlers from Polynesia brought the rats, albeit unknowingly. The rats caused the disappearance of part of the area where the Rapa Nui palm grows. Some scholars point out that the rats played a role in the degradation of the Easter forests along with the palm trees. During the study, it was found out that less than 10% of plant species had teeth marks from rats. Dates are not only destroyed by mice but also by humans. The clearance of the dates on fertile soil for the construction of human habitat led to their extinction on Easter Island almost 350 years ago. Not only palm trees, but also other essential and native types of plants in Easter Island have also been destroyed by human activity. The Toromiro tree (Sophora toromiro) was prehistorically present on Easter Island but is now extinct. Currently, the Royal Botanic Gardens, Kew, and the Goteborg Botanical Garden are jointly leading a scientific program to reintroduce the Toromiro to Easter Island.

Due to the density of the leaves of the Toromiro trees, there was enough - less rain on the Island. Because of the destruction of the trees, the Island's land began to receive large quantities of rainwater, which resulted in the formation of meadows on the Island and the growth of different kinds of plants in Easter Island. After the Island started to be used to feed the sheep, it was mostly covered in various species of grass. The reed called Totora in the Andes was also rooted in Easter Island. These types of plants in Easter Island were used as a support in the construction of historical Easter Island statues and were incorporated into the cement cover. However, according to some studies, these reeds have grown on the Island for over 30,000 years. Before the arrival of humans, Easter Island was considered the homeland of vast seabird colonies containing probably over 30 resident species, perhaps, the world's rarest and most beautiful. These birds are no longer found on the Island. Research has revealed that the species of six blackbirds (two species of parrots, two species of owls, and two species of heron) have been exhausted. Besides these species, the scientists have concluded that there are five other species of birds existing not in Island but the suburbs. However, they fly to the Island permanently, and their reproduction is possible on the Island. It has found out that the coast of Easter Island and surrounding areas are breeding grounds for humpback, southern blue, and pygmy blue whales. The existing coastal relief and ocean waters are entirely consistent with this process. Potential breeding areas for fin whales have been detected off northeast of the Island as well.

One of the interesting facts about Easter Island is that the Rapa Nui people had a Stone Age culture and made extensive use of local stone. Basalt, obsidian, and other types of ordinary and volcanic rocks were used for various purposes. Easter Island statues, well known as Moai, which are featured in every travel book, featured in every travel article, have been explored by Pater Sebastian Englert. It was identified that 638 stone statues out of 887 have similarities. According to Englert's research, the number of these statues was initially more than 1,000. Over time, the numbers have been decreased due to erosion or other reasons. Although numerous researchers have repeatedly investigated the Moai statues, it is still unclear why they were built. It is thought that the statues were built between 1000 and 1600, as the exact date is unknown. Presumably, the figures depicting the man's head are the means of communication of the locals with the spirits. The giant Moai statue among these statues is called Paro. It weighs 82 tons and is 10 meters long. All Moai statues in Easter Island are almost the same height and are about 11 meters. The weights are also 55 tons. These statues were carved from solidified volcanic ash or tuff found at the east of Island on volcano Rano Raraku. The sculptures were placed on platforms called Ahu. 180 and 250 people were required to move one of the Moai statues in Easter Island. Some 50 of the sculptures were re-erected in modern times. One of the first was on Ahu Ature Huke in Anakena beach in 1956. It is assumed that these statues were relocated. However, it is unclear how and why they were transferred. Possibly, they were dragged by rope. Heads of some figures were broken due to the dragging.

The Ahu platforms are large platforms built in the plains, with Moai statues on them. Ahu Tongariki has the most and tallest Moai, 15 in total. William Mulloy explored this platform in the 1960s.

Tapati Rapa Nui Festival is an annual two-week-long festival celebrating Easter Island culture. Traditional cultural activities such as competitions, cooking, woodcarving, and others are presented at the festival.