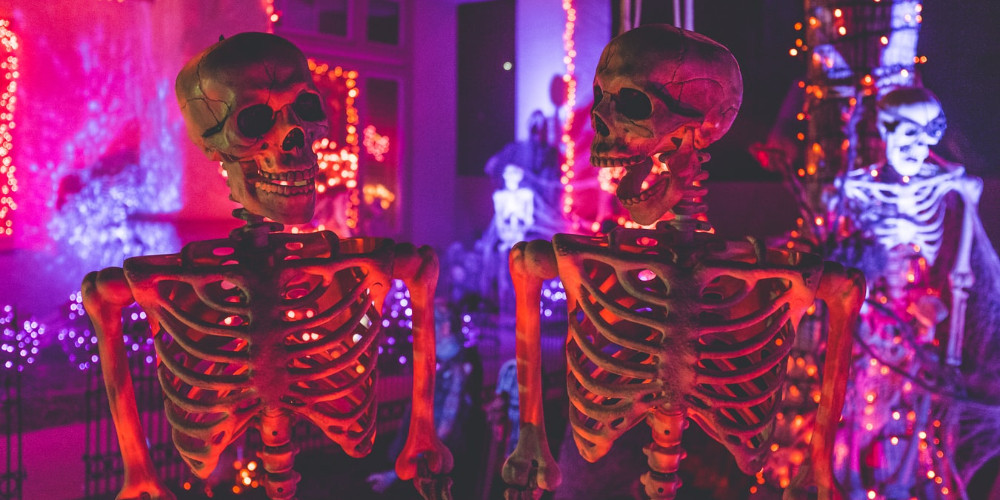 Yes, we are at that time of the year. Weirdly, most of the world seems to think that all the deceased become more active and should be honoured exactly around these months. Even the ancient non-christian traditions seem to revolve around this time, and it just proves that such concepts are quite universal really. And modern Halloween celebrations have just become a more entertaining way to talk about the topic of the dead souls.

1. Samhain in Ireland and Scotland

This is the very birthplace of Halloween celebrations around the world as we know them nowadays. Historically it is a Celtic tradition where they used to wear costumes and light bonfires to avoid encountering ghosts. Nowadays, it is rather a private than public festivity where people would hold a meal, honour the deceased, and perform various pagan rituals to honour the harvest. And be cautious when talking to connoisseurs - Samhain is technically a different event than Halloween! FYI - Ireland is also one of the places where is best Halloween celebrations in Western Europe if you are looking for that more typical experience!

Among other modern Japanese celebrations, Halloween is definitely not traditional to this region, but they have found a way to put their own twist on it. It is a quite recent tradition that started just 24 years ago but gathers thousands of costume enthusiasts from all over the world. Not necessarily a remake of the American Halloween celebrations, this is rather a homage to the creativity and costume arts. This year it is taking place online, and the theme will be Cyberspace Costumes. Maybe you also want to take part in one of the Japan celebrations Halloween style?

Among New Zealand celebrations, Halloween has never been a popular choice. That is until very recent years when some start adopting the well known trick-or-treat tradition. Many locals celebrate this with games and food in the circle of their own families instead. In New Zealand celebrations Halloween perception nowadays is rather a kid thing and practically non-existent in rural areas. But they do have a fun festivity around the same time, and locals prefer Guy Fawkes instead! Around 400 years ago, Guy Hawkes and the other 11 men tried to blow up the British Parliament and were caught in the act. And now each the 5th of November during one of the most popular New Zealand celebrations Halloween is avoided in a way. At least some locals say they choose the more traditional fireworks and family time a few days later than the rest of the world gets dressed in scary costumes!

4. The Hungry Ghost Festival throughout Asia

Even in Asia, they are no strangers to the concept of honouring the deceased. The whole seventh month of the Chinese calendar is said to be the month of ghosts, but on the 15th day, people celebrate the well known Hungry Ghost Festival. In our timeline, it would usually land somewhere between mid-August and mid-September. It is a way to feed the roaming spirits with food and money they might need for the afterlife. That is, people leave offerings outside their home, and it is considered rude to take or misplace them. The celebration is so significant that in 2011 they even listed it as a part of China’s intangible cultural heritage!

Yet another festivity that looks nothing like Halloween celebrations we see in the movies, but no less meaningful though. In many pagan traditions, these several weeks in October were considered “velu laiks” or the “time for the deceased”. Traditionally people used to celebrate it by becoming more subtle in their daily routines and treating the bygones with a meal. The final meal was held on the 28th of October, and then the deceased were ceremonially sent back to the other side. That is until the next year!

It is a 16 day period when Hindus pay homage to the deceased, especially through food offerings. There are particular rituals and traditions on how the food should be offered. For example, cooked and served preferably in silver pots and given with both hands. Non-vegetarian meals should be avoided etc. The nicest part about this time is the fact that Hindus are supposed to give offerings not only to the ancestors but also to the ones in need. Therefore Indian dishes, food, clothes, and grains are donated to the poor too. An important part of the tradition is to feed animals - dogs, crows, and cows in particular!

The Igbo people of Nigeria believe that every two years the deceased return to visit their families and friends. The holiday is celebrated for up to six months! And the highlight is the reenactment of the spirits visiting their relatives and their agony when leaving. Men prepare a theatrical performance while women make sure there is enough food for everyone. It usually takes place in April and is definitely a great way to see more of the local Nigerian culture!

Each year from September to mid-October, Buddhist families celebrate this religious holiday Pchum Ben to commemorate the dead. Food offerings and baskets of flowers are being brought to the temples. Meanwhile, it is the time when people celebrate their elderly and honour this connection too.

In my opinion, Dia De Los Muertos is one of the best Halloween celebrations and is nowadays more and more recognized in the whole world due to the big Mexican population in the USA. It is celebrated from the 31st of October until the 2nd of November. The latter one is the big party day - streets are full of parades, people paint their faces in a particular Calavera (skeleton) way, and honour the deceased. Usually, it is done by visiting the cemeteries to decorate them with marigold flowers and sugar skulls. It is a custom for the gravestones to be cleaned during this visit!

10. Day Of Dracula in Romania

Halloween is definitely associated with a multitude of “scary” elements. Therefore no wonder that Vlad “The Impaler” Tepes’s supposed home in Bran Castle in Transylvania, Romania becomes especially popular around the time when is Halloween celebrated. Nevertheless, the actual celebration of this Vlad guy or the real-life inspiration for Graf Dracula novel takes place on the 26th of May. It is when the book by Bram Stocker first came out in 1897. Either way - if you celebrate with the rest of the world or to commemorate the legendary book. You might be able to pull off one of the best Halloween celebrations if you go to Romania!

Around the time when is Halloween, almost all Christian world celebrates All Saints’ Day. In some countries, they celebrate it from the 31st of October until the 2nd of November, but the actual day is on the 1st of November. It is still a debate if this religious celebration took over the tradition to commemorate the dead or this was incorporated in older traditions throughout time. Nevertheless, it is a day in which most people would just bring flowers to the graves of their deceased relatives and remember their lost loved ones.

Where is best Halloween celebrations in Western Europe?

If none of the options mentioned above answered your questions about the party you have been craving for, let me help with a little more information. You already saw some ideas for non-American Halloween celebrations, but how about something more Halloween-y? Besides the very birthplace of the tradition in Ireland, you should definitely also consider Burg Frankenstein, Copenhagen, or Amsterdam. In the latter one, the Halloween celebrations last for five whole days!

This year Halloween might be less traditional than the other years due to a row of restrictions. Nevertheless, I am sure you will be able to figure out the way to spark that special feeling even if you are at home! Why not take one of the Halloween celebrations around the world I mentioned above and recreate it from the comfort of your own home? Or even better - combine several of those into one and uniquely make up one of the best Halloween celebrations exactly this year! Maybe a party in the best traditions of Japan celebrations Halloween parade or something totally different? Who knows, maybe in a few years there will be a new tradition named by you?