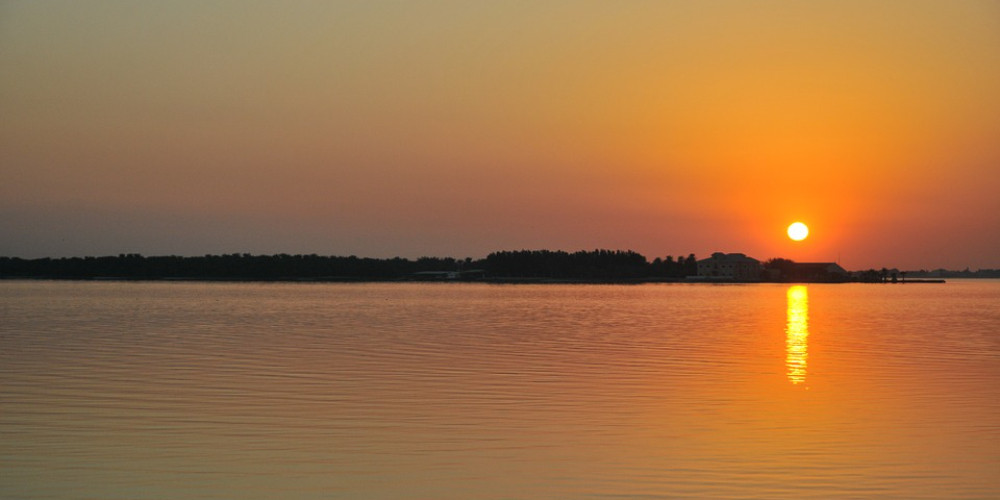 Nowadays, the number of users of the social platform Instagram is in excess of a billion. And each of them tries to stand out either with its high-quality content or fascinating most liked Instagram photos. For the second case, the best way to enrich your feed is, of course, travel, because a photoshoot against the background of unusual places will easily stand out in the subscribers' feed. The most important question, in this case, is the choice of where to go and whether there are places suitable for the next post. The Kingdom of Bahrain is just the right place to help your profile transform to the fullest. Today we will discuss 12 Instagrammable places that tours to Manama Bahrain can reveal for you, and at the same time, learn more about this island paradise. Let's go!

Where is Bahrain on the map?

Bahrain on the world map

, is located in the Persian Gulf, it is formed by many islands of different sizes, but three of them are larger, which makes them the main ones. The Kingdom is considered the smallest Arab state in the world, with an area of 765 kilometers squared and a population of one and a half million. But this does not prevent Bahrain from striking guests with its Instagrammable places; let's move on to them.

1. The Ancient City of Muharraq

Our list will open a place for fans to fill their Instagram with vintage objects and pose against their background. The city of Muharraq was the capital of Bahrain in the 19th century and still retains the charm of an ancient Arab city with its low houses, narrow streets, and Instagrammable historical buildings with their traditional architecture in the style of the Persian Gulf countries. Muharraq was once a very small town, which gained importance only after the royal family settled here in 1810. At that time, Bahrain was a major pearl mining center and a port stop on the international trade route between the Far East, India, and Europe. This has had a profound impact on the culture and heritage of the country as a whole because Bahrain, whose attractions are mainly related to the history of Bahrain religion, became known precisely because of the trade routes.

Sheikh Salman bin Ahmed Fort, widely known as Riffa Fort due to its location in Riffa, is a historical landmark and witness to one of the most important moments in the history of Bahrain. In its Instagrammable architecture lives the memory of the ruling family of Bahrain Al-Khalifa. The restoration works organized by the Ministry of Culture brought the fort back to life and not only presented the chronological history of the royal family but also demonstrated the interior of the fort, designed by foreign firms that drew inspiration from the history and people of the fort. These days, tours to Bahrain encourage you to visit the fort for excursions at almost any time of the year, here you will enjoy the beautiful views of the Al Haniniya Valley and the perfect atmosphere created by the history and environment. But before making your travel plans please check Bahrain visa requirements for your nationality.

3. The Circuit Of Bahrain

What can cheer you up better than speed and a pleasant excitement for your favorite driver of the car, as well as a bunch of bright and energetic photos of what is happening on the track? All this you can enjoy at the Bahrain International Circuit. Formula 1 Bahrain is the first time this type of race has been held in the entire Middle East. The circuit is built on a former camel farm but boasts a first-class license from the FIA. The huge tower is an excellent viewing platform for all the tracks and the desert beyond, which is famous for the Grand Prix of Formula 1 Bahrain. The combination of long and slow turns on the 5.4-kilometer laps gives viewers a good opportunity to watch the riders in different positions and at different speeds. Formula 1 Bahrain is a great chance to take a tour of the venue to look behind the scenes of its work and fully immerse yourself in the atmosphere of this place.

The World Trade Center is located near the King Faisal Highway in Manama, the capital of Bahrain, and consists of two 50-story sail-shaped commercial office towers that taper to a height of 240 meters and are supported by horizontal wind turbines with a diameter of 29 meters. The mall offers unobstructed views of the Persian Gulf that would look great on your Instagram. The towers are combined atop a three-story podium that houses gourmet restaurants, a food court, a health club, and a SPA. Designed by architect Atkins, the Bahrain Mall has won several awards for its use of renewable energy in a large-scale building project, including the NOVA Award for integrating technology to reduce development costs.

5. The Heart Of Amwaj Island

Much attention in the country has been paid to the tourism sector since the 21st century. Bahrain's beaches are always filled with tourists in peak season. However, Amwaj Island has become one of the first and most successful businesses to develop this sector. The islands are located 10 kilometers northeast of the main island of the Kingdom of Bahrain on the world map and cover about 4.3 kilometers squared. Amwaj Island has long established itself as one of the most expensive and prestigious areas of Bahrain to live in. Artificial islands provide a wide range of housing options, from one-bedroom apartments to spacious villas. For the best shots for your Instagram, you will be helped by the spectacular views and nature of Amwaj Island, along with its spectacular sights. Be sure to visit Laguna Park, which is located in the heart of the island, and the Bird Kingdom "Azizia," where more than 70 species of rare and birds live.

As a result of modernizations and designs, the Kingdom of Bahrain established the Al-Arin Wildlife Park and Reserve Project in 1976, which aims to preserve what remains of the endangered wildlife of Arabia. Bahrain tourist attractions of the natural world, which is considered a leader in recognizing threats to wildlife, as they have created a park and wildlife sanctuary to protect rare animals and work on their reproduction. The reserve was primarily designed to provide a refuge for endangered species. And for this purpose, the territory was divided into two main parts: a park and a nature reserve. The park covers three square kilometers, and visitors can ride tourist buses to explore the environment. The reserve, which covers another four square kilometers, is dedicated to the conservation and breeding of rare Arab animals. Access to the reserve is restricted, except for specialists, researchers, and veterinarians.

It is not news that religion has played a major role in the development of the cultural aspects of the country. And Bahrain tourist attractions, which were built thanks to Islam, are appreciated at the highest level. The Al-Fatiha Mosque is built as a majestic structure in honor of the founder of modern Bahrain, Sheikh Ahmed bin Muhammad, known as "Al-Fatih." Marble was brought from Italy to decorate the floor, windows were inserted with glass from Austria, and carved majestic doors 6 meters high were delivered from India. The area of Al-Fatiha is 6,500 square meters, and it can accommodate up to 7,000 parishioners. A huge dome built entirely of fiberglass. With a weight of over 60 tons, the dome is currently the world's largest fiberglass dome. Every day here, you can find English-speaking guides who conduct free excursions. The most liked Instagram photos of the facade of the mosque will look good on your pictures.

Another mosque is named after the area where it was built. It is one of the oldest historical Islamic mosques in Bahrain. The mosque was built, taking into account all Islamic principles. It consists of two minarets standing at the corners of the front side and is lined with limestone slabs, and the material used in the construction is wood and stone. The Al-Khamis Mosque was once of paramount importance as a place for religious rites and ceremonies, it was equipped with a school for teaching religion and housing for students. Due to its historical location, the mosque has been restored several times to preserve it as a significant Bahrain tourist attraction, which the Kingdom of Bahrain is so proud of.

A couple of kilometers from the top of Jebel Duhan, on a sandy hill with a height of 7.5 meters, there is a lonely Tree of Life. This majestic 400-year-old knotty mesquite tree, 10 meters high, is considered a local miracle, and some even believe that it is from the Garden of Eden. Its remoteness and proud solitude create an unusual atmosphere in this area. Incredibly, the tree has survived for centuries, and its round-shaped lush green foliage proves that it still survives in the southern desert of Bahrain, even though there is no obvious water source here. Thousands of visitors mark Bahrain on the world map for a trip to take the most liked Instagram photos in the shadow of aging limbs that have spread far apart. And you can join them by taking quite a few photos for your feed.

10. The Market of Bab al Bahrain

The Kingdom of Bahrain has always been at the center of major trade routes, and although the capital of Bahrain is full of skyscrapers and an impressive World Trade Center, modern Manama Bahrain can still delight you with the atmosphere of traditional markets and bazaars. Bab al Bahrain is one of the most Instagrammable markets in Manama. Enter through the arched gate to find shops and stalls selling colorful handmade fabrics, hookah pipes, unique spices, fruits, and vegetables, as well as gold and amazing pearls. And in the back streets of the Central Business District of Manama, Bahrain will immediately introduce you to the old Manama Souk Bazaar, which is a maze of narrow streets and alleys. It's also known for its pearls and gold, but you can also find everything from electronic goods to spices and, of course, great Instagrammable places to take photos.

The museum is the crowning achievement of the ongoing efforts to promote the Kingdom of Bahrain on the world map and preserve the national heritage and history. It was opened in 1988 by the late Emir Sheikh Isa bin Salman Al Khalifa in a solemn ceremony. Built-in the city center between Manama and Muharraq, the National Museum of Bahrain consists of 9 main halls and divides the accumulated heritage of the Kingdom of Bahrain into 6 different parts. Museum visitors will go on a 4000-year journey through time, passing through its halls, from traditional handicrafts hall to the hall of customs and traditions hall, burial mounds hall, ancient documents, Tylos hall, and Islamic period. The museum aims not only to improve the understanding and knowledge of the history of Bahrain only among local residents but also guests of the country, among whom you may find yourself if you are also interested in tours to Manama Bahrain in the near future.

In the Kingdom of Bahrain, beaches are not limited to a small number. One of the most beautiful, clean, and beautiful of them is Marassi Beach. It is located in the northeastern part of Bahrain, in Diyar al-Muharraq. This is exactly the place to go for the right views for the picture is really worth it, at the same time and spend a good summer vacation. Here you will find sun loungers, bag chairs, trampolines, and even cruise liners. Water sports and inflatable boats are also available. Great location, well-equipped cafes, and good eateries in modified shipping containers that look really good. For a great family vacation, you definitely need to come here, because even if you do not count Marassi, the Kingdom of Bahrain has really Instagrammable beaches.

Topics
Apply for any visa in two clicks!
Countries
Do you want to get a Bahrain visa easily?
Get your visa now 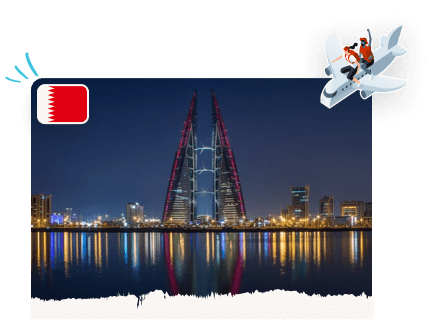