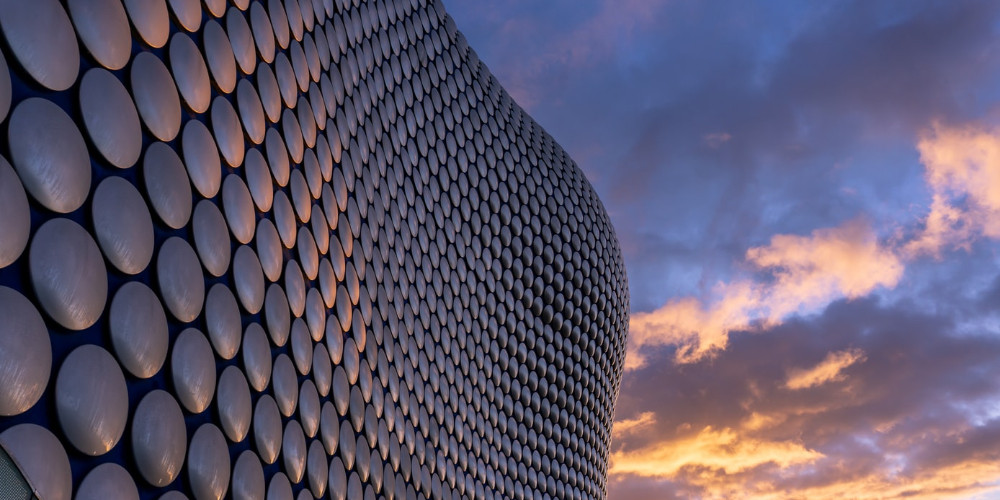 A big and beautiful city with business ambience, with familiar shots of people hurrying somewhere, posh business buildings and iconic landmarks, a hub for the hard-working class, yet a centre of culture, history and architecture. You open the artistic panorama of the city for yourself as you walk. Our next stop is Birmingham. If you plan to explore a fabulous city full of fun, art and music, to return full of memories, and showcase shots from your visit, welcome to the city tour of Birmingham. This is a city where the memory of centuries mingles with modern culture and gives the place its fascinating look and atmosphere. Situated halfway between London and Liverpool, Birmingham is the UK's second-largest metropolis. Locals call it Brum. It's a wonderful city to visit; one of the most culturally diverse cities, home to many different nations all living happily together. Over 41 million people travel to Birmingham every year. Let's discover 12 Instagrammable places of Birmingham that you'd love to add to your must-visit list for a trip to Birmingham.

Innovation and imagination define Birmingham. Bullring is a high-end commercial area with a wealth of shopping centres, both outdoor and indoor shops in Saint Martins Square. Shopping here is considered the best in the country, outside of London. This place has been the centre of trade since the Middle Ages. The city itself began its history as a small market village at the crossroads of the UK's trade routes. There is "Birmingham Bull" outside, the city's iconic symbol. British Newspaper "Independent" included this Bull sculpture into its "The Top Ten: Public art" list. You'll see people stopping by to snap photos with the Bull. As you stand in front of the "Next" shop, there is a great view of the Cathedral; check it out. It's nearly impossible to pass by and not to take an Instagram worthy photo there. Every year, in early November, Frankfurt Christmas Market takes place in the heart of Birmingham City Centre, close to Bullring and New Street Station. The festive brings a fabulous atmosphere to the city. Admiral Nelson Statue in the city centre. This bronze monument of Lord Nelson in a naval uniform was made first, before the memorial to the national hero in London. "England expects that every man will do his duty" is written in the description. The monument stands in the Bull Ring.

If you plan your trip to Birmingham after London, it is an hour and 25 minutes away on the train. After you arrive, you might want to take a rest; a garden is a perfect option to enjoy plentiful green spaces and contemplate what to do in Birmingham and where to go in Birmingham. We would recommend visiting Soho House Gardens for this purpose. Soho gardens and cafe is one of the many free sights that you can visit during your trip to Birmingham. A notable and rich industrialist, Matthew Boulton, designed his elegant "landscape garden" in the late 18th-century. It's no wonder one of the most Instagrammable places. Speaking of gardens, if you have kids and want them to return having learned and experienced new knowledge, take them to explore engineering, mechanics and transportation. This outdoor discovery area is called Thinktank Science Garden and offers fun activities for the whole family. In fact, Birmingham is one of the UK's greenest cities and has a lot of parks, even more than in Paris. On your way, you can walk to Sutton Park, as well.

"We have transformed the canals. And the canals transformed Birmingham", written on the board welcoming people to the heart of Britain's canal network. Everyone calls Birmingham Little Venice. You can go there for a stroll, to enjoy a nice meal with many options to eat, go on a lovely canal cruise in a narrowboat. They are even called in this way - "Narrowboat". It has a reason behind it; the passage in the water allows boats of this size only. Enjoy a 1-hour trip through the heart of Birmingham while getting the best angle for your Instagram stories.

Jewellery Quarter is one of the best Instagrammable places in Birmingham. Birmingham is very famous for jewellery. 40% of the entire jewellery in the UK are made in perfectly preserved traditional Birmingham workshops. You'll find more than 100 jewellers, a lot of shops, a museum and true inspiration for your Instagram photographs in the Jewellery Quarter.

5. Back to Back Houses

Expect rainy weather in Birmingham. The city looks amazing with the fog. But some places look unique in any weather. Back to Back Houses, for example. A hundred years ago, people lived in little homes. These are tiny, at the same time, beautiful British-style houses. Do you remember Bull Ring? This place is 7 minutes walk from the Bull Ring area. There are, in fact, 11 Back to Backs, do not forget to check in - one of the best places for street photography.

The sixth Instagrammable places in Birmingham is Victoria Square. Victoria Square is home to the Town Hall and the Council House. Council House is one of the largest buildings in the heart of the city. Birmingham Town Hall is a famous concert hall. Beatles, Pink Floyd, Queen, Rolling Stones and other well-known groups performed in the Town Hall. During the Victorian Period, various town halls were built in different cities. The Birmingham Town Hall is the first such building. It reminds Roman Architecture. The best time to visit for outdoor shots is morning, as morning sunlight illuminates the whole scene. What to do in Birmingham if you are a music lover who has a UK visa and travelling in Birmingham? Birmingham has invested in arts and culture for decades. Birmingham is a musical hub; some internationally recognized bands and musicians such as Duran Duran, The Moody Blues, Led Zeppelin, Ocean Colour Scene, Ruby Turner, Musical Youth and others were born and brought up in Birmingham. Over 50 festivals each year are held in the city. So, if you happen to travel to Birmingham during the festival season, join the Moseley Folk Festival, Fierce art festival and the massive Birmingham International Jazz Festival.

Birmingham continues its tradition of beautiful architecture treasure into the modern world. To the question "where to go in Birmingham", we would say: Visit the Library of Birmingham, and you'll be impressed by the number of books there. Heaven for bibliophiles, in other words. Birmingham is home to superlatives indeed. This is the biggest library in the UK and the largest public library in Europe. And very Instagrammable. You can also enjoy a splendid and calming city view from a roof garden at the summit, one of the highest points of the city.

The Grand Hotel is one of the most beautiful structures in the city, which is much more admirable from a distance and will be a lovely background for your Insta photos.

9. A Building from a Winter Fairytale

Another building that can serve as a background to take the nicest pics is Selly Manor. It is within walking distance from Cadbury World, which we'll mention later on. One of the oldest structures in Birmingham, Tudor heritage, in fact, Selly Manor dates back to the 14th century when one famous chocolatier prevented the destruction of an old house to complement the other buildings in the garden village of Bournville, near the Cadbury chocolate factory. Selly Manor is now a wedding venue and a famous visitor attraction, thus do not miss this museum when you travel to Birmingham.

Cadbury is home to one of the world's favourite confection brands. It is 4 miles from the city centre. You'll discover the history and the magic of Cadbury confectionery. Devote three hours to the picturesque Cadbury World Museum when you travel to Birmingham and enjoy a fascinating day out and your favourite chocolate delights. To continue with food, for our readers who are fond of curry, we suggest visiting a neighbourhood with a bunch of fantastic Balti restaurants. Balti is a dish inspired by Indian and Pakistani cuisine. Guess which city is the homeland of Balti? Right, the dish actually was invented in Birmingham in the '70s. No more, no less, in 50 restaurants, you can try this food on your upcoming trip to Birmingham. One type of Balti we can recommend for you: A mix of chicken with cashew nuts and cream. "This was the best dish I've tried in a long time", people leave reviews like this. How you like curry sauce - medium or mild - you decide! Indeed, Birmingham being a part of Delice - a global network of the greatest food cities, is not a coincidence. So, you already know what to do in Birmingham next when you already visited most of the travel icons of the city. Important notice if you're looking for Michelin starred restaurants - there are five in Birmingham!

It is no wonder that Birmingham is one of the youngest cities in Europe, the largest of the population being under 25 years old. Broad Street is called "Birmingham's party street", a dynamic entertainment destination and popular nightspot, as many different bars, restaurants, pubs are on this street. There is a cosy place for movie-lovers in this thriving city - Cineworld Cinema Broad Street and it shows all the latest releases.

One of the most Instagrammable places in Birmingham is The Mailbox. The Mailbox was a post sorting office opened in the '70s. Now it is Birmingham's shopping and lifestyle destination in the city centre. BBC Birmingham begins its morning broadcast from The Mailbox. You can get the best shot in the dark, and the street looks stunningly beautiful with night lights.