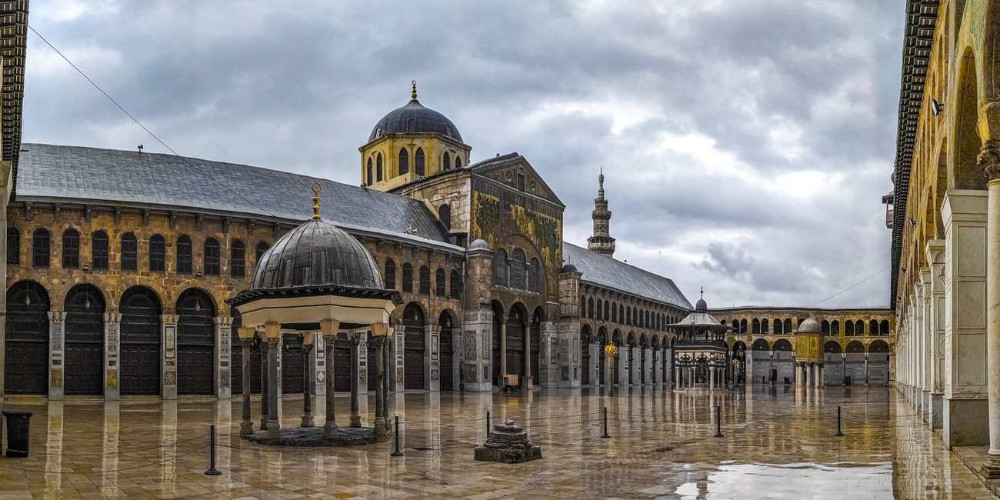 Damascus, an eternal Syrian city full of life and vibration, at one with its past and present, and the capital of Syria. Damascus was founded between 10,000 and 8,000 BC and is considered the oldest continuously inhabited city in the world. Throughout history, ancient Damascus has been home to various empires, and the Shalepakhts, who have all put their stamp on the city. While most of the Instagrammable places of Damascus are located in the old part of the city, which is also known as Bab Touma (one of the seven old gates in this part of Damascus).

Damascus on the map

Damascus's old part is a maze of historic streets full of relics from when Damascus was controlled by Hellenistic, Roman, Byzantine, and Islamic territory. Old Damascus is immersed in four different neighborhoods, the Christian Quarter, the Muslim Quarter, the Shia quarter, and the Jewish quarter, all living in harmony with each other. There are Christian churches next to Muslim mosques, close to restaurants bars. Damascus has always been one of the most liberal and Instagrammable cities in Syria and the entire Middle East, and remains very liberal.

In southwestern Syria, Damascus is the center of a large metropolis with Syria population of 2.7 million (2004). Located in the eastern foothills of the Anti-Lebanon Range, 80 kilometers (50 miles) inland from the eastern Mediterranean coast on a plateau 680 meters (2,230 feet) above sea level, Damascus experiences a dry climate due to the rain shadow effect. The Barada River flows through Damascus. Damascus is one of the oldest continuously inhabited cities in Syria. First settled in the second millennium BC, it was chosen as the Umayyad Caliphate's capital from 661 to 750.

Umayyad Mosque is one of the best Instagrammable places to visit in Damascus Syria. Umayyad Mosque: Also called the Great Mosque of Damascus, the Umayyad Mosque is one of the oldest and largest mosques in the world, it is also the fourth holy place in Islam. Built between 705 and 715 AD, the mosque stands on the site of the first-century Hellenic temple of Jupiter, which later became the Church of St. John the Baptist. The mosque's architecture hints at its rich historical past and is still the most Instagrammable place in the capital of Syria.

Souk Al-Hamidiya is the largest and most central Instagrammable bazaar in Syria, located inside Damascus's old walled city next to the Citadel. It is about 600 meters long and 15 meters wide, and a 10-meter metal arch covers it. And the ancient Roman temple of Jupiter stands at a height of 40 feet in the entrance to it. Souk Al Hamidiye is the world's coolest and oldest market, encompassing a huge number of countless shops selling everything you've ever wanted. Being here gives you a sense of going back in time. Ancient shops under one roof selling clothes, perfumes, spices, textiles, tablecloths and more are an absolute treat for all the senses and don't forget the Damascus steel knives and swords. The strong smell of cloves and cinnamon, soft, beautiful silk fabrics, colorful clothes and the charming smell of perfume will take you to another world. Many Damascus restaurants are serving delicious local delicacies. You'll be surprised by the noisy splash of life here.

3. The house of St. Ananias

St. Ananias: ancient Greek: "gracious Lord," was a disciple of Jesus at Damascus mentioned in the acts of the Apostles in the Bible, which describes how Jesus sent him to restore the "Saul of Tarsus", known later as Paul the Apostle, and give him additional instruction in the way of the Lord. Saint Ananias was from Damascus, where he was given a divine revelation about the baptism of the Apostle Paul (Acts 9: 10-17). He completed a course of martyrdom when he was stoned to death during Lucian's reign. One of the oldest chapels in the world, the Chapel of St. Ananias, dates back to the early Christian period. Presumably, it was the house of St. Ananias, which, the church next to the chapel, was found in 1921 during archaeological excavations.

Azem Palace is one of the best Instagrammable places in Damascus that dates back to the 18th century. Located north of Al-Bouzouria in ancient Damascus, the palace was built in 1749 and served as the private residence of Asad Pasha al-Azma, the governor of Damascus. During the French mandate for Syria and Lebanon, it housed the French Institute. After the Syrian government bought it from the Al-Azm family and several restoration works were carried out, the palace now houses a Museum of Arts and Folk Traditions. Al-Azem Palace is a true example of the most extravagant lifestyle and culture of Damascus. The palace is divided into two sections: Haramlik and Salamlik. Haramlik is a family wing that is a private space that includes kitchens and baths. Salamlik, reserved for outside guests, has formal halls, beautiful reception rooms and courtyards for entertaining. Admire the traditional Damask black pattern of alternating bands of black and white stone on the outside. Explore the intricate wood paneling on the walls and ceilings inside. Spend some time in the central courtyards with fountains and relax under the trees and overhanging vines.

The National Museum of Damascus is a museum in the heart of Damascus. As the country's National Museum, as well as its largest museum in Syria, this museum covers the entire spectrum of Syrian history for more than 11 millennia. It features various important artefacts, relics and major finds, primarily from Mari, Ebla and Ugarit, the three most important ancient archaeological sites of the cities in Syria. The museum was founded in 1919 during King Faisal's reign in the Arab Kingdom of Syria and is the oldest cultural heritage institution in Syria. Among the museum's main attractions is the Dura Europos Synagogue, a reconstructed synagogue of 245 AD, which was moved to Damascus by the piece in the 1930s and is known for its bright and well-preserved wall paintings and frescoes, as well as sculptures and textiles from central Palmyra.

Caravanserai Asad Pasha The next one of the best places to visit in Damascus Syria. As'ad Pasha Caravanserai is the largest caravanserai in Old Damascus, covering an area of 2,500 square meters. Located along the Al-Bouzouria Souk, it was built and named after Asad Pasha al-Azma, the governor of Damascus, in 1751-52. Khan Asad Pasha has been described as one of Damascus's best khans, and the caravanserai as the most "ambitious" piece of architecture in the city. During the Ottoman era, it hosted caravans arriving from Baghdad, Mosul, Aleppo, Beirut, and other Middle East parts.

Bab Sharqi, also known as the Gate of the Sun, is one of Damascus's seven ancient and Instagrammable city gates. Its modern name comes from its location in the eastern part of Damascus on the map. The gate also gives its name to the surrounding Christian quarter. The large facade of the gate was reconstructed in the 1960s. In addition to being the only surviving original Roman gate, Bab Sharqi is also the only one of the eight gates of the Ancient City of Damascus to retain its original form as a triple passageway, with a large central passageway for caravans and wheeled traffic, and two smaller ones flanking a large passageway for pedestrians.

It is no secret that Mount Qasioun is one of the most Instagrammable places and attractions in Damascus. It is a mountain with a height of 1151 meters with a view of Damascus, from which you can see the entire city. Many restaurants on Mount Qasioun offer excellent cuisine and fantastic views of the Instagrammable city from the top. Climbing the mountain requires a bit of walking, but the experience is worth the work. The mountain is home to endemic iris species that can be found on the steep eastern slopes. Visiting the mountain at night is a very different experience. The city lights are breathtaking and look like a million stars twinkling in the galaxy.

Take a walk through theTakiyya Suleimaniah Souq and experience the true flavor of the city. This is one of Damascus's hidden gems and one of the best shopping areas you should visit. Discover a colorful display of handmade products, wooden and ceramic boxes, glass and silver tableware, as well as a variety of other products for sale. The shopkeepers are very friendly. You can even bargain and lower prices. Visit Takiyya Suleimaniah Souq for a wonderful shopping experience. There are also many Damascus restaurants that you can eat after a hectic day of sightseeing around the city. The beautiful Taqiya al-Sulaymaniyah, located on the Barada River banks, was built between 1554 and 1560. The complex has a large mosque, a kitchen across the courtyard, a madrasah and an adjacent bazaar. It has great historical value and is considered one of the best examples of Ottoman architecture. The courtyards are beautifully landscaped with trees and have a central swimming pool. Don't miss the wide portico and massive prayer hall. After a tour of the mosque.

10. The citadel of Damascus

Located on the northwest corner of Syria's old walled city of Damascus, the citadel has always been an important tourist attraction. Although it has been damaged several times due to war and other historical events, the Citadel has been repaired and restored and prides itself on being one of the main attractions in Damascus. Unlike other medieval Arab castles built on the tops of large hills, the Citadel was built on flat ground on the same level as Damascus, capital of Syria. Located on the Barada River banks, the Instagrammable building houses 12 towers connected by curtain walls with vaulted galleries. The citadel has three gates located on the north, east and west sides.

Salah al-Din's tomb (Salah al-Din) is located near the northwest corner of the Great Umayyad Mosque. Although Saladin died in 589 AH / 1193 AD, he was initially buried in the Damascus citadel until his son al-Malik al-Afdal Nur ad-Din ' Ali, the ruler of Damascus, completed the construction of the mausoleum. Saladin's body was moved to his last resting place on the holy day of Ashura in 592 AH (1195 AD). Shortly after, another son of Salahaddin, the ruler of Egypt, al-Malik al-Aziz 'Uthman ('Uthman II), decided to build a madrasa attached to his father's tomb. Thus, it is also known as al-Madrasa al-Aziziya.

Straight Street (or in Latin Via Recta) is a Roman street running from east to west in Damascus's old city. It was visited by St. Paul, as recorded in the Book of Acts of the Apostles, and contains several interesting sights of the Roman, Christian, and Islamic periods. Under the Greeks, Damascus's old city was designed on a grid pattern designed by the Hippodamus. During the Roman rule, the Via Recta was expanded and turned into a ring highway (cardo). These columns can still be seen today. Entering the city from the east through Bab Sharqi, you can still see the remains of the double colonnade used to line the entire length of the street. During the Roman Empire, the Straight Street was 26 meters wide and 1570 meters long, lined on both sides with covered porticos containing shops.

Topics
Apply for any visa in two clicks!
Cities
Do you want to get a Syria visa easily?
Get your visa now 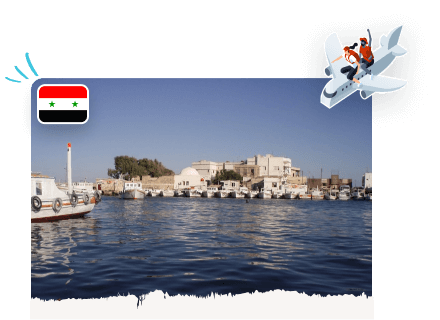