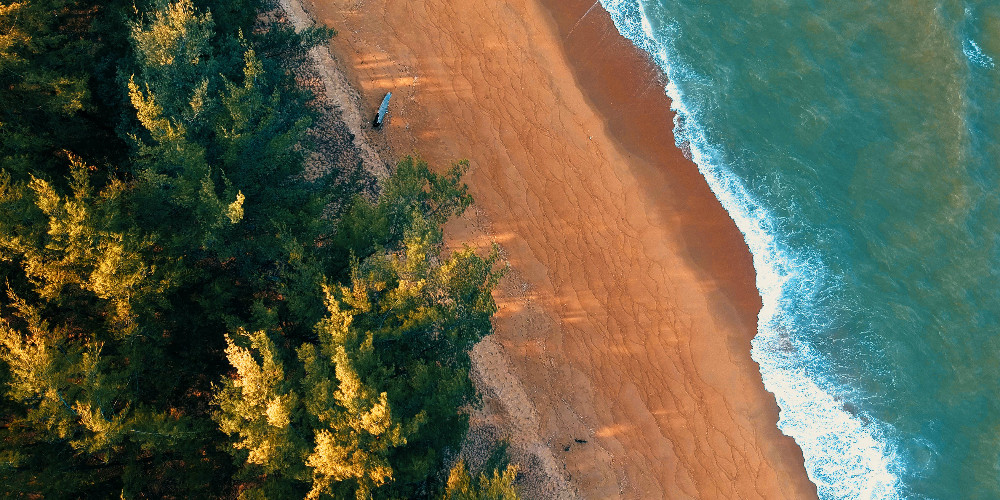 Where is French Guiana?

Finding French Guiana on the map is not so hard. In the top corner of South America's map, there is a small country with an area of about 84 thousand km2. It may be inferior to other neighbors like Venezuela or Brazil, but there are many Instagrammable places where you can have a great time and take some amazing photos for your Instagram. French Guiana is the center of a mix of African, Brazilian and French cultures, and if you visit during the carnival, you can join in the celebrations and mass festivities. This country also actively promotes ecotourism. In a large part of the untouched equatorial forests, home to a wide variety of wildlife, you can get away from the hustle and bustle of a European or Asian metropolis. Along the coast, nature lovers can explore the bird-rich swamps and visit the magnificent French Guiana beaches of the Atlantic Ocean and watch the giant turtles that come ashore to lay their eggs. Inland, vast savannah stretches to lushly covered mountains, and rivers flow through dense jungles. This article will tell you about 12 Instagrammable places in French Guiana where you can take most liked Instagram photos.

The equator is the best place to launch a rocket. It is because the location of French Guiana is ideal for launching rockets into space. In 1964, the French government selected a small location near Kourou's city for the construction of a space center. This decision was not accidental: there are almost no people around, and storms are very rare. French Guiana is very proud of this object, so they actively advertise excursions to the space center. Here you can watch a film about the center's history, get acquainted with the rocket control center, look at pictures of planets, and watch the rocket launch from the jungle or the beach. The fact is that about 9 rockets are launched into space from French Guiana a year, and if you plan your vacation, you can easily take a selfie against the background of a flying rocket. If you did not get to the rocket's launch date, then in a kind of museum, you can feel like a real astronaut, change into unique clothes, and take a beautiful picture for social networks. This museum will be interesting both for science lovers and for those who came here for unrestrained fun!

As in the previous articles about small countries, we are also obliged to mention the French Guiana Zoo in this text. After all, equatorial or tropical countries are less populated and have never been a center of peoples' immigration. Therefore, countries such as French Guiana could preserve flora and fauna in a more natural form. In the national zoo, which is located in the capital of French Guiana, Cayenne - visitors will see the jaguars, crocodiles, monkeys, and anteaters familiar with this geography and those animals and birds that live exclusively in French Guiana. The zoo has 450 animals of different species, and all of them live and delight the eyes of tourists and locals. By the way, the zoo is popular with locals who come here to relax at the end of the week. On the territory of the zoo, there are hiking trails, as well as tourist attractions for children.

The pirogue is a small traditional boat from the Caribbean coast. Due to the abundance of rivers, indigenous French Guiana people have used pirogues for travel and trade for centuries. With the advent of technology, the need for pirogue has decreased, but this type of canoe has become a calling card for attracting tourists. You can see remote villages, untouched nature in all its natural beauty during the Pirogue trip, meet wild monkeys, caimans, and other animals. Also, traveling on a Pirogue along the most famous route for tourists, you will be offered to get acquainted with the tribes of the Indians, visit the village, try the local cuisine. It is where you can learn about the life of the Maroni Indians and take most liked Instagram photos, which will last for several years! You can also choose a route along the river Oyapock and visit the village where gold was mined for centuries. Perhaps there you will be the first to discover the lost city of El Dorado and go down in history? Even if not, you will have an unforgettable experience of visiting these Instagrammable places, which you will never forget!

Victor Schoelcher is one of the most revered French Guiana people and all France's overseas possessions. The fact is that he, who in the 19th century was an ardent opponent of slavery, which he achieved in 1848. Thanks to him, the French Guiana population life improved on all the islands of the Caribbean Sea, which worked for the prosperity and enrichment of the European powers. The central square of Cayenne is now named after him. All the main events in the city take place, and right on the square is the central market of the capital of French Guiana, where local merchants sell spices, fruits, ready-made food, souvenirs, and handmade products. Tourists will taste local and Asian cuisine, which is so famous in French Guinea because of immigrants from China and Southeast Asia.

Place de Grenoble is the busiest place not only in the capital of French Guiana – Cayenne but also in the whole of French Guiana. The fact is that here are all the important buildings of the city, from the city hall to the post office, built in the 18th century. The whole life of the capital of French Guiana seems to take place on this street, but we would like to tell you not about the street itself, but the historical museum located here. The Departmental-Fransoni Museum, which is essentially a historical museum, has a huge collection of exhibits from colonial and pre-colonial times, when local Indian tribes inhabited the territory. The museum also has rooms with stuffed wild animals, some of which are now extinct.

We have already told you that a few centuries ago, workers from China, Laos, and Siam emigrated to French Guiana for a better life. The fact is that after the approval of the colonies, the French wanted to engage in the cultivation of tea plantations seriously, and who, if not the Chinese, knows this business better? Unfortunately, this did not have any effect, but Asia's emigrants got too used to this overseas, Instagrammable territory and stayed here to live. Now, the descendants of Asian immigrants are called Hmong, and they make up 5 to 10 percent of the total French Guiana population. On the Comte River is the village of Cacao, a popular tourist center in the country. However, the residents of the city moved here relatively recently. After the difficult situation in Laos (another colony of France), refugees from this country were resettled here. They opened restaurants in the village, built houses, planted trees, and ... became part of Asia in South America. Tourists staying in French Guiana are advised to visit this wonderful village, enjoy Asian dishes and take many beautiful most liked Instagram photos.

Remire-Montjoly Beach is not only the closest beach to the capital but also the most Instagrammable. Tourists visit this place to relax under the sun and because here you can find many activities, ranging from canoeing to rafting and diving. Another advantage of the beach is the sea turtles that come ashore to lay eggs during the season. The beach line is quite narrow and long, so when you turn around, you will not see the desert wilds, but you will see beautiful forests, long palm trees, and all the delights of the jungle. If you get tired of relaxing on the beach, then there is a sugar factory nearby, where you can visit with a tour and for a beautiful photo on Instagram. Following the trails laid down by the locals, you will climb Mount Mahori, where you will see an incredible view.

L'Ilet la Mere Island is a small island for those who love monkeys. There are almost no people here, so the monkeys allow themselves to live and feel like the island's real owners. To visit the island, you need to drive to the marina of Cannes, near the capital of French Guiana, take a boat, and in 30 minutes, you will hear the cries of monkeys that will greet you. They will jump on your shoulders, look for something in your hair, and will not let you have a quiet time at all. However, you need to be careful, as these curious creatures can break your phone or camera. Also, on this wonderful island, you can go hiking on hiking trails, swim on the beach, and have an unforgettable picnic. Since there are no restaurants here, tourists are recommended to take food with them. However, don't forget to feed the monkeys as well.

Reserve Naturelle Regionale Tresor is a habitat for many rare species of animals and birds, of which there are few left in the world. Being the second-largest nature reserve in French Guiana, there are 98 species of animals and 535 species of birds under state protection. Also, on the reserve territory, there are rainforests, swamps, and, of course, an incredible waterfall. Tourists are offered to guide who will show you the best Instagrammable places and help you take some beautiful Instagram photos. The only difficulty is that it is located in the Cau area, about 60 kilometers from Cayenne, and you can only get there by the river.

It is the largest national park in French Guiana. It is located in the south of the country, near the border with Brazil. To get here even more difficult than in Morges, but you can easily find tours. Part of the Park is protected, and the other with live local Indian tribes as: Camopi, Maripasoula, Papaïchton. Due to its unspoilt nature, it is home to 180 species of animals and 720 species of birds. Also, there are endemic trees on the park territory, which are unlikely to be found anywhere else. In addition, mining is prohibited on the territory because gold can easily be found on the shore. Therefore, if you see something shiny in this park, we do not advise you to touch it to avoid any law problems. But after all, no one forbade taking Instagram photos?

In 1931, Frenchman Henri Charriere was convicted of a murder he did not commit. He was sentenced to life in prison on Devil's Island, which is part of the Islands of Salvation or Iles du Salut. After living, or rather surviving, he fled to neighboring Venezuela on this island for 12 years. Several books have been written, and a film has been made about his ordeal. Today, the Islands of Salvation preserve the memory of prisons only in ruins. Many buildings have been converted into museums and hotels. It is also home to beautiful macaws, monkeys, and other animals. Moreover, tourists can buy souvenirs dedicated to the history of the island.

Fort Ceperou ruins a once large defensive complex built in the 17th century in the capital of French Guiana, Cayenne. Ceperou was the leader of an Indian tribe and tried to protect his tribe from foreign invaders' onslaught. Unfortunately, today there is almost nothing left of the fort. However, due to its location on a high hill, it offers an incredible view of the city! In the end, we will say that to visit French Guiana. You need to contact the French Embassy. If you are not a European Union resident, you can only visit this country if you have a Schengen visa. Enjoy your trip!

Topics
Apply for any visa in two clicks!
Countries
Do you want to get a French Guiana visa easily?
Get your visa now 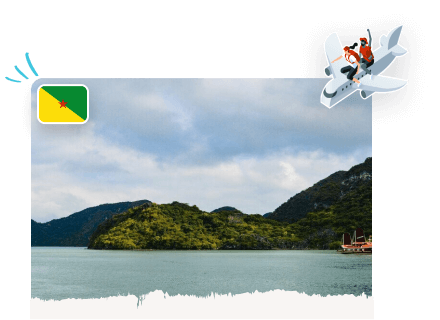