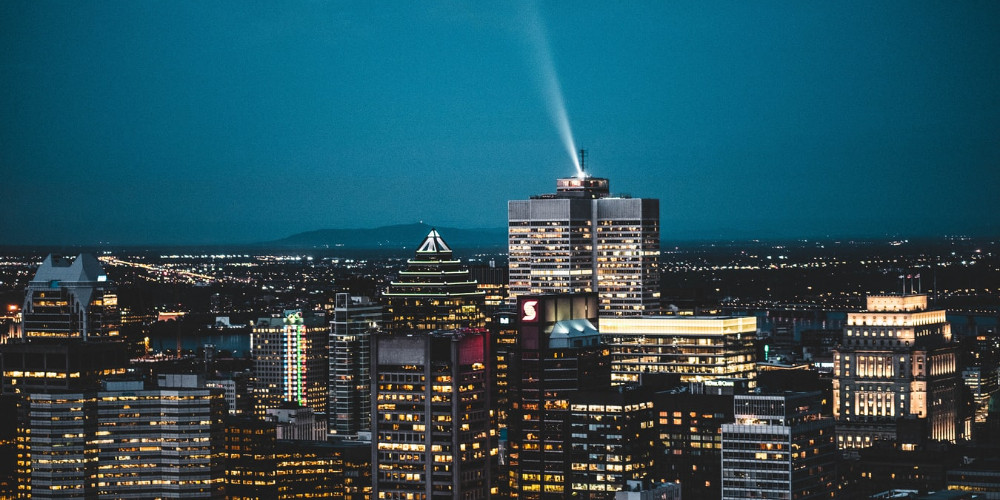 Located on the island of Saint Lawrence, Montreal flourished as a cosmopolitan center of communication and commerce. Jacques Cartier landed here in 1535 and occupied the territory for his King Francis I of France, but it was not until 1642 that Paul de Homedi established a small mission station here called Ville Marie de Mont-Real. This original settlement is now Montreal, the second-largest French-speaking city in the world. Despite the size of the city, the parts of Montreal that interest tourists are located in relatively compact areas. The main museums and art venues are located in the Centre-Ville area, where Rue Sherbrooke, perhaps the most elegant street in the city, is located. It is the backbone of the city and the location of many museums and other institutions. Rue Ste-Catherine is the main shopping street of Montreal, a busy street with department stores, shops, and restaurants.

Vieux-Montreal is one of the best Instagrammable places where the city began, and its original foundations and streets are preserved in the Pointe-a-Calliere Museum. It was the heart of the colonial city, and its old buildings make it the most Instagrammable area of the city. Here you will find most of the historical Montreal attractions, as well as the popular promenade along the Vieux Porte (Old Port). Fewer tourists spend time on the plateau, but it is the heart of French-speaking Montreal. Walking along Rue St. Denis, you will feel like you are in Paris with its chic boutiques, Montreal restaurants, and street cafes. It is home to some of the city's most popular restaurants, both along Rue Saint-Denis and elsewhere in the area, which has largely been shaped by successive waves of immigrants. At its far end is the Mile End, where small groups of streets have a pronounced Italian, Portuguese or Greek atmosphere.

Montreal on the map

Montreal is the second-most populous city in Canada and the most populous in the Canadian province of Quebec. Founded in 1642 as Ville-Marie, or "City of Mary", it is named after Mount Royal, a three-peak hill in the heart of the city. The city is centered on the island of Montreal, which takes its name from the same origin as the city, and on several much smaller peripheral islands, the largest of which is Ol Bizard. Montreal on the map is located 196 km (122 mi) east of the national capital of Ottawa and 258 km (160 mi) southwest of the provincial capital, Quebec City.

Montreal is home to several Canadian higher education institutions, including McGill University (currently ranked 35th in the world and second in Canada) and the University of Montreal (137th in the world and 5th in Canada). The universities of Montreal moved up two places in the 2019 QS Best Student Cities ranking and the city came in sixth place. Despite this drop, it is still the highest-rated city in North America.

Montreal performs well on five of the six metrics evaluated, ranking in the top 50 for all of them, with the exception of accessibility. The city is also regularly featured on lists of the best Instagrammable places to live in the world - and students seem to agree that the city ranks 2nd in the Student Choice index. What to see in Montreal?

Mount Royal rises 233 meters above the city and is the green lungs of the country near the city center. A walk through this Instagrammable park allows visitors to see the monuments of Jacques Cartier and King George VI, spend some time at the Lac-aux-Castors, and explore the cemeteries on the western slope, where the various ethnic groups of the city have lived together peacefully for centuries. From the top, or rather from the platform under the cross, there is a magnificent panorama of the entire 51-kilometer length of Ole de Montreal and St. Lawrence. On clear days, the view extends as far as the Adirondacks in the United States.

Old Montreal is an amazing concentration of buildings dating back to the 17th, 18th, and 19th centuries. The area has a delightful atmosphere of the Parisian quarter, located between the waterfront and the business center. Its many historical sites, streets, and attractions are best explored on foot. Among the many Montreal attractions here, you can visit the Museum of Archaeology and History of Pointe-a-Calaire, the two-story Basilica of Notre-Dame, the quays of the revived Old Port, as well as the open meeting space of the Place Jacques-Cartier.

High above the city, on the territory where the 1976 Summer Olympics were held, is the Parc Maisonneuve (Pi IX Metro), where Montreal's amazingly fantastic botanical garden is located. A variety of plants are grown in 30 themed gardens and 10 exhibition greenhouses, so there is a wide range of climatic conditions. Outdoor gardens include Instagrammable Japanese and Chinese gardens and gardens dedicated to alpine, aquatic, medicinal, shady, useful, and even poisonous plants. The rose showcases are stunning, and the garden dedicated to those plants grown or used by the first nations is particularly interesting. The floating greenhouses are home to tropical rainforest, ferns, orchids, bonsai, bromeliads, and punjingas (miniature Chinese trees). On the territory of the greenhouse there is an interesting insectarium and a huge arboretum, as well as ponds that are home to a variety of bird species. Address: 4101 Sherbrooke Street East, Montreal, Quebec.

Founded in 1656, Montreal's oldest church, the Basilica of Notre Dame, stands in a much grander incarnation than the original. The twin towers of the Neo-Gothic facade overlook the Place d'Armes. The intricate and luxurious interior was designed by Victor Bourgeois. Of particular note is the magnificent carved pulpit by the sculptor Louis-Philippe Hebert (1850-1917), the 7000-pipe organ by Casavant Freres, and the stained glass windows depicting scenes from the founding of Montreal. The entrance ticket to the basilica includes a 20-minute guided tour, or you can take a one-hour guided tour that will give you more historical information and access to private areas, including a second balcony and a crypt. Address: 110 Rue Notre-Dame-West, Montreal, Quebec

The Oratoire Saint-Joseph, located near the western exit of Mount Royal Park, is dedicated to the patron saint of Canada. It is a mecca for pilgrims, with its huge domed Renaissance-style basilica built-in 1924. Brother Andre of the congregation of Saint Croix had already built a small chapel here in 1904, where he performed miraculous cures, for which he was canonized in 1982. His grave is located in one of the parts of the sanctuary in the original chapel. In the second chapel, car gifts are displayed. The cloister behind the church leads to Mount Royal. The observatory offers a good Instagrammable view of Montreal and Lac Saint-Louis. Address: 3800 Queen Mary, Montreal, Quebec

Ile Sainte-Helene (named after the wife of Samuel de Champlain) and the artificial island of Notre Dame were the site of Expo ' 67. They are now known as the Jean Drapeau Park and have many family attractions. The biosphere, a remnant of the 1967 World's Fair, is now a museum dedicated to environmental issues. The building is designed in the shape of a sphere and is the largest in the world. Other tourist attractions in Montreal include the rides and games at La Rond Amusement Park, the historic 1820 British Arsenal at the Stewart Museum, the Bassin Olympic (where the Olympic rowing competitions were held), and the Circuit Gilles Villeneuve race track.

7. The Montreal Museum of Fine Arts

What to see in Montreal is literally art. The Museum of Fine Arts is the oldest museum in Canada and houses extensive collections of paintings, sculptures, and new media. Its outstanding collections of world cultures and Mediterranean archaeology number about 10,000 exhibits, as well as magnificent collections of African, Asian, and Islamic art, as well as art from the Americas. More than 1,400 paintings, sculptures, drawings, and engravings include masterpieces by Pieter Brueghel the Younger, Canaletto, El Greco, Gainsborough, Goya, Mantegna, Poussin, Rembrandt, Tiepolo, and Veronese, and are particularly strong in the works of art of the Dutch Golden Age. The collections continue through the realists and Impressionists to contemporary art, containing works by Cezanne, Dali, Miro, Monet, Derand, Kandinsky, Matisse, Picasso, Rodin, Otto Dix, and other influential artists. Not far from the museum is the sprawling McGill University campus. Address: 1380 Rue Sherbrooke Au, Montreal, Quebec

In one corner of the Place Royale in Vieux-Montreal is Pointe-a-Calliere, which is now marked by a stunning modern building that houses the Museum of Archaeology and History. The Place Royale was the center of life in Montreal's early and colonial times, housing a market and parade ground until later government buildings supplanted them. But beneath today's Montreal, there are still remnants of these early streets and foundations, and you can explore them by visiting the museum. The route through the history of the city begins underground, where you can walk through the original stone-paved streets, drainage channels, and the first floors of 17th-century buildings. The story unfolds in layers of history, told through artifacts, maps, and exhibits, as you climb into the museum. Special exhibitions cover a wide range of history and archaeology around the world. Address: 350 Place Royale, Montreal, Quebec

Place des arts is an entire complex dedicated to the visual and performing arts, the largest of its kind in all of Canada. It is home to three great cultural organizations: the Montreal Symphony Orchestra, the Canadian Ballets Ballet, and the Opera de Montreal, and its various stages and rehearsal rooms provide venues for all kinds of theater productions, music, dance, movies, and events. They are located around a large esplanade decorated with works of art, fountains, and water cascades - a popular event venue. The most important of these is the annual Summer International Jazz Festival in Montreal, which takes place in late June and early July and attracts visitors from all over the world, as well as some of the most famous jazz names. Especially worth a visit is the Museum of Modern Art in Montreal, especially as young French-Canadian artists are given special attention. Address: 185 Rue Saint-Catherine West, Montreal, Quebec

Similar establishments with many of the same vendors, Atwater Market and Jean-Talon Market are the busiest public markets in Montreal and are worth a visit for their atmosphere and local food and food. The markets, located in warehouse-type buildings, sell fruits and vegetables, flowers, meat, fish, cheese, baked goods, and specialty dishes. You'll find maple syrup and candy, dried blueberries, homemade fruit jams and preserves, and fine cheeses from the region, as well as restaurants and cafes selling mouth-watering pastries. The markets are a favorite stop for local Montreal people on Saturdays for coffee and a fresh croissant.

11. Mary, Queen of the World Cathedral

The Catholic Cathedral of Mary Queen of Peace, located east of Canada Square, was built in 1894 as a smaller version of St. Peter's Basilica in Rome. The massive statues represent the patron saints of Montreal's 13 19th-century parishes, all of which were sculpted by Olindo Gratton between 1892 and 1898. The most important piece of art in the interior is the crucifixion of Philip Ebert on the marble baptismal font. A series of nine paintings, seven of which are made by Georges Delfosse, tells about the turbulent history of Montreal. Address: 1085 Rue de la Cathedrale, Montreal, Quebec

The McCord Museum has an outstanding collection of exhibits on the social history of Canada, especially indigenous peoples. His collections of costumes, clothing, accessories, blankets and other handmade textiles number more than 20,000 items and include the work of Montreal fashion designers. More than a thousand pieces of furniture, silver, ceramics, glass, and items related to food and household items, as well as toys, sports equipment, and folk art, give color and everyday details to the picture of early Canadian life. First Nations artifacts and art include clothing and accessories, hunting and fishing equipment, weapons of war, household items, ceremonial items and art, and archaeological finds from early aboriginal cultures. Address: 690 Sherbrooke Street B, Montreal, Quebec

Topics
Apply for any visa in two clicks!
Cities
Do you want to get a Canada visa easily?
Get your visa now 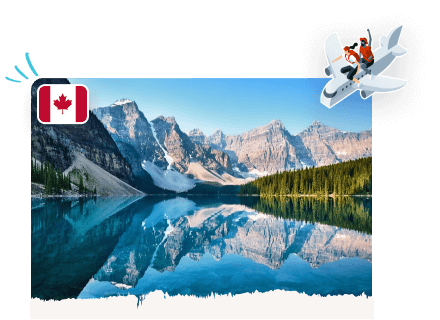