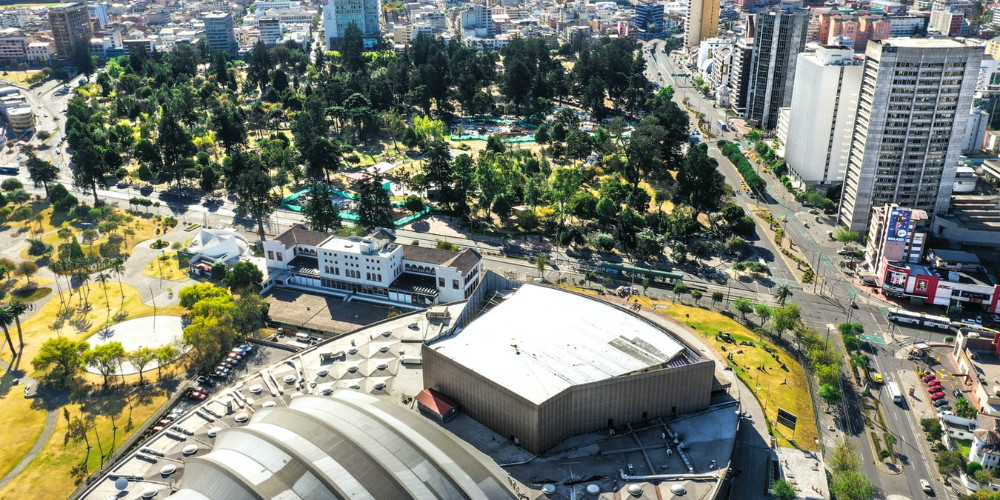 6. Church of San Francisco in Quito

Do you know where is Quito located? Quito is the capital of Ecuador, one of the most economically developed states in South America, and one of the most beautiful colonial cities on the continent. Each person who travels to Ecuador should visit its capital. It is located 24 kilometres south of the equator. It is so interesting and has so many cultural and historical values that in 1978 the city of Quito was completely included in the UNESCO World Heritage List. That's why we think you need to travel to Quito.

Quito was built at the end of the first millennium AD and today is home to under 2 million people.  Quito got its name from the Kitu Indian tribe, who lived in this area in ancient times.

One of the most Instagrammable places in Quito is Independence Square. Independence Square or Plaza de la Independencia, also known as Plaza Grande or Grand Plaza located in Quito, Ecuador, was built in 1534. The square is surrounded by the most important civil and religious buildings of the city - the Cathedral, the Government Palace, the Archbishop's Palace, and the City Hall. It has always been considered the centre of Quito. All these buildings form a harmonious architectural ensemble. The Cathedral with white walls and a tiled roof, located on the south side of the Plaza Grande, was built in 1678. It contains the graves of the most famous people of Ecuador, and Caspikara paints its interior.

The City Cathedral in Quito is located on Independence Square. We think it is one of the beautiful places to visit in Quito Ecuador. It is a large stately building with white walls and a tiled roof built in 1678 and rebuilt in 1806. Here are the graves of the most famous and important people of Ecuador.

The Cathedral's interior was painted by the best Indian artist who lived in the era of colonial rule, Caspikara.

Quito Cathedral is one of the most striking and beautiful architectural landmarks in Ecuador. When visiting this country, tourists are advised to stroll around Independence Square and enjoy the view of the ancient buildings located here.

The picturesque ruins of the Ingapirca fortress or, as it would be more correct to call this place, the Ingapirka archaeological complex, are located 90 kilometres north of the large city of Cuenca. Ingapirca is a hilltop ruin of an ancient Inca settlement. In translation from the ancient Quechua language Ingapirca means "Fortress of the Incas". The entire archaeological complex covers 240 square kilometres. If you are going to travel to Ecuador, write down this please for you to visit it.

It is believed that these ruins are the most significant mark left by the once-great Inca empire in Ecuador. The temple of the Sun, an impressive elliptical structure, attracts special attention in the complex. It is located so that during the spring and autumn solstice, sunlight hits the center of the main door at certain times of the day. This temple, according to archaeologists, was used not only for religious purposes but also for astronomical observations.

A distinctive feature of the ruins is the masonry, made without a fastening solution: the stones were adjusted to each other so precisely that it was impossible to put even a knife blade between them. Thanks to this adjustment of the stones, the Inca buildings withstood even strong earthquakes.

The 30-meter monument, marking the place where the equator passes, is located 26 km from Quito. It was erected in the 19th century to commemorate the first Geodetic Mission of the French Academy of Sciences. Despite the proven inaccuracy in measurements and the equator's actual passage a little further north, CiudadMitad del Mundo is very popular with tourists in Ecuador.

In the historical centre of Quito, there is an extraordinarily beautiful Basilica del Voto Nacional. This Roman Catholic cathedral is made in the Gothic style. Still, instead of the traditional chimaeras of Del Voto Nacional, there are figures of pelicans, turtles, monkeys, and other representatives of Ecuador's fauna. The highest tower of the basilica offers a beautiful view of the city.

6. Church of San Francisco in Quito

The Roman Catholic complex of St. Francis was built in Quito's capital, in the 16th century. The complex consists of the main church, a refectory, a wine cellar, a garden, and even a prison. The rich interior decoration makes the distinctive church of San Francisco extremely popular with visitors to Ecuador. This Church one of the most advised places to visit in Quito Ecuador.

Another one among all the most Instagrammable places in Quito is Sangay National Park. South of Quito is the Sangay National Park, which covers an area of over 5000 km². There are two active (Tungurahua and Sangay) and one extinct (Altar) volcanoes, mountain rivers and lakes, waterfalls and thermal springs. Tourists can climb the mountains on foot or by bicycle, and special trails are prepared for horseback riding.

In central Quito, the El Panecillo Hill, on top of which is the famous statue of the Virgin Mary, is one of the most amazing places to visit in Quito. The hill is one of the most visited places in Quito, as the 41-meter Virgin Mary is visible from almost any part of the city. Built-in the 1970s, Madonna is depicted as a winged angel standing on the globe and crushing a snake with her feet. There is an observation deck at the top of the statue, which tourists love to visit.

If you travel to Quito, visit Carondelet Palace. The Government and President of Ecuador's residence, located on Independence Square in Quito, was built in the 16th century. After Ecuador gained independence, Carondelet got its current name and was used as a presidential palace. Since 2007, the residence is available for visiting by everyone.

If you are still don't know which places to visit in Quito and what to do in Quito, think about botanical gardens. There are many parks in Quito, but we would recommend Carolina Park. Not the entire park, but a botanical garden located in the very centre of the park. Plants brought to this garden from all over South America, where is Quito situated, are striking in their diversity.

This church has a slightly shorter history than the Church of San Francisco. Their age difference is only seventy years. However, it is worth noting that the Jesuits built this church in one thousand six hundred and five.

If you are going to this city, you should know that it will be very difficult to find a hotel here at a normal price and with normal living conditions. If you want cleanliness and comfort, you will have to pay about one hundred and fifty conventional units to stay in a hotel room one day. It is also worth noting that if you want something more, then the prices will also be much higher - in some hotels and hotels, the price per night in a room reaches six hundred and fifty conventional units. If you choose a room at a meagre price, then no one will guarantee you comfort and cleanliness, although the prices for such rooms do not exceed fifty conventional units per night.

After reading this article, we hope that you found the answer to what to do in Quito and what to visit. We also advise you to visit some other cities in Ecuador where is Quito, to broaden your horizons.  Travel to Quito and other cities and have a nice trip!