is a wild gem of the Indian Ocean, rich in natural treasures: active volcanoes, beaches and lagoons, mountains, untouched wild rainforests, waterfalls and much more. The inhabitants of the island of Reunion are hospitable and always welcome tourists. Do you know where is Reunion? This French island, located off the African coast in the Indian Ocean, offers you an incredible and memorable vacation. In this article, we will tell you about 12 Instagrammable places of the Reunion.

Cirque de Mafate is a unique and untouched Instagrammable place on the island, formed after the Piton de Nege volcano's eruption and is considered a real gem of Reunion nature, history, and culture, which can not be photographed during a trip to Reunion Island. On the territory of Cirque de Mafate, there are small villages. It seems as if they hang from numerous ramparts and create a huge impression on tourists from the outside. For a few hours of walking around the Cirque de Mafat, you will feel as if you will go into a completely different world, and the heart of the Reunion will absorb you with its natural beauty. There are old hiking trails, cottages, and even grocery stores leftover from centuries past. Cirque de Mafat will enchant you with its spectacular viewing platforms and waterfalls. Tourists are advised to explore Cirque de Mafate fully, so if you travel to Reunion Island, give this place at least two days. We also recommend you to enjoy the cloudless starry sky as if frozen like a picture for centuries.

Since humans settled the island in the mid-17th century, more than 250 eruptions of the Piton de la Fournaise have been observed. At the moment, it is one of the most active volcanoes on the planet. In addition to Piton de la Fournaise eruptions, the volcano fascinates with its beauty: ledges and lava flows are a real fire show that attracts a crowd. Each eruption of the volcano changes the area's landscape, causing new peaks and craters in some Instagrammable places. Some lava flows reach the ocean and increase the area of the island. As a result of the Piton de la Fournaise eruptions, spectacular landscape changes regularly occur on Reunion. The last of these occurred in 2007 when the volcano summit suddenly collapsed as a result of a large-scale eruption that happened in its low slopes in Grand Brule.

The Reunion National Park covers a vast area of 105,447 hectares and covers 42% of the island's surface and includes many calderas and volcanoes, such as Cirque de Mafate, Cirque de Silao, as well as the Piton de la Fournaise and Piton de Neige. Many of these natural wonders are included in the UNESCO World Heritage List. Besides the beauty of the landscape, the Instagrammable landscape, and the natural grandeur, the National Park is also unique because of its rich flora and fauna. There are 230 species of endemic plants and trees and several species of birds, such as the Bourbon black petrel and the Barau petrel. Often the National Park of Reunion is called a paradise for tourists because here, in addition to relaxing away from civilization, a person can stay alone and capture all the beauty of untouched Reunion nature.

The Creole village of El Burg, located in the heart of Cirque de Salasi, has preserved its primaeval nature and has become a tourist centre. The village's advantage and the colourful huts, Instagrammable gardens and villas, are also the thermal springs. However, the Creole villages are not limited to El Burg – such authenticity can be found in 16 villages across the island, which locals call Reunion's heart and are proud of them.

5. The grave of the last pirate

Olivier Levasseur is one of the most famous pirates in the history of Europe. Being a nightmare for ships on the high seas, Levasseur, known as "La Buse", robbed large ships, attacked and killed the military fleets of France, England, Portugal and other countries. There is believe that Levasseur hid one of the largest treasures in the history of piracy. According to legend, before the execution, "La Buse" unexpectedly shouts: "Find my treasures, who can!" and throws a cryptogram into the crowd, which indicates the location of the treasure. The Levasseur cryptogram has not yet been deciphered. The most common version of the treasure "La Busa" is hidden on one of the Seychelles Islands, but the treasure has not been found. There is also a version about the treasure's burial on one of the islands of the Indian Ocean.  Levasseur himself was executed in Saint-Pol and was buried in the cemetery of Cimetiere. Who knows, maybe you will find the treasure of one of the most famous pirates in history?!

is a small resort town with about 6 thousand inhabitants and an area of 85 km2, located in the heart of the island of Reunion, south of the Piton de Neige volcano. Not all historians agree on the origin of its name: some believe that the word came from the Malagasy word "Tsilaosa", which means "a place where a person is safe". Others claim that the name comes from a Malagasy slave named Tsilaos. Anyway, Cirque de Cilaos is a pleasant and soothing place where every tourist feels great. The development of tourism on the island began in the late 19th century when pools and therapeutic baths were built around the Silao thermal springs. Cirque de Cilaos resembles an ordinary volcanic crater. Still, it results from the action of our planet's tectonic plates, the same ones that created the famous Matterhorn peak in Switzerland. Silao is one of the great Instagrammable places to walk along the mountain slopes and trails and has scenic ocean views, where you can get some fresh air, recharge your batteries and take most liked Instagram photos. You can also find in Cirque de Cilaos the most famous waterfall on the island- the Cascade de Bras Rouge, located among the mountains and lush vegetation. A fascinating view attracts tourists.

7. Garden of perfumes and spices

Located in the heart of the southern part of the island, in the city of Saint-Philippe, the garden of perfumes and spices, which is more than 800 years old, is considered an oasis of peace and tranquillity. The garden has over 1,500 types of flowers, trees, shrubs and spices. Centuries-old trees, endemics and unique flowers that grow only on Reunion are collected in a kind of "collection" of the Long rainforest. Here you can find such trees and flowers as carnation, cardamom, ylang-ylang, palm, orchid, fern and many fruit trees, considered the treasures of the flora of Reunion! The entrance to the garden was opened in 1989 and is free of charge and is considered the property of the island, so even the most budget tourist on the island will be able to enjoy the greatness of Reunion nature, the variety of plants and merge in harmony with the environment.

Located on the west coast of the island, near the town of Saint-Leu, Kelonia is a place for nature conservation and a research centre for sea turtles. Here is carefully monitored for sea turtles, which are becoming less and less on our planet. In the Kelonia, specialists and volunteers treat sick and injured turtles and return them to the ocean. The Sea Turtle Observatory is open to both locals and tourists and consists of three zones: 1. Discovery - Here, you can get acquainted with sea turtles' life and watch the recovery of injured and sick animals in special pools. 2. Museum - In the museum, tourists will be told in detail about the history of the observatory, and they will also be able to look at the exhibition with interesting exhibits. 3. Avenir - an interactive tour with lots of videos and photos, introducing visitors to these amazing mammals. You can also make donations to feel part of our nature and make a small contribution to the conservation of sea turtles. Besides, the observatory has an observation deck, a visit to which is mandatory in all tourist guides. From there, you can enjoy an incredible view of the Bay of Saint-Leu and have the opportunity to take some most liked Instagram photos for social networks and make your friends a little jealous! A bonus is the souvenir shops located around the observatory. You can buy a memorable gift for yourself and friends for a small amount who will enjoy an interesting magnet in the form of a turtle on your refrigerator.

The Stella Matutina Museum, located in the same name's former sugar factory, opened in 1991. Developing the cane industry, the Reunion residents are very proud of this museum, which has long been a source of income for the residents of this proud island. In the 19th century, the French authorities abandoned coffee cultivation in Reunion and started growing sugar cane. This tradition formed the basis of the museum, clearly showing the development of industry, the history of the migration of slaves and mercenaries to the island, and how the fate of the inhabitants of Reunion changed. The museum also has an extensive collection of items related to the extraction of sugar cane, early machines, and tools. The renovated museum was opened in 2015 and is a great place to get to know the island itself and its history.

Piton de Neige is an extinct volcano and the Reunion island's highest point at 3,070 meters above sea level. The name Python de Nege means "Snow Peak". The inhabitants so-called the volcano because of the fact that during the tropical winter, the top is covered with snow, which rarely happens in the flat part of the island. According to scientists, the last eruption of the volcano occurred 12 thousand years ago, so you can easily climb to the top, attracting inaccessibility. For fans of such extreme tourism, two-day tours are organized on the island. However, according to those who have visited the top of the "Snow Peak", seeing the sunrise from the mountain, you will never forget it and will want to stop the moment. And as you know, photos of dawn are sure to collect many likes from your friends. And if it's dawn from the highest point of Reunion, then…

As we have already written, Reunion is a volcanic island and the eruption of volcanoes, especially the Piton de Neige and the Piton de la Fournaise, left a huge mark on the landscape of Reunion. After the volcanic eruption, back when the island was uninhabited, the lava flowed along its route to the sea, so now you can walk along the same route and see the greatness of Reunion nature. Walking down the summit, you will walk straight to the shore of the Indian Ocean, enjoying the dense rainforest and unique flora around!

12. The Reunion beaches of L'Ermitage and La Saline-les-Bains

Saint-Paul is home to two of the most famous Reunion beaches – The beaches of L'Ermitage and La Saline-les-Bains. Instagrammable beaches with fine sand, windless weather and a real paradise of tranquility are a favourite place to relax among the island's residents and incoming tourists. The Instagrammable lagoon and coral reefs around the beaches also make these Instagrammable places attractive. Fabulous sunrises and sunsets on the beach will definitely make you reach for your phone and camera to capture this moment for your Instagram. Also, you can rent diving equipment on the beach and get a closer look at the marine nature of the ocean. Enjoy your stay!

Topics
Apply for any visa in two clicks!
Countries
Do you want to get a Reunion visa easily?
Get your visa now 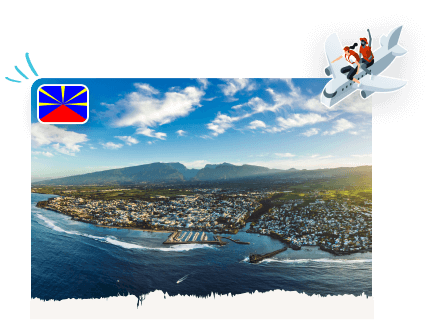