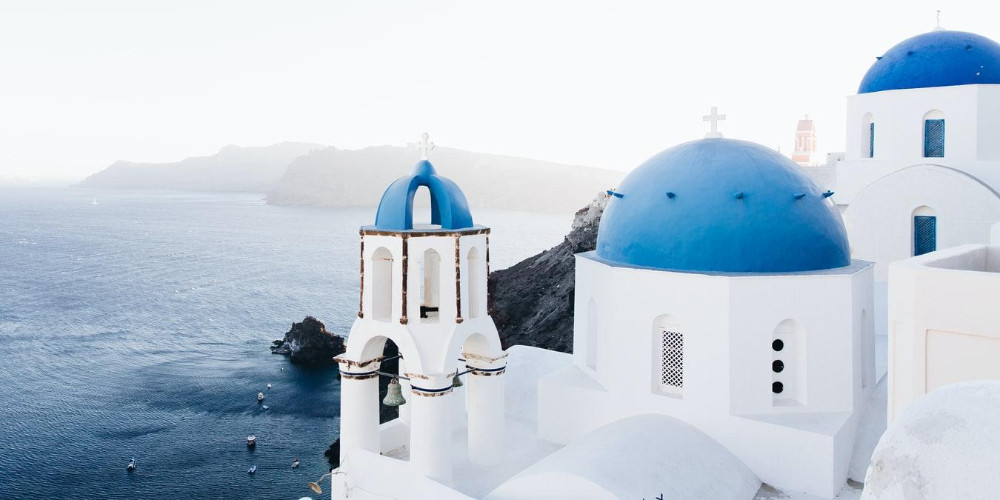 It is, without a doubt, at the top of the best places in Santorini to admire the spectacle of the sunset. Built-in the northern tip of the island, this picturesque village is one of the most evocative villages of the Cyclades, and the restoration work after the earthquake helped to enhance its beauty. Despite a few luxury boutiques in its alleys and bars overlooking the Caldera, Oia still tries to maintain an ancient charm, and it is here that you will have the exciting encounter with the most photographed blue dome in the world. You will not want to go home without this shot. You can stay here for a while and take several of the most liked Instagram photos.

During your travel to Santorini, you cannot miss a visit to the most beautiful and famous beaches on the island. Along the southeastern coast, the large rock Mesa Vouno divides two beautiful seaside resorts: Perissa and Kamari. Perissa beach is a huge 8-km long volcanic black sand beach, exposed to winds and therefore perfect for water sports; the chicest version is Kamari beach, also with black sand and full of umbrellas and sunbeds. In the south-western part, there is the Red Beach, a small but fascinating tongue of volcanic sand, with a red and black color, surrounded by high reddish rocky walls: it is an equipped beach but, given its small size, it is better to reach it early in the morning to avoid crowding of tourists and to take your most liked photo on Instagram.

In Santorini, you can visit the archaeological site of Akrotiri, one of the most Instagrammable places in Santorini, an ancient city buried in volcanic ash during the catastrophic eruption of 1613 BC. Discovered thanks to Professor Spiridion Marinatos, the Minoan Pompeii saw the light through the archaeological excavations of 1967 and still allows us to observe what survived the cataclysm: the two and three-story buildings, the streets, the sewer system, and various tools for common use. This archaeological site is a must-see place during your travel to Santorini.

There are not only the excavations of Akrotiri. The remains of ancient Thira on the rock of Mesa Vouna in a panoramic position at about 400 meters above sea level is one of the best places in Santorini you must see. There are several ways to get up here: simpler ones - the advice, for those who go up on foot, is to wear comfortable hiking shoes - are the two that unravel from the beaches of Kamari and Perissa, the ancient landings of this citadel inhabited since the ninth century BC Entrance to the excavations is free with the possibility of using a guide on-site to move more easily among the ruins of the temple of Dionysus, sanctuaries of Apollo and Artemidorus, the Roman baths, the Byzantine walls and other vestiges of this ancient city awarded by one of the most beautiful views in the world.

The Akrotiri lighthouse trip is a must when looking for what to do in Santorini. After two steps in the traditional village to get to know the Akrotiri castle, after getting off at the archaeological site and the Red Beach, the next step will be to follow the signs for the "Faros." And so you will immerse yourself in a countryside environment, almost rural, up to the point where the road will suddenly end, without space and without even a pitch to manoeuvre: parking at the Akrotiri lighthouse is difficult. You should not let yourself be tempted by the desire to get as close as possible, because then turning when you see that everything is full will be a little nightmare! The road, however, at a certain point it becomes a path, the trees end, and you find yourself alone, face to face with the Caldera, staring at this white and green lighthouse that seems to have come out of Normandy or the more Breton coasts. Here you will have a chance to take your most liked Instagram photos.

The tomato museum of Vlychada is a tasty surprise, ideal for taking a little break from sunbathing from the nearby beach, a tasty opportunity to discover what things to do in Santorini, without necessarily having to find yourself wandering among luxury Santorini hotels and shops. In the tomato museum of Vlychada, you will be able to see the ancient industrial machines for the production of pulp, accounting books, and discover the history of one of the most typical products of Santorini: the tomato. You can taste the preserve, accompanied by local breadsticks, and watch the screening of period films. These are told, by the old workers of the factory, all the processes of production, the history, and the owners' faces, the Nomikos family. Last but not least, you can produce a tin of tomatoes himself, to take home as a souvenir.

The cave and small chapel of Zoodochos Pigi are among the nicest places to see. You will be right in front of a rural church, on the road along the path that goes from Kamari to Ancient Thera and dedicated to the source of life. However, in its naive, sincere simplicity, Zoodochos Pigi is one of the most evocative things to see. Here flows the only natural freshwater spring in all of Santorini. Stopping in the shade of the tree next to the church and hearing the water flow inside the cave is a pleasure as minimal as it is priceless.

Santorini is full of medieval castles. The island has always been an important hub of trade routes between Europe and Asia, a stopover on the famous Silk Road. Thus, among the many things that tourists have yet to discover on the island are amazing castles to see, which also offer impressive panoramic views. Most of Santorini's castles were built during the Venetian occupation, and their main purpose was to protect the inhabitants from the greatest threat of the time, pirate attacks. The most beautiful and highest traditional village of Santorini is dominated by a Venetian castle of Pyrgos dating back to 1580. It offers sweeping and beautiful views of the whole island from a different and unusual perspective, and it is one of the sights to see in Santorini truly unmissable.

Trail number 9 is the king of possible treks in Santorini. A creepy 9-kilometer route, all ups and downs, and breathtaking views, always interesting and which allows you to appreciate the most unmissable part of the Caldera, also crossing the entire village of Imerovigli. The recommended departure is always from Fira; the signs are well marked already from the main square via 25 Martiou. It takes about 2-4 hours to complete it, depending on how long you stop to take pictures and videos, but the travel time does not matter.

The Karavolades staircase is the most popular of Santorini, the Cycladic equivalent of Trinita Monti. It serves to connect the capital Fira with the old port, the one where day trips depart and are used by all the large ships that stopover in Santorini during their cruise in Greece.

Santorini is a land of churches. They are everywhere: and although Santorini is quite small, religious monuments spring up like mushrooms in its various villages. Metropolitan Cathedral is the one located in the centre of Fira, in the square from which the characteristic alleys of the centre then unravel. A triumph of white and beautiful harmonic lines.