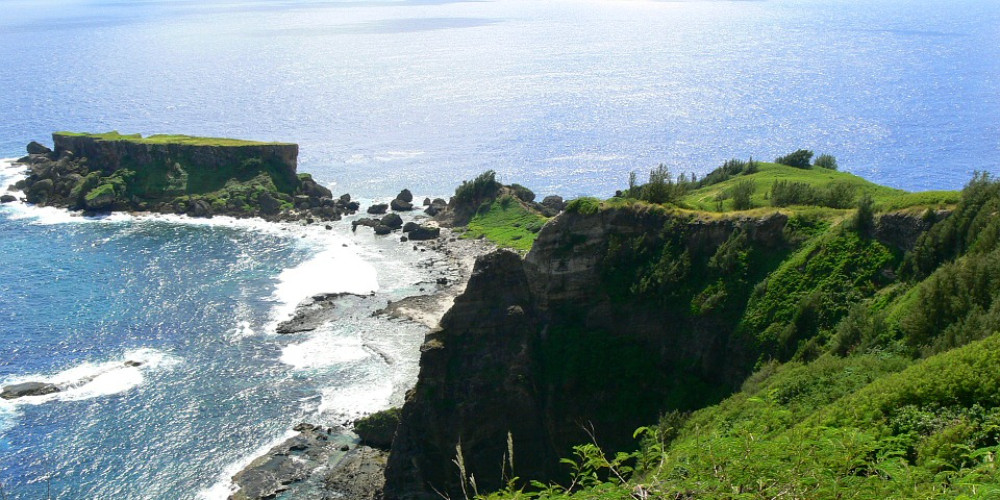 With an incredible scenic view, Banzai Cliff will decorate your gallery and Instagram profile with very cool shots. You may wonder how this place got its name. Well, the area has a bizarre history related to the Second World War. Banzai Cliff is located on Saipan Island. The Japanese troops occupied the island and had a stronghold there. After the defeat of the US army, the death toll on the island still kept on rising. It was because of Banzai Cliff. During the bloody battle, the Japanese incurred heavy casualties. Those Japanese who survived did not want to become hostages went to that cliff and committed suicide by jumping into the rocky water. When jumping into death, these Japanese screamed “Banzai,” wishing the emperor thousands of years of life. Those screams and suicides earned the cliff the name of Banzai Cliff. No one knows the exact number of suicides. But the estimates go around one thousand suicides. The US soldiers presumably tried to prevent some Japanese from jumping off that cliff, but they failed.

Incredibly beautiful Taga Beach is another reason why you should travel to Northern Mariana Islands. The beach is in the village of San Jose, Northern Mariana Islands. San Jose is the largest village on Tinian Island. It is a clear sunny beach surrounded by natural beauties such as coral reefs. The water is very warm there, making swimming a very pleasant experience. When you go there, you will notice there are 15-foot high cliffs on both sides of the beach, making it amazing to jump off the cliff – of course, not like Banzai Cliff, as here, blue waters are not rocky. But if you are afraid of heights, there is no need to worry since you will be able to use the stairs. In general, Taga Beach is an excellent place for people of all ages to enjoy a sandy beach with colorful reefs, warm water, and scenic sunset.

This is the island you would not regret calling a paradise. It is an awesome place for snorkelers to enjoy the water. Into the blue (just like the movie “Into the Wild”) is the main motto of visitors to this “Nature’s Treasure Island.” This tiny island gets more tourists yearly than the number of its total residents. Scuba diving and snorkeling are the main activities on the island. When diving into the blue, you will find amazingly interesting places to explore, such as the WWII wreck of the Shoun Maru and a collapsed limestone cave. The island is where nature meets culture. You don’t want to miss the chance of seeing Wedding Cake Mountain, Tweksberry Park, and the Marianas Trench Cave Museum.

Do you want to explore a hidden and forbidden place? Of course, you do! Who wouldn’t?! Visiting and exploring Forbidden Island is not only "forbidden" but recommended as well. With its picturesque nature, bird sanctuary, and underwater beauties, this forbidden place will amaze you. The island is located in the southeast part of Saipan Island. So, how to travel to Northern Mariana Islands' forbidden site? Tourists can go to Forbidden Island through the village of Kagman. The way to that forbidden place goes through unsurfaced tracks, so you should get a 4x4 vehicle. After a certain point, you have to hike for about 40 minutes to reach Forbidden Island. Getting it is a bit difficult, but it is definitely worth visiting this forbidden place.

Where are the Northern Mariana Islands

? They are where one and the only real use of the atomic bomb started. Yes, I am referring to Hiroshima and Nagasaki. The world’s first-ever nuclear bomb attack happened to Japan. The US soldiers loaded a B-29 bomber with an atomic bomb on Tinian Island, one of the chains of islands of Northern Marianas. Today that place with loading pits remains as a historic place, where the atom age began. Being located about 2,400 kilometers (1,500 miles) away from Japan, Tinian was an ideal place for the US air force. The North Field on Tinian was the world’s largest airport at that time, which made it possible for the US bombardiers to launch a deadly attack on Japan. So, the Northern Mariana Islands flag definitely deserves its star thanks to its service to the USA in WWII.

Another impressive site to visit on the tiny island of Tinian is the House of Taga. This amazing place is in the village of San Jose, east of Kammer Beach. This megalithic place used to be a collection of large erect stones. As a very long time passed after their construction, these stones are now fallen. The main purpose of these 15-feet tall stones was to support the house built with wood and straw. People in prehistoric times put hemispherical tops on these tall stones. Historians and scientists presume that it was the earthquake serving as the main reason for the fall of these stones. Today, only one out of fifteen stones stand erect.

Those who are in search of serenity should not miss the chance of visiting Obyan Beach. It is a place the Northern Mariana Islands population call a paradise. This amazing idyllic place will make you fall in love with Northern Marianas. Obyan is an excellent spot for swimming, beachcombing, and diving. After enjoying the serene beach, you may explore the area easily, thanks to hiking trails. While hiking, you may stumble upon some remains of World War II. For example, you will find a small hole on the ground, which used to be an exit tunnel of the Japanese, leading to an oceanside cave. Alongside picturesque landscapes, you will also find the Japanese gun bunkers.

Being located in the Garapan, an Old Japanese lighthouse offers a panoramic view of the city. It is one of the remainders of the pre-WWII Japanese structures. There is a lot of graffiti on the wall of the lighthouse. It is a perfect place to enjoy the sunset. The Japanese built this lighthouse in 1934 to help ships coming into Tanapag Harbor on the western coasts of the island.

If you happen to visit the Northern Mariana Islands in mid-April, you will be lucky to attend the Flame Tree Festival. It is the longest-running cultural and traditional festival in the western part of the Pacific region. The entrance is free of charge, so everyone can enjoy it. Every year, the festival happens at Saipan’s Civic Center Beach Park. You will enjoy sampling local food and drinks, watching local and contemporary arts, music, and dance, as well as a canoe exhibition.

Another place worthy of a visit is the Old Japanese Jail. This spooky place is located in Garapan, in the Northern Mariana Islands capital. The Japanese kept American soldiers captured after the Battle of Saipan in this jail. Today, you will find graffiti made by soldiers on the walls of the jail. In this spooky jail, you will find the marks of WWII, which remained almost intact. Amazing pictures from the Old Japanese Jail will be an excellent addition to your gallery.

Apply for any visa in two clicks!
Topics
Islands
Do you want to get a Northern Mariana Islands visa easily?
Get your visa now