14 reasons why you should travel to Panama right now 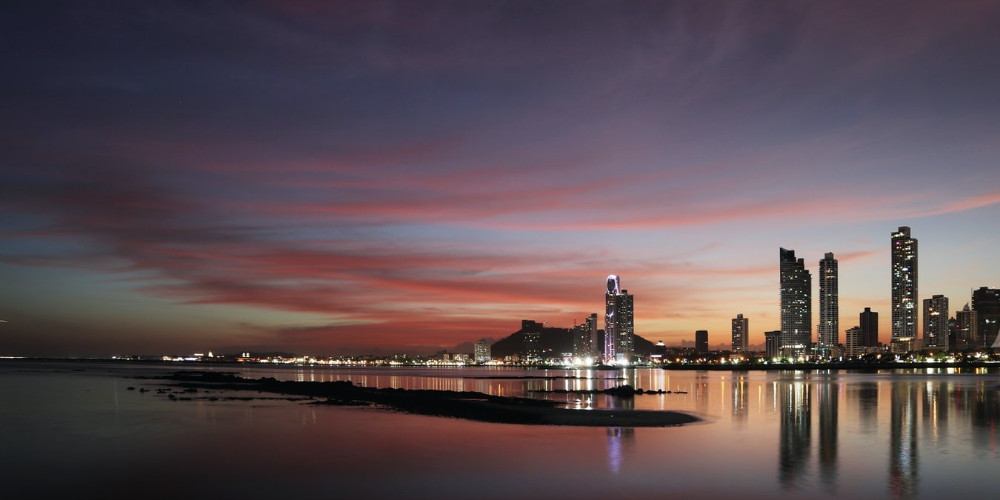 There are many reasons to get together and travel to Panama. One of them is to be on a journey all the time because Panama is a very diverse country. Republic of Panama: the short essence of these 14 reasons. Playing, flipping a coin, Heads and Tails Panama, and it doesn't matter what falls out of them. Let's begin the story where Panama is. All textbooks and on the Internet have one brief and clear definition: Panama is located on a bizarre narrow isthmus that connects two continents - Central and South America.  And on Panama's shores, two oceans splash together.  On one side is the Atlantic Ocean, on the other - the Pacific Ocean. Simply chic!

Are you wondering where is Panama? Well, the Republic of Panama is simultaneously located in both Central and South America. Panama on the world map is a small area between the Caribbean Sea and the Pacific Ocean. Its land has a neighbour with only two countries - Costa Rica in the North and Colombia in the South. From the east and west, there are boundless seas and oceans. The Republic of Panama is a state in Central America. This country owns about 1600 small islands. About a thousand in the Pacific Ocean and over 600 in the Caribbean Sea. The capital of Panama. The official language is Spanish, but there are many places where English is spoken.

What is the currency of the Republic of Panama?

with you to this country. And do not worry, if you are given change in coins, not paper bills, Panamanians do not have them. In the Republic of Panama, the Panama currency is Balboa; the rate is 1:1. It is worth adding that in the capital credit cards are accepted almost everywhere, but outside the capital they prefer cash. The Republic of Panama is divided into 9 provinces and three autonomous regions.

What is well known about Panama is the Panama Canal. The economic power of the country and the centre of engineering tourism. It is a marvellous construction—one of the most complicated structures of all times and peoples. Are you wondering how long is the Panama Canal? Well, the Panama Canal connects the two oceans by an artificial water artery 81.6 kilometres long, 12 meters deep. The Panama Canal operates since 1920. In the world shipbuilding, the Panama Canal has become a standard in terms of dimensions of ships Panamax.

Panama is associated with its world-famous Canal - it is natural, the Panama Canal is a business card of the Republic. But there are also a lot of other sights that impress with their quantity on such a small territory. It should be divided into several segments according to its features. In Panama, the sights are nature, cities, history, shopping, architecture, museums and exhibitions, reserves, and islands of the Caribbean Sea and Ocean. These are the very 14 reasons why you should travel to Panama right now.  The Republic of Panama is not only between two oceans. It is surrounded by an area of equatorial forests, which have remained practically untouched by man. A great variety of flora and fauna awaits wildlife lovers and followers of ecotourism, everything here is curious. In the Republic of Panama, the sights are, of course, nature and not only on land.  Panama is on the world map with its archipelagos and numerous islands, which are located close to each other and separately, with white sand beaches, and the purest seawater. As a rule, there are no crowds of people on the islands, and there is always a place for seclusion, to relax from the hustle and bustle. And those who like to walk will be surprised with pleasant surprises. In the Republic of Panama, the sights are also its cities. There are not many of them, and all of them are interesting for travelling goals and objectives. We read the article further and define these goals and objectives, or play the eagle of Panama as in the famous TV program. And we make bets!

The City of Boquet

Famous for coffee connoisseurs. Here is the most delicious coffee in the world. Boquet located at an altitude of 1200 meters above sea level, that is in the mountains. It has its natural climate, which is very relaxing for both local and tourists, and everyone is happy and smiling. This place is considered a paradise by its nature, located in the river valley, surrounded by mountains and a cosy little town. Panama City is a modern city with all the ensuing consequences of a metropolis, stretching along the coast for 10 km. A couple of days is enough to explore it. The city is not rich insights. It is worth walking along the boulevards of Balboa, go to the church of San Jose. Tourists usually visit the Panama Canal, the old town of Casco Viejo, which can be called a tourist centre in the capital of Panama, Panama City. Casco Viejo is a clean, tidy colonial-style city with a 100% tourist infrastructure with restaurants, hotels, boutiques, promenade and business centre. And then back to the tropical forests or islands, having previously entered the malls of Panama City. Here are some of them: Multiplaza Panama Albrook Mall, Multicentro Mall.

One of the largest trading cities, including Latin America.  Shopping tour duty-free zone with many stores of different formats. Here are purchased numerous wholesalers from the continent. And to go on a shopping tour, it is worth exploring this topic, in order not to lose precious time. It is quite possible to buy certain goods, clothes, shoes, belts and much more in the stores at for the low price. Panama currency is Balboa, as it was written before, but here you will need dollars. Do not forget to bring cash. The most interesting and picturesque way to travel here is to take a ride on the restored railway in elegant wooden wagons with carpeted paths, for all this travel will take an hour, which goes through a tropical forest. Then, you can go shopping in numerous boutiques. Or take a walk on a cruise ship by the sea, have a snack at the ship's restaurant, and then the boutiques. Then it is worth mentioning the markets in Panama. They are outstanding and have an atmosphere. It is believed that the markets are the best place to taste truly Panamanian dishes.

Portobelo is a city founded by Christopher Columbus in 1502 on the Caribbean Sea coast. Once a Spanish port, ruined by pirates. Now it is a quiet provincial small town, where everything is imbued with legends, history of the seas and pirates. Yes! And here's what else is interesting about this place. Here in the local church is the only black statue of Christ in the world.

And if the pirates were mentioned, it is worth telling about the pirate base, located in the Caribbean Sea on the Bocas del Toro archipelago, which attracts many tourists. The base is no longer there, of course, hotels and hotels are in its place. However, the sea remembers these guys. And the sea here is clear turquoise with long white sand beaches. It is a very famous tourist area in the Republic of Panama.

Museums and exhibitions will help to diversify your stay and learn something new. They are worth visiting when you are in town. The Panama Canal is an excellent construction, and how can there be no museum here? Museum of Panama Canal Interoceanic. The museum exhibits are located on several floors. There is everything about its construction, from posters to hand tools. Besides that, the museum exhibits the development of Panama. And from the observation deck, you can watch how ships pass by. In addition to this exciting museum, you can visit the art galleries, which are now a fashionable theme for bringing paintings from different parts of the world. Fascinating place - Bio-museum. What emotions is the hall with the effect of immersion in the wilderness, and so it is quite interesting and design, architecture and exhibits. Las Bovedas fortress was built to store and protect gold and silver from pirate invasions.  And now it is used as a cultural repository, namely an art gallery.

Panama attractions: islands in the ocean

Contadora Island is located in the Gulf of Panama in the Pacific Ocean - a work of nature with transparent green and turquoise waters of the ocean. By the way, the biggest pearl on the planet was found here. The island has a lot to do: water sports, sail around the island, windsurf, dive with a mask and flippers, feel like a pearl catcher. The most visited islands of the Pacific Ocean are Saboga, Chapera, Mogo Mogo, Paceca, Viveros el Rey and San Jose Island. In these places, you can go sport fishing and watch whales between July and October.

The Cocobolo Reserve is one of the best places to visit in Panama. The Cocobolo Reserve is a dense forest, through which hiking trails pass. It is home to more than 300 species of different birds, creating a unique natural background in the woods. A large number of plant species, such as wild orchids, are revered throughout the world. The Cocobolo is an extension of the Nargana Wilderness Protection Zone and the Chagres National Park, occupying hundreds of thousands of hectares of pristine forests, where rare and endangered species live, it is worth going there to see, and at the same time to communicate and see the life of indigenous people - Indians who live in these forests and have preserved their interesting traditions.

Coiba is a National Park and Reserve in the sea Pacific coast of Panama. It is included in the UNESCO World Heritage List, which says a lot. One can see very rare inhabitants of the seas and oceans there.

Talamanca mountains range is the territory of the most impressive national park with its Baru volcano, with the highest point of Panama - 3.4 thousand meters above sea level. You can climb it. It is a place, loved by conquerors of mountain peaks and steep rocks, and just by fans of mountain travels. It's great there, mountain air, hiking with beautiful scenery. Besides all this, there are thermal springs—the combination of pleasant with useful.  And now let's summarize 14 reasons why you should travel to Panama right now:  1. Watch the Panama Canal and the huge ships that pass through. 2. To visit different oceans in one trip. 3. Visit various exhibitions and museums in Panama. 4. Visit the natural and protected areas of the country, there you will find a dozen reasons from volcanoes to wild forests to travel to Panama right now. 5. Visit the different islands. 6. Traveling through the islands of the Caribbean Sea, which was a kingdom of pirates. 7. Tan on sandy beaches and swim in the turquoise water. 8. Admire the exotic orchids in the forests of Panama. 9. Walk around the capital of Panama, Panama City. 10. Visit the Azuero Peninsula. 11. Going on a small adventure by canoe on the river Embera. 12. Try the local cuisine in different places to visit in Panama. 13. Beautiful shopping with a large selection of products of both local craftsmen as well as shopping for famous international brands. 14. Water sports.

Topics
Apply for any visa in two clicks!
Countries
Do you want to get a Panama visa easily?
Get your visa now 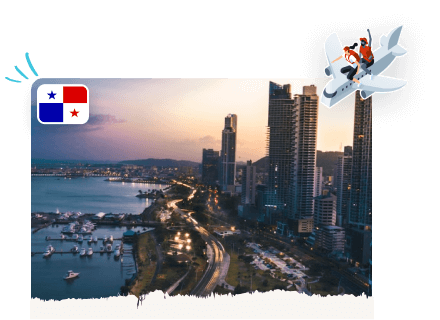