11 reasons why you should travel to San Marino right now 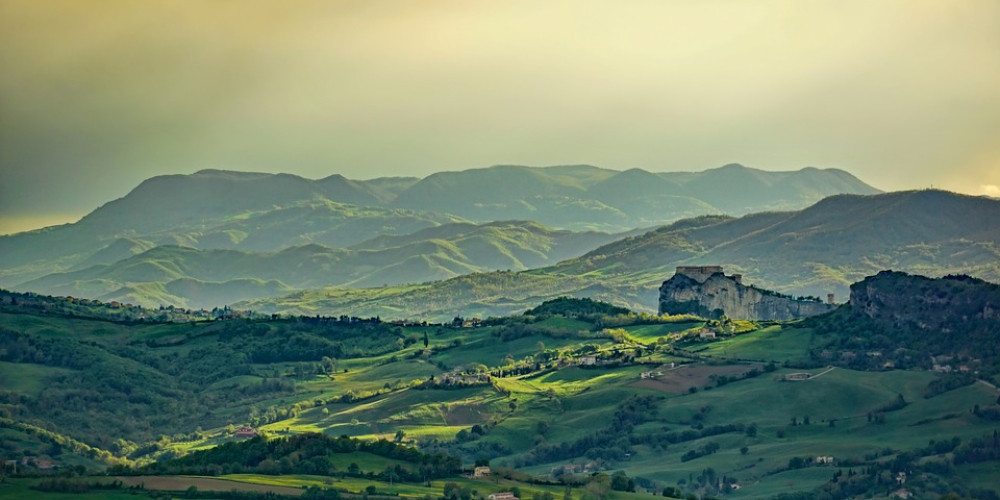 What can you expect from tiny countries? Can the average tourist find something interesting and informative for themselves in such places? If we are talking about San Marino, then I will answer "YES". Where is San Marino located? This stunning European republic has borders only with Italy. To be more precise, it is surrounded by it on all sides, so formally you can associate the territory where San Marino is located with Italy. As I said, this is a very small state. The San Marino population is only 34 thousand citizens. What are the names of the inhabitants of San Marino? It is not customary to consider them Italians, though Italian's national language is called "Sammarinese". The capital of San Marino is the eponymous city of San Marino. Tourism in the country has a very large impact on the economy. About three million visitors visit San Marino every year. It is a huge result for such a country and a good reason for you, dear friends, to visit this lovely corner of our planet. More details about other reasons will be discussed later.

1. First republic in the world

The history of the San Marino dates back to September 301 AD. Due to the settlement on these lands of a group of Christians led by Saint Marin, he later founded a church. The oldest document in the archives related to republican activities mentions the abbot of San Marino in 885. By the 12th century, San Marino had become a commune governed by its charters and consuls. The commune was able to remain independent despite the encroachments of neighboring bishops and lords, mainly due to its isolation and mountain fortresses. Later, the republic expanded its legislative structure and was governed by a Grand Council of 60 San Marino people. When. In the eighteenth century, when Napoleon invaded Italy, he respected the republic's independence and even proposed expanding its territory, and at the end of the war recognized its independent status. San Marino on the world map, although it stands out with difficulty, the inhabitants of the republic have always valued freedom and democracy, which contributed to the formation of the founder of this form of government. Fans of historical events will appreciate such a significant fact while traveling here.

The whole area where is San Marino located creates a diverse paradise for lovers of aesthetic beauty and photographers. Unusually fascinating landscapes can be observed in rural areas on the far Apennine mountain range. And if you conquer her height, at the highest point of the country, the hills of Titanium and you can watch the Upper Valley of the Marecchia. Since 2008, the summit of Titano has been added to the UNESCO World Heritage List. In the narrow stone-paved alleys of the city, you can stumble upon magical secret gardens with beautiful fountains and even more Instagrammable views. To see the sunrise in San Marino with your own eyes is a must, and later, between about 8 and 9 am, the sun should be high enough in the sky for the early morning golden hour. The golden morning hour is best for walking, because most tourists and the overwhelming San Marino population are in the city during the day, which means that there are the least people there in the morning.

3. A chance to spend the Days of the Middle Ages

Every July, the republic attracts people to its ancient lands to join the state's centuries-old historical events. All this takes place within the framework of the festival "Days of the Middle Ages". Don't worry, the festival's goal is not to bring back those ruthless times and reduce the San Marino population, but only to simulate the lives of people in the Middle Ages and have a good time in the process. San Marino is very proud of this concept of time travel because it is a great chance to experience the Middle Ages with all the senses and for all this, tourists often visit this festival. In a fairy-tale atmosphere, all entertainment and rituals are brought to life, and key monuments are used as scenes. The festival includes a costume parade, music, crossbow tournaments, flying flags, drummers, and dancers who perform every evening in the main square. So if you are an ardent fan of medieval duels, costumed performances, or if you really want to shoot with a crossbow, then you simply can not miss this festival.

4. The Three Towers of San Marino

The Three Towers of San Marino are a group of towers located on three points of the Monte Titano Mountain, for which the capital of San Marino is famous, their image can be seen on the national flag and on the coat of arms of the country. The Tower of Guaita is the most ancient and famous among them. It was built in the 11th century for the purpose of prison. It was rebuilt several times and reached its current image after the 15th century.  The Chesta Tower is located on the highest point of Monte Titano. The museum in honor of Saint Marin, established in 1956, is located here and displays more than 1,550 weapons dating from the Middle Ages to the present day. It was built in the 12th century over the ruins of an older Roman fort. The Montalais Tower, on the other hand, is located on a low ridge top and is closed to the public. It was constructed in the 14th century to protect against the Malatesta family's growing power in the region. It was also used as a prison, and, accordingly, the only entrance to the tower is a door about seven meters from ground level, which was common for prison architecture of the time.

One of the most important reasons that San Marino on the world map must be noted as a place already visited, is the delicious San Marino cuisine. Eating and enjoying food is a major aspect of the local culture. It is decorated in a Mediterranean style with an emphasis on fresh and local products.  The local San Marino cuisine has a lot in common with the Italian region of Romagna, up to common dishes. This does not mean that they themselves sanmarina their dishes. Among them are "Fagioli in pork" - a soup of beans and bacon and "Pasta e cheche" - chickpea noodles seasoned with rosemary and garlic. The Sammarinese are still well known for their skill in making cheese and pressing olive oil. San Marino has long produced cask-aged red and white wines, which are very delicately selected for the dishes. When the menu includes red meat, they serve brunette or tessano, red wine. If the main course consists of white meat or fish, white varieties of biancale or Roncale are served.

Although it is sometimes difficult to find San Marino on the world map, as in most European countries, several small market stalls are located on the edges of streets, pedestrian paths and the main square. The capital of San Marino is mostly filled with leather market stalls, souvenirs, shoes, fur products, but the main thing is that all this is much cheaper than in Italy. The fact is that these products are not subject to any tax duty, which in turn means that VAT will not be included in the price. This is a huge advantage for the development of San Marino tourism and the overall economic performance of the country. Every visitor can buy everything they need at competitive prices and be satisfied with their choice of clothing and the country to which they decided to go.

7. Do everything in one day

The impressive advantage of traveling to this micro-state, covering an area of only 60 square kilometers, is that it can be easily visited in one day. Even the San Marino population will not prevent you from moving around the republic, as huge traffic jams and crowds of people are not about it. Most tourists take day trips from Bologna to San Marino, and many cruise ship passengers travel from long distances to mark the country on a day trip. And the most important thing is that you will not miss any attraction or restaurant that you like. Every inch of this paradise will be explored by you without any rush, thus guaranteeing a much more relaxing and enjoyable stay.

The most popular entertainment in San Marino is the cable car that leads from the capital itself to the top of the mountain that towers over the city and is home to the original citadel and its associated buildings. The trip will give you very beautiful views of the countryside, the Adriatic coast and the mountain range. The cable car's length is 1.5 kilometers, and the cost of a one-way trip does not exceed 3 euros. And if you remember what the San Marino people are called, then you should remember what they call their favorite cable car - "funivia". So it will be easier for you to get to it and find a common language with the local San Marino population.

Views from the castle villages surrounding the capital of San Marino, you can watch from the hills crowned with beautiful castles. Most of them offer views of the countryside and the top of Titano, and some are able to surprise with their interesting history. Domagnano Montelupo's fortress was founded in the 15th century and became a decisive defensive object in the war of the republic against the Malatesta of Rimini. In the same place is the castle of Faetano. However, the most unusual and beautiful castle can be found in Monteggiardino, a city that was built at least during the Roman era. The castles of Borgo Maggiore and Serravalle, which were formed from rural communes and became important sights of the historical component of San Marino, may seem interesting. It is not surprising why world organizations so appreciate the local attractions, and tourists can not avoid them.

10. Visit the Museum of Philately and Numismatics

For those who love to collect stamps from all over the world, San Marino is a great choice because philatelists who come here will be able to admire the entire collection in this museum, located in the church in Borgo Maggiore. The republic has been producing commemorative series of stamps for many years, which are in demand among collectors and are an important source of income for the state economy of San Marino. In addition to the stamps that have been issued in the republic since the 19th century, San Marino has stood out on the world map with its coins. They have been minted since 1862. Despite the introduction of the euro, San Marino continues to mint a limited series of gold coins, which can be used in circulation as a currency only in San Marino itself. So if among you some want to buy unique items of this activity, hurry up to get tickets.

11. There's nothing to be afraid of

If you have ever considered canceling your appointment due to concerns about your safety, then those concerns can be put on hold here. The crime rate is so low that miniature prisons' complex consisting of a dozen cells has never been filled. The greatest danger you can experience here is only by crossing the street. To reduce any potential danger to vehicles, the community has installed a number of dedicated traffic controllers. These are government employees who ensure that you cross the main street safely. In general, tourists can be sure that their safety is in law enforcement agencies' safe hands. Although with the "friendliest people in Europe" - as San Marino residents are called, the risk is minimized.

Topics
Apply for any visa in two clicks!
Countries
Do you want to get a San Marino visa easily?
Get your visa now 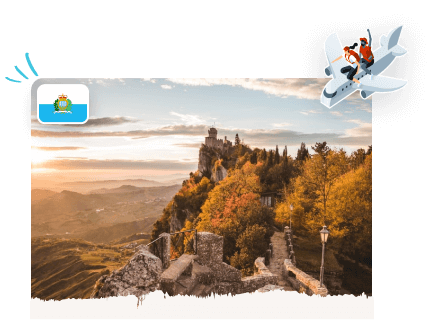