5 reasons why you should travel to Slovakia right now 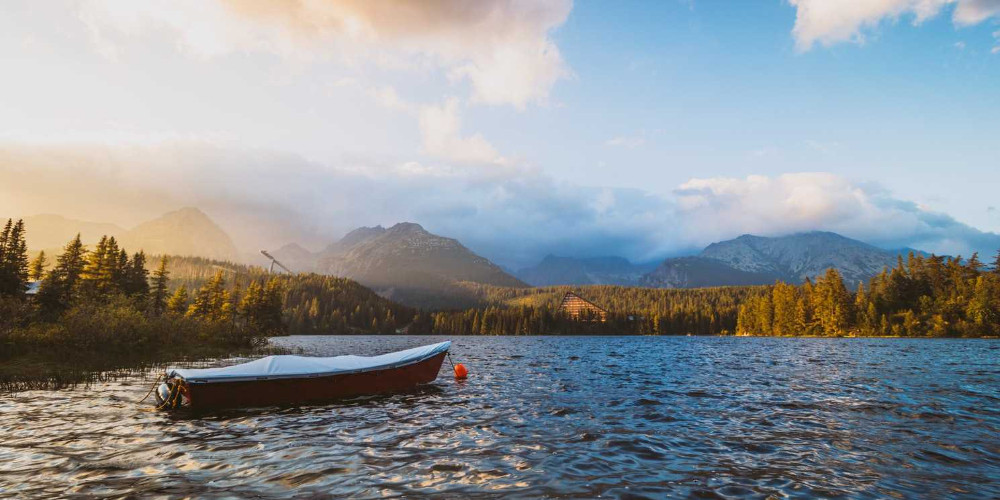 is a country in Central Europe. Where is Slovakia located? The Slovak state is located in the center of Europe and borders with Austria, the Czech Republic, Poland, Ukraine and Hungary. Anyway, Slovakia is a very colourful and small country, and after the collapse of Czechoslovakia, the European country continues to develop rapidly. By the way, Slovakia is fascinating because it is a country of castles, so there is something to see. In this article, we will introduce you to information about the state, the sights, and all Slovak State's subtleties. The capital of Slovakia is Bratislava and attracts tourists with its nightlife, old town and architecture, as well as gardens. And already beyond Bratislava, there are countless villages with the nicest houses, vaguely resembling gingerbread houses. Thanks to these villages, you can see that Slovaks do not forget their roots and traditions, history, and culture. In addition to castles and villages, Slovakia attracts all lovers of European nature.

The climate in Slovakia

is temperate-continental, so when this state is graying in summer, be prepared for the heat, and in winter, prepare for the cold. Sometimes it can be rainy. However, autumn is pronounced here, it is very colorful, and the spring seasons attract with their freshness and delicate flowers.

You can get acquainted with the culture of the country only after you try Slovakia cuisine. Historically, Slovakia was first part of the Austro-Hungarian Empire, and later merged with the Czech Republic to form Czechoslovakia, so Slovak dishes spread throughout Central Europe. In Slovakia cuisine, there are many meat dishes and most often it is pork or poultry, as well as a lot of potatoes, thick sauces and all sorts of cheeses. Rice is also distributed in restaurants in the Slovak Republic. By the way, there are not so many vegetables in every Slovak diet, but at the same time, sauerkraut is served in huge portions. As for breakfast in Slovakia, the menu is not varied and mostly it is bread with butter, ham and cheese. But the main meal of the Slovaks is lunch. Typical lunch in Slovakia is necessarily a soup and a second course and the main course consists of meat, pasta or mashed potatoes and, of course, dessert. The Slovakia people have a couple of favorite drinks, including beer, wine, and the famous Slovak slivovitsa. By the way, Slovaks do not come to visit without a gift bottle of wine or other alcoholic beverage.

3. Sights of the Slovak Republic

Slovakia is unique for its historical sights, or rather ancient castles and fortresses. The oldest fortress in Slovakia is Devin and the building dates back to about 868. The Spish Fortress, which was included in the UNESCO World Heritage List, is one of the world's largest fortifications in terms of its area. Cachtice Castle is a legendary place where once lived the bloody Countess Elizabeth Bathory. If you generalize, then there are about 220 castles throughout the country and more than 420 different historical estates. While studying the history of Slovakia, it is necessary to visit the world's first museum-reserve of folk architecture. It's like a time machine that takes you back in time and shows you all the delights of traditional rural life in Slovakia. The mountain village of Chichmany is located at the foot of the Strazhovsky Mountains and is the world's first museum-reserve dedicated to traditional architecture. The first mention of this unique settlement dates back to 1272. A fabulous oak grove, which few people know about, is located near the village of Dobra Niva in the vicinity of the city of Zvolen. This oak grove is unlikely to have competitors because in an area that exceeds the area of 120 football fields, there are more than 600 mighty and perennial oaks. It's amazing that the trees are just over four hundred years old! Okhta Cave is one of the four aragonite caves in the world. Okhta aragonite Cave is a unique place that attracts tourists from all over the world, as well as scientists.

In the rock structures of Slovakia, people lived for years, when the Apache Indian tribe lived in similar caves only in the summer. These unique residential buildings are carved into the rock and their construction began in the sixteenth century during the Turkish invasions. The purpose of such residential buildings was to protect the population from invaders. Surprisingly, it could take about eight years, or even more, to hollow out a space of the right size and suitable for housing an entire family. Currently, two caves are still inhabited by Slovakia people. Chimes showing astronomical time. In Staraya Bystrica, in the Kisut district, there are the only tower clock of its kind in the whole world. They show the present astronomical time, focusing on the sun.

This is one of the unexplained wonders of nature in the world in the form of stone balls and is not inferior to its counterparts in Costa Rica, as well as in Mexico. The balls can be seen in Kiotskom national reserve. The mystery of the origin of the balls is not disclosed and creates a lot of controversy. The Kremnitsky Mint has been operating for seven centuries. The first coins were minted here in 1328, so the Kremnitsky Mint can be called the world's oldest operating enterprise. Banska Stiavnica is an ancient and charming town that was among the cities of ancient Hungary in the past. Throughout the town, there are taihi-small artificial lakes created to supply water to equipment for mines.

This place is characterized by unspoilt wildlife, which has many species of animals. It is said that there is no wildlife left in Europe, but it is in Slovakia that the Poloniny National Park has been preserved, where you can get away from the hustle and bustle and enjoy the wild European nature. Carnuntum, an ancient city on a cliff that was looking for archaeologists for many years. They say that the ruins found are as much as 200 years older than the Roman Colosseum. The Romans' city of Carnuntum was built 100 years before our era and found its remains in the Bratislava Castle. Carnuntum is the oldest town of the Celtic Kingdom of noricum. The largest cave in the stalactite cave is located in Krasnogorsk. On the Slovak Republic territory, there are more than 7,000 caves and the most famous one is Krasnogorskaya, where one stalagmite is listed in the Guinness Book of Records as the highest sinter column in the world.

It is one of the oldest cities in Slovakia, which is included in the UNESCO World Natural and Cultural Heritage List. It is said to be the most Gothic city in the Slovak Republic. A continuous wall of urban fortification surrounds the city center of Bardejov. The main attraction of the city's central square is the Roman Catholic parish church of St. Egidius, and its construction began as early as the beginning of the 15th century. Now this Gothic basilica consists of a complex of eleven late Gothic casement altars of the fifteenth century. The altars are pieces of wood, consider a unique thread in all of Europe.

And of course, the capital of Slovakia is Bratislava, which is not only a city with a history but also a city with an interesting present. Bratislava used to be Hungary's capital for several centuries, but now it is the center of the region, which is rapidly developing in all directions. The city is located on two banks of the Danube at the Lesser Carpathians mountain system's foot. The pearl of the capital is definitely Bratislava Castle, where everyone can plunge into the history of Slovakia and explore part of the old Slovakia. Also, in Bratislava there is an Old Place where it is fashionable to walk through small, cozy streets and enjoy a special atmosphere. By the way, Bratislava was the place of coronation of all Hungarian queens and kings. Slovakia is the center of Europe where you can enjoy the natural scenery, the historical past of not only the whole country, but also the whole of Europe. This is the country where many historical sites and monuments and natural locations included in the UNESCO World Natural and Cultural Heritage List have been preserved. Despite the fact that this is a fairly small country, there is not enough time for a week to explore all the historical and natural places. Tourists come here from all over the world, because it is here that you can plunge into the history of ancient Hungary and Slovakia as a whole. Despite its extensive history, Bratislava, the capital of Slovakia, is one of the youngest capitals in the world.

Tourists in Slovakia are attracted by the comfort of small towns, modern shopping centers, the delights and skills of Slovak brewers and chefs, many international cultural and sports events, various exhibitions of artists and masters of various crafts, friendly Slovakia people and, of course, the historical charm of each Slovak town, the culture and traditions of the Slovakia people. Large elevation differences characterize Slovakia and most of Central and Northern Slovakia is occupied by mountains where the Carpathian Arc passes. However, the southern and Eastern parts of the country are dominated by lowlands. The most full-flowing and important river for the Slovak Republic is the Danube, which connects Bratislava with Budapest and Vienna's two major European cities. By the way, the Danube is also an important river for agriculture. There are 138 cities in Slovakia and each of them has its own cultural history. Moreover, each city tells about the history of Slovakia, including many monuments and castles. Each city is rapidly developing and there are more and more recreation areas, museums and galleries. Slovakia is not a country that everyone has visited, but it is this republic that is worth the attention of every traveller because here you can find many secrets and secrets, study the legends in every village and village. Each region here has its own cultural traditions and folklore, which the residents will be happy to show you. Slovakia is also a country of sharp contrasts. In just a couple of hours, you can get from the Danube Lowlands to the Central European highlands, from wild and bubbling river rapids to quiet water areas, as well as from living cities to mountain farms and quiet villages. In addition to a calm and measured rest at the thermal springs, where you can improve your health, you can also engage in active sports, such as mountaineering or rafting in the Slovak Republic. Also here you can do high-altitude tourism, which will interest every mountain lover. Moreover, in Slovakia, cycling tourism is developed, for which as many as 10 thousand kilometers of bicycle trails are laid. Travel to Slovakia, learn the history and enjoy the unique atmosphere!

Topics
Apply for any visa in two clicks!
Countries
Do you want to get a Slovakia visa easily?
Get your visa now 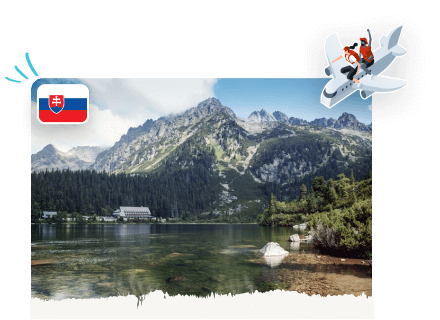