10 things I wish I knew before going to Djibouti 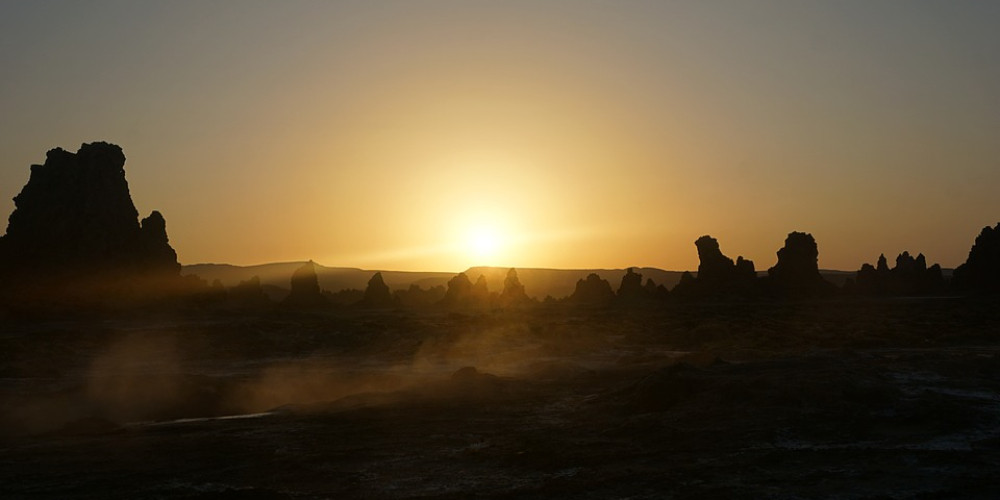 The Republic of Djibouti, affectionately called "Djibeauty" by English-speaking tourists, is one of the most poorly studied African countries. Preternaturally gloomy landscapes exist here in harmony with the fascinating beauty of the underwater world. The capital of Djibouti is striking in its ambiguity. The fact that the state is located on the Horn of Africa territory raises great doubts about its visit's rationality. Where is Djibouti, who lives here, and why is it worth coming here? 10 facts you need to know before you travel – no doubts!

The weather in Djibouti

Dry, sultry, desert-the characteristic features of the tropical climate are revealed in Djibouti in all its glory. It is hottest here from May to September, and in January, the average temperature reaches 25 degrees. The weather in Djibouti, however, has a nice bonus. Thanks to the ubiquitous gusts of wind in the daytime, you are unlikely to be pestered by bloodthirsty mosquitoes. The night is another matter. Bring as much anti-mosquito solution as you can and a dozen insect-catching nets. Treat all clothing and other surfaces with repellent to ensure a restful sleep. How did this country earn its growing popularity among tourists?

are rare but worthy of your close attention. Completely tiny, the country is barely as big as Macedonia. Moreover, after looking at the map, you hardly include Djibouti's port in your to-do list. To the south, the state borders an enclave of Somali pirates. In the north-with, one of the poorest countries in the world is called Eritrea. In the west – with Ethiopia, whose reputation is tarnished by rumours of a new wave of universal famine and a diabolical drought. In the east, the country is separated from war-torn Yemen by the Gulf of Aden's waters. Plotting a route to the land where is Djibouti located is quite a challenge. Is it worth trying? It is almost impossible to find a direct flight to Djibouti, and it is quite resource-intensive to plan a tolerable flight (always with many transfers). It's not necessary to look for easy ways, but it's worth it! Salty volcanic lakes, "underwater" plains below sea level, rocky canyons, limestone columns shrouded in sulfur vapour. Here are the myriad treasures of Her Majesty Nature that the world has yet to learn about. Let's dive into other details that will make you apply for a Djibouti visa.

Being a mostly Muslim state, Djibouti is a reasonably conservative country that expects its tourists to submit to centuries-old Djibouti traditions. Give preference to low-key outfits and try to calmly perceive everything around you without showing your embarrassment, especially if you are travelling in the countryside. To all sorts of emotional manifestations, respectively, the attitude here is also very cold. Hugs, kisses, flirtations, exclamations of happiness, and even a bright desire to share your good mood with everyone are not warmly welcomed here. In the territory where is Djibouti located, it is allowed to chew the cat plant's leaves, which is known for its narcotic properties. It is impossible to export it, as well as alcohol. Moreover, although chewing laughing grass and drinking drinks with different alcohol content is legal, demonstrating it in public places is prohibited and entails two-year detention. So know the measure. Some more useful tourist information about the laws: photo and video shooting of infrastructure facilities here is strictly prohibited. If the "criminal" is caught, the latter is threatened with arrest and confiscation of all the equipment involved. Important! Djibouti's port is one of the few places in the entire state where you can withdraw money from a bank card. Almost the whole economy here is built on cash turnover, so non-cash payment is not in favour. On the contrary, you can exchange currency directly on the street. However, you need to be careful – there are a lot of hunters around for easy money.

3. Confirmation of your good tourist intentions

As soon as you step off the plane and get to the customs office, representatives of the Republic will check all your documents. At a minimum, have a return ticket and documents confirming the hotel room's reservation with you. If possible, ask the guide to pick you up – he will be able to settle some issues with the customs officers on your behalf. Since the Republic of Djibouti is not yet the most popular destination in the tourist ratings, the local law enforcement officers are quite sceptical about the tourists who have overcome thousands of kilometres of distances, who came for the sake of another familiarization tour. That is why the airport's migration service staff is unlikely to be happy to know that you have arrived for a few days or a week or two for fun. To make it more convincing, bring as many bright tourist clothes as possible. If you can, stay in Djibouti for a more extended period, grab your friend. The more harmless he looks, the better: an athletic young man will only add fuel to the fire of suspicion. In any case, you should not argue with the official representatives of the state when crossing the border, of course. Honesty is your main weapon.

4. Ethnic diversity and the language barrier

Representatives of one of the Republic's two main tribes – the Afar are settled in the northern part of it. They speak only their Djibouti language, follow all the established Djibouti traditions, and have a blood connection with Ethiopian tribes. Control of the southern part of Djibouti is in the hands of the Issa, whose territories border Somalia's lands. Despite the desire for nomadism, the representatives of this tribe make up most of the population of the capital of Djibouti. Feel more or less at ease, bring a Russian-French phrasebook or refresh your remaining knowledge of francais from school. If you are a tabula rasa here, start preparing for your journey in advance. Learn to read, learn the most basic expressions-arrange yourself an immersion in the language environment a couple of weeks before departure to your travel destination.

Despite the possibility of a language barrier, do not be afraid to start a conversation with the locals anywhere. So the secrets of life in Djibouti and the local Djibouti traditions will become clear as an open book. The chefs will be happy to show you how their equipment works (it is noticeably different from what we are used to!). Merchants will be glad to present their best products, let you try them all, and pose for the camera. Even if you meet a tramp in the desert, you will hear a detailed and enthusiastic story about where he is going, what he lives, and what is in his bag. There are no threats, no pride, no security concerns, and no invasion of personal space. The weather in Djibouti is hot – and this is not about the climatic conditions.

Although Djibouti is not the most dangerous territory on Africa's map, it is better to refrain from travelling by public transport here. Despite receiving the status of "safe from mines", the local land still holds many unpleasant surprises in its depths. Of course, this is a cause for concern when planning a trip, but not a reason to give up the chance to personally see the port of Djibouti, get acquainted with all the beauty of the country, and feel the unique atmosphere of the African continent. Just stick to the main rule: asphalt is the guarantee of your safety. The roads here, however, leave much to be desired. Narrow, poorly lit, and pitted with holes, they are like a pasture covered with a thick carpet of grass, attracting livestock to the promenade. Road trips at night are not recommended here. However, the good news is that you are ready to help and almost give your car to the first comer in the event of a breakdown. What to do in Djibouti if the spirit of adventurism is stronger than any prohibitions and risks? Then, before you go to any God-forsaken place (you can't count them here!), check with the local authorities whether the route is safe on the dirt roads you have chosen. Women-everywhere, always and in everything… Is it?

Booking tours to Djibouti for yourself and, for example, your girlfriend, upon arrival, you risk becoming overwhelmed by the male beauty that seeps through the walls here. Small units of the German, Spanish and Swedish armies deployed their headquarters in large international Djibouti hotels. Talk to enthusiastic tourists (tourist – even better!) for them – a rarity, so do not hesitate to approach and start a simple conversation. They will tell you not only about Djibouti but also about their home countries-entertaining and exciting.

8. The capital of Djibouti

Djibouti appeared on the map of its namesake country in 1888 from the light hand of the French. In the future, the Djibouti capital became one of the most important coastal cities, and the local port became the main point of the shipping line passing by. Once off the deck, you can get to Ethiopia by land from here! Of course, the capital of Djibouti is interesting not only as a centre of international maritime trade. For the curious tourist here is prepared a lot of exciting things! In the Rue de Bender store, you can buy a couple of meters of unique fabrics. The outfit, the basis for which they will serve, will attract only admiring glances anywhere in the world. The Mosque of Al-Hamoudi (Mosquee Al-Hamoudi), whose history began in 1906, attracts its unique grandeur and architectural charm. Where without the shadow of colonial France? The old houses are more like ruins but still worthy of your close attention.

Yes, yes! Even though the tourism sector in Djibouti today, like a helpless baby, needs support and thorough "education", the opportunities for access to the ocean depths, water surfaces and wild sands are not limited here. If Djibouti capital is not a contender for the title of the city of your heart, head west. 50 kilometres away, 155 meters below sea level, lies an incredible salt "puddle" called Assal. The lake is unsuitable for amateur underwater exploration or even refreshing backstroke swimming. Charm, however, this area does not occupy. The nearby East African Rift Valley is a great opportunity to capture the fascinating scenery on film. Do you dream of diving into the depths with scuba diving, but tours in Djibouti, it seems, can not guarantee you the fulfilment of this dream? Nonsense! Although Djibouti's coastline is far from a resort ideal, in some places, the hot waves of the Red Sea have managed to create excellent conditions for diving. Diving into the deep waters, you are very likely to meet whale sharks that "walk" here from October to February. They are friendly, but you should not lose your vigilance!

High rocky lands-a desirable ideal for extreme tourism. Djibouti is most often associated with deserts full of quicksand and quiet plains at zero altitudes on the world map. A trip here will help you break this boring stereotype. The Ardoukoba volcano, which has been in a deep sleep since 1978, rises 300 meters above sea level. Today, it and Lake Assal, which stretches majestically in the neighbourhood – are a step away from being included in the coveted list of UNESCO World Cultural and Natural Heritage. Goda Mountains are a worthy rebuttal to any attacks on the deceptive mediocrity of Djibouti's relief and the lack of special flora here. Rising to a height of 1,750 meters, they are carefully shrouded in the foliage of trees, which were enough to establish the Foret du Day National Park, also known as Day Forest. Solitary hiking under the lush crowns of powerful junipers, when the ringing voice can only break the silence of the turacha-a representative of one of the species of birds of the pheasant family that live only in the Horn of Africa.

Topics
Apply for any visa in two clicks!
Countries
Do you want to get a Djibouti visa easily?
Get your visa now 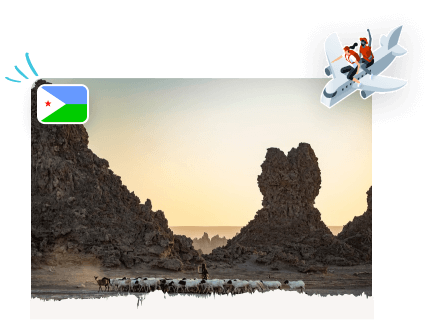