10 things I wish I knew before going to Greenland

This time we are packing our things and going to Greenland, the largest island on Earth. It is home to glaciers sparkling in different shades, colours of blue and a vast ice cap spanning about 80 per cent of the mega-island. Over the past decade, Greenland is slowly but surely beginning to become a popular location for adventurous travellers. Greenland accepted over 80,000 overseas visitors in 2016, not counting travellers on cruises, making a short stop here. This might be a low amount relative to other nations. In this article, I will be sharing with you 10 things everyone should pay attention to before going to Greenland.

According to Google, one of the most searched questions about the island include "where is Greenland". Greenland is situated northeast of Canada and northwest of Iceland between the Arctic Ocean and the North Atlantic Ocean. The territories include not only Greenland's island, which, as we have mentioned above, is the world's largest island, but also more than a hundred other smaller islands. As an island, Greenland has no land borders, with a coastline of 44,087 miles. Now that we know where the land is, another question we face is how we can travel to Greenland? As Greenland does not have any roads or trains with other countries or even between the cities located there, you might want to travel straight to the city you want to discover. Unfortunately, there are no direct flight between North America and Greenland; however, the easiest alternative for travellers would be transit flights via Reykjavik, the capital city of Iceland.

2. Which country does the island belong to?

Alongside "where is Greenland?", "who owns Greenland?" is another very common question. Greenland is a sovereign region within the Danish Kingdom. While geographically being a member of the North American "World" for more than a century, the island has been historically and culturally aligned with Europe, being more exact, specifically with Norway and Denmark. The influence of a European Union member neighbouring island - Iceland, also cannot be denied. The largest part of its inhabitants is Inuit, whose descendants came from Alaska and settled on the island in the 13th century. So, who owns Greenland? Denmark! As Scandinavian country contributes two-thirds of Greenland's whole budget revenue, while the rest is mainly provided from fishing.

3. Best time to travel to Greenland

A lot of people would say that the best time to travel to Greenland is in summer as the climate is milder and it is likely to rain or snow. Personally, I would not agree with that opinion. I believe that it really does depend on what you are looking for. Travelling to Greenland in summer means you are automatically losing your opportunity to get to see the northern lights or try dogsledding activities. But looking at the bright side, the days are far longer and definitely more vivid, which will assure that you will get to experience more of the island. As you can see, it is very hard to say what is exactly the best time to travel to Greenland and I believe you should pick the time according to your trip's plan. So, one of the best things about Greenland is its weather that can please any visitor.

4. Nuuk, the capital of the island

While going to Greenland, there is no way that you will miss Nuuk. Being the capital, the city is also the most visited spot on the island. The city is especially known for its great infrastructure, including great cafes and restaurants compared to other cities in Greenland. A favourite activity of tourists visiting Greenland is to walk around the Old Colonial Harbour. The city's establishment is densely linked to this harbour; interestingly enough, the colonial harbour is Nuuk's oldest part. In 1721, a Danish missionary Hans Egede landed and settled here, and this was where the person who established Nuuk. He established the city as a trading post; from that moment, it started to prosper and gradually became Greenland's administrative capital and government seat. Egede 's building still stands today amid dozens of other bright high-roofed Scandinavian homes, right on the waterfront. However, as it is used by the Greenland government to hold official occasions, the house is not open to the public, but it is not the only interesting location at the harbour.

Travel to the Greenland National Museum just behind the Old Colonial Harbour to discover great and very interesting facts about the history of Greenland. The largest museum of cultural history in Greenland brings together historical artefacts and photographs from all around the world, so in case if you won't have time to travel all over the island during your trip, you can get an idea about the rest of the island simply by visiting this museum. Greenland National Museum has exhibits documenting a large part of Greenland's history over the course of 4,500 years: from the first Arctic Stone Age civilizations, the Norse colonies, to the emergence of Thule culture.

is the most visited region of Greenland, and since 2004 has become a UNESCO World Heritage Site, this spectacular berg-strewn part of the coast in Disko Bay is where massive icebergs fall off the glaciers and drift out into the waterways. Icebergs that are falling from the glaciers sometimes can be way too large, being precise, up to a kilometre in height - that they're too tall to flow down the fjord and stay frozen on the bottom of its shallower regions, often for years, until they're broken up by the impact of the glacier and icebergs farther up the fjord. Interestingly enough, usually, bigger icebergs don't sink until they reach 40-45 degrees north - more south than the United Kingdom, and equal with New York City.

The country's harsh climate strictly restricts the variety of food resources available; however, Greenlandic cuisine has a lot more to offer to visitors than you can imagine. I will not make a mistake if I say that one of the good things about Greenland is its fresh seafood and wild animals and plants. The first thing you should not skip at all cost is lamb. All of Greenland's lamb come from farms that surround South Greenland, and as you bite into its juicy meat – ideally flavoured with rosemary and Arctic thyme and then slow-roasted – you taste a delicacy of its own. Secondly, reindeer has become a sign of the country's culinary. It is even a favourite in Greenlandic homes as both men and women go in the autumn on private reindeer hunting trips to cook various dishes from it. However, you still can order it in the majority of restaurants and dive into Greenlandic cuisine like never before.

Footprints of Erik the Red's thousand-year-old Norse colonies is one of the best things about Greenland as place puts you several steps closer to the history of Greenland and build a better understanding of the island. It is claimed that 5.000 of these men inhabited there during their peak. It still unknown why settlements had died out. A tour to the ruin sites is an interesting trip back in time into those hardy hunter-gatherers' lives. There are many Viking ruins found in the city, including the Church of the Hvalsey Fjord. In short, if you are into history, this place is a must-visit during your travel to Greenland.

Greenland boasts of having safe and wild animals in its waters so that the whales of the island can swim easily anywhere the krill and fish schools take them. That said, certain animals prefer other fjords making certain locations along the coast of Greenland safe whale watching havens. One of the best things to do in Greenland for tourists is to have a close brush with whales. Most fjords are disappearing by summer, and June and July are typically the best months for iceberg fishing and whale watching along the stunning coastline. Tours typically depart from larger cities such as Qeqertarsuaq, Nuuk, and Aasiaat. I would strongly encourage you to head to the south of the island, where there is literally more water in the vast fjord system than land, fin and minke whales (which are the two common types of whales) in particular love to play in. Sailing is popular as daily travel, and even a fast hop between towns and villages is an opportunity to see the whales, which means you don't really need to put a lot of effort or have a hard time looking for whales.

Topics
Apply for any visa in two clicks!
Islands
Do you want to get a Greenland visa easily?
Get your visa now 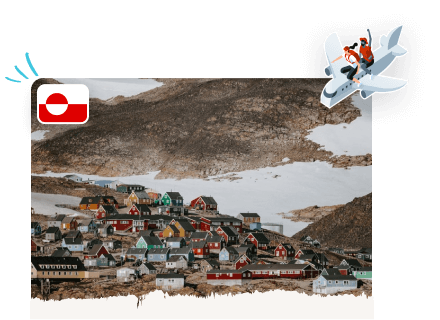