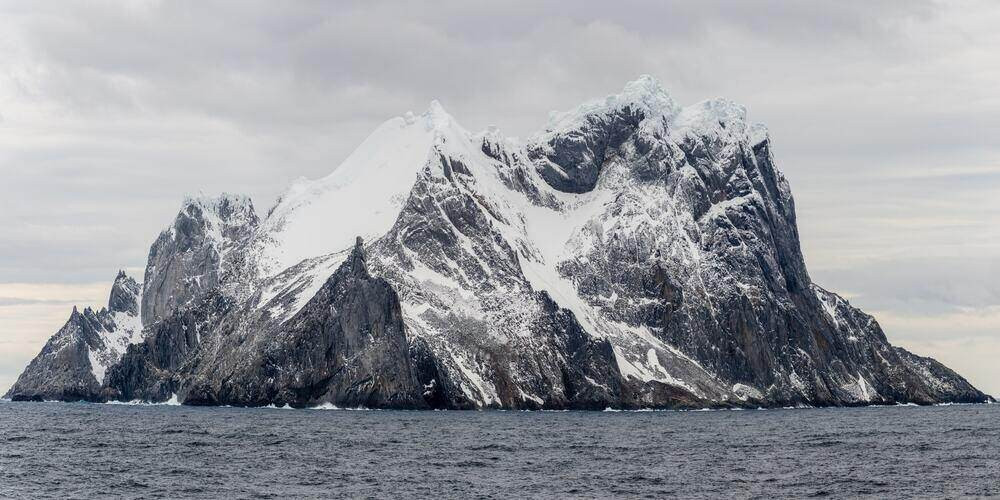 1. Where is South Georgia and the South Sandwich Islands?

South Georgia and the South Sandwich Islands are located in the southern Atlantic Ocean. It is a British overseas territory claimed by Argentina. It includes the island of South Georgia and the neighbouring islets and the archipelago of the South Sandwich Islands. It is currently administered from the Folkland Islands in the north-west of the territory. The main island is South Georgia Island. It is surrounded by Pickersgill, Welcome, and Willis Islands and Annenkov Island, Bird Island, and Cooper Island. It is also surrounded by rocky islands such as Clerke Rocks, Shag Rocks, and Black Rock. The South Sandwich Islands include the Traversal Islands, the Candlemas Islands, the Saunders Islands, Montagu Island, Bristol Island, and finally to the south with the island Bellingshausen, Cook, and Thule. The mountainous and rugged relief and the ice that often covers the ground, make these islands largely uninhabited. Eleven peaks of the island of South Georgia even exceed 2000 m. The highest point is Mount Paget, with 2934 m. The island is 160 km long and 30 km wide, with 3,756 km², on which are distributed more than 160 glaciers, some ending their course in the sea. Some of the South Sandwich Islands are of volcanic origin. There are even still active volcanoes there.

2. How to travel to South Georgia and the South Sandwich Islands?

The remote location of South Georgia and the South Sandwich Islands and its lack of infrastructure prevents it from being a permanent residence territory. Typically around 30 people live on the island at any given time, most of them for scientific research. In the summer, when more research is done, that number increases to around 40. Besides the research, a few people work on the island's only museum, and a UK government official is also on hand to carry out official activities there. The rotation takes place every few years. The lack of permanent inhabitants may also be due to the lack of arable land in South Georgia. The island is covered in snow and ice for most of the year, and almost all of the terrain is steep and rocky, made up mostly of mountains and glaciers. Vegetation appears in summer but is limited to a few species of grasses and mosses.

4. How is South Georgia and the South Sandwich Islands weather?

The south coast is exposed to westerly winds, which explains the colder climate, storms, and a rather unpleasant climate. Mountains protect the north coast. The climate is, therefore, milder. There are even fairly quiet greens there. In tundra, the vegetation consists of grass, moss, shrubs, lichens, sedges, and a few scattered trees. Annual average temperatures in south Georgia range from -1 ° C (minimum) to 5 ° C (maximum). The annual precipitation is 1000 mm. So make sure you do not forget your raincoat.

5. The capital of South Georgia and the South Sandwich Islands

The capital of South Georgia and the South Sandwich Islands is Grytviken. Although Grytviken appears to have a Scandinavian name, it is a British Overseas Territory, part of South Georgia and the South Sandwich Islands. Grytviken was founded by a Norwegian sea captain Carl Anton Larsen, who established a whaling station in 1904, with some sixty compatriots. Whalers extracted oil from fat, meat, and viscera, while bones and meat were used for animal feed and fertilizer. They also hunted elephant seals. The settlement of Grytviken is located on the isolated island of South Georgia, near an idyllic harbour. The colony, which housed around 500 men and their families, is seasonally abandoned. There remains only a cinema, a church, a museum, and a cemetery. The serene and unspoiled atmosphere is perfect for those who wish to avoid the crowds.

Since its discovery, the land is an inexhaustible source of dreams for frequent travellers. Icebergs can sometimes pass very close to the island. Sometimes this can cause dangers for the ship. If you are fortunate, you can see these beautiful icebergs during your trip.

7. What to do on South Georgia and the South Sandwich Islands?

Among other local activities, hiking is a prime attraction for visitors to the islands. Crossing the territory of South Georgia and the South Sandwich Islands is difficult but rewarding. You can retrace the footsteps of Sir Ernest Shackleton himself through glaciers and black sand beaches. If you are lucky, you might even see penguins and elephant seals along the way. Also, you can explore the unique beauty and wildlife. Its rich history of exploration and whaling provides an excellent backdrop to its rugged landscape with glaciers and bustling wildlife. This region is often described as the wonder of the Southern Ocean, and it is also a prime location for wildlife photographers. South Georgia and the South Sandwich Islands' unique position in the Antarctic ecosystem, beyond the limit of permanent sea ice, makes it a welcoming land for millions of breeding penguins, seals, and seabirds. Weather permitting, you can discover Fortuna Bay and some abandoned whaling resorts. During your stay here, you will see elephant seals basking on the sand, baby fur seals continually having fun rushing into and out of the water, albatrosses hovering above your heads, and sea lions.

Although the islands do not have any endemic species of terrestrial mammals, some animals have been introduced by humans to the archipelago. The reindeer is the most majestic example. In the 20th century, several deer were indeed released on the north coast of South Georgia to begin the creation of a herd, which was to be a source of fresh meat for the whaling fishermen living there. The shutdown of this industry and the departure of the men led to a demographic explosion of the reindeer population on the island. Until recently, around 2,500 of these animals lived in South Georgia, causing great damage to the ecosystem. This is why an eradication policy was undertaken, leading to the elimination of 1,900 reindeer.

There are king penguins by the thousands. You will admire the view of cliffs and hanging glaciers, lagoons with a large colony of king penguins. At the edge of St. Andrews Bay on the north coast of South Georgia, these tens of thousands of birds gathered together to form a mass so compact that it is difficult to distinguish them from one another. An unspeakable crowd, as noisy as it smells, and a moment that is both moving and unforgettable. The social organization of the king penguins is astonishing: the parents raise their young in pairs, in turn, one watching the chick while the other goes fishing. Then, when the colony's hatchlings begin to require more food, the adults gather them in a large nursery before heading out to fish—standing side by side.

The South Georgia Museum, opened in 1991, was previously a villa that Whaling Station Manager Grytviken occupied until it closed in 1965. Originally devoted exclusively to whaling, the museum now has exhibits on other topics, such as the seal hunting industry and the Falklands War, among others. The museum also hosts an artist-in-residence program, which allows artists to perfect their art in peace. The name Grytviken, which in Swedish means "the bay of pots," comes from the Swedish explorer Johan Gunnar Andersson, who found there ancient pots used by the English to transport seal fat. One of these jars is kept at the South Georgia Museum.

Topics
Apply for any visa in two clicks!
Islands
Do you want to get a South Georgia and the South Sandwich visa easily?
Get your visa now 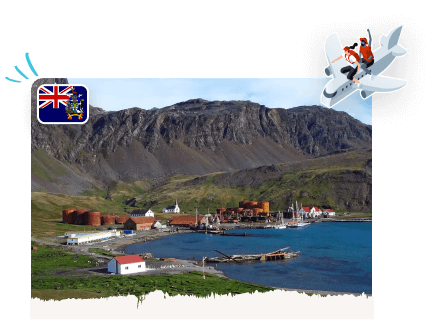