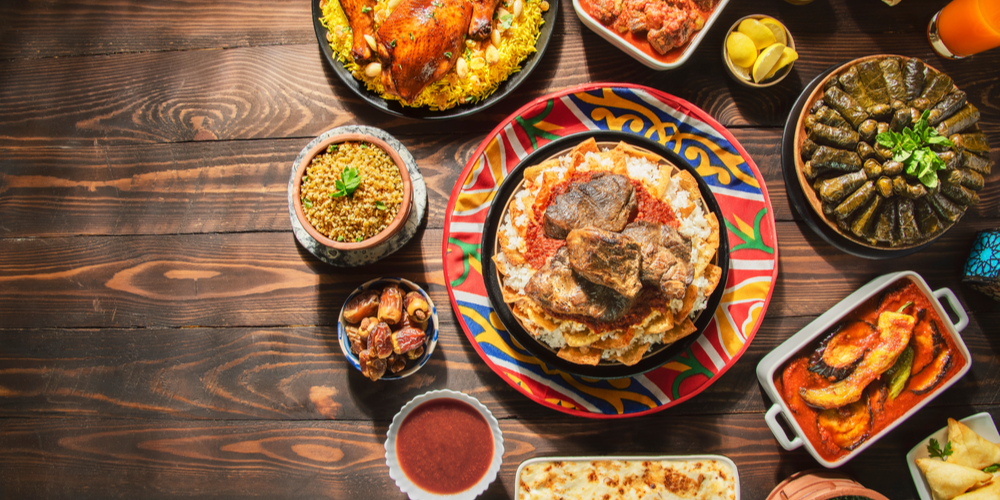 Have you ever wondered what is traditional Egyptian food? Well, now that you will travel to Egypt; you will have the big opportunity to discover it but first, you need to apply for the Egypt visa and for that, you just need to visit the ‘Services’ section of this site. Add your country of origin and the country you plan to visit, in this case, Egypt. In case you want to know in detail which countries need a visa, visit the ‘Services’ section. Now, is time to discover Egyptian cuisine history.

What is the Egyptian cuisine history?

Through the hieroglyphs of the ancient Egyptian ruins, it has been possible to determine what the palates of these ancient lands enjoyed.

According to these engravings, ancient Egyptian food such as bread was a fundamental part of the diet, along with legumes. Other vegetables, such as garlic, onion, cucumber, lettuce and leek, were important in the cuisine of this region.

As for meats, the most used were lamb, pork and domestic poultry, almost always roasted. The beef was a complete luxury, worthy of the great festivities of the pharaohs, this because the work of cattle was appreciated more than its use as food. As for the fish, the mujol fish, a species found throughout the length of the Nile, was consumed for mystical reasons. However, eating it was unusual because it was believed to be the reincarnation of the god Seth.

Undoubtedly, the gastronomy of the land of the pyramids carries with it a great history, full of variations and influences that culminated in a cuisine that is one of the most interesting attractions of that country.

What is traditional Egyptian food?

It is good to highlight that if you travel to Egypt, you will not find recipes with pork due to the country’s religion.

Some locals, consider this dish as the national food. It is widely served in restaurants in that country and in the Middle East.

It consists of rice, lentils, chickpeas, caramelized onion and macaroni covered in garlic and vinegar. Everything is mixed with a spicy tomato sauce and it is a great option for vegetarians although you can find it also with meat.

It is considered one of the famous Egyptian cuisine recipes of the region. It is cooked over a low heat and obligatorily in a copper pot which provides it with the desired characteristic flavor.

Its name comes from the Egyptian "ful", which means "bean", and from the Coptic "medames", that is, "buried", which would give us certain clues about the cooking process in past times.

Custom dictates that just before being served at the table, it must be seasoned with a mixture made with garlic and olive oil. Then, you should also add a certain amount of chopped parsley, several onions and a little lemon juice. Within Egyptian gastronomy itself, it is something very typical to accompany this dish with a variety of pita bread called shami.

If you were wondering what is typical Egyptian cuisine, here is another option. The dish consists of a series of leaves of a highly recognized fruit in the region called jute and has a bitter taste that softens when cooked, for this reason it is usually served in soups or stew.

Jute is a green leafy vegetable that, in addition to flavoring this delicious soup, makes it a little thicker. The dish will be accompanied by white rice or meat, either chicken or lamb. It is a delicious and very healthy dish, in addition to being full of nutrients, so you will be satisfied and ready to travel to this fascinating country.

This is usually the first option for lunch. This ancient Egyptian food is made with lamb, rice and a dry yoghurt called jameed.

The lamb is cooked for a time in the yogurt itself and the rice is cooked separately in the water while it turns yellow due to the use of turmeric. The three ingredients of the Mansaf are served with thin bread called Markook or Shrak bread that is placed in the bottom of the dish. The rice covers the bread and the meat is put on the rice.

The yogurt sauce (jameed) is poured according to your taste on the same plate.

The Egyptian cuisine traditions are distinguished by their delicious mix of spices, ingredients and one-of-a-kind cooking techniques, which serve the function of harmonizing food and soul. Baba ganoush is precisely a dish that, in addition to being delicious, has one or another unique power. It is known that the mixture of various spices can become aphrodisiac. That is why this dish is so peculiar in the typical food of Egypt.

It has a lot of similarities to hummus because of the use of tahini. Baba ganoush is also a vegetable paste that is used as a snack. The traditional ingredients are roasted eggplant, garlic, tahini, lemon, and pomegranate.

What is typical Egyptian cuisine? Fatteh is a classic dish of typical Egyptian food. It usually consists of pieces of bread that are toasted or fried, either dry or fresh, and then covered with other ingredients. The name is derived from the Arabic word fatteh which means "crushed crumbs." In the fatte there are no rules, indeed, each home makes its fatteh different, each with its unique touch depending on your personal preferences.

The best thing about fatteh is the fact that it can be eaten for breakfast, lunch, or dinner, depending on the ingredients you put in it. Fatteh can also be vegetarian, made essentially with chickpeas or eggplants.

The word kofta is Persian and means "minced." This name designates several typical dishes of Arab origin that are shaped like meatballs or hamburgers. In Egypt, the typical way to prepare kofta is kebab, i. e., rolled up. This type is also known as kabab mashwi. Generally, it is made up of beef and lamb. In cities like Cairo you can find it on every street as part of the royal Egyptian cuisine.

So, do you have an Egypt visa? The popular kofta is waiting for you! It can be mixed with spices and pre-sautéed onions. Of course, there is the possibility of adding rice, vegetables or egg to achieve a proper roast and prevent it from falling apart.

The origin of falafel dates back to biblical times which means that it is an ancient Egyptian food. It is a dish that is being made in more and more countries around the world, and can be found in almost the entire planet (although not all of them taste like the original Egyptian cuisine recipes), as well as representing a very good option for vegetarians.

Egypt's traditional falafel is made with beans, chickpeas, or a mixture of both. What differentiates this meatball from others is that neither the beans nor the chickpeas are cooked; they are simply soaked the night before. Then they are processed together with parsley, coriander, onion, garlic and spices until they form a dough which is then formed into balls and fried.

Interestingly, the word falafel, which comes from the Arabic word filfil, means "pepper." The falafel that has finally triumphed the most is the one made only with chickpeas, both in the Middle East and in the countries where this dish has been introduced, served on pita bread, accompanied by tahina (sesame sauce), hummus (cream chickpea) and variety of salad. It has been also considered as a royal Egyptian cuisine.

The malfuf mahshi or cabbage rolls are part of the Egyptian cuisine traditions that has many types of variants and that constitute a perfect starter. The main ingredient in this recipe is cabbage, which adds a rich flavor to the entire dish. It is a recipe with which you will be pleasantly surprised by Egypt and its incredible gastronomy.

The filling, in general, has the soul of baharat, which is a mixture of spices used in Arab cuisine, in the Mediterranean Levant, Lebanon, Syria, Iraq, Israel or Turkey and depending on the areas, it contains less or more spices. There are mixes that include six or seven spices and others that incorporate up to ten! So if someone asks you what is traditional Egyptian food then, tell them about mahshi!

Baklava is a cake made with a crushed walnut paste (or other nuts), bathed in syrup or honey. To know what is typical Egyptian cuisine is necessary to explore the history behind it. The history of the baklava dates back to ancient Mesopotamia cooking the bread in ovens made of wood. This cake was historically considered a royal Egyptian cuisine until the mid-19th century.

The typical food of Egypt is a feast for your senses. Feel free to experiment with flavors when you travel to Egypt and immerse yourself in its culture, food and history after applying for Egypt visa. We wish you a happy journey!

Topics
Apply for any visa in two clicks!
Food, Hotel, Restaurant
Do you want to get an Egypt visa easily?
Get your visa now 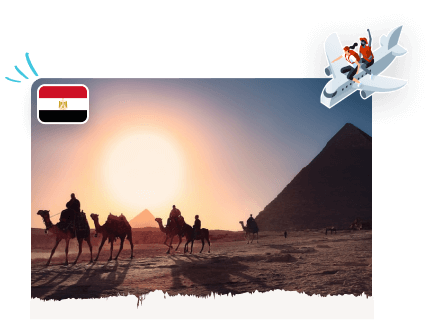