There is no doubt that one of the most beautiful countries you can visit in the world is Russia, which has the largest surface area. Especially Moscow and cities like St. Petersburg are places worth visiting.

So what do we need to know to travel to Russia? First of all, it is useful to know the visa procedure before traveling to this country. For touristic travel, some of the nationals must have a Russian tourist visa. So they can stay in Russia for a maximum of one month as a tourist, as this visa type is valid for 30 days. A Russian visa is an important key for travel.

In general, you have to obtain a short-term visa to Russia. This visa allows you to travel the country and for a short-term job interview, attend conferences, and benefit from medical treatment. However, you can still stay here, provided that it does not exceed 30 days. When you get a tourist visa to Russia, you also have the right to use a "double-entry visa". When we say double-entry visa, we mean that you have the right to visit neighboring countries after traveling to Russia. When you travel using this right, the itinerary must be shown on the tourist ticket.

To travel to Russia, you need to obtain the necessary documents and apply for a visa. To obtain a Russian tourist visa, you must submit the following documents:

If you want to apply for a visa to travel to Russia, you can visit our official website to get information about the visa.

What is Russian food?/What food do they eat in Russia?

Russian food culture has a historical past with its richness and colorfulness. When you are in Moscow on vacation or a business trip, don't miss the chance to taste delicious Russian cuisine. Russian cuisine is original and unique. Like any other national cuisine, it was formed under the influence of various social, geographical, economic, and historical factors. It may seem that Russian cuisine does not have much to offer, and the idea that we often get is that it is heavy and greasy cuisine. We are talking about a tasty cuisine that can preserve pleasant surprises. Before going to Russia, we should look for an answer to the question of what is Russian food.

Among the main dishes, we can include soups, of which there are many different types and seasoned with many spices and beef and fish from the Baltic Sea. The strong point of the Muscovite tradition and Russia, in general, are the liqueurs, primarily vodka, which you certainly cannot fail to taste. Russian food recipes make a difference. You can search for Russian food recipes from different places.

Russian food culture is very rich. Talking about the features of Russian cuisine, we should mention the diversity of the varieties of products. Russians pay attention to sourdough dishes while cooking. However, they also use unleavened dough. The fact that Russia is a country with an orthodox belief is also reflected in its cuisine. Vegetarian meals are consumed in the country. At the same time, Russians love meat dishes. The fact that there are too many seas on the coasts of the country has caused them to consume fish dishes too much. Also, ingredients such as poultry and kinds of seafood are quite common in the country.

So, do you want to find out what your next trip to Russia has in store for you in terms of gastronomy? We should research the foods that the local people like and seek an answer to the question of what food do they eat in Russia. In this blog, we will find answers to questions such as "what is the most popular food in Russia". Here are the 10 dishes you absolutely must eat in Russia.

Blinis are known as a kind of pancake. Russians prepare it very thinly and in large measure. This food is served with ingredients such as honey, cream, and jam. Russian people like to eat this dish every time. This dish can be a dessert or main course.

Historically an oriental dish, Pelmeni is among the most popular dishes in Russia. The word "pelmeni" consists of two words: the first is "pelnyan", which means "ear bread". The origins of the name of the dish also date back to the past. People living in Perm and Udmurtia named this dish.

This dish can be prepared with pork, lamb, or beef, and its nickname is Ural dumplings. However, some also use fish meat. You can even eat this dish in cheap restaurants in the Siberia region of Russia. This meal is also often prepared, not only in Russia but in all post-soviet countries.

The main content of this dish, which looks like ravioli in appearance, consists of mashed potatoes, eggs, and cheese. At the same time, the dish can be decorated with different fruits. This dish, stored frozen in the markets, is one of the most popular dishes in Russia and Ukraine. You can see this dish in Russian restaurants as well as Ukrainian restaurants.

The answer to the question of "what is the most popular food in Russia" is, of course, this dish. Borscht, an Eastern European dish, is considered by some to be the national dish of Russia. This dish is one of the famous Russian food which contains a lot of products, is similar in color to reddish-purple. The history of this dish dates back centuries. Even Alexander the Second and Catherine the Great were among those who ate this dish. This dish, which is consumed as a soup, must be beetroot. However, you can consume this soup as a meat dish or a vegetarian dish. This dish, which contains a lot of vitamins, includes ingredients such as carrots, onions, apples, tomatoes, potatoes, and cabbage. Other than that, you can also use garlic to enjoy the meal.

Along with Russian cuisine, Solyanka soup is a dish that is always included in Ukrainian cuisine. This dish is prepared with meat, mushrooms, and fish. At the same time, you can add flavor to the food by using potatoes and olives. The dish is especially fancied by Russian villagers. This soup is considered a great snack for vodka ldovers. Because when someone who drinks vodka eats this food, it reduces the possibility of getting drunk. The meal is consumed especially in the morning hours.

When someone asks you what food do they eat in Russia, you can say the name of this dish, which is popular with the name "Russian salad", is an indispensable part of Russian cuisine. Although the history of this dish dates back to the past, its secret is still unknown. The emergence of the Russian salad is connected with the French chef Lucien Olivier. It is argued that this dish was discovered in the 19th century.

The re-emergence of the Russian salad belongs to the Soviet Union period. This dish, which contains ingredients such as potatoes, eggs, carrots, meat, and parsley, has gained popularity as "Stolichniy salat". The most important feature of the meal is that it is always on the table during holidays, birthday celebrations, and New Year's Eve.

Pirozhki is a smaller version of Pirog. Pirojkis can be served both fried and cooked. It contains ingredients such as ground beef, cabbage, potatoes, and sometimes fruit.

Beef Stroganoff is popular not only in Russia but also all over the world. This dish includes beef tenderloin, mushrooms, onions, and smetana cream. The dish was named after Count Stroganoff, who lived in Odessa. When you travel to Russia, you should taste this world-famous dish.

Pickled cucumbers have been known in Russia for centuries. In Russia, there is a centuries-old tradition to eat vodka with pickles, and another tradition is to eat them with potatoes. This dish is one of the most famous Russian food.

The most expensive caviar in the world is beluga. These fish are mostly found in the Caspian Sea. This black caviar is only available at certain delis. Red caviar is much more affordable. You can find it in many grocery stores or restaurants. We advise you to try caviar with Russian pancakes.

Topics
Apply for any visa in two clicks!
Food, Hotel, Restaurant
Do you want to get a Russia visa easily?
Get your visa now 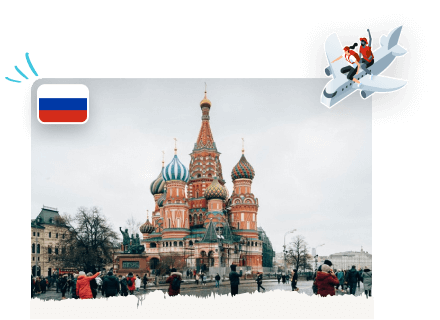