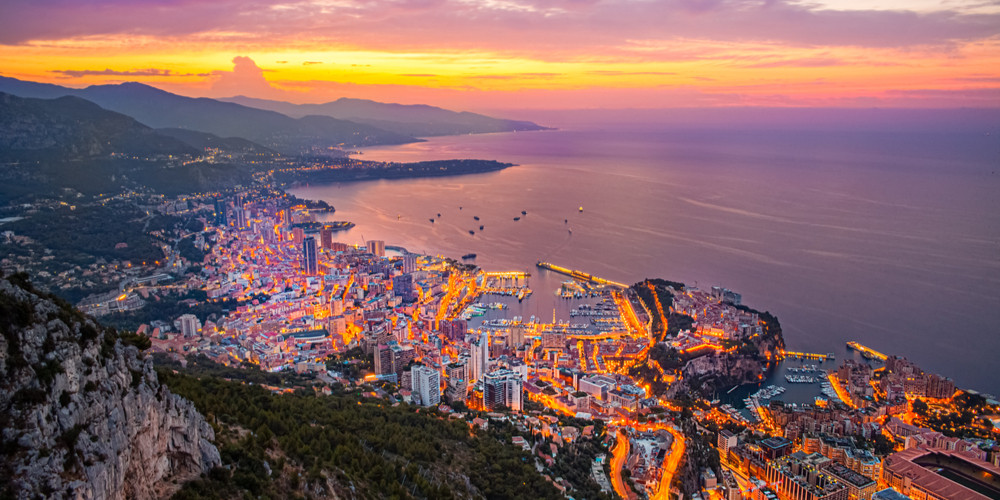 Beautiful and glistening On the French Riviera, Monaco is a tiny royal principality. It is probably the gorgeous small piece of land on the globe, measuring less than two square kilometres. So, what are some tourist attractions in Monaco? You will have the sight after reading this article. Stay with Pickvisa!

Monaco is a site of breathtaking natural beauty, with rich vegetation and warm weather typical of the Cote d'Azur. The landscape has a beguiling appeal with its deep blue water, elegant palm palms, and colourful flowers.

The high, rocky peninsula jutting out into the Mediterranean known as "Le Rocher" ("The Rock"), which includes old Monaco, also known as Monaco-Ville, is the most striking feature (or the Old Town). Monaco-Ville goes back to the 13th century when the principality was formed and is full of lovely small alleys and significant structures.

Many visitors flock to Monaco to partake in the allure of the French Riviera's extravagance as a Monaco France tourist attractions. With its luxurious five-star hotels, designer stores, luxury yachts, and expensive restaurants, Monaco is considered to have the highest per capita income in Europe.

Monaco is a popular day trip destination from Nice, which is only a 30-minute train ride away. Monaco, on the other hand, is an excellent location for exploring the Cote d'Azur.

Let's start with Monte-Carlo for major tourist attractions in Monaco. Monaco, despite its tiny size, is brimming with glamor and glamour. Monte-Carlo is the most abundant area, located north of Port Hercule and facing the bay in a wonderfully gorgeous location.

The balcony of Place du Casino offers spectacular views of the sea. The Carre d'Or (Square of Gold) area surrounding the Place du Casino is named for the streets dotted with high-end designer businesses and expensive jewellery retailers.

Monte-Carlo, being Monaco's richest neighbourhood, draws the affluent and famous. This area is full of Ferraris and "beautiful people." Monte-Carlo is a fantastic spot to go people-watching or to enjoy exquisite cuisine for tourists. Monte-Carlo is overflowing with Michelin-starred restaurants and elegant gourmet eateries.

Two beautiful boulevards, the Boulevard Princesse Charlotte in the west and the Boulevard des Moulins in the southwest, go through Monte-Carlo. There are several elegant shopping districts, including the Avenue de la Costa, which is lined with high-end stores. This district also includes the Opera House. All aforementioned places make Monte-Carlo to be placed in the number one top tourist attractions in Monaco!

Wandering through the Jardin Exotique is one of the major tourist attractions in Monaco. The Exotic Garden is a lush location with an astonishing diversity of plants and captivating sea views, perched on a high cliff overlooking the Mediterranean. The gardens are well maintained and run the length of the rocky slope.

Exotic plants from the Southwest United States, Mexico, South America, and Africa can grow here due to the pleasant weather and consistent sunshine. In this perfect climate, a wide variety of succulents, including gigantic cactuses, thrive.

The Exotic Garden also features a stalactite and stalagmite-filled Observatory Cave. Prehistoric people once lived in the area surrounding the cave. At 10 a.m. and ending an hour before closing, guided tours of the cave are provided every hour.

The stunning front of this neo-Byzantine church is made of white stones from neighbouring La Turbie. The Princes of Monaco are buried in the cathedral, which also houses the tombs of previous monarchs Prince Rainier and Princess Grace. This Cathedrale is among Monaco France tourist attractions where you should visit.

The sanctuary includes an altarpiece by the Nicois painter Louis Brea dating from 1500, even though the cathedral is relatively new (constructed between 1875 and 1884). The Episcopal throne, carved from Carrara marble, is another notable work of art.

The cathedral features a magnificent grand organ that is utilized for religious services and sacred music performances. From September through June, Mass is held every Sunday at 10 a.m., with music provided by the "Les Petits Chanteurs de Monaco" and "La Maitrise de la Cathedrale" choirs.

Except for religious services, the cathedral is available to the public (free entry). Visitors must dress appropriately; individuals wearing shoulder-baring tops, sleeveless tops, miniskirts, or shorts will not be admitted.

The Monte-Carlo Opera House is situated on the Place du Casino, an opulent public area in Monaco's most opulent district. This magnificent area is surrounded by palm trees and has an amazing fountain and a terrace with spectacular views of the coastline. The Opera House is a perfect fit for this magnificent setting and pulls most people in as one of the Monaco tourist attractions.

It was designed by Charles Garnier, the architect of the Paris Opera House, and completed in 1878. The "Salle Garnier," the Opera House's auditorium, is completely crimson and gold, with many complex bas-reliefs, magnificent paintings, and beautiful sculptures.

Sarah Bernhardt launched the Salle Garnier in 1879. Opera and ballet have captivated audiences in this city for almost a century, and the Opera House has hosted many world-class opera performers.

The Monte-Carlo Opera House provides a variety of musical recitals, concerts, and ballet events, focusing on classic operas. The Opera Season spans from October to April and begins with a Gala Opening event in September.

Monaco's waterfront La Condamine neighbourhood is centred on the city's main harbour and is backed by a spectacular cliffside. Between 1901 and 1926, the deep-water Port Hercule was built to offer a significant number of berths. There is enough berthing space for more than 500 ships. Many expensive shops, including the Prince's own yacht, are docked here.

At the Port Hercule port in Monaco, there is a renowned Yacht Club. The Boat Club of Monaco, located on Quai Louis II, has about 2,500 members (private yacht owners) from 73 countries. Prince Rainier III created the Yacht Club in 1953. The club sponsors regattas and yacht exhibitions, such as Monaco Classic Week, to maintain its high-profile reputation.

Fort Antoine is a military stronghold built in the 18th century on the outskirts of Le Rocher. The location has been converted into an outdoor theatre for symphony concerts and plays in French.

The panoramic view of the deep blue water reaching the horizon is the major incentive to visit this place, aside from witnessing a performance. From Fort Antoine, you can view the French Riviera's shoreline to Cannes, as well as Menton and Italy in the other direction.

When you look at Monaco tourist attractions map, you can find Palais du Prince, which takes a major place. The Palais du Prince, perched high above the sea on the beautiful peninsula of Le Rocher, is home to the world's oldest monarchy. After capturing the Republic of Genoa area in 1297, the Genoese aristocratic line of Grimaldi founded Monaco.

The location, originally erected as a Genoese castle in the 13th century, offers panoramic views and served as a defensive position throughout the Middle Ages. Throughout the years, the castle was rebuilt and turned into a magnificent Louis-XIV-style mansion.

The Palais du Prince is a private house with public access at certain periods of the year. The State Apartments are home to the Hercule Gallery, which features murals from the 16th and 17th centuries; the gilded "Blue Room," which is used for formal state occasions; the wood-paneled Mazarin Room; and the Empire-style Throne Room, which hosts official ceremonies and banquets.

The 17th-century Palatine Chapel and the Main Courtyard, with its magnificent 17th-century Carrara marble double stairway, are worth seeing. The Monte-Carlo Philharmonic Orchestra plays classical music performances in the main courtyard on Sundays and Thursdays in July and August.

Paintings, photos, theatre costumes, models of stage sets, decorative artefacts, and sculptures are among the museum's wide collection of 19th and 20th-century artworks.

This progressive museum is also committed to conservation efforts, such as the restoration of an antique doll from 1880 and historic theatrical costumes. The museum fosters learning across creative, cultural, and scientific fields by encouraging conversation between artists and academics.

Les Jardins Saint-Martin, located near the Musee Oceanographique and overlooking the calm blue waters of the Mediterranean Sea, would be an excellent accompaniment to a visit to the museum. A monument honoring Prince Albert I, a prominent marine researcher, can be seen in the gardens.

The Saint-Martin Gardens go along the coast around the peninsula of Le Rocher, which has a high slope that faces the sea. These spectacular gardens include a diverse collection of exotic plants and colorful blooms that thrive in the Mediterranean sun.

Finally, we are here - the last spot of top 10 tourist attractions in Monaco! The Musee Oceanographique is situated on Le Rocher, about 90 meters above sea level, in a magnificent setting. The museum and aquariums are built on huge foundations that took 11 years to construct in this spectacular location. It is one of the world's oldest aquariums, built in 1910 by Prince Albert I, H.S.H. Prince Albert II's great grandfather.

The tanks of the Musee Oceanographique are a highlight, with unusual fish and aquatic life in beautiful forms and hues. The Tropical Aquarium, Mediterranean Aquarium, and Shark Lagoon are the three aquariums. There are over 100 aquarium pools, each with a genuine natural habitat like coral reefs.

Lunch is served at the casual La Terrasse restaurant on the museum's rooftop terrace. The location, which offers spectacular panoramic views of the shoreline, is the major draw of dining here. It is possible to see to the Italian Riviera on a clear day.

So, That's all for Monaco. We try to answer the question "What are some tourist attractions in Monaco?". I hope you enjoy this article and find it useful. You can also visit our website - Pickvisa.com, and find important information about Monaco visas. Be safe and travel more!